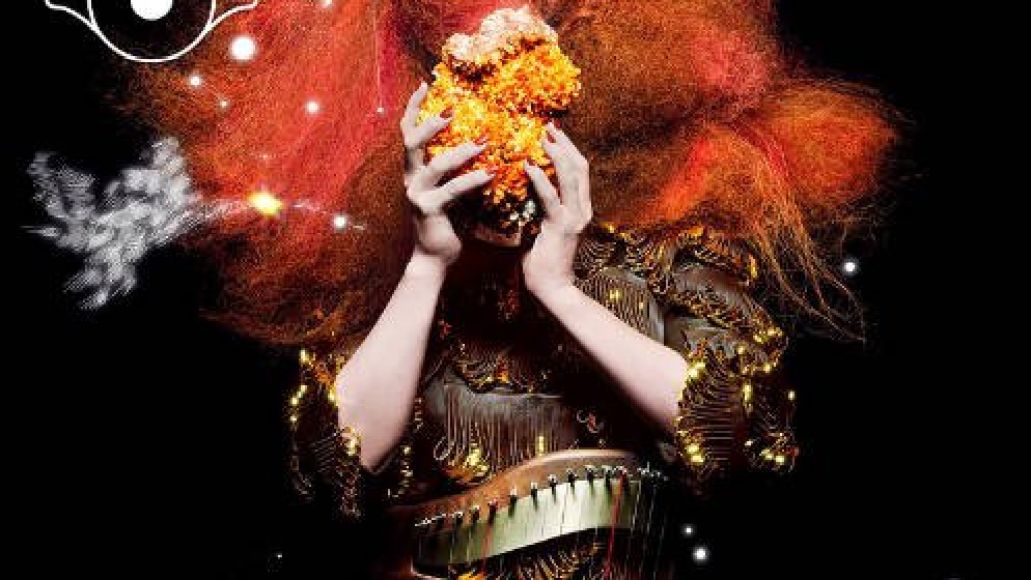 BjÃ¶rk is in the middle of her seven-date stand at the Manchester International Festival where she is offering an extensive preview of her forthcoming Biophilia. Below you can hear a recording of her performing the lead single, “Crystalline”.  Update: We now have clips for several other new songs including “Moon”, “Cosmogony”, and “Thunderbolt”.

Of course, the music is just one part of Biophilia, which is billed not just an album, but an extensive multi-media project. Speaking recently with Pitchfork, BjÃ¶rk revealed that the project will consist of a 10-song album as well as 10 corresponding apps for 10 songs, each which will feature “an interactive game based on the song’s scientific and musical subject matter” and which will allow users to manipulate the songs in different ways. There will also be a 90-minute documentary on the making of the project. And if that weren’t enough, BjÃ¶rk will “play six-week residencies in eight cities, all at intimate venues, to audiences of less than 2,000. At these performances, she’ll use the apps to perform Biophilia in full twice a week. During her residencies, the venues will also collaborate with local schools to host music-education workshops,” according to Pitchfork. For even more, check out Pitchfork’s interview, as well as similar discussions with Stereogum and Rolling Stone.

The Biophilia album is rumored to be released on September 26th via One Little Indian/Nonesuch. We’ll post additional details once they become available.

BjÃ¶rk still has four nights left in Manchester, so maybe you can get lucky on the UK equilivant of Craigslist. If not, then check her out at one of those yet-to-be-detailed six-week residencies, or at this year’s Bestival, where she was just added to a bill already featuring The Cure, Brian Wilson, PJ Harvey, Primal Scream, and more.