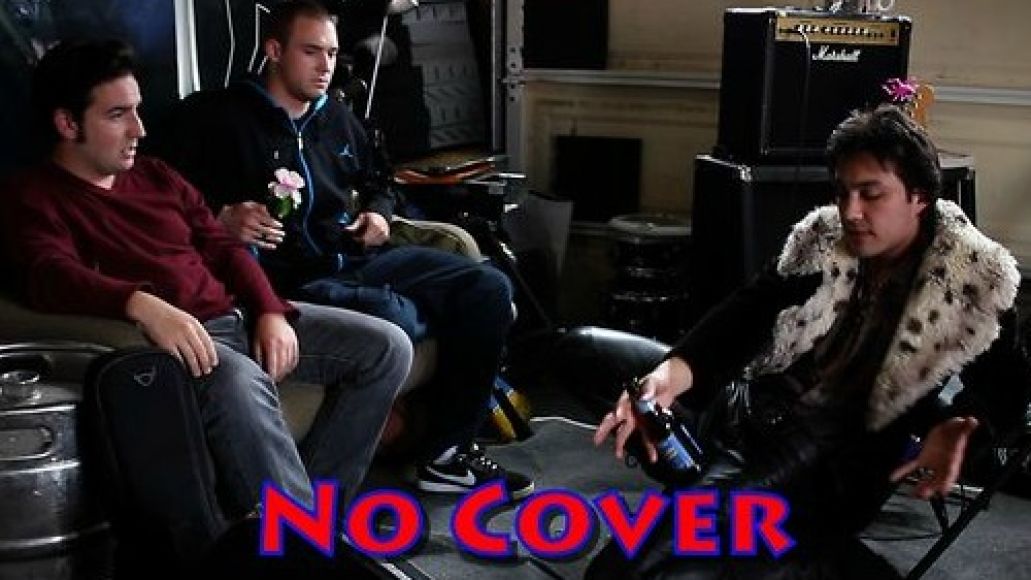 My name is Scott Robert Waldvogel. I’m one of the Executive Producers of No Cover, and I also play the band manager David on the show.

First of all, I’d like to thank everyone out there who contributed to the contest! We created this competition because we felt that the wide world of the internet could come up with a much better name for Randy and Marshall’s band than we could, and you all didn’t disappoint!

The cast and crew here at No Cover love that you all feel so passionately about the show. All five of the finalists (Future Stories, Huxtable Sweaters, Marshall and his Deputies, Not an Exit, and Rob Thomas Aquinas) would make excellent band names. But there can be only one.

Some of the many comments from No Cover cast and crew members, e-mails, and personal conversations:

(About Future Stories) Famous time-travelling future patriot John Lock once said, “Don’t tell me what I can’t DO!” We won’t john. We won’t. But our rock-hard band name might! -Tyler Vocelka (Joe)

I know this is totally bias, but I do really like Marshall and the Deputies… And we have alluded to the fact that he wears cowboy boots -Trevor Marcotte (Marshall)

i like exit and sweaters lol -Candy Maldonado (Sophie)

What if Randy starts naming shit around the room again, unbeknownst to marshal, and comes up with not an exit, and is totally shocked that Marshall likes it? That could work! – Tyler Vocelka (Joe)

Rob Thomas Aquinas has really taken off… I love that name, too. –Michael Roffman (President/Editor-in-Chief)

Huxtable Sweaters sounds like a good name for Randy to come up with. -Waldvogel (David)

I just voted in my pants. -Jay Bee (Fable)

Okay, I’m assuming that last one was about the whole field, but I could be wrong.

Either way, thanks to all of you for helping us out with the show’s finale! Because of some concerns with the voting system, all five names have been turned over to the production staff of the show, and together we’re going to sit down and choose the name that works best for the show, and our proposed second season. As you can see above, it’s going to be a bit of a horse-race.

AND… for all the finalists (regardless of the winner), send your contact information to nocoverproduction@yahoo.com, because for your creativity, your passion, and your perseverance, you each deserve a PRIZE! I can’t say what it is yet, but I can say it will be signed by members of the cast!

Thanks again to everyone out there, and we hope you will continue to watch our show! The two-part season finale goes live on August 3rd, don’t miss it, because at the end of part 2, we reveal the name we have selected!

Best of luck, and thanks again!

Update: We whittled it down to four names. Now it’s voting time. Use the widget below to vote on the name you think best fits Randy and Marshall’s band. C’mon, we’re almost there! Poll ends Monday at 11:00 p.m. CT.

Throughout life, there are several moments where phrases, certain paired words, and pronunciation all gel well together. And in some of those moments, you might look at your friend (or a passerby) and say, “That’d be an awesome band name.” It’s happened to countless bands in the past, and sometimes from the most basic things: street signs, screen names, public access television shows, hilarious sentences (for me, one friend has always suggested Underwater Basket-Weaving Eskimos), etc.. In a moment of clarity, one might be smart enough to write the name down, and use it for any future project. Other times, it’s forgotten within the memory banks of your brain.

Now though, the time has come to conjure up those band names….

Right now, on Cluster 1’s original show, No Cover, our heroes are in desperate need for a band name. Consequence of Sound, Cluster 1, and No Cover are giving you all the opportunity to lend them a hand. If Randy and Marshall don’t figure it out soon enough, then they may be plagued with a name like Sexplosion…and no band trying to be serious wants that name. And if your name rules enough, there are a few sweet prizes to award your creativity – including, you know, the actual name used in the show!

So here’s the deal, once you’ve left your thinking cap on long enough, re-visit this post, and leave your suggestion in the comments below. It doesn’t matter how insane they get, either. Considering how many names have been taken (thanks MySpace), uniqueness is encouraged. We’ll give you a week to respond, and then we’ll pick a group of finalists, to which all of you will vote on your favorite. Hurry up, though! Randy and Marshall have a gig soon, so they need your help!

And remember to tune into No Cover, every Wednesday, only on Cluster 1. Need to catch up? Start at the series premiere and move ahead! Or, if you’ve seen all eight episodes thus far, check out this week’s below: