Montrealers know how to have a good time. At least, if Parlovr (pronounced either “parlour” or “par-lover”) is any indication. Opening for Handsome Furs at Minneapolis bar the Triple Rock last night, the Montreal trio started their set with a “giant orgasmic scream” of which the audience was required to participate in. It didn’t stop, either. The ensuing roar built to “Hell, Heaven”, the half-title track off their 2010 EP Hell/Heaven/Big/Love, accenting a tight and quick set through and through. Rather unique were the glowing traffic light arrows that pointed to each member; each direction brought another line or two of witty commentary. Blame it on the intimacy, but the Triple Rock proved ideal for Parlovr, whose self-described “sloppy pop” worked well within the venue’s acoustics. In fact, it sounded almost better live than recorded; unfortunately, it also made Handsome Furs’ deafening, dance-tastic synths mildly painful. 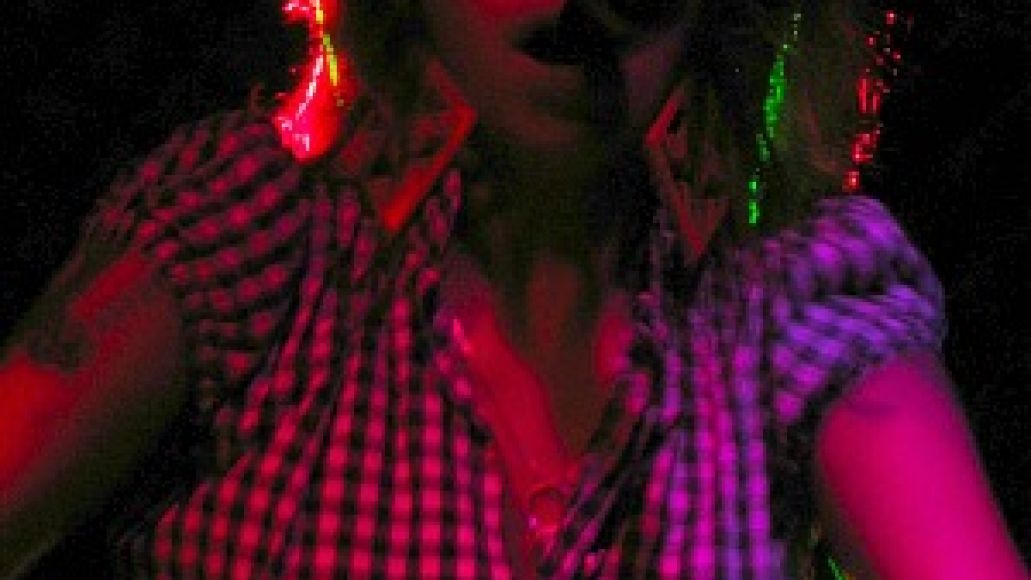 After Handsome Furs set up their own equipment—shocking!—they excused themselves for a cigarette. When they came back, they punched in the telltale handclaps of “When I Get Back”, the first track off their release of just a few months ago, Sound Kapital. From there, they went through the album with just a few detours to play “Radio Kaliningrad” and “All We Want, Baby, Is Everything” off their sophomore release, Face Control. Anecdotes about almost getting gored by bison lightened the duo’s intense performance, during which Perry often hit the deck clutching her heart after each song’s final, resounding synth hit. “Bury Me Standing” warmed the audience up for Sound Kapital’s most emphatic tracks back-to-back, ending with “Repatriated” and a kiss between Boeckner and Perry. “We’re not very professional,” Perry said. “Apologies!” No one seemed to mind, especially since the duo made sure to praise and thank the audience frequently.

At one point, Boeckner jumped into the fray, dancing with several people in the front row. But closing with “Radio Kaliningrad” and “Fuck the Police” (read: “Serve the People”) wasn’t enough. After a blessed 15 seconds offstage, they returned to punch out “No Feelings” for the encore. “We’re tired, so we’re going to bed,” Boeckner said. They are married, after all.

Setlist:
When I Get Back
Damage
All We Want, Baby, Is Everything
Memories of the Future
Bury Me Standing
What About Us
Repatriated
Radio Kaliningrad
You Don’t Serve the People
Encore:
No Feelings