Armed with perhaps the most quintessentially border-defying success story of our time, Tinariwen are the poster band for that old saying about music being the universal language. Born out of the Sahara Desert in response to the oppression their native Tuareg people faced at the hands of the Malian elite, the fully self-taught, self-contained collective (whose members vary from the five who played last night at the Troubadour to 10 or so regular studio contributors) have transcended the novelty of that dreaded Whole Foods/ “world music” tag, while winning the acclaim of audiences, critics, and fellow musicians (ranging from Henry Rollins to Robert Plant) alike. Rather than nestle in the comfort of their almost-too-good-to-be-true fairy tale backstory though, Tinariwen have earned a reputation as one of the world’s best live bands, opening up for the Rolling Stones a few years back and being joined onstage by Carlos Santana between stellar sets at Coachella and Glastonbury. They were also, interestingly enough, hand-picked by Jeff Mangum as part of his curated ATP fest this December– and all this while releasing a steady stream of very solid material, with a new album, Tassili, out this August that features guest spots from Kyp Malone and Tunde Adebimpe of TV on the Radio and Nels Cline of Wilco.

The mere idea that a band of West African tribal revolutionaries could inspire the sort of fan-hood that they have, headlining and selling out a club in West Hollywood with freedom jams sung in their native Tamashek (a blend of Berber, Arabic, and French spoken by no more than 1.3 million people worldwide) is fairly mind-blowing. The unenviable job of setting the stage for them was filled by Josh Klinghoffer (perhaps best known as the Red Hot Chili Peppers’ latest addition on guitar), who got feet moving early with an eclectic all-vinyl DJ set that dipped deep into a wide range of music. Extra cheers for throwing in Dr. John’s demented rave-up “Danse Kalimba Ba Doom”. 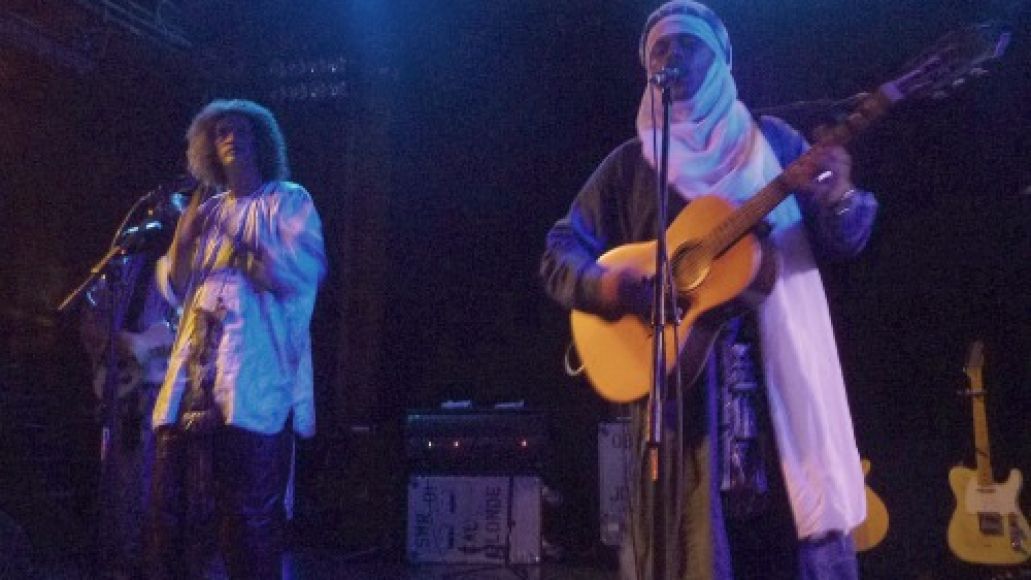 Tinariwen’s five members took the stage to wild cheers and raucous applause, positively glowing at the warm welcome before launching into their set. Early word on their upcoming full-length, their fourth proper studio release, is that it’s fully acoustic, a marked departure from the electric-heavy desert blues they’ve cut over the years. The outfit’s striking bandleader Ibrahim Ag Alhabib switched off on acoustic and electric guitars with Abdallah Ag Alhousseyni, cutting a stately figure as he lead in a world-weary baritone that instantly called to mind a desert Nick Cave of sorts, with the tight, grooving band behind him as his Bad Seeds.

It was a true blessing to hear and see the band — an act who I’ve seen tear shit up at Coachella and the cavernous Hollywood Bowl — in such an intimate setting as the Troubadour. Eyadou Ag Leche and Said Ag Ayad, on bass and percussion respectively, were one of tightest rhythm sections I’ve ever seen, with the latter’s pounding rhythms (all on played on hand drums, no less) along with Ag Leche’s taut bass groove making it near impossible to stand still. Ending their 90-minute-plus set and its subsequent two-song encore with a group bow and polite mercis all around, Tinariwen proved why they’ve earned a reputation as one of the world’s most entertaining acts; their performance was a true testament to the universal power of music.