One thing’s for certain, Bon Iver has come a long way since its rather humble beginnings. It would be an easy claim to make, just by listening to the band’s latest LP, Bon Iver, but in witnessing the live show, it’s a hard truth to even imagine escaping.

With a stage setup that looks more like Earth, Wind, & Fire than a bedroom folk artist, the new Bon Iver show is something truly awe-inspiring to behold. In the time since 2008’s For Emma, Forever Ago, Justin Vernon has turned Bon Iver into a pristine unit of post-everything instrumentalists, digging up sounds from Talk Talk records and Peter Gabriel songs to craft music that exists on its own plane of beautiful badassery. He has done it all without losing any of Bon Iver’s calling cards, either. He’s maintained his mystifying, yet approachable, aura, his dense lyrical sentiments, and, of course, his gut-wrenching falsetto, but has opted for looser song structures and heaps of auxiliary instrumentation and texture.

With so many sounds at their disposal, the nine players that go by Bon Iver collectively encase audiences in a snow globe of ethereal swells. Sounds drift around Vernon’s burly honey-sweet coo as if every genre of music snows down from the sky and magically orbits the bearded Wisconsinite. Colin Stetson’s brass erupts in a syncopated blast, all sorts of horns and woodwinds flutter in and out of consciousness, strings find their way inside, synthesizers drift along, and whatever else you can dream up creeps in too (even beatboxing). You’re lost in a flurry of delicate brass one minute, then the amps squeal and moan and you realize you’re at a noise-rock show the next. If Bon Iver is indeed some sort of place, as Vernon has suggested countless times in interviews, these guys have certainly taken us there.

After an intriguing set of brooding dreampop from North Carolina’s The Rosebuds (the lead singer of which plays alongside Vernon in Gayngs), Vernon and his army of brass, strings, and percussion processed onto 9:30 Club’s stage. It began the only way it really could, with the latest album opener, “Perth”. The song’s rolling post-rock guitar line slid into the sea of rhythm and lush brass with utter perfection. 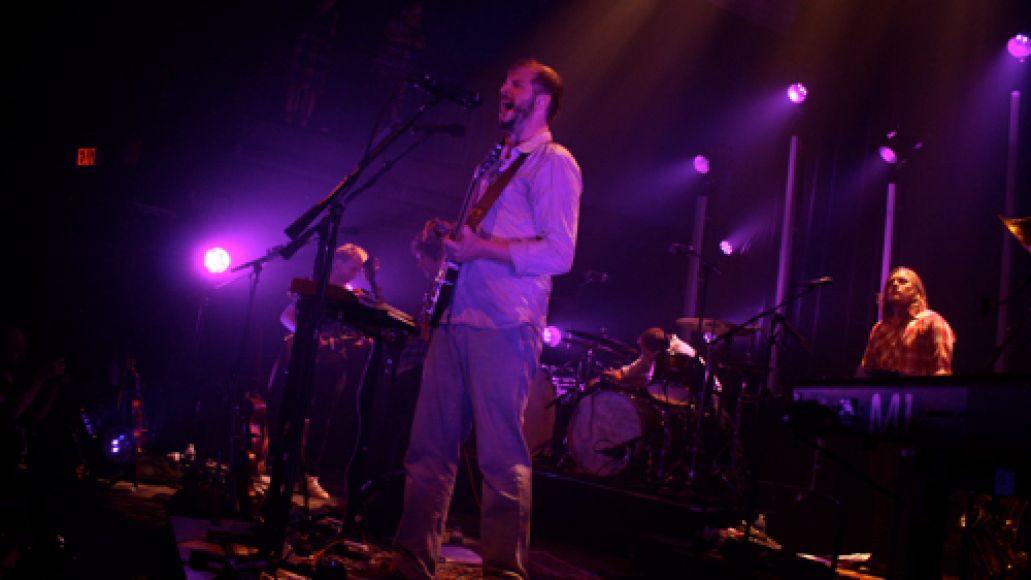 Vernon stuck to note-for-note renditions of new material for a bit, somehow bringing a feeling of spontaneity and raw passion to the highly orchestrated pieces. It was all so beautiful and perfect, without sounding highly rehearsed, either. It’s what makes Vernon so good at what he does.

Early on, Vernon brought out two selections from the Blood Bank EP: a noised-out rendition of the titular track, fit with a screeching guitar solo, which saw Vernon fall to his knees, and a solemn “Beach Baby”. Then it was back into the new stuff, before a characteristically lush “For Emma” gave us the first taste of that record. It was slightly reimagined, with subtle changes in brass arrangements, and reminded us of how gorgeous of a record that, too, was. 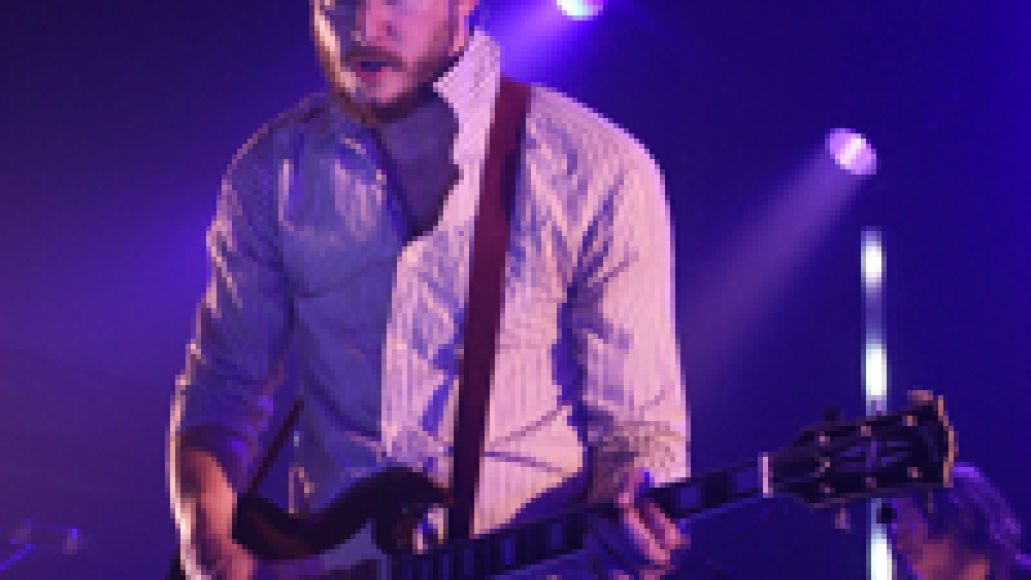 The instrumental army left a solo Vernon to drag the tears out of our eyes with a gorgeous, “Re: Stacks”, the cryptic lyrics of which felt particularly haunting in the 9:30 Club’s silent, awestruck air, with Vernon wailing away over his sparse electric strums by the song’s end. His full-bodied croon filled the open space its piercing counterpart had just cut a hole into.

A few songs later, “Beth/Rest” really argued its case. The song’s difficult rhythms, Framptonized vocals, and overbearing synthesizers exploded into a wall of noise that gave Vernon every reason to un-ironically throw his fist up in the air as the song began.

A typically joyous, fraternal rendition of “Skinny Love” had the whole band singing (and stomping) along to close out the set. But it was the encore that left the most lasting impression, a frenetic cover of BjÃ¶rk’s “Who Is It?” (fit with beatboxing and a string section) and a volatile “Wolves”, which saw the whole crowd wailing uncontrollably at the song’s ear-splitting climax, as Vernon instructed earlier. It was impossible not to join him in a cathartic howl, as he took us to the last stop in a place we’ve all come to know and love as Bon Iver. The energy was as thick as Vernon’s scruff.