Dusty, reunited UK export Bush arrived in Chicago last night, unloading a pocket of hits and a trio of new tracks at the 85-year-old Congress Theater. Sponsored by Samsung/AT&T, the gig was free to patrons who RSVP’d online ahead of time. As a result, thousands of fans littered Milwaukee Avenue early in the evening, clutching on to their printed tickets as they gazed around in a summer-spoiled stupor. The uniform of choice was black. Lots of black.

Chevelle opened. That’s about it.

Twenty minutes later, Gavin Rossdale and drummer Robin Goodridge strolled out, alongside guitarist Chris Traynor and Bush newcomer bassist Corey Britz. Having played with Rossdale since Bush last toured in the early ’00s, Traynor could questionably be considered a longtime member of the band, but it’s hard to ignore the lack of Nigel Pulsford, whose presence remains sorely missed. Traynor has the chops to replicate key moments in hits like “Machinehead”, “Little Things”, and “Comedown”, but when it comes to his own signatures, like say on NHL 12 hit “All My Life”, therein lies the mystery: Where’s the finesse? 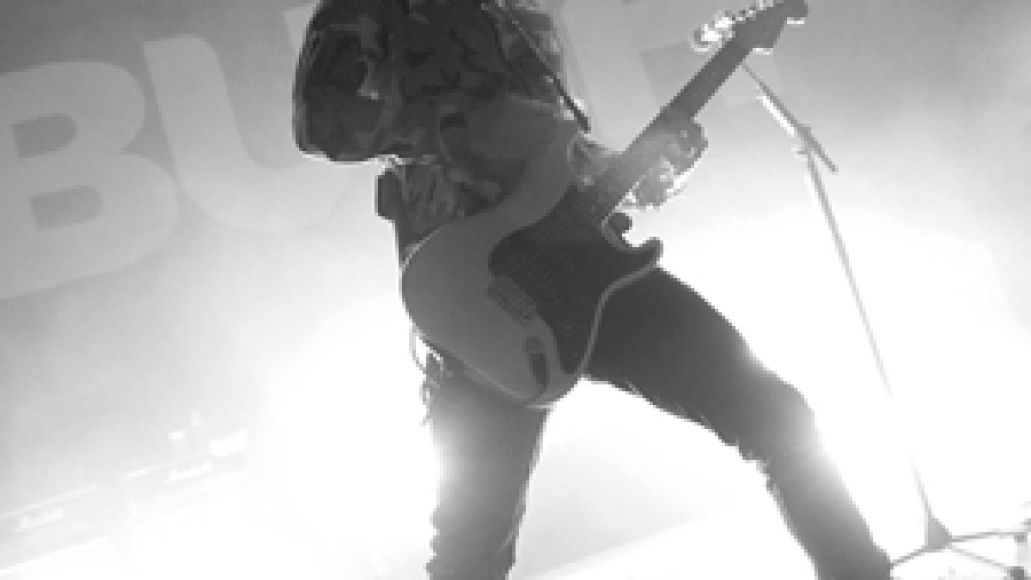 Admittedly, newer material like “The Sound of Winter” and last year’s “Afterlife” sounds better live than on record, but it does stir up some skepticism for the group’s forthcoming fifth LP, The Sea of Memories, due out next month. Quality aside, Rossdale thrives on the shiny rhythms, which translates into an engaging stage show – especially with the oldies. During “Little Things”, the grungy poster boy stepped into the crowd, belting out the classic hit’s breakdown amongst diehard fanatics. To add some charm, he tossed in a few lines of Talking Heads’ “Once In a Lifetime” into the bridge of “Everything Zen”, which added a nice little spin. Very cool.

What wasn’t cool, however, was a lame rendition of The Beatles’ “Come Together”. In the past, Rossdale has injected his own unique grit to many covers – especially one dynamite cut of The Cars’ “Just What I Needed” or a moody re-imagining of Joy Division’s “In a Lonely Place” – but this just came off as forced and above all unnecessary. Why leave out material off 1996’s highly underrated LP Razorblade Suitcase in lieu of a wasted classic-turned-nu-metal-anthem? “Swallowed”, “Greedy Fly”, or even something culled from 2001’s Golden State would have sufficed. Nevertheless, you can’t really complain about a free show, and from the sounds of it, Rossdale & New Co. still make post-grunge rock feel sexy and hip – even for a glimpsing 50 minutes. That’s more than Billy Corgan can say these days.

Setlist:
Machinehead
All My Life
Little Things
The Chemicals Between Us
Afterlife
Everything Zen
The Sound of Winter
Glycerine
Come Together (Beatles cover)
Comedown
——