Even the most die-hard of Cubs fans will agree that Wrigley Field has seen its better days. With a team that’s lost 65 games in its current season, a second-to-last placement on the power rankings, and a shift in management, suffice it to say, the neighborhood ballpark hasn’t had the greatest time this past year. But if there’s one bright spot in the Cubs’ 138th season, it’s that they let Sir Paul McCartney entertain Chicago for two warm summer nights in their home. Hey, someone’s gotta do it.

And boy did he get the job done. Over 35+ songs, McCartney – or, Macca, if you don’t mind the brevity – razzled and dazzled a crowd ready to soak up classic rock ‘n’ roll. But, let’s be real, this isn’t standard rock ‘n’ roll. Now, it’s usually taboo for writers to parade around ultimatums, but here’s one most can agree on: Everyone knows The Beatles. Some might not recognize the (infamous) medley from Abbey Road, but it’s highly unlikely a tune like “Hey Jude” or “Yesterday” would whizz past them without ringing even one bell.

That’s what made Sunday night’s Wrigley gig so fascinating. What other band, or artist, holds this much weight in people’s hearts or minds? What other concert could you attend where every soul present could actually belt out the lyrics? Not many and especially not of this magnitude. As a result, you had an artist working with a rare energy, and McCartney knew this. Following a punchy opening of “Hello Goodbye” and “Junior’s Farm”, the former Beatle smiled in front of his rabid audience — one which held signs reading “Hug my wife so she’ll shut up” and “I’m a priest, let me do your wedding” — and stated amicably, “I’m getting a feeling we’re gonna have a good time tonight.” 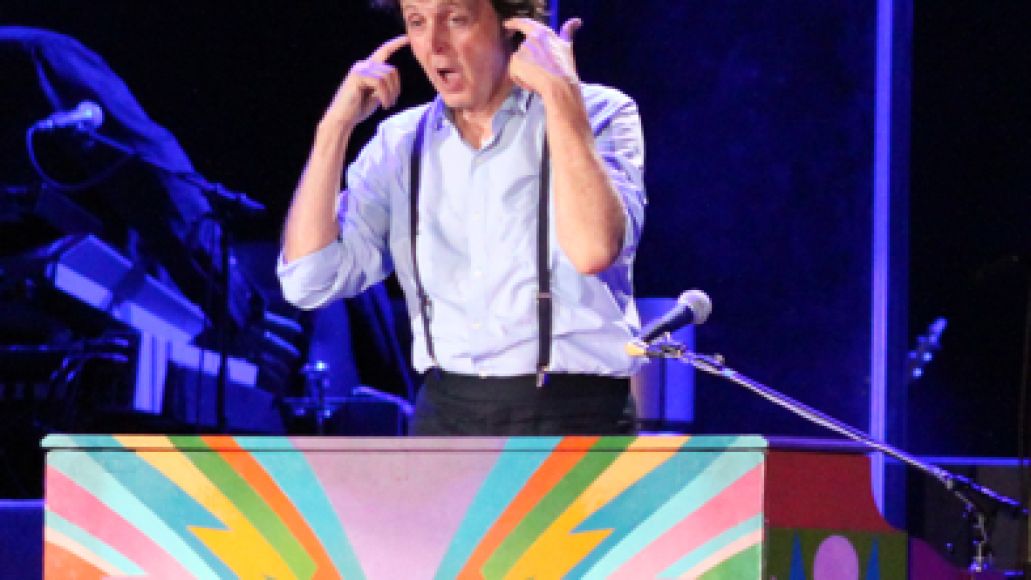 Fact. Whether it was through enraged pyrotechnics (“Live and Let Die”) or odes to past friends (“Here Today”), McCartney put together the trademark qualities of a stellar arena rock show, and then some. Despite the lack of intimacy – c’mon, it’s a baseball stadium – he still managed to personalize things some. Through little anecdotes, McCartney let his fans into his world, digressing on recent stories (“I Will” and its connection to this year’s royal wedding) and tales of yesteryear (playing “Something” on the uke for George Harrison, which he then performed for us). One humbling moment surfaced early on, when McCartney revealed how lucky he felt to be playing at the historic ballpark, concluding, “Right now, I’m going to take a moment to drink in some of that Wrigley magic.”

But he added some magic of his own: Behind a multi-colored piano, seemingly borrowed from Elton John, McCartney crooned verse after verse of “Hey Jude”, climbing higher and higher with each turn. Sticky air permeated through thousands of swaying arms as everyone sang along. Then, the drop off arrived and the chorus ensued. That aforementioned, rare energy collated into one awe-inspiring melody, which rang loud and free. Call it an early estimate, but there’s no doubt those echoes will absorb in the very hallways and dugouts that harbor the ghosts of Harry Caray and Charlie Grimm. Perhaps some good vibrations to crack the curse. One would hope.

Setlist:
Hello Goodbye
Junior’s Farm
All My Loving
Jet
Drive My Car
Sing the Changes
The Night Before
Let Me Roll It
Paperback Writer
The Long and Winding Road
Nineteen Hundred and Eighty-Five
Let ‘Em In
Maybe I’m Amazed
I’ve Just Seen a Face
I Will
Blackbird
Here Today
Dance Tonight
Mrs. Vandebilt
Eleanor Rigby
Something
Band on the Run
Ob-La-Di, Ob-La-Da
Back in the USSR
I’ve Got a Feeling
A Day in the Life/Give Peace a Chance
Let It Be
Live & Let Die
Hey Jude
Encore #1:
Lady Madonna
Daytripper
Get Back
Encore #2:
Yesterday
Helter Skelter
Golden Slumbers/Carry That Weight/The End
——