After seeing Swedish trio Peter Bjorn and John perform last night at Minneapolis’s First Avenue, I learned that Scandinavians do, indeed, have a sense of humor. “This is like comedy,” Peter Moren commented after several failed attempts to begin “Paris 2004” with a harmonica riff. He won over an impatient audience by referencing Bob Dylan, which earned an approving roar eclipsed only by the chants of “P-B-J!” for the encore. The band began with “Tomorrow Has to Wait” off of their latest release, Gimme Some, and steadily ratcheted the caliber of their performance as the show went on. When playing “Macabre” and “Breaker Breaker”, it seemed like Moren and the rest of the band were just going through the motions, however tight and energetic. After “Paris”, however, Moren hit his stride. As in, the man shredded so hard he broke two strings on his guitar. 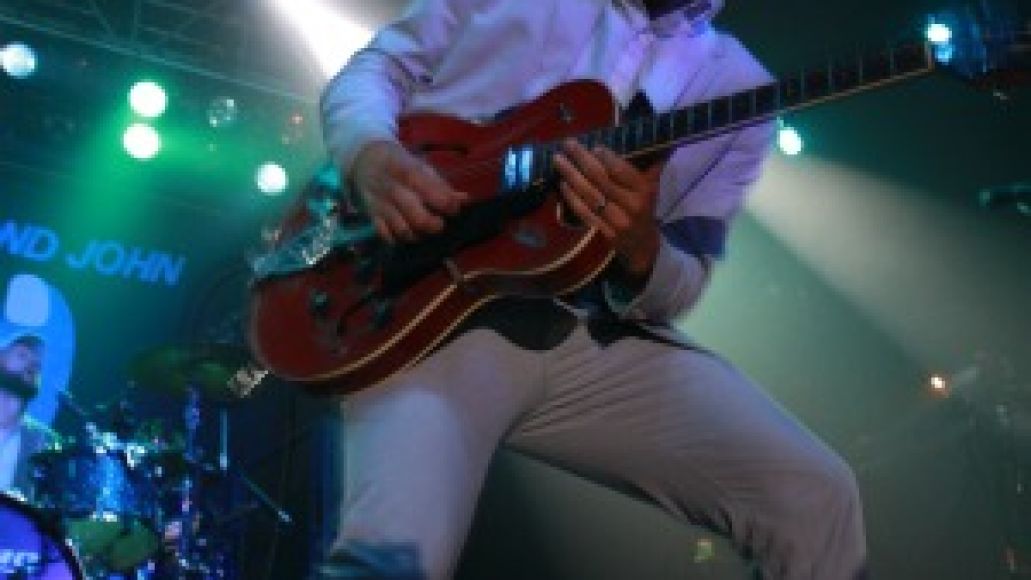 During “Young Folks”, Moren climbed offstage and into the audience, briefly standing above them on a low wall. He repeated the performance during “Nothing to Worry About” off of 2009’s Living Thing, ripping blues-y harmonica riffs in the midst of a roiling audience. That’s not including his bunny hops and scissor kicks onstage. PB&J played a good mix of songs, generally sticking to their newest material but also going back to “oldies but goodies.” (I was hoping they would play “Amsterdam” during the encore, but instead they chose “Objects of My Affection”. I suppose it’s an acceptable substitute.) Honestly, it doesn’t matter: I was so blown away by their rendition of The Strokes’ “Is This It?”, off the Is This It? covers compilation Stroked, that I wouldn’t even have needed an encore.

Opening local act BNLX, Ed and wife Ashley Ackerson’s noise-rock project, tried to be a hard act to follow with three screens flashing checkered lights and smoke machines. Their best-known hit “Blue and Gold” softly stood out during a throbbing set I felt more in my chair than actually heard. It’s impressive that the Ackersons create such walls of noise with just a laptop, bass guitar, and electric guitar, but I wished for a real drummer’s improvisation. Fortunately, Peter Bjorn and John’s adorably spontaneous act more than made up for it.