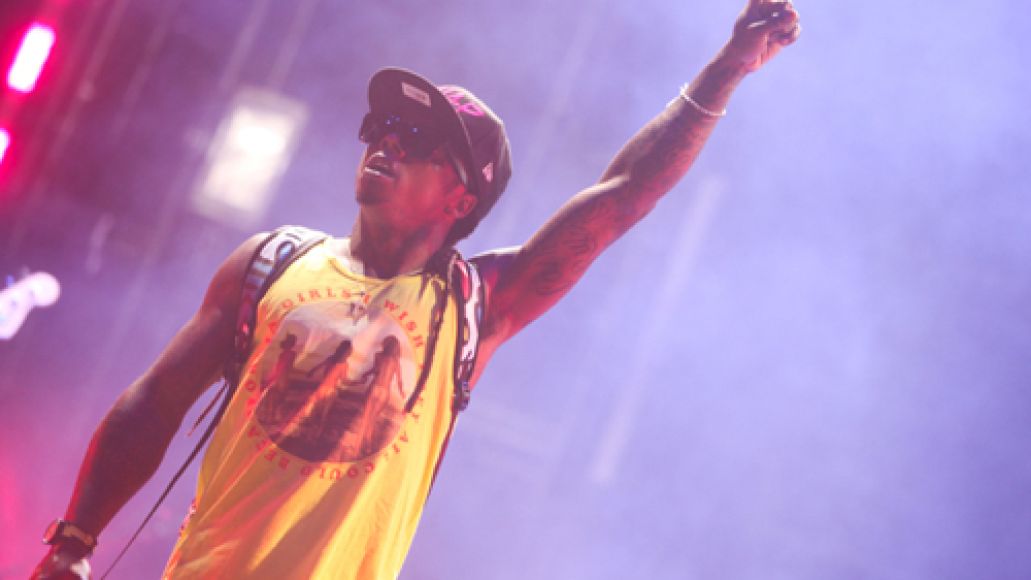 It’s sort of a confusing time for Lil Wayne fans what with the MC’s long-awaited Tha Carter IV getting less-than-stellar reviews. Logic used to hold that when a new chapter in Tha Carter series dropped, it would immediately change the game. Sadly, that’s not the case, and we as fans and chroniclers of Tunechi have to live in this brave new world where Wayne may really not be the Best Rapper Alive.

But don’t fret, truly faithful Wayne-lytes, for it doesn’t have to be a time of sorrow. Instead, we can take this downtime to appreciate the Weezy we know and love by looking into his back catalogue and mining up some gems to make us remember why we loved the sizzurp-drinking Martian in the first place. That reason isn’t his talents on the mic (though he has that in spades), nor is it the sheer number of his releases (though that figure is staggering) or his loads of charisma that abounds each time he drops a verse. No, what we love most about Weezy F. Baby is how unbelievably and undeniably crazy he is. And not like, “He’s so crazy; he parties like ALL day.” We mean, “He’s legitimatley in need of some kind of psychiatric treatment.”

Don’t believe us? The proof is in our list of the 25 Most WTF Lil Wayne Lyrics. From his debut album Tha Block Is Hot all the way up to Tha Carter IV, we’ve logged the very best instances of Wayne’s lyrical insanity. From the unintelligible to the just plain weird, these are concrete proof that when Wayne opens his mouth, kooky shit follows. But don’t consider this a condemnation of the MC. Instead, we look at these offerings as proof of what makes Lil Wayne truly unique and, hands down, one of the best in the game. It’s also a way to understand the shift that occurred in Tha Carter IV and get a sense of where Wayne may be headed next.

So, sit back, relax, and enjoy what we think defines Wayne’s complete disconnect with reality. Oh, and here’s hoping for much more with Tha Carter V. 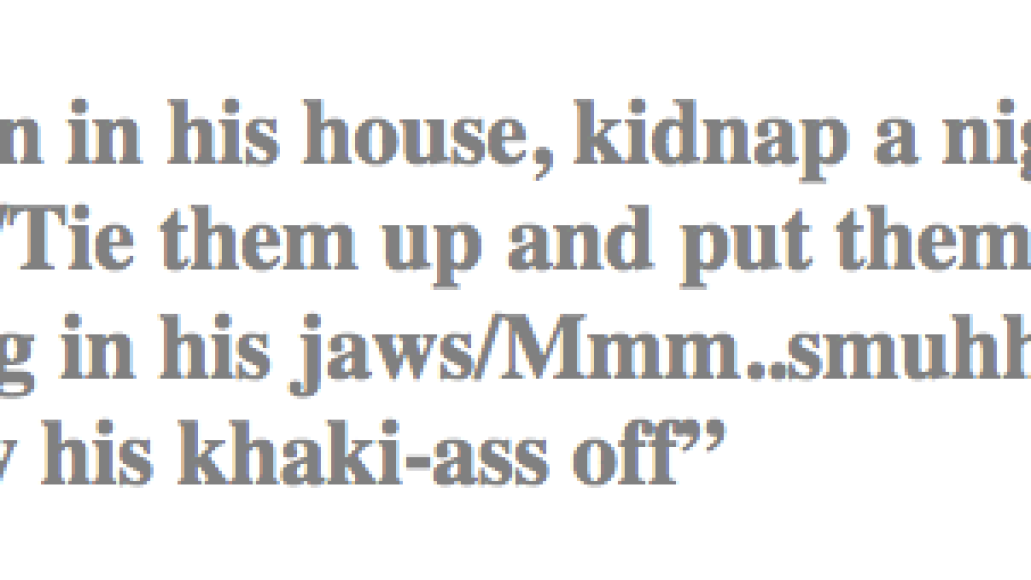 Song: “Tha Block Is Hot”
Album: Tha Block Is Hot
What CoS Says: This earliest line is far from the most WTF; in fact, it might be the most normal. It does, however, give some nice career perspective: Wayne got batshit weird real quick like. 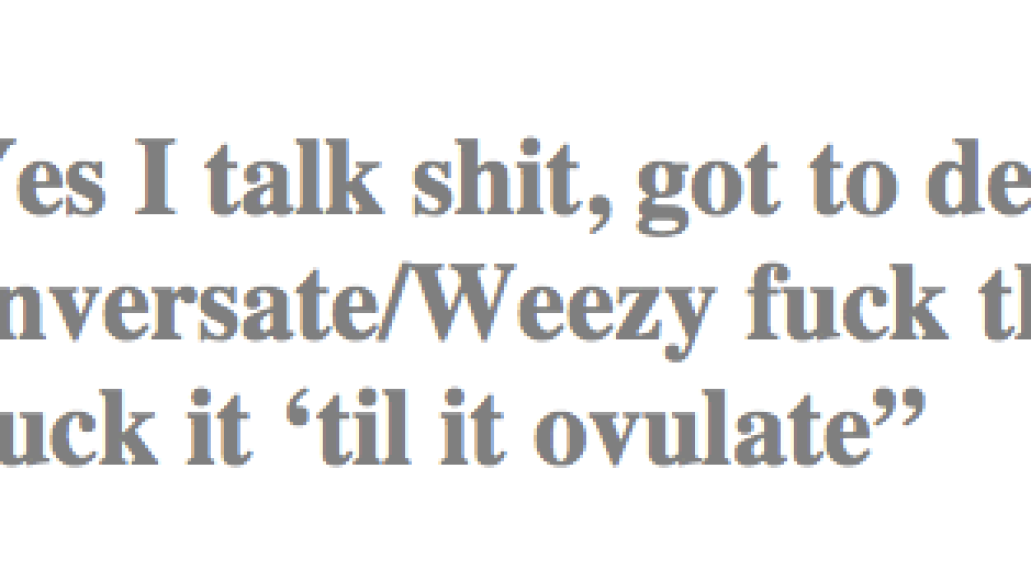 Song:“Bill Gates”
Album: I Am Not a Human Being
What CoS Says: A medical lesson for you, Mr. Carter: a healthy woman ovulates on a monthly cycle, regardless of how frequently she has had sex and how long the aforementioned sex has lasted. 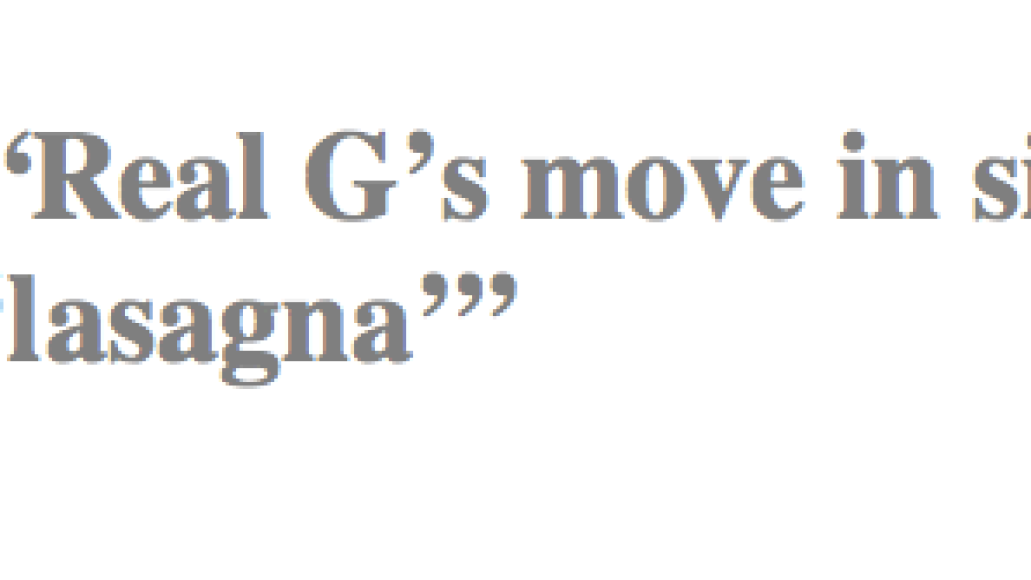 Song: “6 Foot 7 Foot”
Album: Tha Carter IV
What CoS Says: Oh, because “lasgana” has a silent G in it. No one gets it first time around. 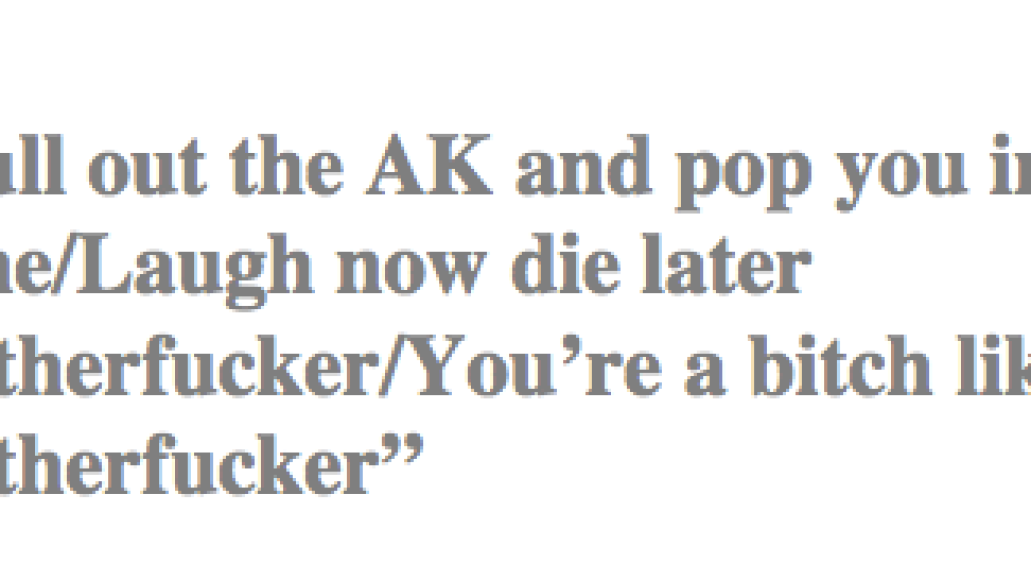 Song: “Gonorrhea”
Album: I Am Not A Human Being
What CoS Says: Zeta Phi Beta girls are sweet as molasses! Now if he would’ve said Chi Omega, I would have believed him. 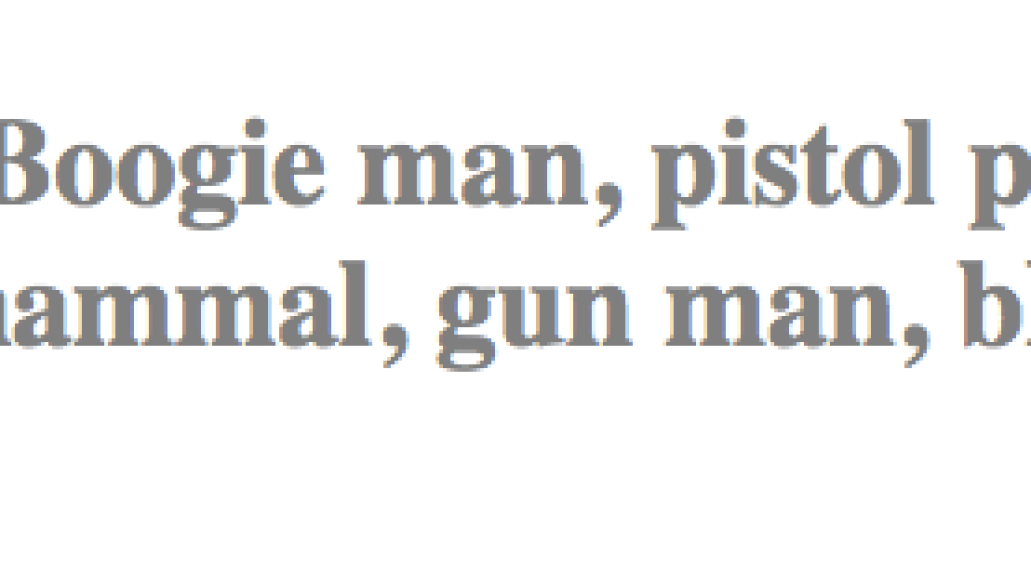 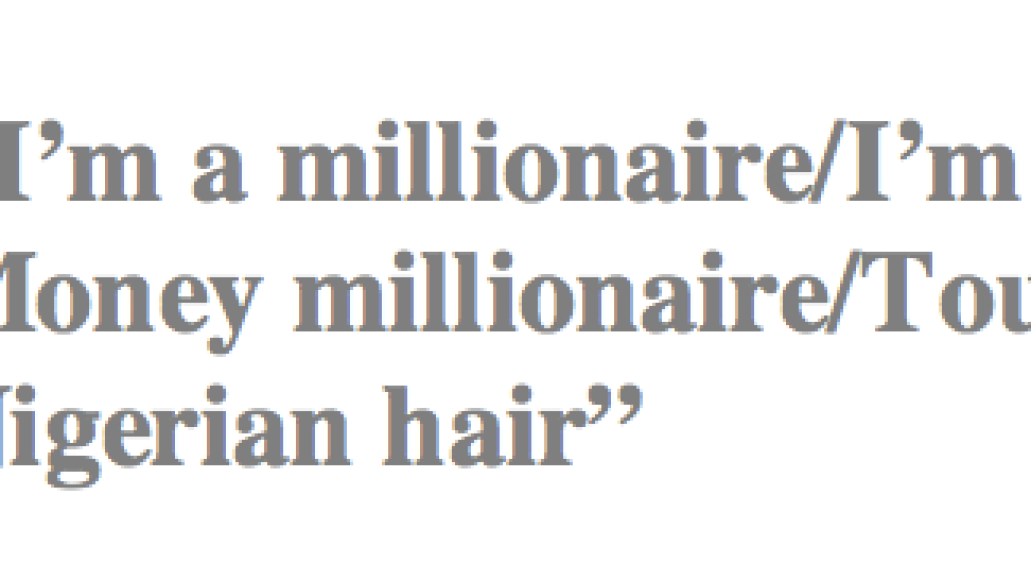 Song: “A Milli”
Album: Tha Carter III
What CoS Says: You’ve gotta be that tough if you’re that crazy. 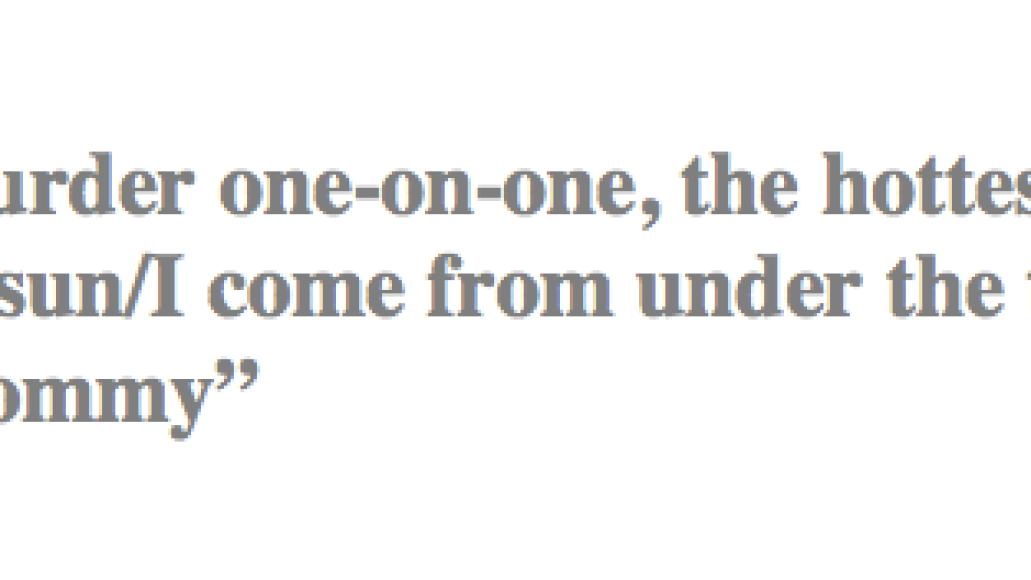 Song: “Go DJ”
Album: Tha Carter
What CoS Says: Left the womb carrying a firearm, huh? It’s all starting to make some sense. 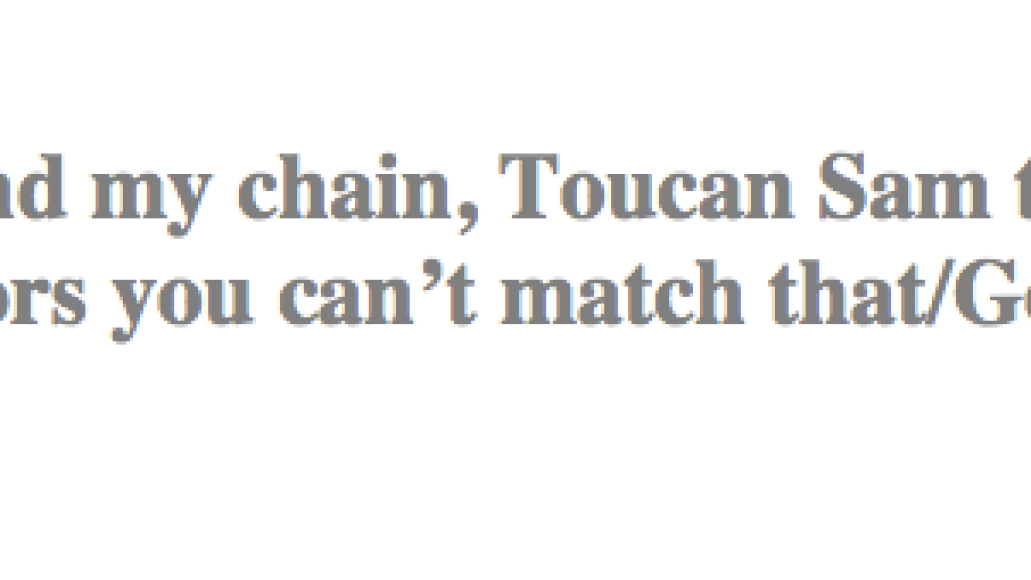 Song: “Fireman”
Album: Tha Carter II
What CoS Says: Between the second and third lines, it’s like he anticipated the question, “So, why are you comparing your chain to a cartoon parrot that sells cereal?” 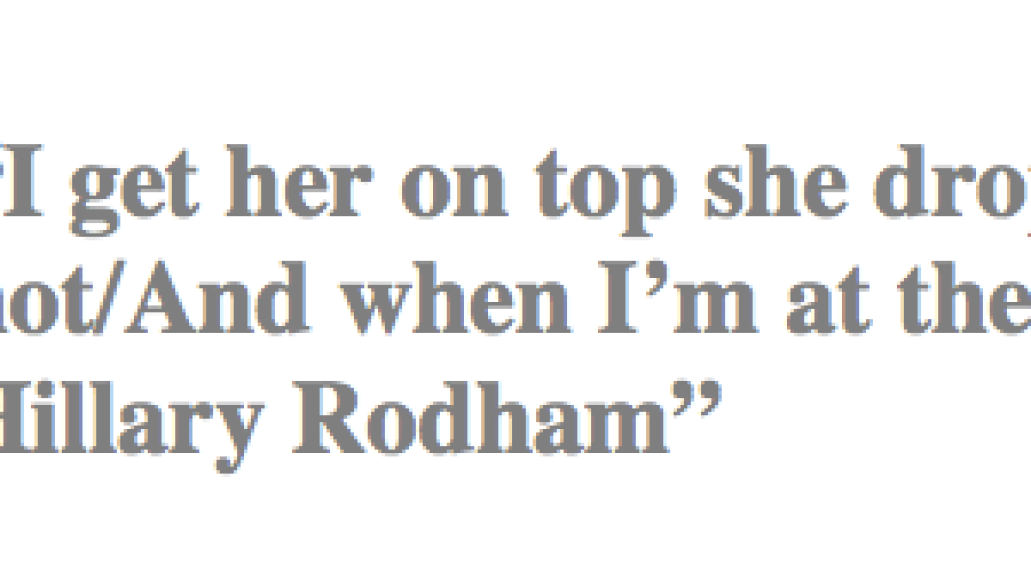 Song: “Lollipop”
Album: Tha Carter III
What CoS Says: I’m sure that there’s some Freudian aspect to enjoying a woman on top and in charge sometimes, but I feel that having sexual visions of a domineering Hilary Rodham is a bit far. Sizzurp’s affect on the human psyche, probably. 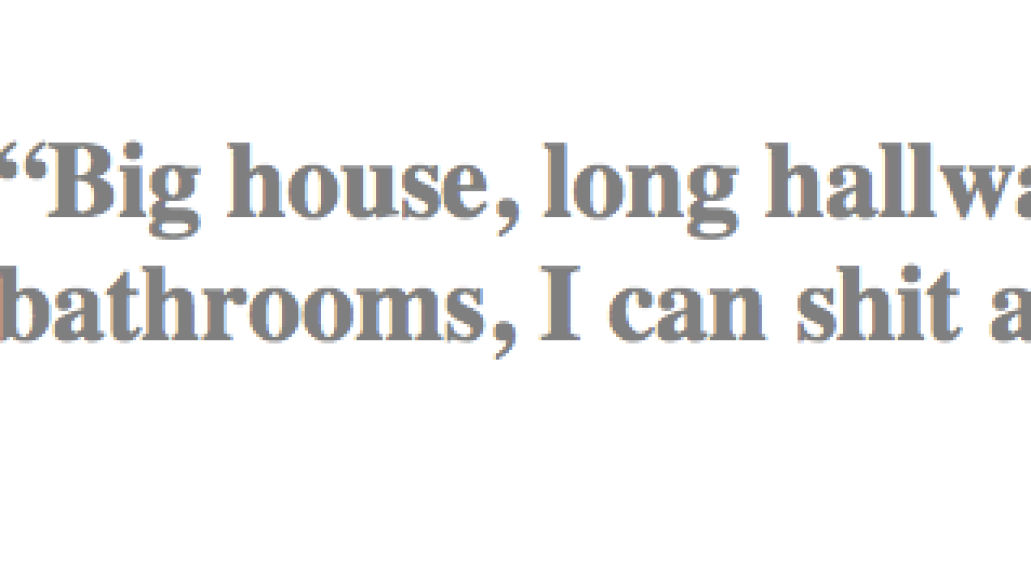 Song: “We Be Steady Mobbin’”
Album: We Are Young Money
What CoS Says: Some rappers talk about thrones of gold. Wayne marks success with a porcelain throne. 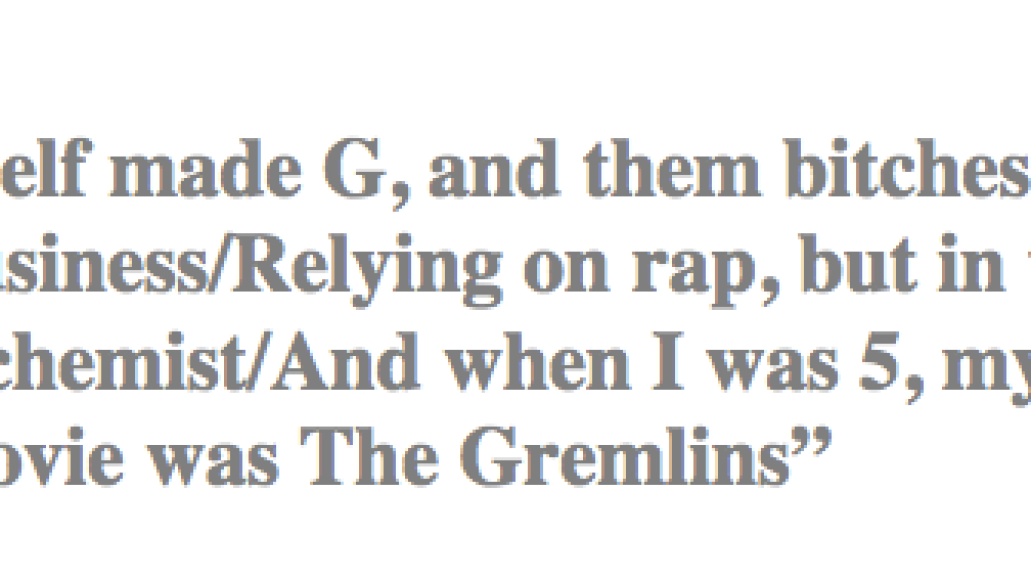 Song: “Sky’s The Limit”
Album: Da Drought 3
What CoS Says: In Wayne’s early attempts to be emotionally open and vulnerable, he achieves levels most of us hit in second grade. 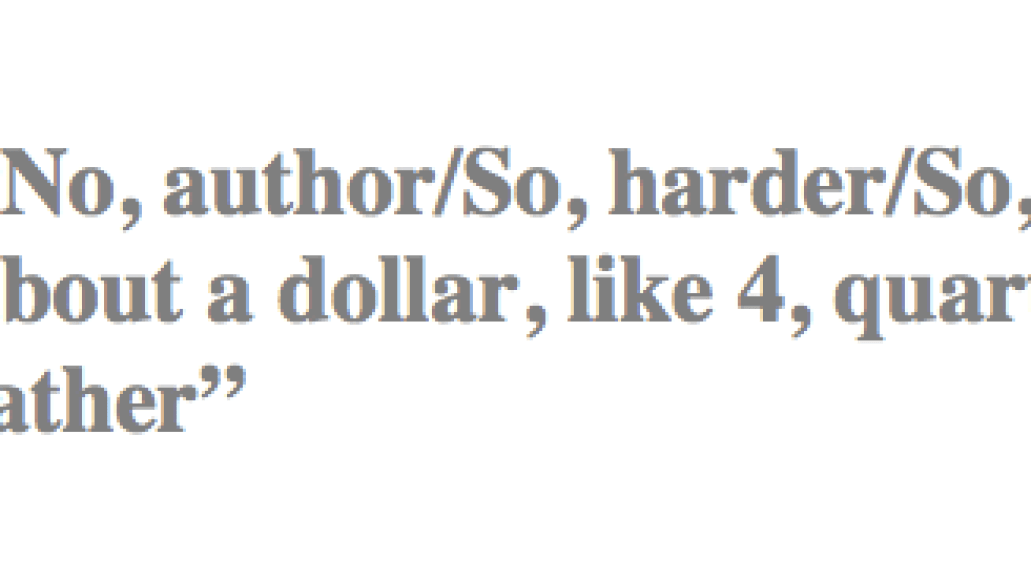 Song: “Love Me Or Hate Me”
Album: Tha Carter III
What CoS Says: Potentially the most Beckettian of hip-hop lyrics, might he also be referencing Roland Barthes with his reference to “no author”? Like Beckett, he doesn’t waste a word, leaving us off with the promise of a deep wound (“oh father”), whilst also proving he is great at mathematics. 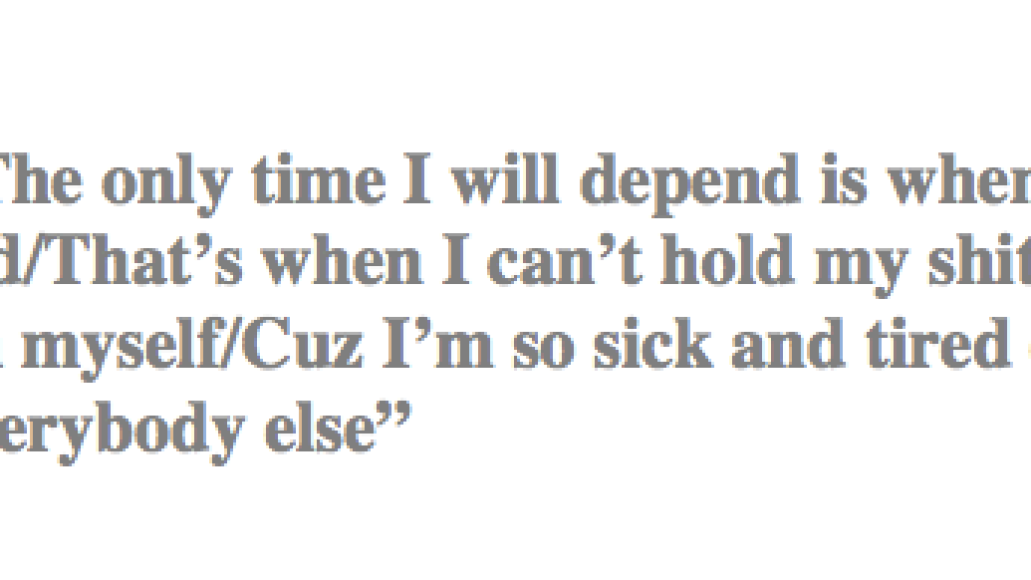 Song: “I’m Me”
Album: Tha Carter III
What CoS Says: Statistically speaking, Mr. Carter, NAFC (National Association For Incontience) states that “The elderly need for frequent toileting… causes increases in the risk of falls by as much as 26% and bone fracture by as much as 34%.” So, while “shitting on yourself” may seem like a downer, there really are some positives to be observed. 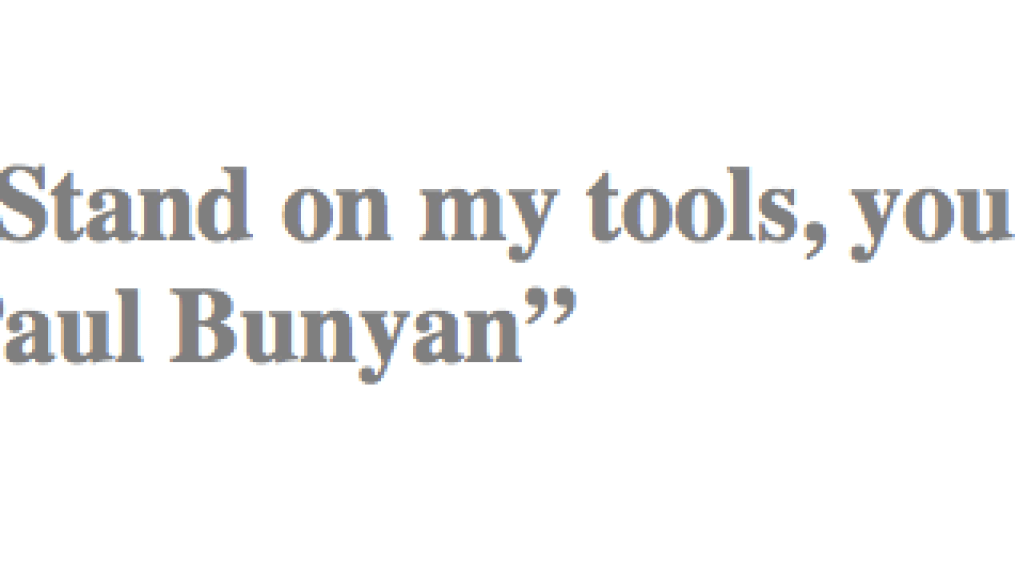 Song: “Walk It Out” (remix)
Album: Da Drought 3
What CoS Says: A straight up reference to a lumberjack, but no ordinary lumberjack…no, the mythological giant lumberjack! Weezy is “Bunyan”, his “tools” are his language; it is all very post-modern. 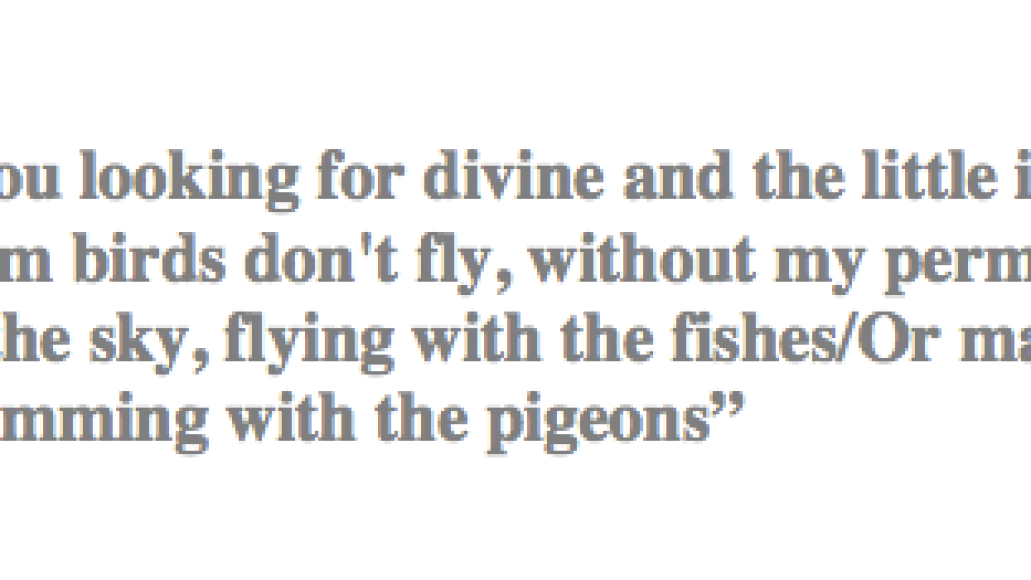 Song: “Sky’s The Limit”
Album: Da Drought 3
What CoS Says: Wayne goes back to the oldest school, where “divine intervention” or Deus ex Machina originated, or certainly, became currency through writers like Homer; here Wayne is the omniscient one, he can tell birds not to fly! But in truth there is no room for them, because he has made fish fly, and messed up evolution. And somewhere, Darwin is crying. 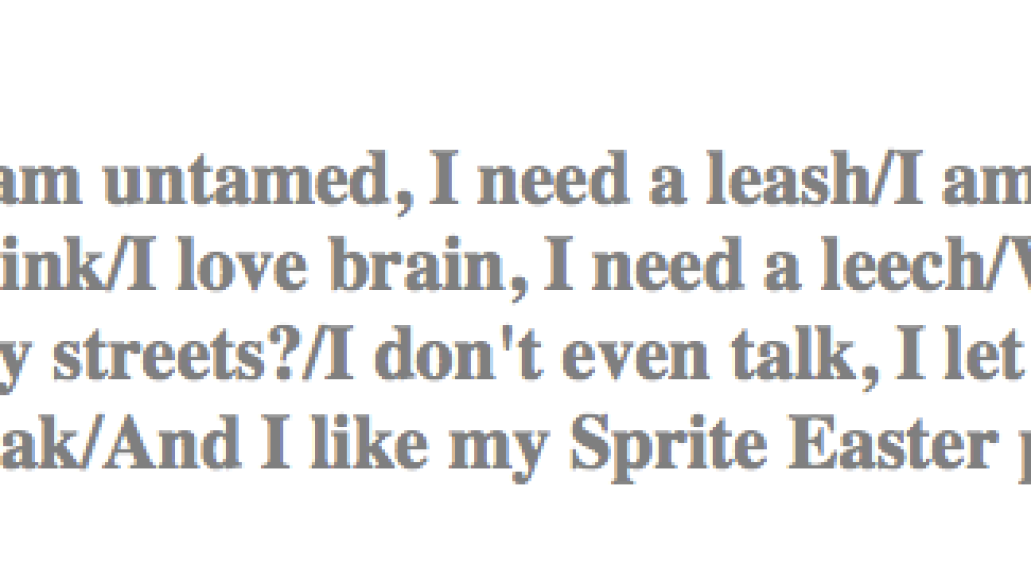 Song: “We Takin’ Over”
Album: DJ Khaled’s We the Best
What CoS Says: “I let the Visa speak” is a pretty baller line and I think I get the brain/leach figure of speech (a leech sucks and, uh, “gives brain,” amirite?) but what the fuck is Easter pink Sprite? Is that when you splash a little fruit punch in there? I don’t even… 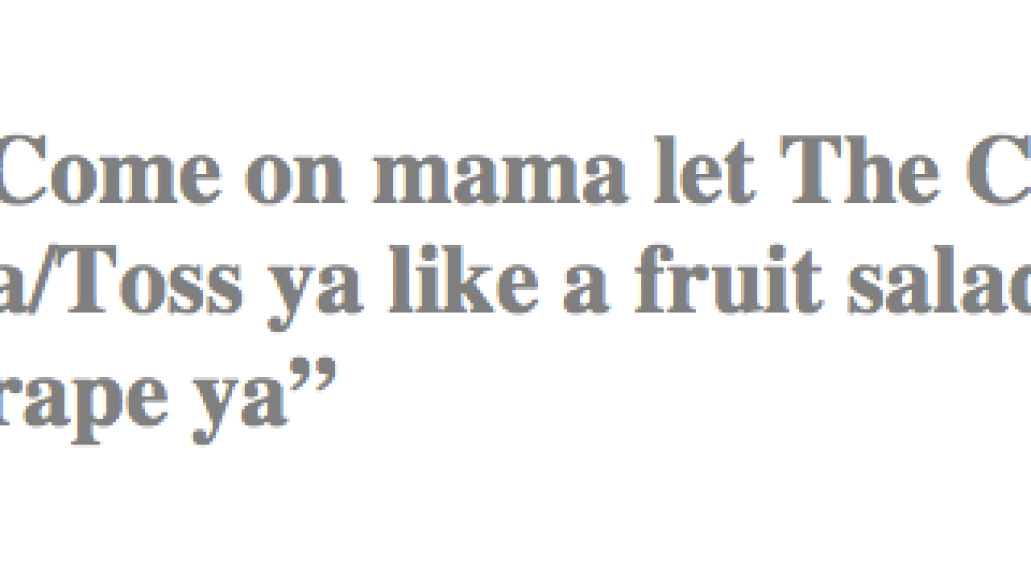 Song: “Fireman”
Album: Tha Carter II
What CoS Says: We know what tossing salad involves, but we can only hope that second bit simply involves Wayne’s favorite purple beverage. Please! 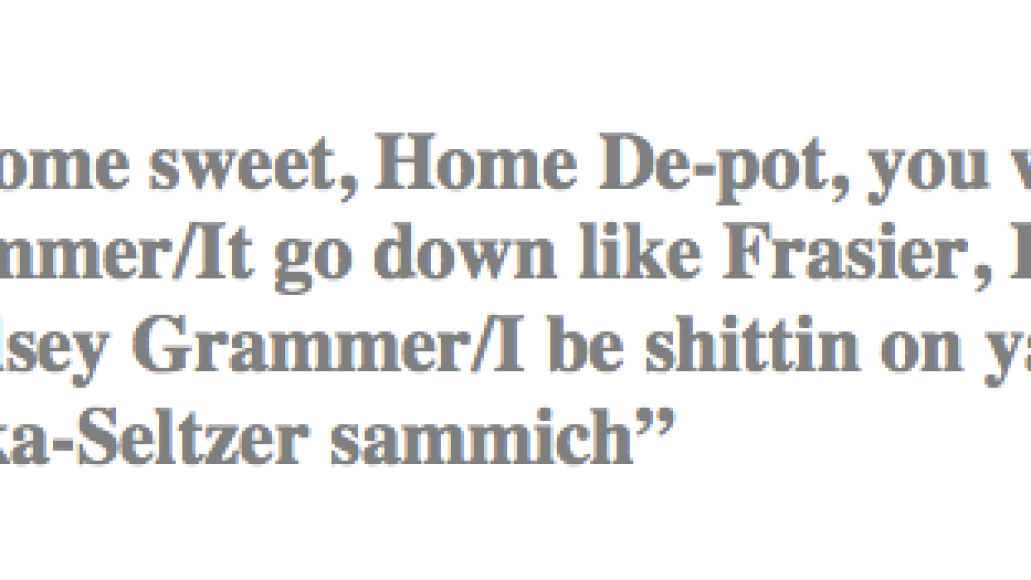 Song: “I’m So Hood (Remix)”
Album: DJ Khaled’s “I’m So Hood” single
What CoS Says: To make an obscure reference to the Frasier star, Weezy’s willing to clearly swallow anything down. Intestinal damage be damned! 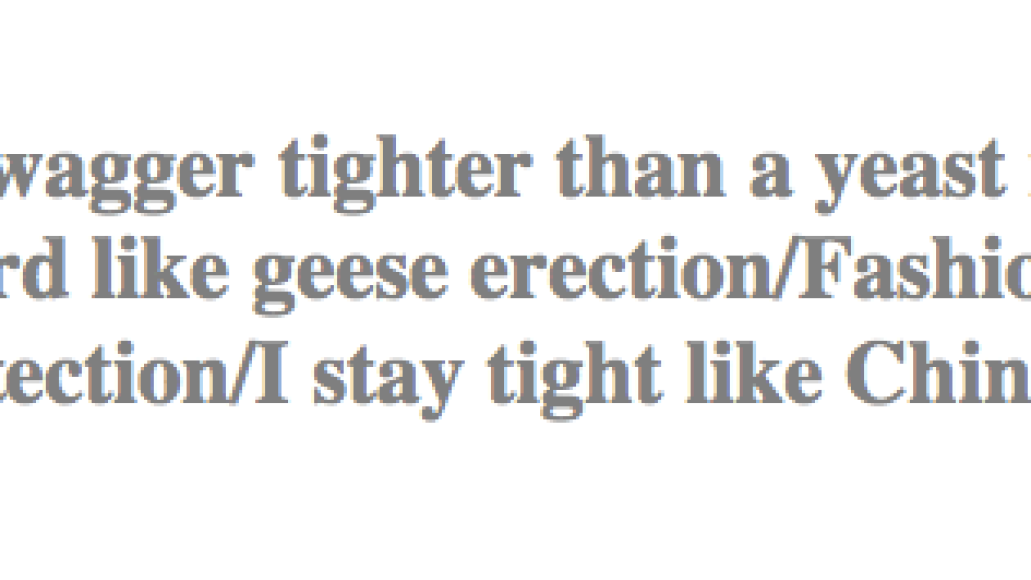 Song: “Dr. Carter”
Album: Tha Carter III
What CoS Says: Because being able to rhyme words is cool. Ya fool. 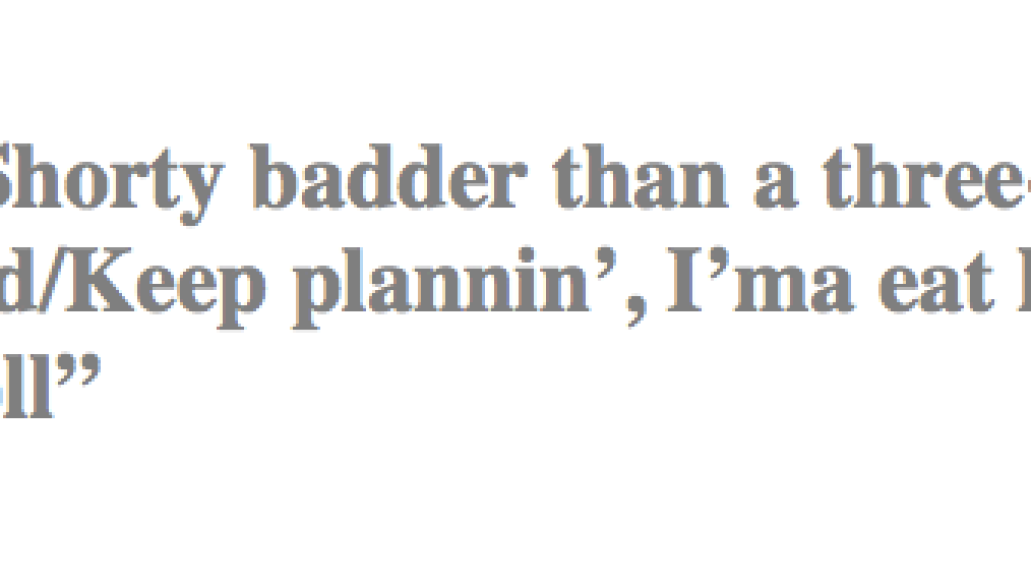 Song: “With You”
Album: I Am Not A Human Being
What CoS Says: This makes more sense when you look at a picture of a pita pocket. Google this on your own time. 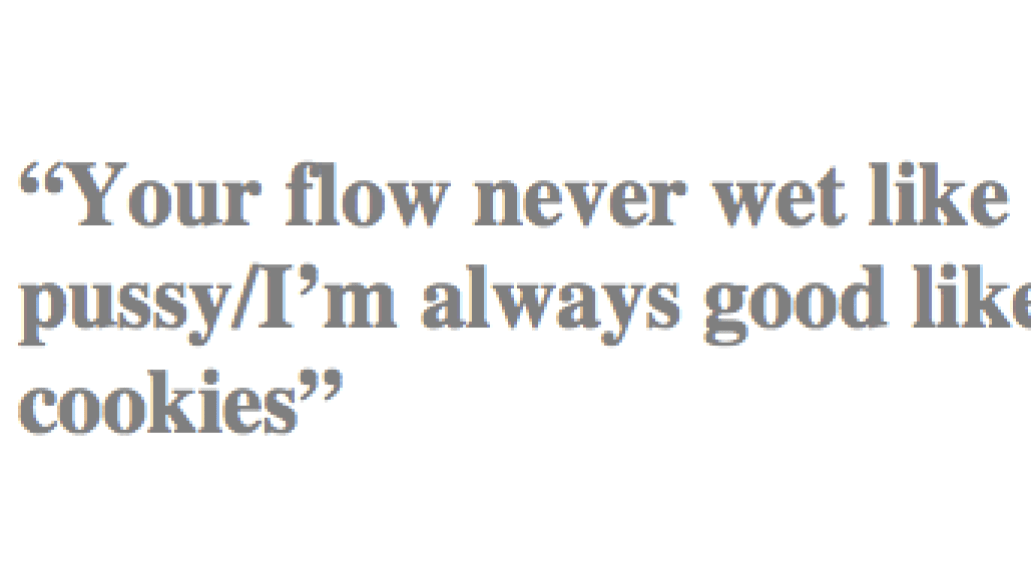 Song: “Wasted”
Album:  No Ceilings
What CoS Says: “Cognitive dissonance” is a discomfort caused by holding conflicting ideas simultaneously (via Wikipedia.com). 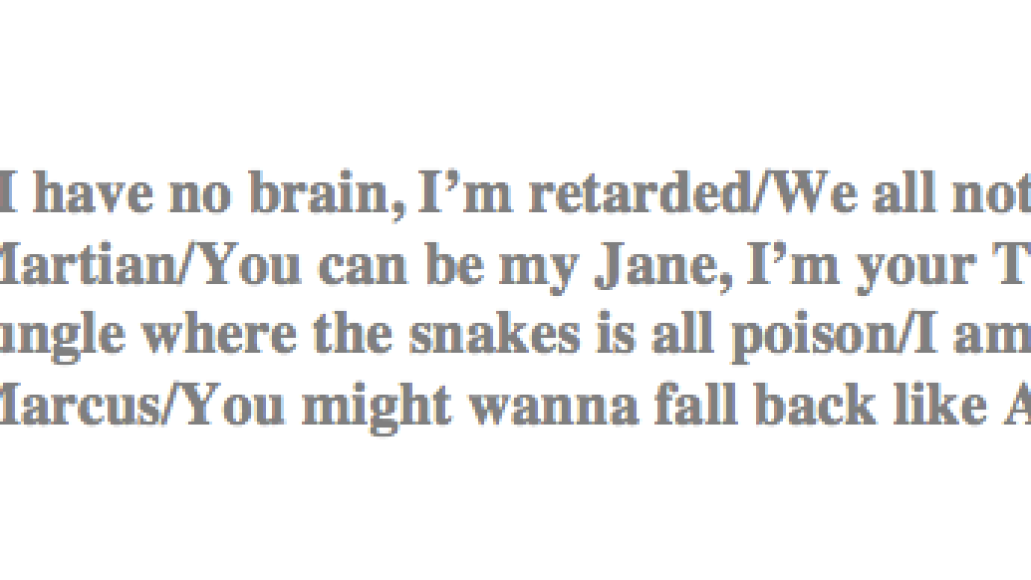 Song: “Dough Is What I Got”
Album: Da Drought 3
What CoS Says: How can a man without a brain write lyrics? How Wayne? Yet by suggesting he is a “martian”, he is putting the potential love interest “Jane” at ease, showing his sensitive, unusual side, whilst referencing the conventional masculinity of a pop culture figure like Tarzan, but then brings in snakes, and a magician, it shouldn’t work, but…. 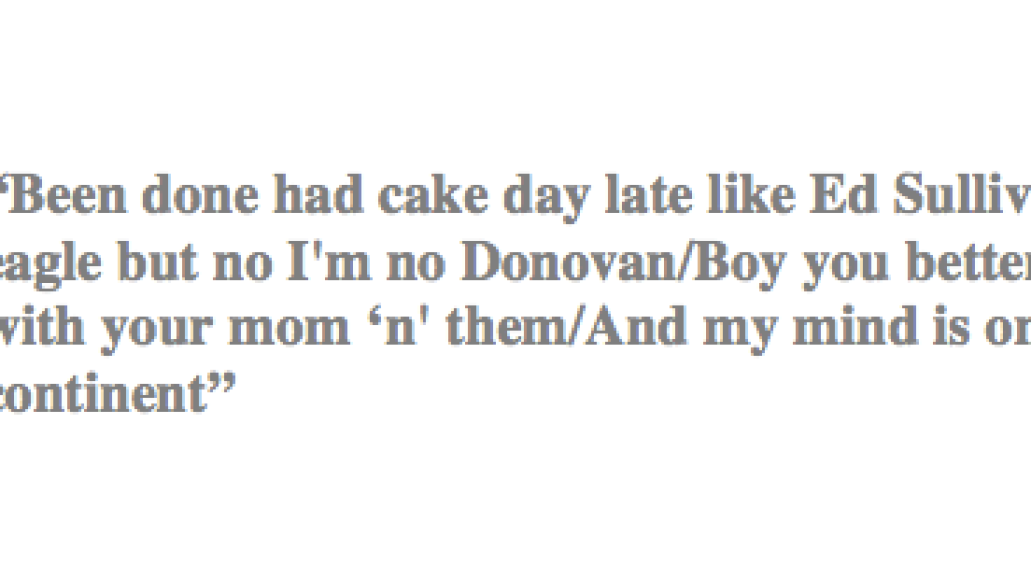 Song: “Black Republicans”
Album: Da Drought 3
What CoS Says: Wayne may say a lot of things that frighten or confuse people, but it was extra nutso to call out then-Philadelphia Eagles’ QB Donovan McNabb. Guess Weezy really is a die-hard Packers fan. 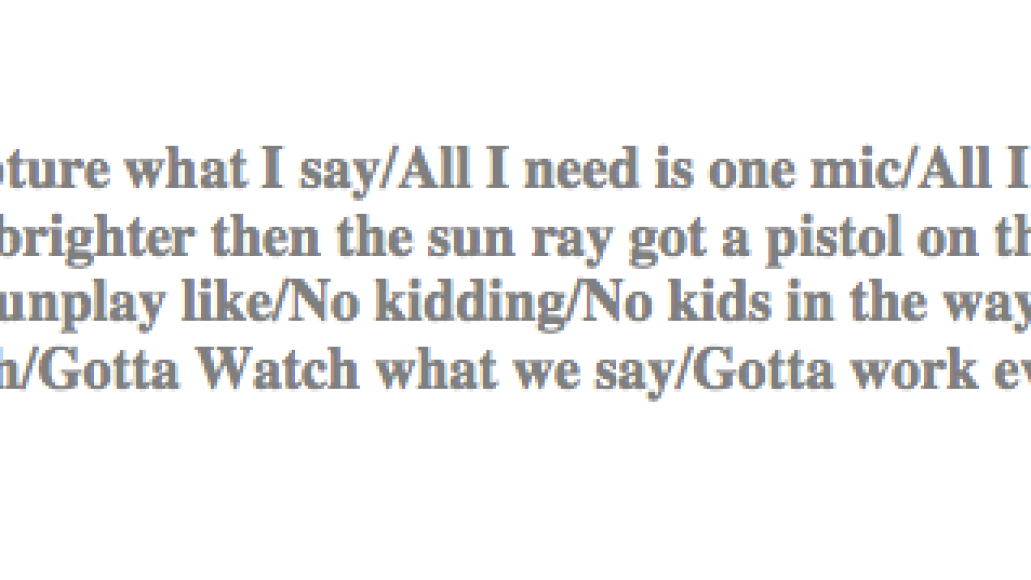 Song: “Dr. Carter”
Album: Tha Carter III
What CoS Says: Wayne’s just going completely stream-of-consciousness here, doing his typical bragging and gun play and then telling himself to be conscious that kids are around and you’ve got to be a role model. Huh? 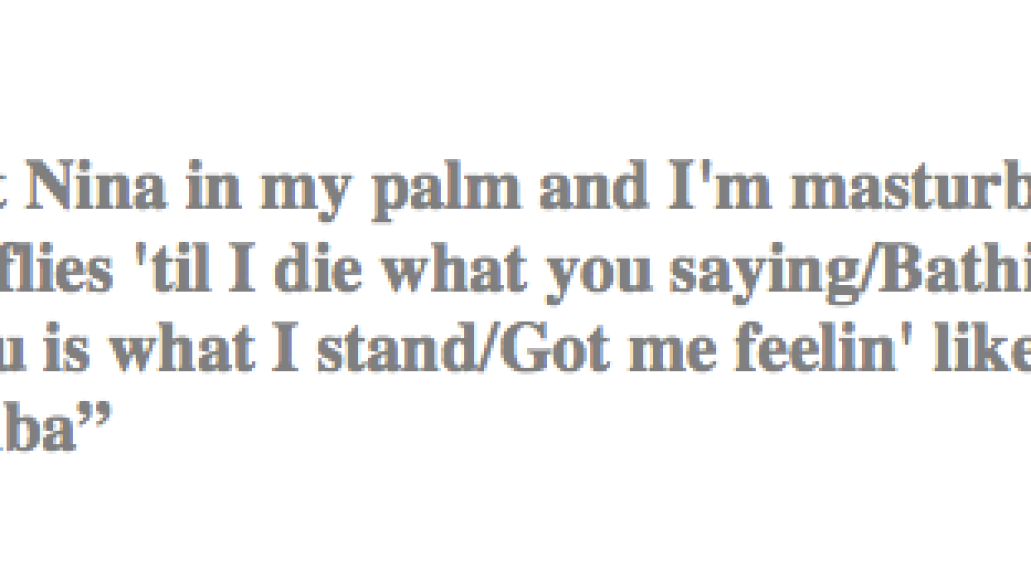 Song: “Hustler Musik”
Album:  Tha Carter II
What CoS Says: For a man known for a perpetual mumble and blasting stream of conscious-esque lines left and right, the sizzurp is at its most shiny and efficient in this TCII jam. When his stream of consciousness flows, his desire for eternal life and decadence is revealed. Wanting to be a simultaneously a black Peter Pan and Scarface is oddly touching, notwithstanding picturing Lil Wayne in green tights and darting about the sky talking to fairies.