Peter Hook & The Light visited Chicago’s Metro late Friday night, unwrapping a box of Joy Division hits, including a complete performance of Closer, the late Manchester outfit’s 1980 sophomore LP. Fans arrived in clusters, mostly donning faded shirts of yesteryear. A few even had tattoos. Yet despite the incessant fandom, there was a rather somber form of excitement amongst the crowd.

Tragedy blankets the Joy Division name – especially for Americans. Prior to frontman Ian Curtis’ suicide on May 18, 1980, the band had been slated to perform in America for the first time; as history tells it, that never happened. Of course, New Order – the rambunctious phoenix that arose from the ashes soon after – would tour the States again and again, there was never a proper tour by Joy Division. There never will be.

That could explain why so many arrived at the Metro to revel in the older sounds. They didn’t just want to be there, they wanted to hear this live. Hook & Co. understood this. Before diving head first into Closer, the band pricked the night with telling covers of “Incubation” and “Dead Souls”, the latter bringing about the best in every fan’s fists. Once drummer Paul Kehoe rolled out “Atrocity Exibition”, however, the show took on a more focused, downtrodden approach. Rather hauntingly, Hook coughed out, “This is the way, step inside…”, aptly mirroring Curtis’ vocals, only adding more grit and fury. Then again, he has plenty to be upset about these days. 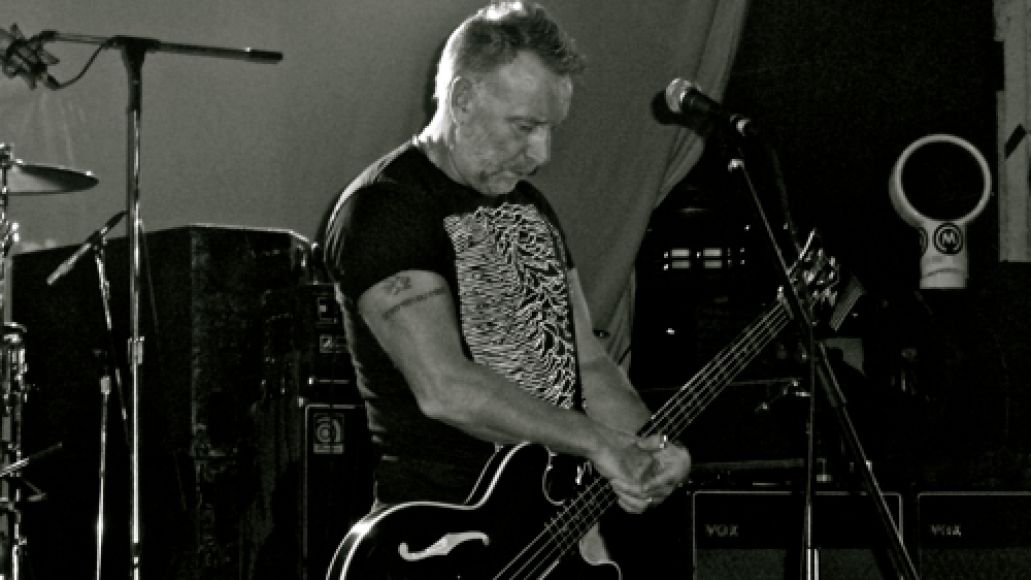 Straight from vinyl to the Metro’s celebrated stage, Closer came to life. Keyboardist Andy Poole rang all the right notes, especially on “Isolation” or show highlight “Decades”, guitarist Nat Wason channeled Bernard Sumner to a T (“Colony”, specifically), while bassist and guitarist Jack Bates helped out Hook. The real hero of the show, though, was Kehoe. So much of Closer sounds motorized, and by the third song, Kehoe was sweating buckets. Not an easy task at all – just listen to “Heart and Soul”. As for Hook, he sure didn’t keep his adoration for the music a secret. If his shirt didn’t convince you, his demeanor did. He smiled, he grooved, and he played to the fans. Some may label this entourage a cover band, and who’s to argue them, but if anything, you won’t find a better act to recreate this album. Tight, morose, and engaging – The Light delivered what every unlucky American wanted to hear: Joy Division.

Following the album’s performance – remember, it’s only 44 minutes – Hook and the team returned to dish out more dance-friendly hits, like “Digital”, “Disorder”, “She’s Lost Control”, and “Shadowplay”. Earlier in the day, the Metro’s website advertised that Billy Corgan would join the group on stage, and sure enough, the Great Pumpkin himself strolled out towards the end. Borrowing the mic, Corgan welded some of his trademark nasally vocal power to the punkish “Transmission” and the mixtape-masterpiece “Love Will Tear Us Apart”, a song that to this day pre-dates any Pumpkins track. Fitting, apropos, what-have-you, Corgan added a spark to an already fiery show. It could have closed the show, but instead, Hook returned to knock out “Atmosphere” and the group’s never-to-happen-hit “Ceremony”. Although the track was later re-recorded with New Order, it’s always been considered Joy Division’s, and last night, Hook made that pretty clear. By night’s end, one wondered, Who needed this more: the fans or Hook? Some might argue both.