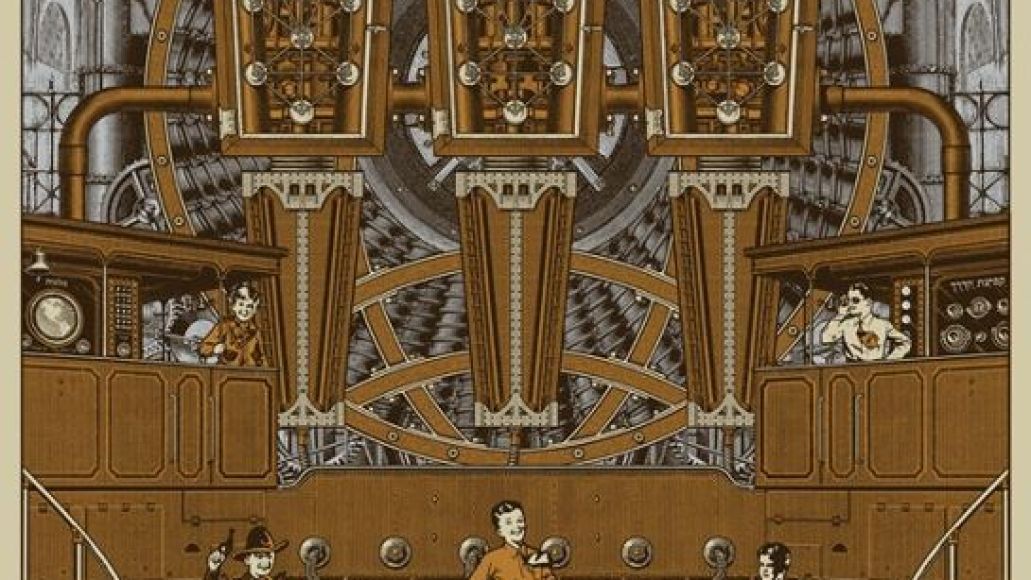 Jack White always takes care of his (new) hometown. Ever since moving to Nashville a few years ago, he’s begun tours with small private or last-minute local shows. In 2007, the White Stripes kicked off their Icky Thump tour at Nashville’s Cannery Ballroom – while the Raconteurs’ subsequent tour in 2008 started just upstairs from that room in the Mercy Lounge. The Dead Weather made their debut at the grand opening of White’s Third Man Records building in 2009, albeit with a private show for friends and family. This trend continued on Wednesday night as The Raconteurs took the stage for their first performance since 2008 at White’s home turf of Third Man Records, a night before their previously announced date at the Ryman.

This time around, it all started with a single tweet. On August 26th, Third Man’s official twitter feed posted “The Raconteurs live at Third Man Sept. 14th!!!” with a link to buy tickets – which went on sale immediately. Only 150 tickets were released to the public, and only half of those were available online that day. The rest were sold at the store the following Tuesday. Needless to say, this became one of the hottest tickets in Nashville extremely quick. Tickets were going for hundreds of dollars on StubHub and Craigslist as soon as people had bought them. All of this only added to the already momentous amount of hype for the return of The Raconteurs. On Wednesday, they finally arrived.

Fans started lining up before noon for the 7 p.m. show – not out of the ordinary for something relating to Jack White. The Third Man store opened up at 5 p.m. to sell the badass limited edition poster (see above) designed by Rob Jones, along with various other Raconteurs merchandise. By 6pm, the line was about as long as it was gonna get, then came the waiting game. The 7pm start time came and went (which is to be expected at Third Man – not that anyone’s blaming them) and all the fans were still waiting in the alley beside the building. After a short delay, we were eventually led into the blue room in the back of Third Man – which, if you’ve never been, is a thing of beauty – and the show started at 8:15 p.m.. Opening the show was St. Louis’ Pokey LaFarge & The South City Three, who were quite a revelation. Pokey and his band were of another time – a time when an upright bass was standard, there was no such thing as electric guitar, and harmonica was the thing. If they stepped into a time machine bound for the 1920s, no one would bat an eye when they stepped out. Their infectious old-tyme American music worked because there wasn’t a trace of irony, yet they had a good sense of humor about them. If you have the chance to see these guys, I strongly reccommend you do so. 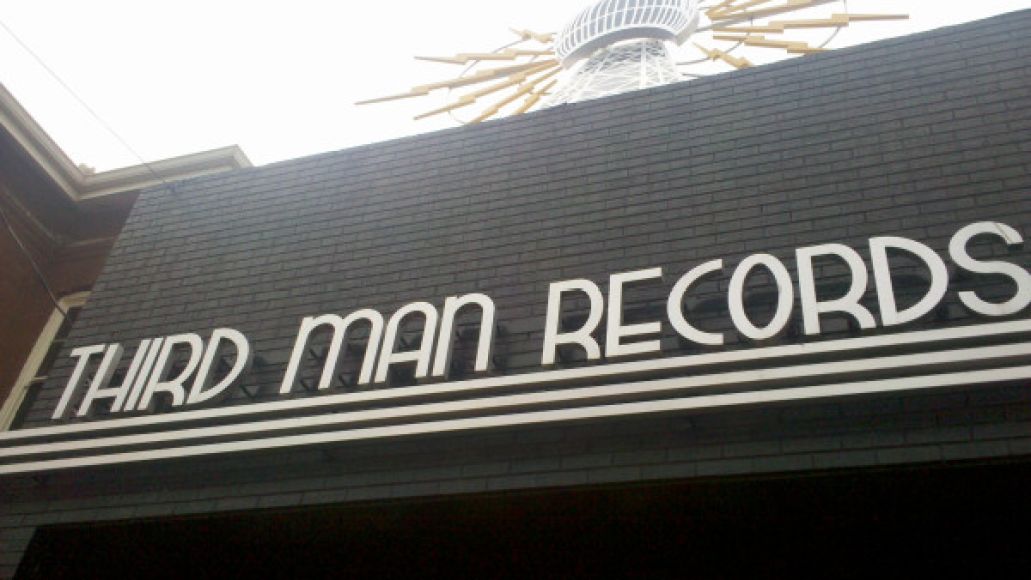 The crowd was genuinely appreciative of Pokey LaFarge, but we all knew what we were there for. After a half an hour setup, a Third Man employee stepped up to thank the crowd for being there before cutting to the chase with “Ladies and gentlemen… the Raconteurs!” The acclaimed group then walked on the tiny stage to rapturous applause before ripping straight into “Consoler of the Lonely”. White – the obvious star of the show – kept his back turned until it was his turn on the mic, which just made the crowd go even more wild when they finally did get a glimpse of the recently appointed “Nashville Music City Ambassador“. Right off the bat there was no rust, no dust . Three years later, they still don’t skip a beat – at least on their own terms.

From the opener they tore through “Salute Your Solution”, “Hands”, and “Old Enough” before having to take a short break while they switched the reels in the control booth (every show at Third Man is recorded straight to vinyl). While they waited, White told the story of how he met Brendan Benson (“Which one is Brendan again? The blonde one?”) back in the day in Detroit – the first of a few amusing anecdotes. Everyone was in good spirits, even White, which was comforting considering he usually looks a tad too serious. Throughout the evening, his emotions ran wild. He flashed a few grins, cracked a couple of jokes, and even appeared to shed a tear on “Blue Veins”. Maybe it was just sweat, though. 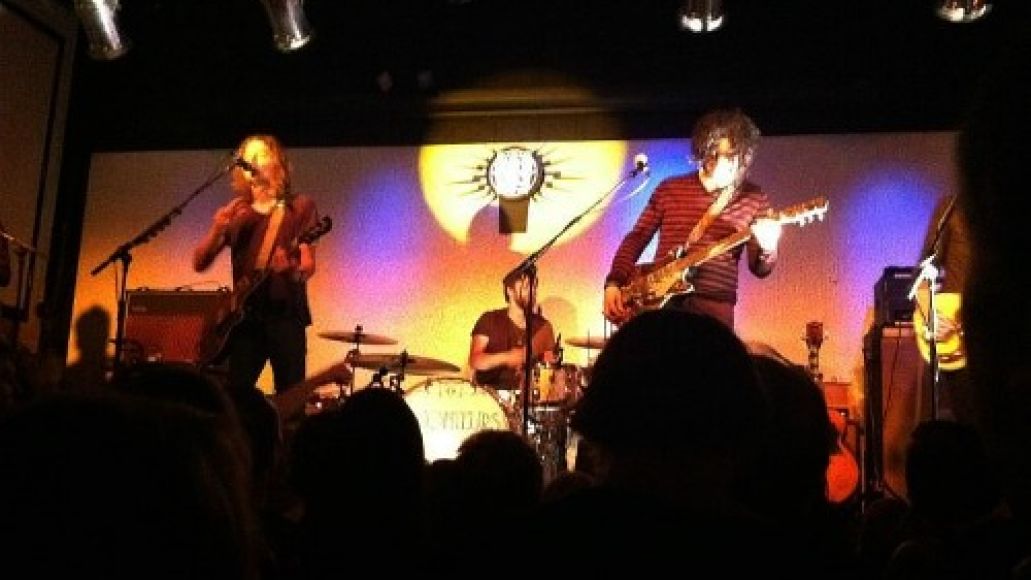 The material sounded just as fresh, too. New arrangements for “Consoler of the Lonely” and “Broken Boy Soldier” surprised many attendees – the latter now stretched from its original three-minute album counterpart. Although nothing new for The Raconteurs, a horn section tagged along, which was oddly entertaining, given the size of the stage. The section had to set up shop along the side-stage stairs because it was literally the only place they could have gone. Nevertheless, they played strong (and loud) through solid cuts of “Many Shades of Black” and “Switch and the Spur”, the latter of which led to the brilliant rendition of set closer “Broken Boy Soldier”. After a short absence, White & Co. returned to the stage – again to deafening applause – and broke into their “hit”, “Steady as She Goes”. 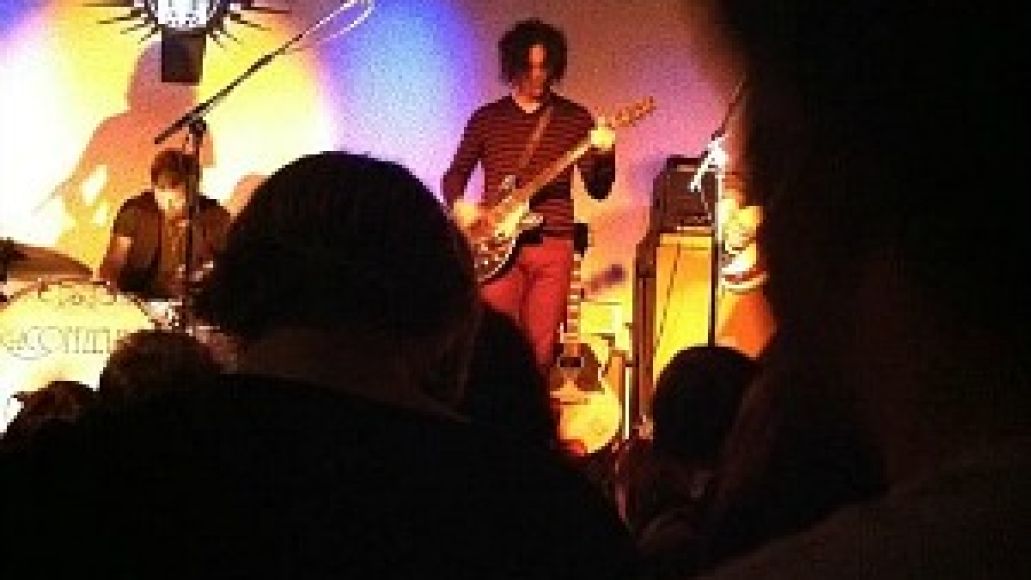 Let me take a moment here to pay tribute to the temple of music Jack White and crew have built here in my hometown of Nashville. This was my fourth or fifth time being in the back “blue room” of his Third Man building, but every time I walk in I’m wowed. The room has prestine acoustics – it has to, since it’s where Third Man does a good bit of their recording. The stage is elevated far above the rest of the room, giving the Raconteurs (or whoever else is playing) a larger-than-life feeling – a fact that Jack took full advantage of on Wednesday. Half of the room is blue wall curving into a blue floor – the very spot where the label shoots the covers for their “Blue Label Series” 7-inch records. Top it off with a full bar and a photobooth, along with great lighting on the stage and off, and you’ve got yourself a hell of a room – I’m sure Jack White wouldn’t have his in-house venue any other way.

The final song of the encore was no surprise – “Blue Veins” has been a staple to close Raconteurs shows in years past. It works so perfectly because it provides a perfect outlet for White to wail on his guitar like everyone wants to see him do. This night was no exception. The crowd just stood in awe as the former White Stripes frontman churned in emotional solos through most of the 10-minute-long jam. By the time they walked off for good, they had only been playing for an hour. Naturally, I can see how some people could be disappointed in this, but as I mentioned earlier, every Third Man show is recorded to vinyl so they don’t have much flexibility time-wise. Oddly enough, there were no new songs and no surprises. However, over one 10-song set, the band confirmed one thing: The Raconteurs are back, and they’re better than ever.

Setlist:
Consoler of the Lonely
Salute Your Solution
Hands
Old Enough
Top Yourself
Many Shades of Black
Switch and the Spur
Broken Boy Soldier
Encore:
Steady as She Goes
Blue Veins