In the 1997 indie hit Chasing Amy, Ben Affleck’s Holden McNeil pens a comic book titled Bluntman and Chronic, which is essentially a slacker/stoner-fied version of Batman and Robin. Years later, in 2001, Affleck’s character returned in Jay and Silent Bob Strike Back and railed against his roots, stating, “Why in god’s name would I wanna keep writing about characters whose central preoccupation are weed and dick and fart jokes?” He adds, “I mean, ya gotta grow, man.” And no group of people could possibly understand this mentality more than the three members of Poway, California’s Blink-182.

When they were a pop machine that took the world by storm, Blink often wrote about the following subjects: strange sex, strange sex with animals, personal anecdotes about each other’s genitalia, chugging beer, and pissing your girlfriend off in the process. As a result, their lyrics have always been on the brink of absurd, if not downright hilarious. Throughout their last two albums–2003’s self-titled effort and their latest LP, Neighborhoods–the trio have leaned toward the more serious side of life and, as a result, have tackled subjects beyond “fucking and sucking” their own kin.

Regardless, it’s hard to forget the Blink-182 that used to sing about running around naked, obsessing over Princess Leia, and facing the harsh complexities that surround any struggling teenager’s attempts to get laid. So, we put together 16 of the most asinine lyrics the band has written. And let’s just say, they’re not quite grown-ups yet–at least lyrically, speaking. 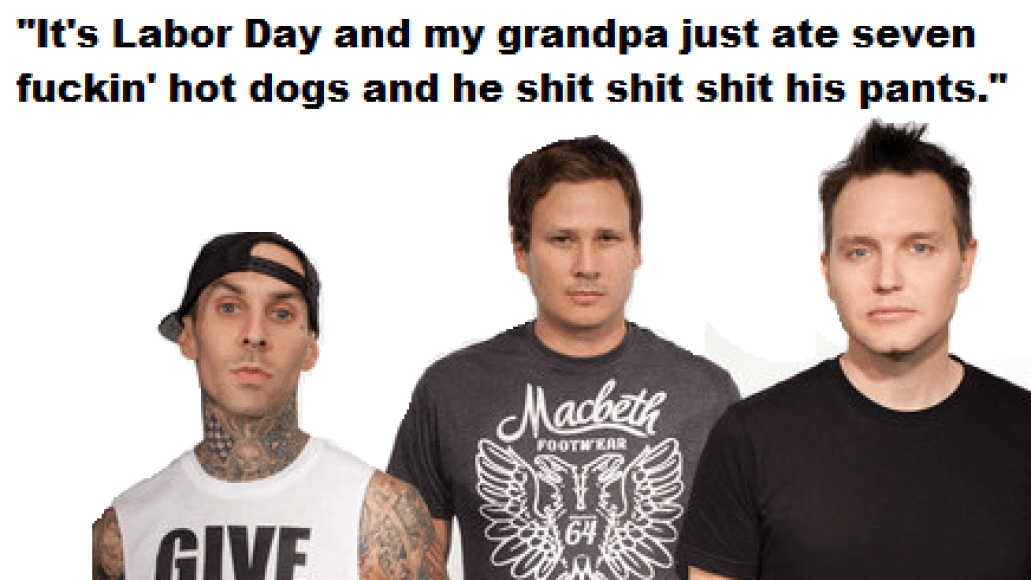 Song: “Happy Holidays, You Bastard”
Album: Take Off Your Pants and Jacket
What CoS Says: “Geriatric incontinence fueled by animal byproducts on a federal holiday may seem like the most ridiculous part here, but in reality it’s the idea that any man, old or young, would eat seven hot dogs outside of a bet. Did Hoppus torture his own grandfather to produce a funny lyric? We can only assume he did.” 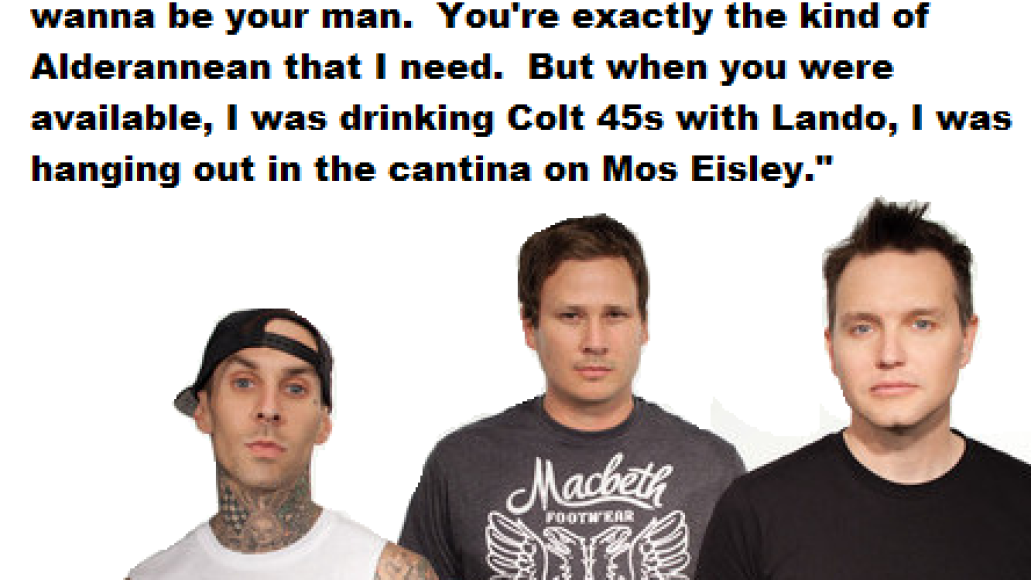 Song: “A New Hope”
Album: Dude Ranch
What CoS Says: “Blink-182 acolytes will take bullets for the following things: 1) the girl of their dreams and 2) George Lucas. Hoppus and DeLonge worked their love of the holy trilogy (or perhaps just Princess Leia or maybe just Carrie Fischer or most likely Carrie Fischer pre-Drop Dead Fred) into a song, and it doesn’t get more nerdy than that.” 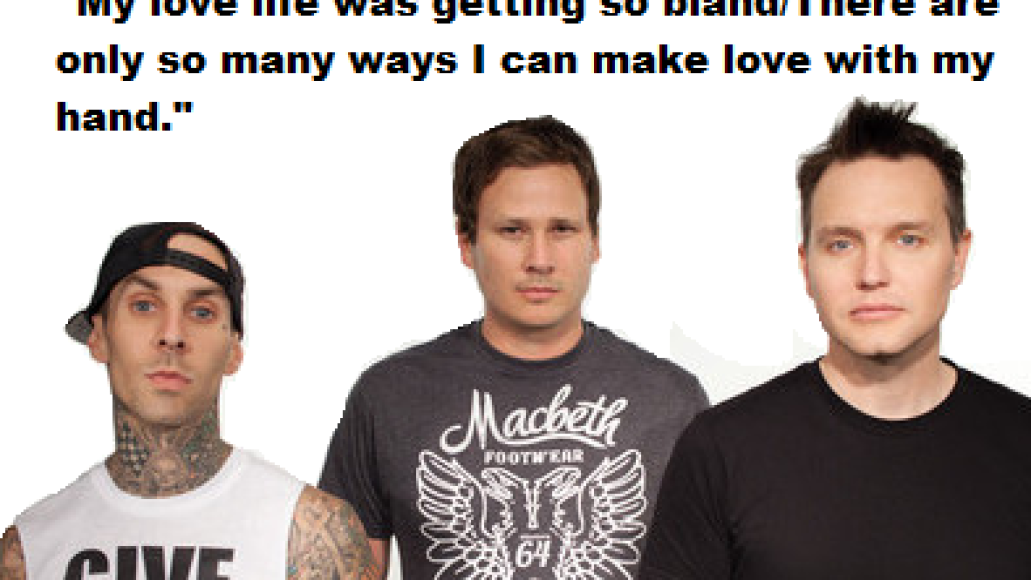 Song: “M+M’s”
Album: Cheshire Cat
What CoS Says: “Generally speaking, there’s only one way you can make love with your hand, but please, indulge us regarding the exact moment in your life where you exhausted all avenues of self-pleasure with your hand. Be warned: You should have a spotter if you’re adding asphyxiation to the, shall we say, playing field. Or, just go and attempt to find some human contact. For more help with that, listen to Prince and Barry White. Now.” 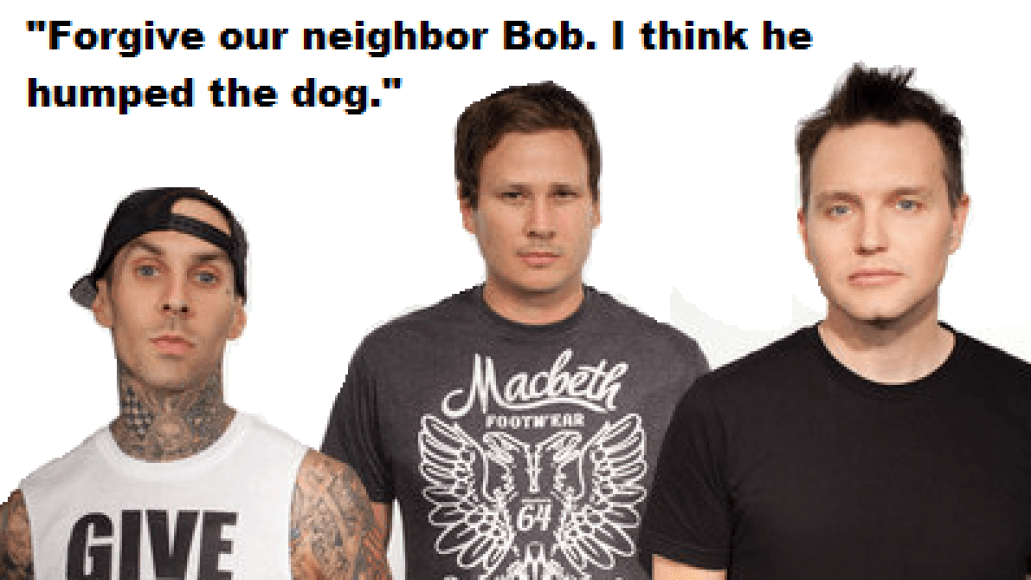 Song: “Anthem”
Album: Enema of the State
What CoS Says: “Nothing like a simple rhyme scheme and sexual reference to try and lighten the tension of having your house party busted. Also, that kind of accusation–especially directed toward one’s neighbor–shouldn’t be hung on a hunch. Pics or it didn’t happen, Hoppus.” 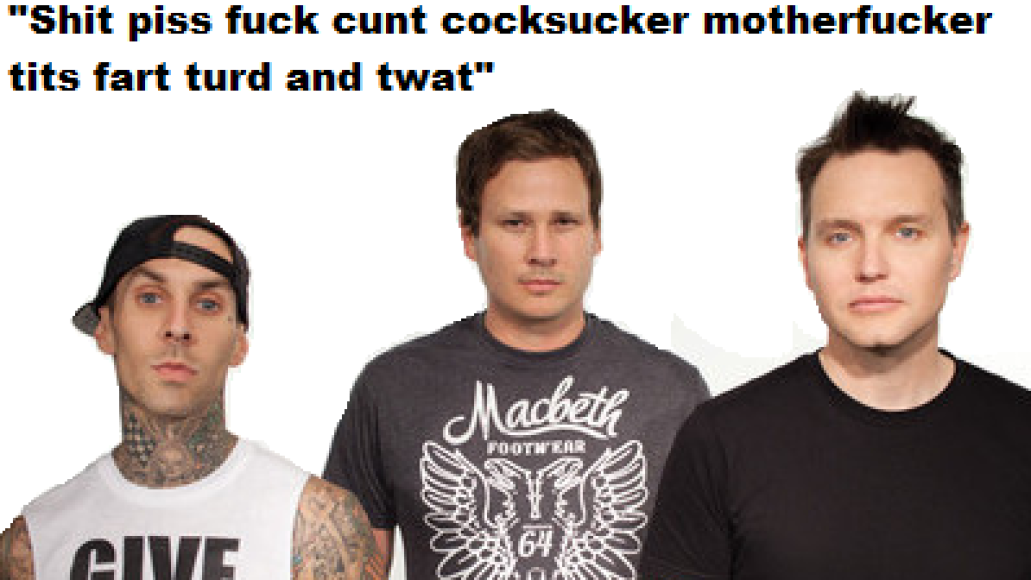 Song: “Family Reunion”
Album: The Mark, Tom, and Travis Show
What CoS Says: “An analysis of the text reveals the sporadic structure of this line, which can offer insight into the author’s intentions. The stressed syllables clearly imply immense weight on each word and a repeated emphasis without pause. Hoppus’s delivery of this line then matches its meter, for this repeated strain is delivered with heretofore unparalleled courage and power, supported by emotions plumbed and solicited from only the purest and most veracious chambers of the human heart. Also, fart.” 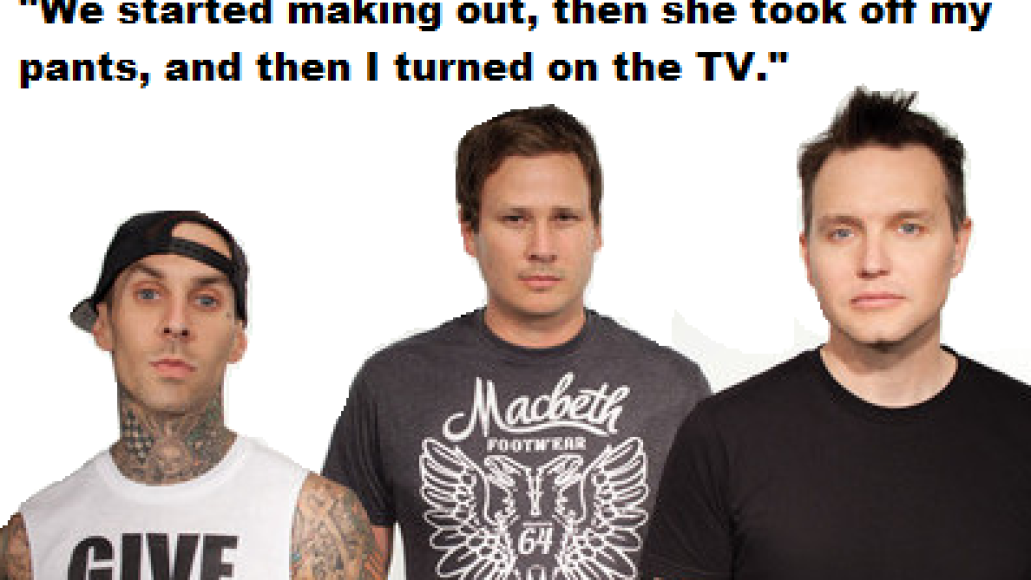 Song: “What’s My Age Again?”
Album: Enema of the State
What CoS Says: “Mark Hoppus is about to get lucky, so what is on television that could possibly be better than what’s happening to him at that moment? Probably nothing, unless it was Who Wants to Be a Millionaire?, ’cause I think everybody watched that in ’99. Just remember, Mr. Hoppus: There’s always a time and a place for Regis. On the bed, with your pants down, is not one of those times.” 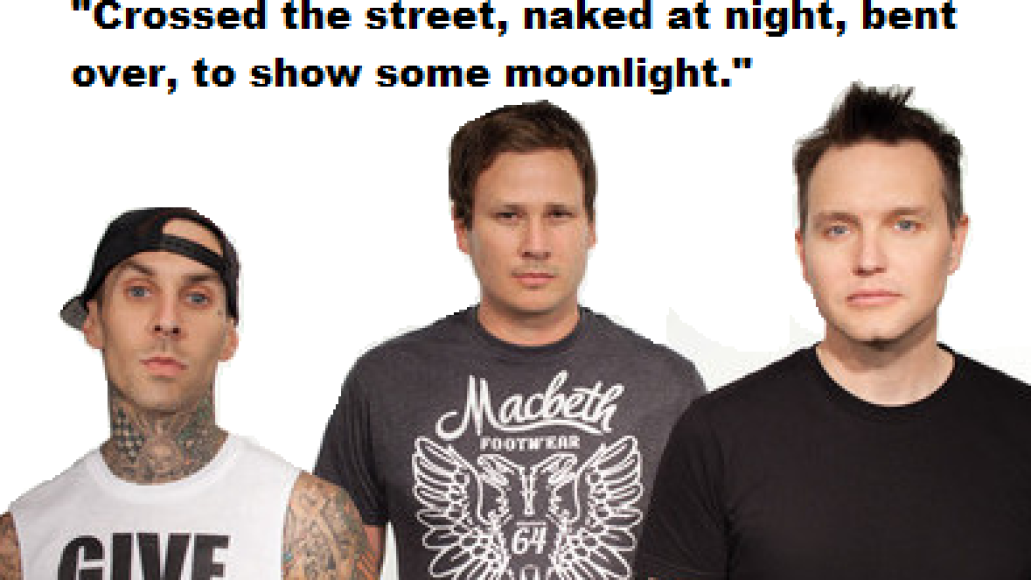 Song: “Degenerate”
Album: Dude Ranch
What CoS Says: “Technically, I don’t think it’s ‘mooning’ if you have no clothes on. You’re just a naked dude bending over.” 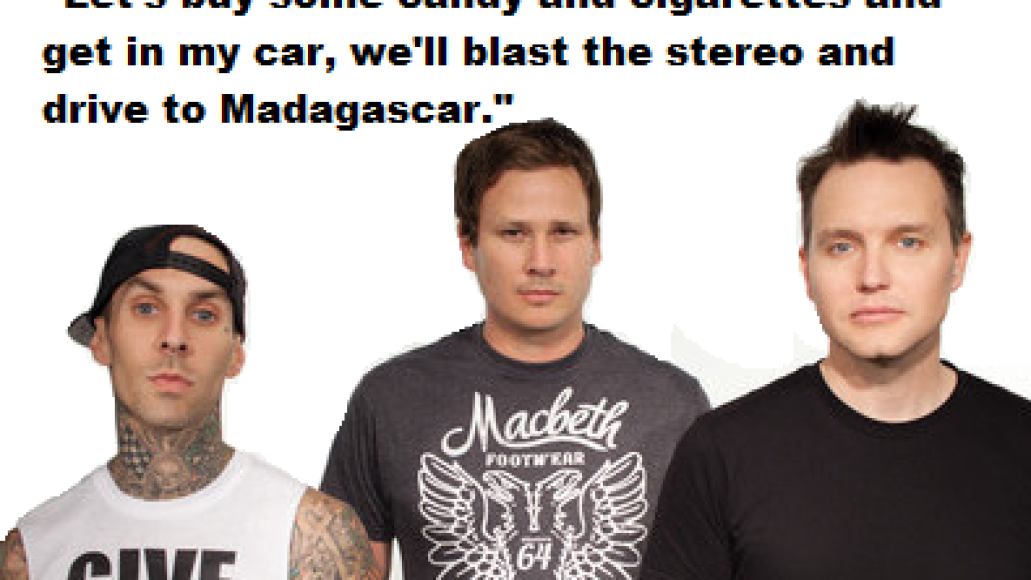 Song: “M+M’s”
Album: Cheshire Cat
What CoS Says: “Hoppus rhymes “car” with “car” here, which some may think is a boner move, but we think it takes guts. Plus, it’s probably not very easy to drive to Madagascar from San Diego. I think there’s an ocean in there somewhere…” Song: “Shut Up”
Album: Take Off Your Pants and Jacket
What CoS Says: “In the words of Stephanie Judith Tanner, now a meth addict and desperate shadow of her former self, ‘How rude.'” 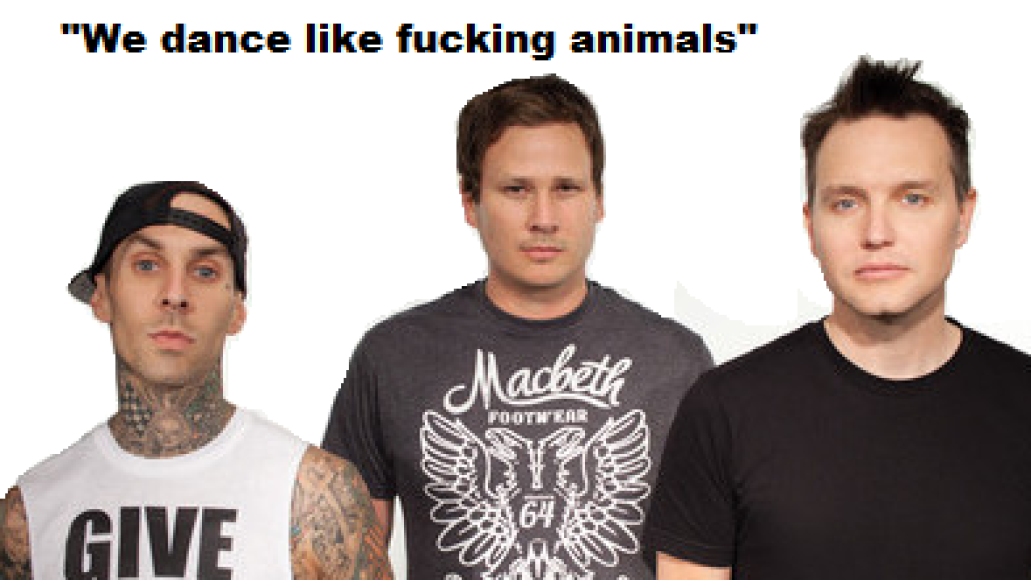 Song: “This Is Home”
Album: Neighborhoods
What CoS Says: “Do they mean the physical act of fucking animals? Or is ‘fucking’ simply used as a modifier? A mystery. Sort of like when someone claims ‘funk rock’ as their favorite genre. You never know if they prefer more rock or just straight-up funk. Or, maybe we’re just thinking too hard on this. Here’s an idea: Has anyone seen someone fuck an animal? Were they dancing? Is anyone even listening to me?” 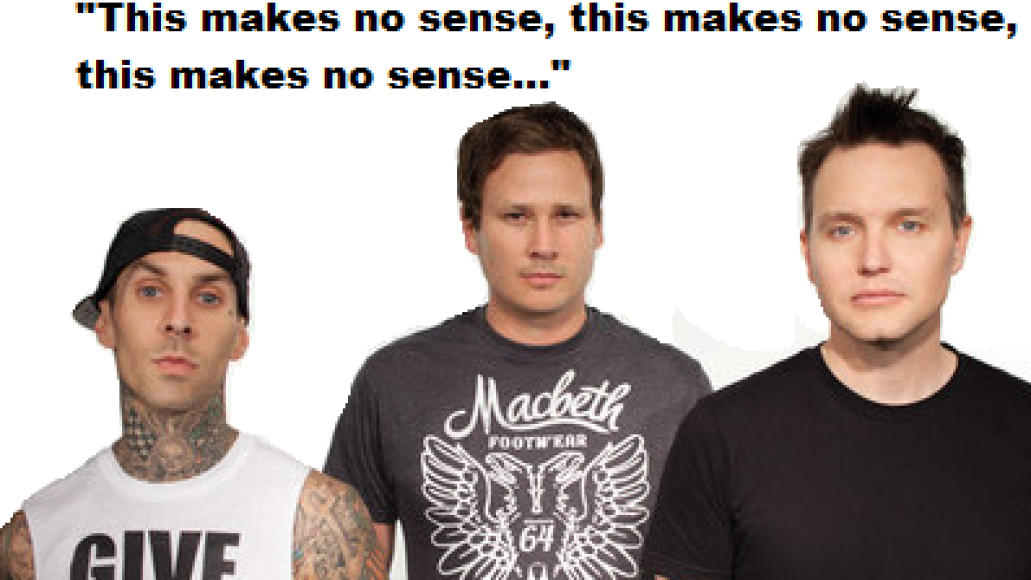 Song: “Fighting the Gravity”
Album: Neighborhoods
What CoS Says: “Could you imagine if more artists provided disclosures like this before their songs? Like, if Tom Waits basically admitted, ‘Before we start this song, I want you to know I’m going to talk about killing someone. And it’ll creep you out. You’ll also think I’m cooler for it.’ Respect.” Song: “Give Me One Good Reason”
Album: Take Off Your Pants and Jacket
What CoS Says: “Do all the girls really want to do this? Why are torn pantyhose more rebellious than normal ones? Ripped jeans are one thing, but torn pantyhose? What happens when they’re washed? Disintegrated. That’s just wasteful.” 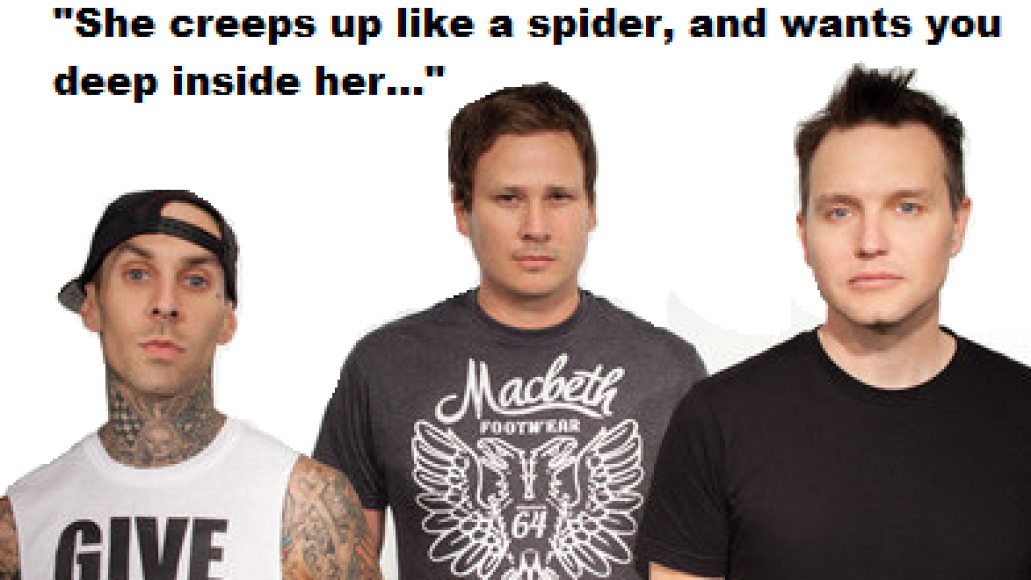 Song: “Snake Charmer”
Album: Neighborhoods
What CoS Says: “Have you ever read Dante’s Inferno? Sort of creepy. For anyone who doesn’t believe in god, it might be seen as some scary comic book. One scene that sticks out to this day are the two cantos revolving around two thieves and some mutating snakes. Sort of like that ‘found footage’ onboard the Event Horizon. (Sam Neil, anyone?) Gives me the heebie jeebies. Thanks for the flashback, Blink-182.” 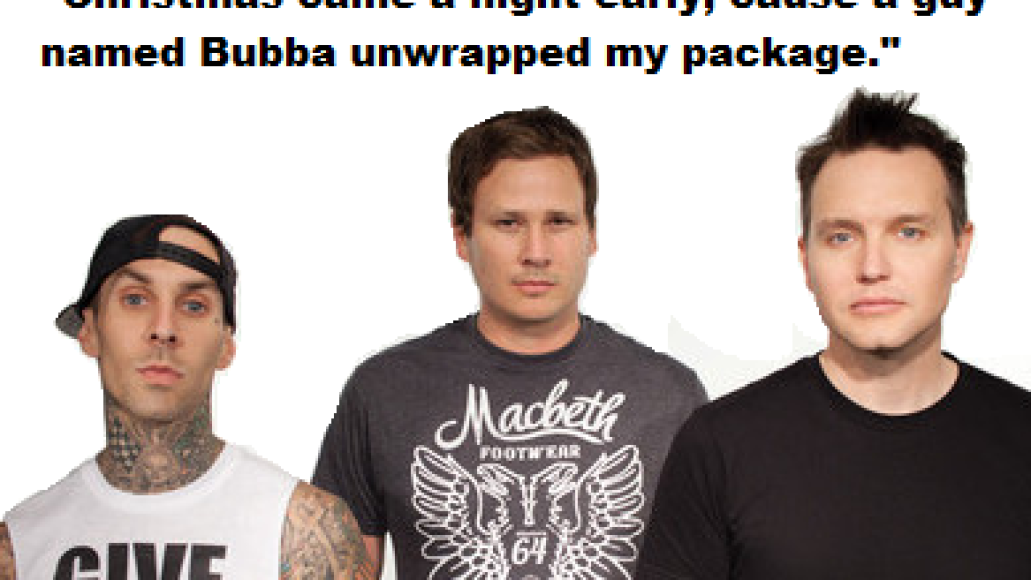 Song: “I Won’t Be Home For Christmas”
Album: B-Side
What CoS Says: “It must suck being nicknamed Bubba these days. You’re either a reminder of a gaudy restaurant across America (taken from an equally gaudy movie) or some nefarious fellow from prison. Our hearts go out to you.” Song: “Josie”
Album: Dude Ranch
What CoS Says: “But why? You must either be hungry or deserve it. She’s not just going to get you tacos for the hell of it. If that’s the case, one should be grateful, especially since we’re assuming this is California Mexican food? Yeah, this Josie is someone even your angry, spiteful father could get behind. Not literally, of course. Yes, we just went there.”