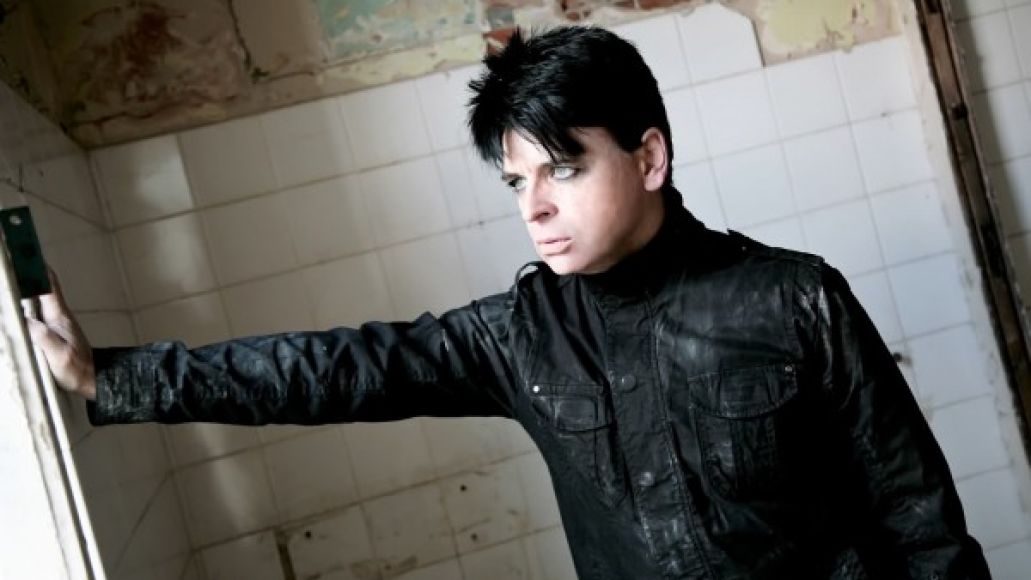 The music video for his Battles collaboration “My Machines” was kick ass and all, but what we really want to know is what Gary Numan has done with his own machines for his first release in five years, Dead Son Rising. With the CoS premiere of album track “Big Noise Transmission”, it’s clear the electro-pop and new-wave pioneer remains innovative even after 30+ years on the scene.

In keeping with the industrial leanings of his recent works, “Big Noise Transmission” is a hammerhead of pounding beats and scuzzy guitar licks. Crunchy and zapping electronics whiz throughout, a conglomeration of electro-rock befitting the track’s title. Numan’s unmistakable vocals take a creep-you-the-hell-out rasp for the refrain of “come on littler fucker, you can let me out,” rounding out a dark and sinister sci-fi rocker.

You can hear an exclusive stream of the cut below, in addition to the previously released “The Fall” and nigh-title-track “Dead Sun Rising”. The album, Dead Son Rising (note the difference there), is out now in the UK and available digitally in the U.S. The album’s U.S. physical release is scheduled for December 6th via Red Eye and pre-orders are now ongoing.

We also had a chance to briefly chat with Numan about the new album and his other upcoming endeavors. Check out his answers further down the page.

Dead Son Rising is essentially the phoenix that rose out of the ashes of demos. Could you digress a bit on the process that went into searching through your old work?

Dead Son Rising was originally intended to be a ‘filler’ album. Something that we thought would be reasonably quick to make and would fill in the gap between the previous studio album Jagged and the intended follow up to that, an album called Splinter. I expected Splinter to take about two to three years to make and so putting something out during that gap would help to keep fans interested. This plan did not work out at all.

Originally DSR was going to be made up of unused songs that had been written for the previous three albums, Exile, Pure and Jagged. I had about 14 tracks that we felt we could finish off fairly easily and which would make a very good album. These tracks were very easy to find as prior to Exile I kept nothing so I only had a small number of unused songs laying around. For the first 20 years or so of my career, if a song wasn’t working for any reason I would erase it. Eventually even I realized that was a pretty stupid and wasteful thing to do and so I started to keep those tracks that didn’t make it onto albums.

Having chosen the songs we wanted from the unused few, Ade [Fenton] went to work and quickly came back with a number of tracks that sounded strong and near to completion. I did various bits on some of these, vocals and lyrics for The Fall for example and progress was made but, I have to admit, almost from the beginning it didn’t come together the way I’d hoped. I began to dislike most of the chord structures and melodies that I had written for those songs and the more Ade did, the more I felt that my part of the process was letting the project down. In 2009, I had to admit that I really didn’t like any of it and turned my back on the project entirely.

Then, after about 18 months of ignoring it, I found myself on holiday in America and I heard my wife Gemma playing some fantastic music from another room. I rushed in to find out what it was only for her to tell me it was the Dead Son Rising tracks that I’d said I hated 18 months earlier. I called Ade and said that I’d changed my mind yet again and committed to finish the album as soon as I got home. Luckily, Ade had continued to work on the album during my absence and had improved many of the songs and so, when I did start to contribute again, it was quite different to the earlier version, and much better. I then became obsessed by it and worked flat out for a while, adding far more lyrics and vocals than we had originally planned. The end result is an album that has almost nothing of those early demo versions that we started with. It’s about 95% brand new material, not a ‘filler’ album at all, and so I’m very proud of it. And very grateful to Ade for sticking with it and for bringing me back in.

“We Are the Lost” and “Dead Sun Rising” are part of a sci-fi story you’ve been working on. Is sci-fi one of your favorite genres? Any particular films or books that influenced your work? Would you consider yourself a sci-fi fan? Are you a replicant? (Full disclosure: I’m a total geek.)

These days I’m more into Science Fantasy than Science Fiction. I love the lack of technology in the stories, demons rather than aliens, magic rather than hi-tech, genuine face to face relationships with Gods. That’s the kind of thing that I’m working on. Science Fantasy has some fantastic writers, my favorites being Steven Erikson, Ian C. Esslemont, and Glenn Cook. I am a sci-fi fan when it comes to films or TV shows but I have read very of it little since my early 20’s.

You recently worked with Battles. Any other acts that catch your eye today? Any potential future collaborations?

I have a very passive attitude to such things. It’s very important for me, due to my own insecurities and lack of confidence, that I feel the people I work with genuinely want to work with me so I never go looking for collaborations, I wait for them to come to me. If people seek me out then I can be sure they really want it to happen and that they see some value in what I can bring to a project. That helps me over the inevitable confidence crisis of working outside of my own little world and comfort zone. The Battles collaboration was particularly interesting to do, the track and the video for it, and I was very pleased with the end result. They’re a great band.

You’re currently working on its follow-up, Splinter. What can we expect from this LP? Do you plan to evolve the sci-fi concept some more?

Splinter is the working title, don’t have a finished title for it yet, and my intention for it is that it’s the heaviest, most aggressive, most anthemic and relentlessly powerful thing I’ve ever done. I want it to feel more like a sonic onslaught than a listening experience. I’m very excited about Splinter. The feedback for Dead Son Rising has been very positive and getting Splinter out as soon as possible in the wake of DSR feels as though we can carry the momentum on to a wider audience. I think Splinter is going to be a pivotal album for my career, one way or another.

With the festival season coming to a close, and 2012 around the corner, what are your plans for touring next year? Any locales you’re scouting?

We have a very clear touring aim once Splinter is out, a series of tours in fact that will promote both Dead Son Rising and Splinter around the world. Our aim is to hit pretty much everywhere that will have us, including many regions that we have not been to before. We tour hard and long, then take a breather sometime in 2013 and take stock of what has worked and what hasn’t, and then do it again but in key cities, and so consolidating what we did in the previous 12 months and reinforcing those places that need more push. In the past, my album promotion and touring has been very sporadic and this has not helped at all. With DSR and Splinter we intend to do it properly.