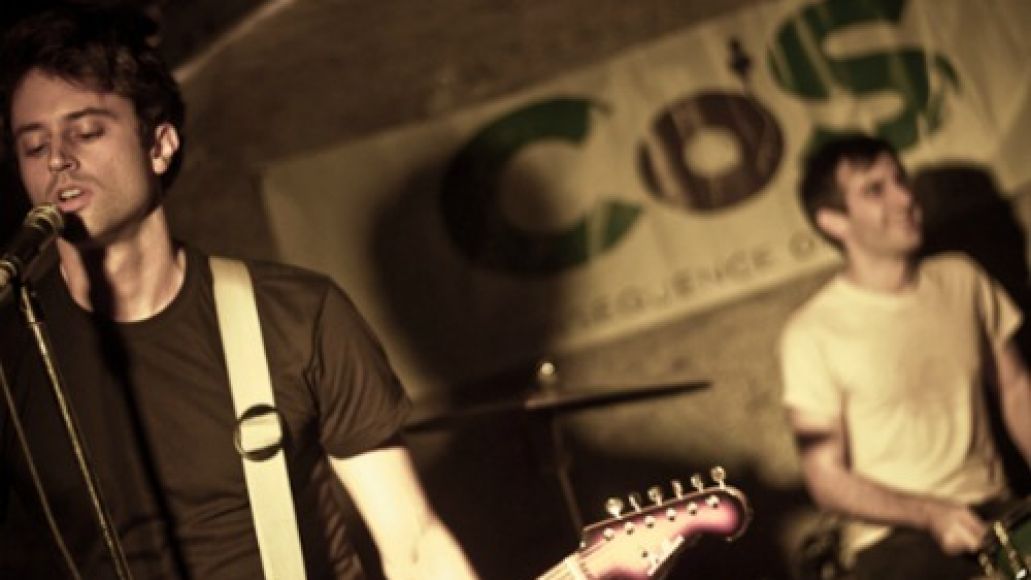 There’s musical signs of life every night in NYC, as the locals are exceedingly quick to tell you. “Well, this is basically just like every night in NYC, so I don’t see what the big deal is about CMJ.” In spite of how insufferable that was to hear like four to five times a day, CMJ was indeed something special especially when you have that many signs of life coming together in one area to “showcase” their talent at “parties”.

CMJ Music Marathon may still stand in SXSW’s shadow, and probably for the better. The atmosphere of CMJ always feels more focused on music mainly due to the vibe of New York City. The rush and din of the city becomes the momentum that pushes you from one venue on to another one, into a cab to Brooklyn to the Cameo Gallery and then back to Pianos for a late night set. In Austin, it’s more like a bazaar of music, but at CMJ it’s galleries of music (actual art galleries not being precluded as venues, either).

Some highlights from the days, as observed by myself and Ben Kaye, are on display below. If you’re not onto these following bands, they definitely have our CoSign and they’re worth putting in your figurative of hopefully literal rolodex, and most assuredly can’t-miss shows whenever they are in your town. 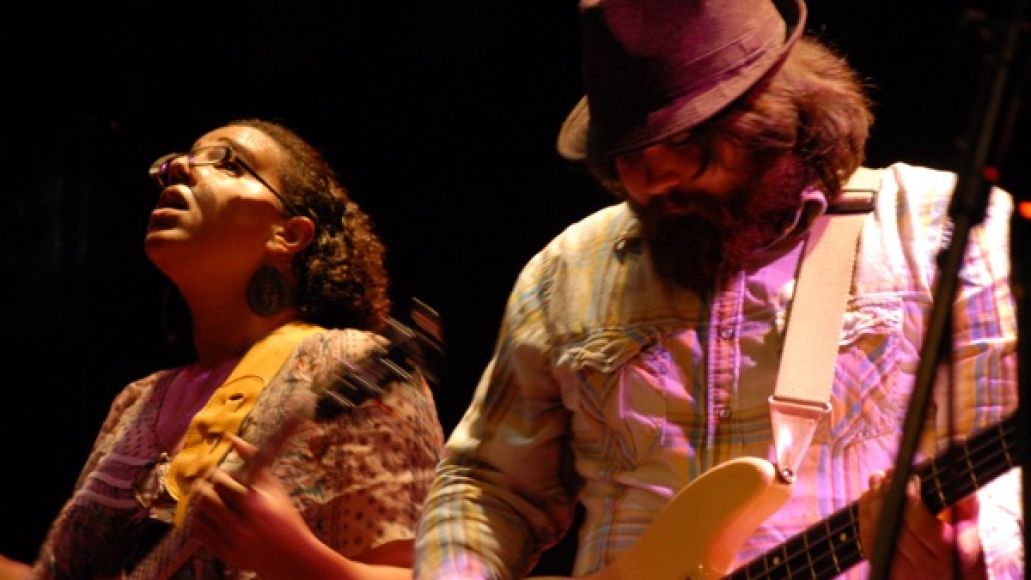 If they hadn’t told you, you probably wouldn’t have known this was the Alabama Shakes’ first gig in New York. The Bowery was packed to the brim, fully engaged by these Athens, AL soulful southern rockers. Drummer Steven Johnson may have had an overly tight style, but watching guitarist Heath Fogg and teddy-bear of a bassist Zac Cockrell lose themselves in the blend of swimming blues and thumping rock, you had no choice but to flow with them. It’s front-woman Brittany Howard, however, who brings things home and sets this act high above others dabbling in similar styles. Her voice is simply huge, a rival to any of the great soul singers. Jaws dropped and jabberers shut it when she belted those deep, full, often gritty notes, especially on standouts “You Ain’t Alone” and “Hold On”. With the most attitude and energy of the band, Howard is the one who’s going to propel this band toward future success. –Ben Kaye 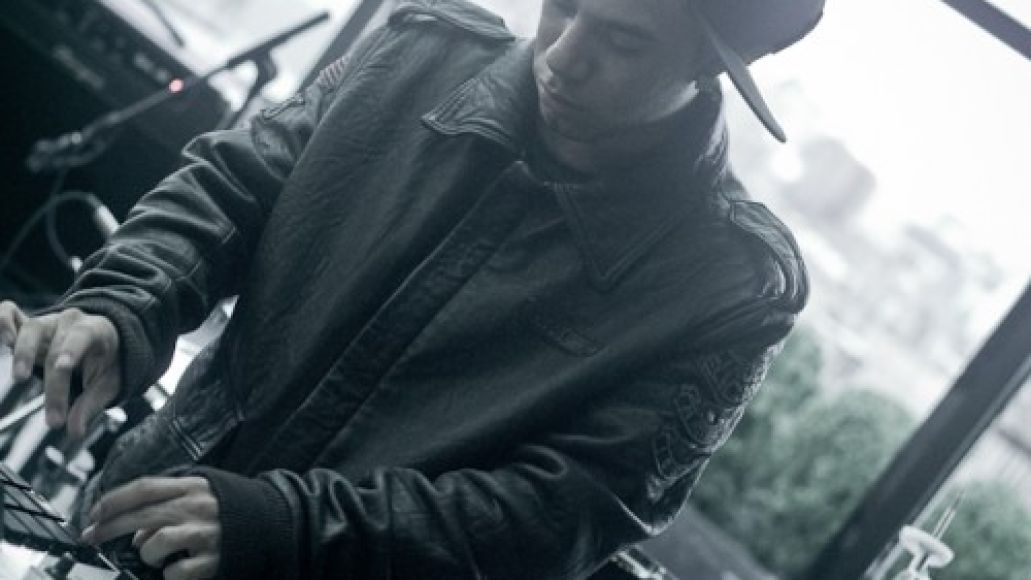 AraabMUZIK may be the first prog-MPC player you’ve ever heard of. His fingers dance around the thing like it’s an extension of his body, like he built the thing, like he grew up living inside of one, like he may actually transformed from one himself. The diminutive and verbally sparse AraabMUZIK (born Abraham Orellana) has the aura of a secret weapon, unassuming and easy to dismiss, until you see him in action and he just whoops everyone’s ass (ok I’m thinking of this guy if you really want to know). Figuratively, he did just that during his set of genre-warping hip-hop beats made on his MPC. -Jeremy D. Larson 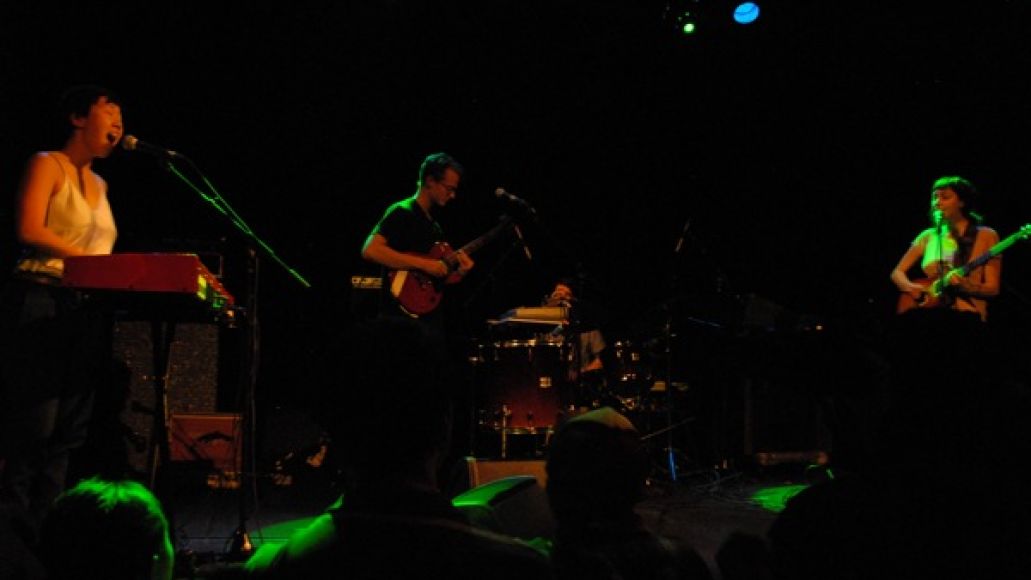 “I caught the flu yesterday, so I feel like a million bucks,” singer Raphaelle Standell-Preston sarcastically confessed at the start. “But we’re going to try our hardest.” Braids’ hardest was more than enough, as the art rock, shoegazey quartet crafted unparalleled ethereal soundscapes. “Lemonade” felt like a rain forest drizzle, and the swirling dream of “Glass Deers” was nothing short of mesmerizing. Standell-Preston’s vocals were clear and crisp despite her ills, and the vocal and intricate instrumental support she received from keyboardist Katie Lee, drummer Austin Turfts, and everything-man Taylor Smith rounded out a performance that really boiled down to a word: beautiful. -Ben Kaye 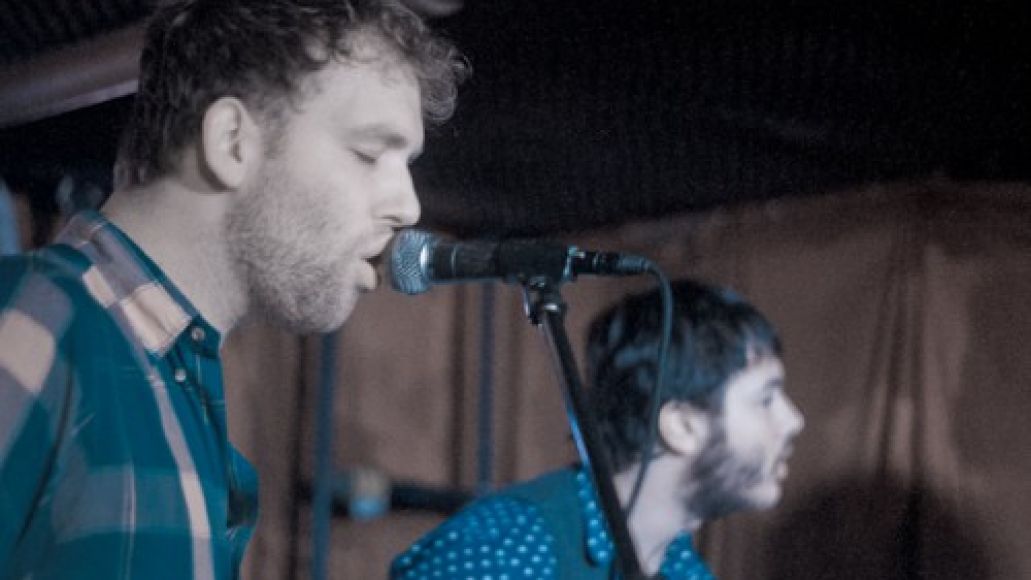 I believe the whole “10 shows” thing is not a gimmick, it’s passion. From seeing them in Chicago muscle through a set without their drummer to catching their show at The Delancey precisely in the middle of their whirlwind run, I’m ever impressed with the pluck of and assuredness of the band. Caveman ground themselves deep in their songs, and have a sound so ergonomic and warm that it rings with the confidence of aged musicians and the eagerness of teeth-cutting rookies. Even with delicate harmonies and instrumentation, they brandish just enough edge to connect through the end of their longer jams. It’s like the Brooklyn indie by way of not being effete, detached, or pretentious about any of it. -Jeremy D. Larson 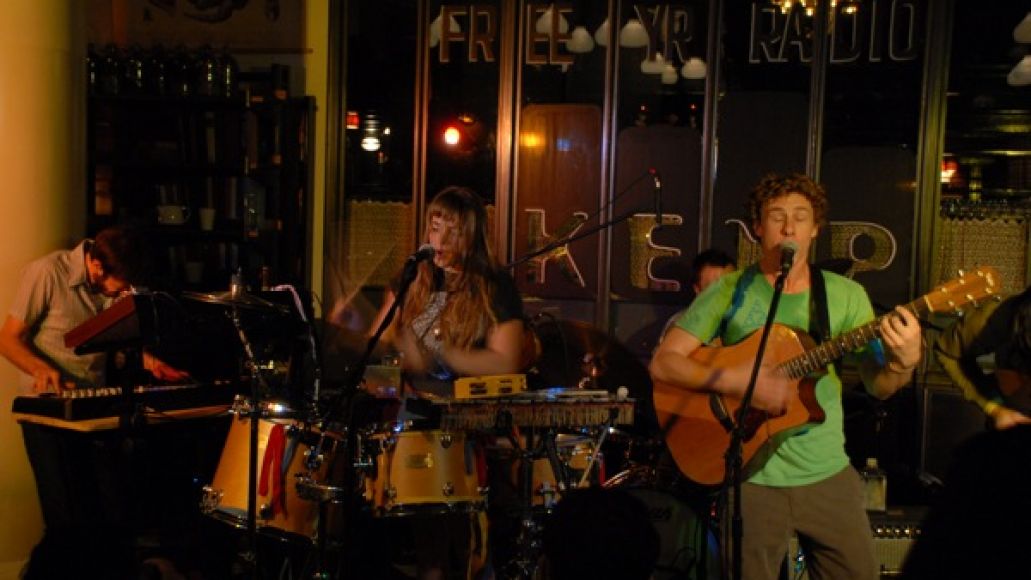 It was a strange thing standing next to a pair of stuffed badgers in the lobby of a hotel waiting for a band to perform, but when Givers launched into their set with “Up Up Up”, the odd surroundings faded away into an engaging performance. The exuberant indie-pop fare of this Louisiana quintet was bolstered by the instantly appealing duo of Taylor Guarisco and Tiffany Lamson at the front. Their joy was perverse, at times even frightening, with both their eyes rolling deep into their heads and tongues sticking far from open, smiling mouths. Though the space and time allotted them were small, they stretched songs like “Meantime” and “In My Eyes” with unexpected jams and bounded with endless energy, turning a brief four-song set into a Marathon highlight. I can only imagine what they did with their full sets later in the week. -Ben Kaye

The Grates – Saturday @ The Delancey Downstairs 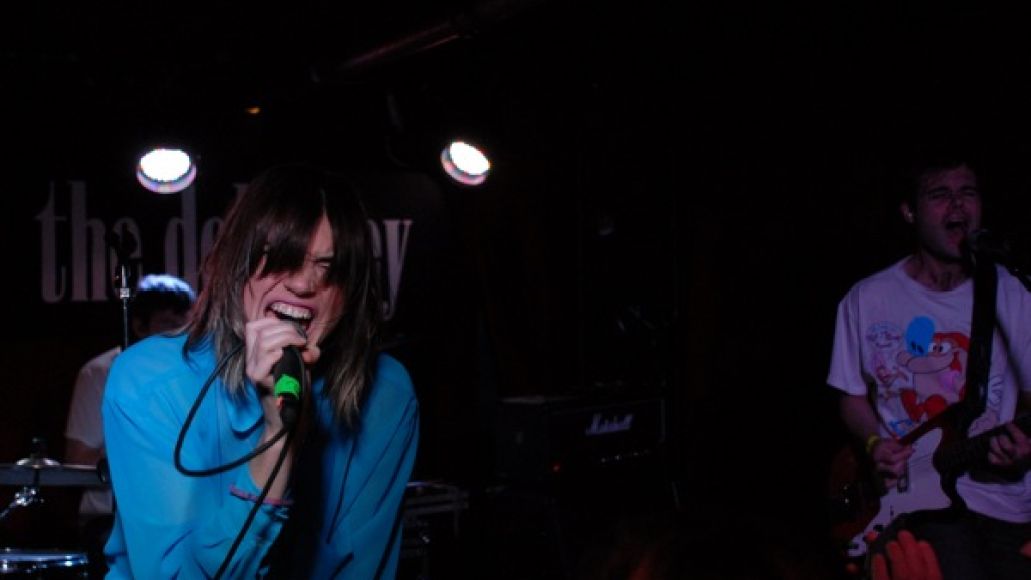 The Aussie BBQ brought a show-stopping surprise with the alternative duo The Grates. Hailing from Brisbane, they’re like a catchy mid-late ’90s guilty pleasure without any of the guilt, reflected in guitarist John Patterson’s Ren & Stimpy tee. Patience Hodgson is everything you want in a frontwoman; she loves her audience, loves banter, and hates standing still on stage when there are plenty of monitors to jump off and a crowd to dance with. Her unforced smile was ceaseless and rapturous, and with her jackrabbit energy she had more fun than any single performer of the week. The pair-plus-touring-drummer pounded through a set of seven straight standouts, notably the introspective “Change” and the slyly sexual “Turn Me On”. Hodgson informed the audience Aussies call ‘cool’ people “legends; because they’re mythical,” and The Grates certainly are. Though recently relocated to New York, they don’t tour the states often. When they do, however, they are not to be missed. –Ben Kaye

The Stepkids – Friday @ The Delancey Downstairs 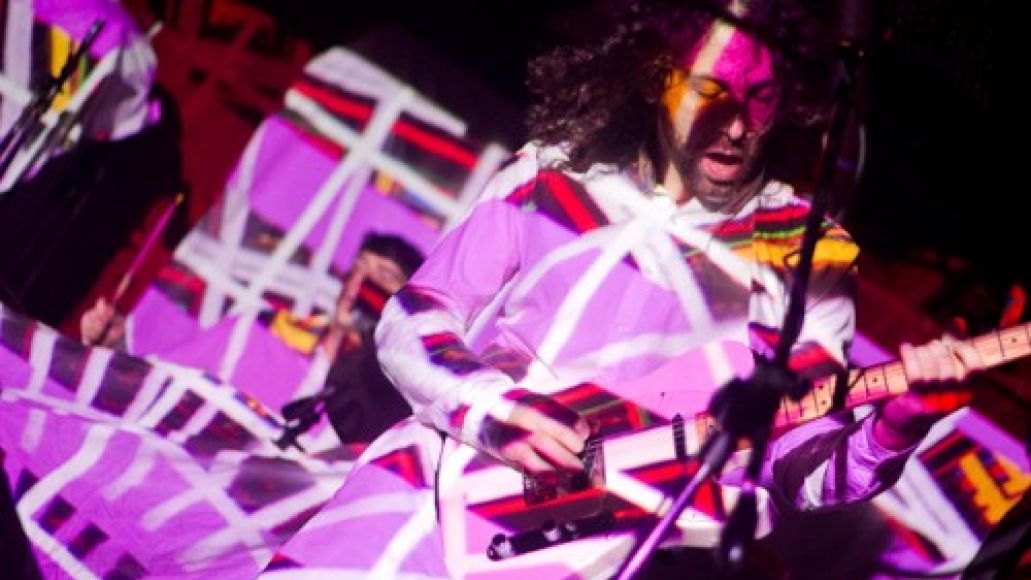 The Stepkids managed to call up so much of Funkadelic’s Maggot Brain and Jaco Pastorious and whatever else you want to put in the 70’s funk-psych vibe in the most sincere and impressive way that it was one of the few shows that had the heart and soul to match the technique. In the live setting, psychedelic projections spun and swirled on the band aiding in the funky hypnosis the trio aimed to conjure and in the dark basement of The Delancey, the trio succeeded. -Jeremy D. Larson 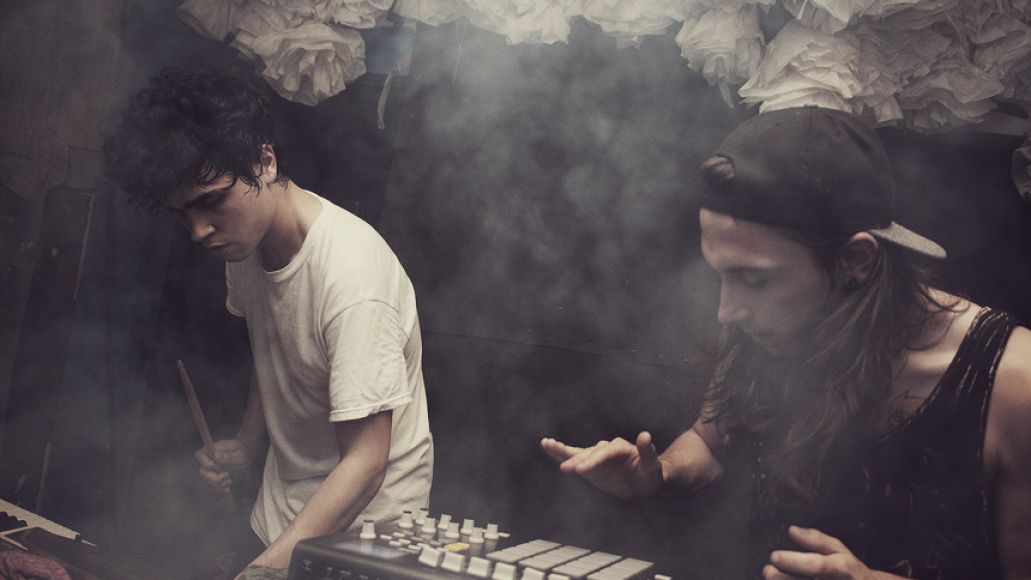 Supreme Cuts, hailing from Chicago, played a non-stop 50 min set to a very packed Pianos crowd Friday night, and just as they bobbed and weaved as they played their intricate experimental hip-hop-inspired beats, so did the crowd. The group take dirty south beats into a science lab from the future and drop some crystalline crunk — delicate and alluring — that plays with tension and builds in an understated yet still kind of clubby way. And live, as the two bop-it, twist-it and turn-it on a rack of equipment, the mood is always in service of a good, populist beat. -Jeremy D. Larson 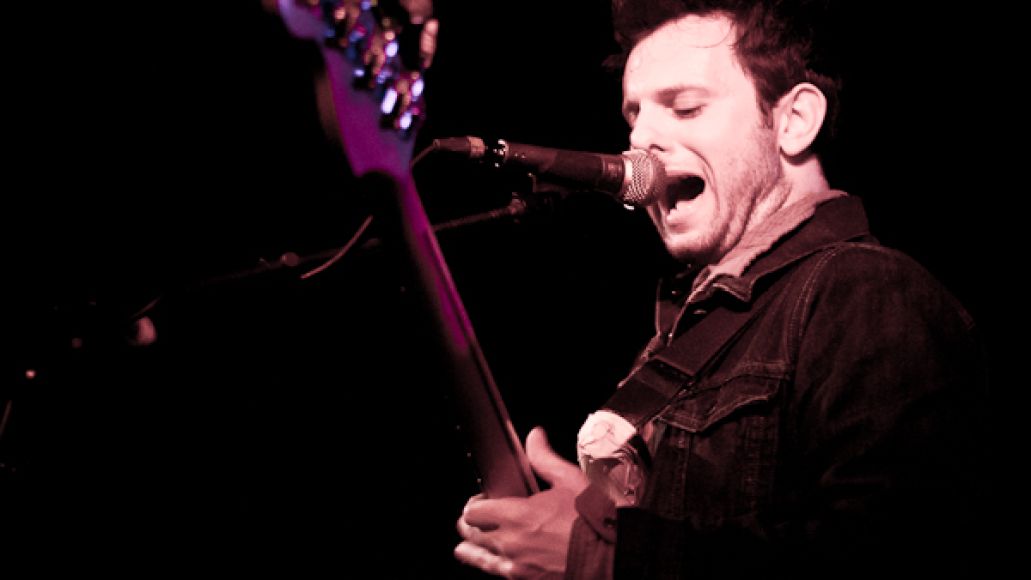 Just goes to show the power of high-test blues rock still has over just about everyone. Much like Alabama Shakes, there’s an indelible imprint The Stone Foxes make live, even if you may not find yourself wanting to boogie to the album on headphones. They’re firecrackers on stage, destined for great heights. And when you can get me to pay attention to a genre I generally am sick to death of, it’s a sign of some quality, psychy, bluesy hard shit coming from them. In fact, when they chanel some Queens of the Stone Age and more jammy stuff, they hit their peak. But considering they can rest on The Black Crowes thing easily and confidently, it’s a sign of a band who’s eager to explore and eager to play with everything they got. -Jeremy D. Larson 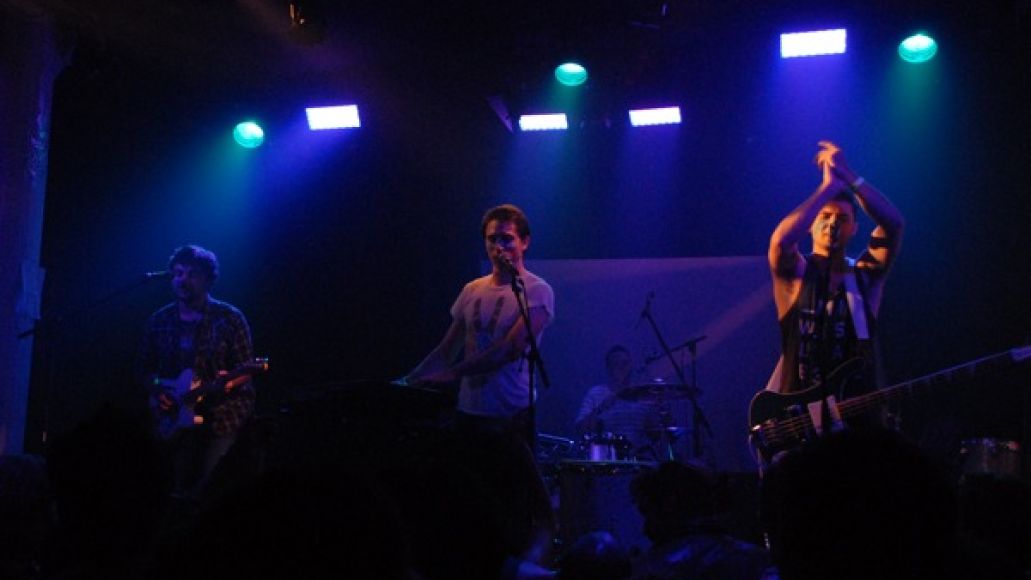 When last I saw this group of Cincinnati, OH indie-dance rockers, Walk The Moon felt like a group of young kids just having a damn good time. A few months later, and they’re a tight unit of seasoned party starters. Their face-painted contingent of fans eagerly awaited the start of the show, and when lead-vocalist Nicholas Petricca entered saying “Let’s dance” before jumping into “Lisa Baby”, the party was on. The band’s endless energy was flat-out infectious, kicking and jumping about with raucous, in-your-face gusto. As a birthday treat to some crowd members and family of the band, they pulled a completely surprising cover of Fleet Foxes’ “White Winter Hymnal”, successfully dancing the hell out of it. The only downside was having to shorten their set due to the whole event running behind, which meant cutting “I Can Lift A Car” for fan-favorite “Anna Sun”. Recently signed to RCA, the future for these exciting up-and-comers is as bright as that song’s namesake. –Ben Kaye