Dating from 1912, the impressively grand Central Hall Westminster has its roots as the headquarters of the then Wesleyan Methodist Church, though it was always conceived as an inclusive, if alcohol free, building available as a meeting place for everyone, irrespective of religious persuasion. The Great Hall is the centrepiece of the structure. Surrounded by deep, seated balconies on three sides and with an expansive floor area set for standing, the room lent an air of austerity to Wednesday night’s events as an assembly of possibly the most polite people in the galaxy eagerly awaited the entry of their princess – that, of course, being the doyenne of British nu folk, Laura Marling.

Part of the singer’s landmark UK cathedrals tour, oddly this was the only date not physically played in a cathedral. Then again that might have something to do with the relative difficulty in hiring St Paul’s or Westminster Abbey. Whatever, it still made a fitting and imposing venue. Accompanied by her six-piece band, Laura Marling took the stage with her customary bashfulness, yet began confidently enough with two songs plucked from her latest album both received with warm restraint from the floor and gallery.

It wasn’t til the crowd-pleasing “Ghosts” from her earliest record, Alas I Cannot Swim, that a few in the sold-out crowd felt charged to let out a whoop or holler. Modestly decked in a red turtleneck sweater, black ankle length skirt, and white sneakers, Marling’s pure vocals cradled by rich band harmonies reached every corner of the vast hall. She demonstrated she could step up the volume at will without overstretching her voice and the song climaxed with a short Mumfords style workout, drawing a strong crowd response. The upward curve continued as Marling’s vocals glistened on “Don’t Ask Me Why”, underpinned by deep, searching cello. A neat bridge then segued the song into “Salinas”. The singer had to battle for supremacy over the increasing volume employed by her band as the song reached its steadily built crescendo, yet still stole the honors. 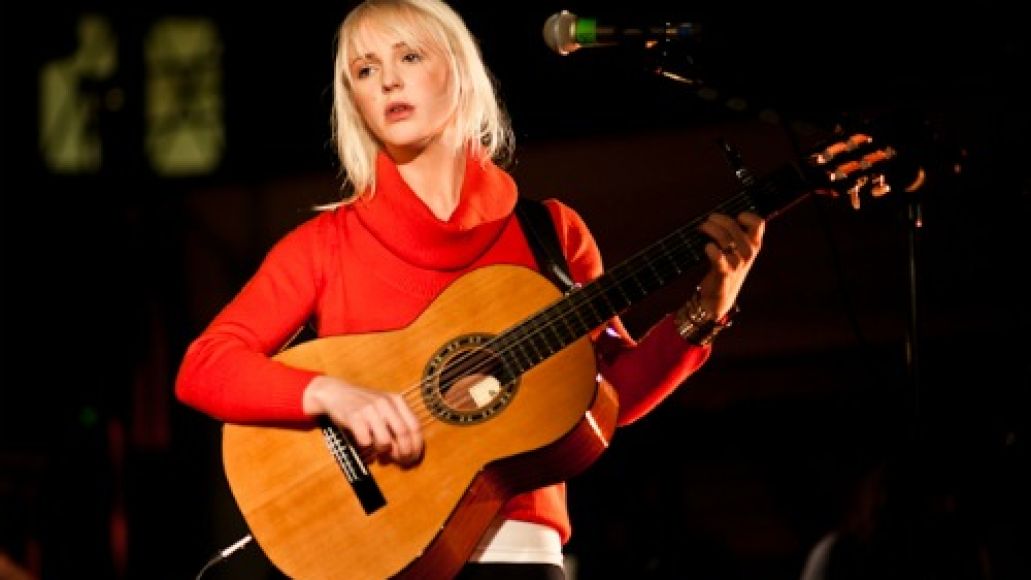 Red light cast a devilish look across the broad stage as both singer and band got stuck into “The Beast” but possibly missed a trick by sticking pretty rigidly to the album arrangement on a piece that could have taken an extended, even rockier live conclusion. Offering a tender contrast to beastdom, Marling was then left alone to deliver a five-song solo set. Opening with a gorgeous airing of “Goodbye England” from her second album, she toyed with the melody a bit here and there and embellished it with her resonant guitar work. It was pin drop stuff and deserved a bigger ovation. The mini-set certainly showcased her guitar skills and her use of open tunings gave the songs added reverberation.

“Night Terror” included a surprisingly adroit whistling solo while a new song, “Pray For Me”, provided another highlight with a memorable ascending guitar phrase growing ever more hypnotic as the song developed. Ending this section with the Leonard Cohen-like “Night After Night”, Marling made the song come alive with passionate vocal crescendos and really nailed her live connection with the audience. This was an assured, controlled performance by an artist at the top of her game. The set list had been carefully crafted to maintain studied variety and the band made a seamless return on “My Friends” before each took a metaphorical bow. Aside from telling us it was her drummer’s 34th birthday, Marling introduced the band in novel fashion, giving each member a little microphone time to dispense a chosen fact about Central Hall. We learned, for example, that Mahatma Gandhi spoke in the Lecture Hall in 1932; while looking up at the magnificent, yet scarily large, dome above the Great Hall, it was reassuring to hear that the building saw the pioneering use of reinforced concrete. 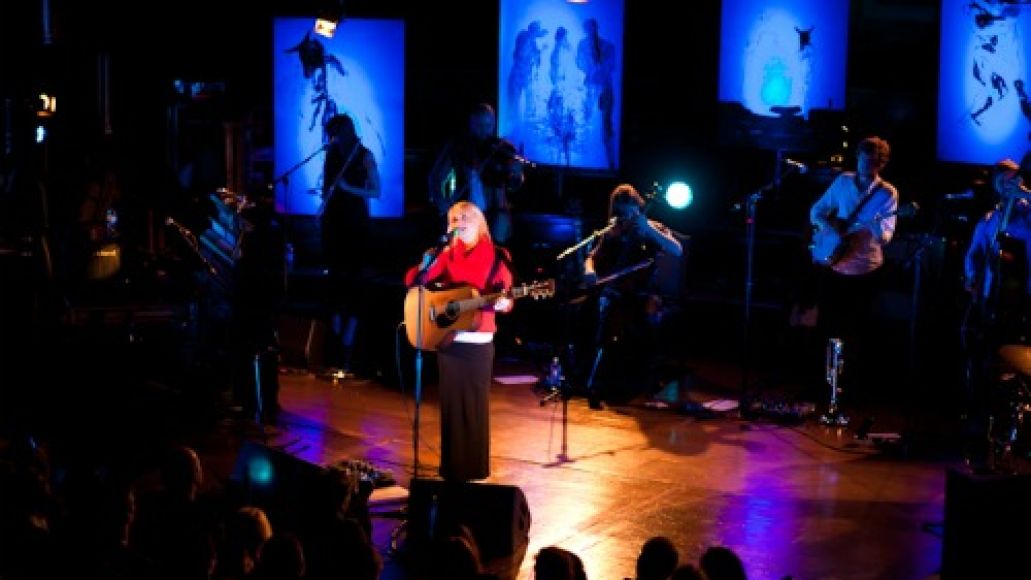 For me, I could have taken a couple more choice cuts from I Speak Because I Can as the evening reached its zenith, but we were at least treated to the haunting title track heralded by an energetic “Rambling Man”. Either side the glorious hoe-down of “Sophia” and a rumbustious “All My Rage” provided more evidence of Laura Marling’s burgeoning talents as a songwriter, singer, and musician.

Setlist:
I Was Just a Card
The Muse
Ghosts
Don’t Ask Me Why
Salinas
The Beast
—
Goodbye England (Covered in Snow)
Night Terror
Pray For Me (New Song)
Flicker and Fail
Night After Night
—
My Friends
Sophia
Rambling Man
I Speak Because I Can
All My Rage
——