Six months ago, when we last reported about an Odd Future Wolf Gang Kill Them All show, the boisterous West Coast rap clique was just beginning to really turn heads. Since then, they’ve been notorious worldwide for a few months, and their leader, Tyler, the Creator, nabbed Best New Artist at this year’s VMAs. So it was no wonder why there was an incredible degree of excitement for the insanely hyped group preceding their Wednesday night show at Minneapolis‘ fabled First Avenue; chants of “Wolf Gang! Wolf Gang!“ could be heard over an hour before showtime. And since the crew has huge aspirations – Tyler has said he wants to play the Super Bowl halftime show someday – that was great for the fans and OF itself, and indicative of the show ahead.

Because OF has released hundreds of songs over the past few years, a lot of solid material had to be left off the setlist. Fortunately, though, each member had a chance to shine, which provided a nice balance. During the most riotous moments – “French”, “Sandwitches”, “Bitch Suck Dick”, and “Radical”, all of which were bolstered by Tyler – the crowd went absolutely bananas. Intermittently, the perpetually overlooked Mike G and Domo Genesis took the limelight, and their spaced-out styles gave way to some much-needed relative calmness. Mellowhype members Hodgy Beats and Left Brain also did their thing, and DJ Syd tha Kyd spun a set before the show that included hits by Waka Flocka Flame and Chingy. (And yes, Earl Sweatshirt was nowhere to be found.) 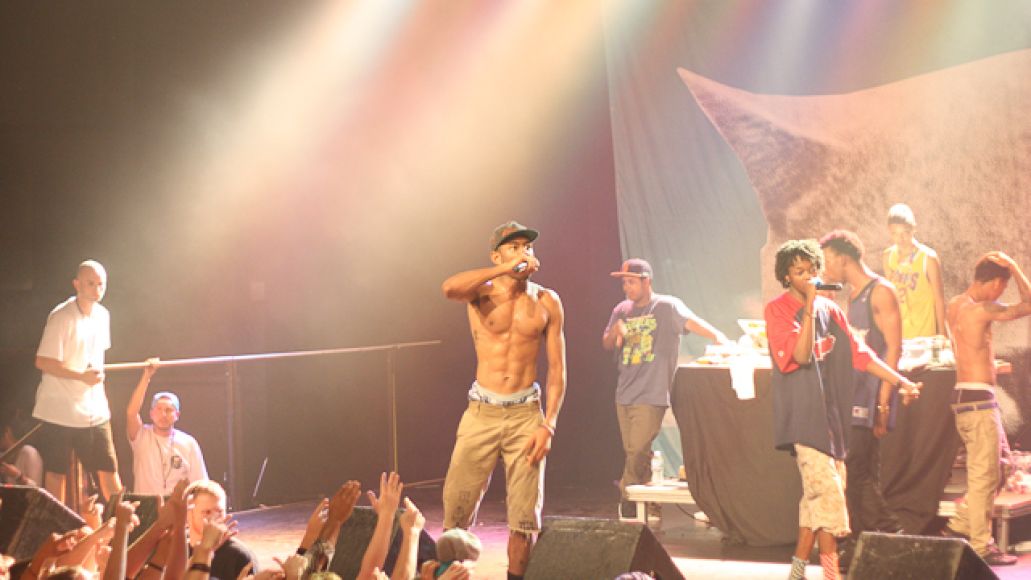 Since the Odd Future kids are about the same age as most who attended the show (to wit, 18-21), they had no problem playing to the audience’s collective sense of humor. The banter between songs usually involved making fun of somebody in the audience or tersely quipping about illegalities; for example, after Left Brain copped some weed from a few people in the crowd, sideman Jasper Dolphin yelled, “So who’s got crack!?“ Plus, Tyler and Jasper yelled yo’ momma jokes at each other for about two minutes near the end of the show. Yeah, it was a fun time.

Best of all, not a moment of the show seemed contrived. After growling his way through the (hopefully) satirical “Bitch Suck Dick”, Tyler said, “I know some niggas hate that song, but performing it is fun as fuck.” Though inconspicuous, it was an illuminating moment: These Odd Future guys are trying to take over the world, but they’re also making sure to enjoy the hell out of the conquest.