UK five-piece rock ensemble The Duke Spirit has been working the circuit for eight years now, building a faithful following by plying what is extremely good though not necessarily the most commercial music. Seeing them squeezed into the tight, black hole that is the Camden Barfly in North London immediately makes you wonder why this band is not playing much, much bigger venues. The Duke Spirit filled the small venue’s stage and more, with charismatic frontwoman Liela Moss bossing proceedings with real authority. In her billowing black t-shirt, sprayed-on black leather leggings and boots, Moss is almost the prototype rock chick. Few though have the voice to match the look.

The band kicked off with the title track from their debut album, Cuts Across The Land, and it set a tone for the loud, raucous, yet fully controlled set. Bands who think they are tight could take a lesson from drummer Olly Betts and bassist Marc Sallis, with Betts also finding space to add some assured harmonies. The epitome of non-flashy, the Spirit’s great rhythm section set up an honest and solid platform for guitarists Luke Ford and Toby Betts to mesh together in some awesome interplay. Moss rose above the wall of sound with stature and grandeur, her powerful vocals cutting through the thick air (thank you, overworked smoke machine). Despite the confined space, the singer stomped and swaggered, worked percussion, wrestled with her mic stand, and swept her considerably long blonde hair up and over her face to create a blinding image in a sea of black.

The pace was almost relentless throughout the band’s 13-song set, largely pulled from their new album Bruiser with a smattering from the earlier two. Breath was only really drawn during “Villain” as Moss took to the keyboard for the sparser, emotive ballad that then built to another searing climax. The singer sported a large dress broach in the shape of a Pharoah, which glistened and swayed as she stormed her way through the impressive “Surrender” and “Everybody’s Under Your Spell”. 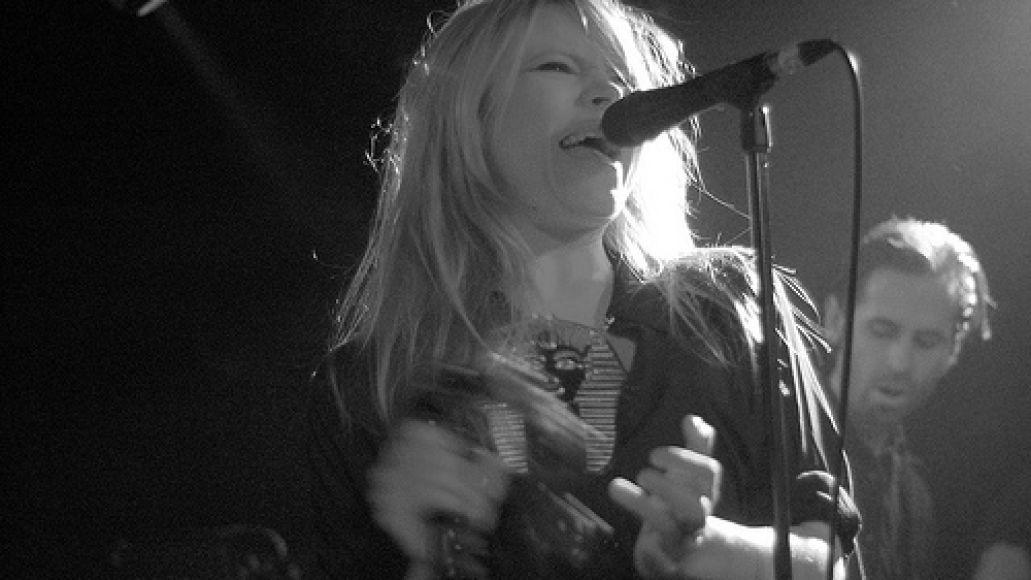 The volume rose steadily towards the end of the set and through the encores but Moss came across as strong at the end as she did on the opening song. Her guttural delivery gave her voice a distinct Northern European inflection that worked especially well with the backdrop of controlled distortion emanating from the guitars. Her vocal was heard to great effect on the first encore, the anthemic “This Ship Was Built To Last”. Unfortunately, an annoying strobe light took the edge off the final encores for those of a nervous disposition, though some didn’t seem to mind – especially the guys by the front of stage, who were too busy reinventing idiot dancing to notice such a diversion. All in all it was a compelling performance from a band that has matured into an impressive live act.

Setlist:
Cuts Across The Land
Cherry Tree
Procession
The Step And The Walk
Villain
Don’t Wait
Northbound
Surrender
Everybody’s Under Your Spell
De Lux
Bodies
You Really Wake Up The Love In Me
Love Is An Unfamiliar Name
Encore:
This Ship Was Built To Last
Fades The Sun