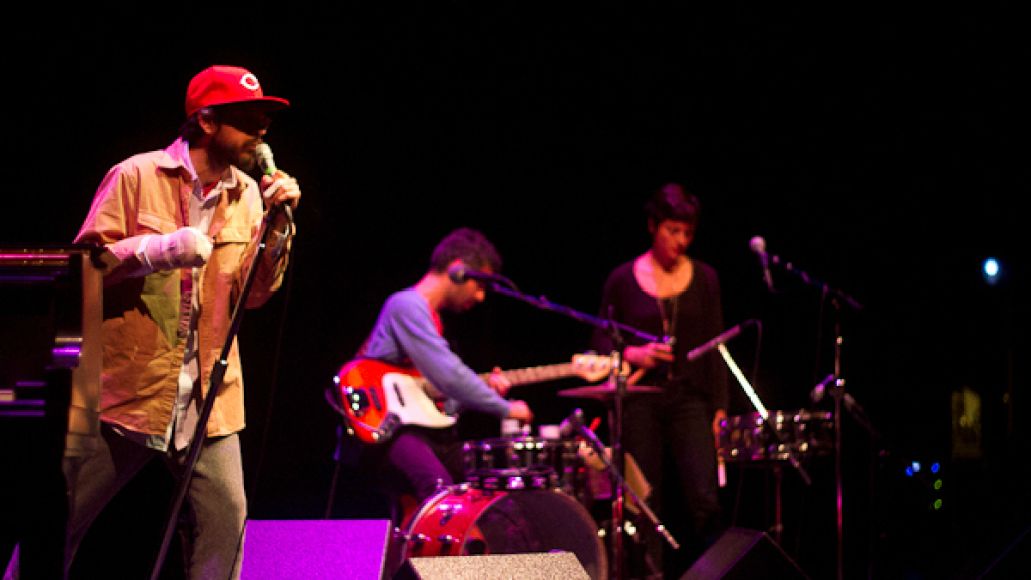 And like that, their US tour was over — Why?’s last stop on their US leg became their first and last stateside gig. What looked like a nasty broken arm for lead singer Jonathon “Yoni” Wolf put the kibosh on the previous dates, and left the band with a doubleheader one-off gig at the Museum of Contemporary Art Chicago. Whether it was the rarity of the show, the rapt crowd sitting inside of the theater/lecture hall, or the excitement of hearing new material, the show felt important. I don’t think it was artificial. And for a band whose M.O. is to remain fairly detached from easy emotions, the impact of their performance surprisingly belied their MFA hip-hop flow.

Opener Serengeti (comma Dave), label-mates with Why? on Anticon and Chicago native, fell short of connecting on a level that wasn’t lackadaisical irony. It’s hard to get into an MC when much of his set involved him sitting on a stool fumbling around with a recorder. The incessant winking that accompanied Serengeti’s songs is hard to stomach these days and it would behoove him to inject more morsels of truth and heart into his raps if he ever wants to elicit anything beyond a smirk or a self-congratulatory chuckle. Either that, or go full out performance art and disconnect completely so there’s some sort of academic pleasure in observing hyper self-aware hip-hop. See, this is the kind of analysis that happens when hip-hop is spat in a lecture hall, all full of attentive white people. 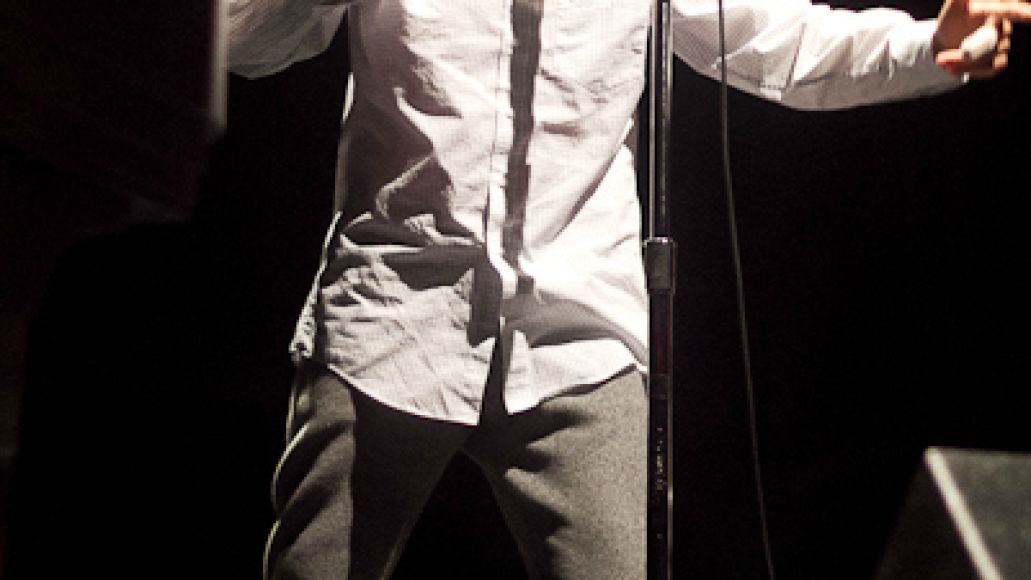 But Why? did a better job at transcending both the inherent limitations of the venue and unpacked their songs in a fresh way that didn’t sting with sarcasm at every turn. Seeing Yoni Wolf out there in a cast, sweatpants, and wrinkled off-brand Ralph Lauren shirt already made you want to root for the underdogs (and buy him a new shirt), but Why? had their shit on point. “We’re gonna play a lot of new songs” Wolf said, as he checked in with the rest of the band, now a quartet with added member Liz Wolf helping out on background vocals and percussion.

The new songs, predictably and happily, played like a healthy blend of the early hip-hop centric Why? and the indie-rock leanings that they took on their 2009 album Eskimo Snow. It brought back this old feeling: Wolf is simply an underrated MC. His adenoidal tone may deter people looking the most hood-ass shit or worse insinuate a false connection to nerd-core, but it’s not the least bit stiff. It’s expressive, emotive, smart, locked down, and supported by a tight three-piece ensemble of grand piano, snare drum & hi-hat, and bass. You do have to put your elbows on your knees, as it were, to ride alongside Wolf’s lyricism and word play – and being seated in a theater worked in Why?’s favor for the crowd to absorb the new material. On one poly-rhythmic, bittersweet, emotional new jam, Wolf was left repeating the words “And always reminds me of you.” Don’t know what song this is, but it surely will be standout on their new album, which according to Wolf is “almost done.”

Even though the set up felt a little too MTV Unplugged, or more accurately Inside The Actor’s Studio, Why?’s former material still kicked. Mid-set highlight “Hallows” got heads nodding and the evening was bookened with opening song “These Few Presidents”  and an encore performance of “By Torpedo or Crohn’s”. The sing-along in the finale may not have been the most epic rally of support, but for Why? fans who are known for their proto-hipsterisms and steadfast ennui, it wasn’t too shabby. Break legs—erm, good luck in Europe.

Live Review: Why? at Chicago's Museum of Contemporary Art (10/15)