By this, the final stop of their stateside tour, Wild Beasts have spent the better part of the past few months conquering much of Europe and North America with the subtle charms of Smother, their third full-length. The Kendal, UK four-piece’s music falls somewhere between grooving post-punk and hazy dream pop with flecks of Kate Bush-inspired flair and latter-day David Bowie experimentalism thrown in for good measure. Smother adds an array of new styles and tricks to their palette, vastly expanding on their sound while retaining the airtight, self-contained intimacy of its stellar predecessor, 2009’s Two Dancers. Even though it’s one of my favorite records of the year thus far, I didn’t have much hopes for it in a live setting: the intricate rhythms, Hayden Thorpe and Tom Fleming’s vocal interplay, and the music’s ostentatious nature would be exceedingly difficult to replicate faithfully, at least without coming off as overtly swanky and pretentious; I half-hoped/expected Wild Beasts’ members to emerge in tailcoats and top hats. 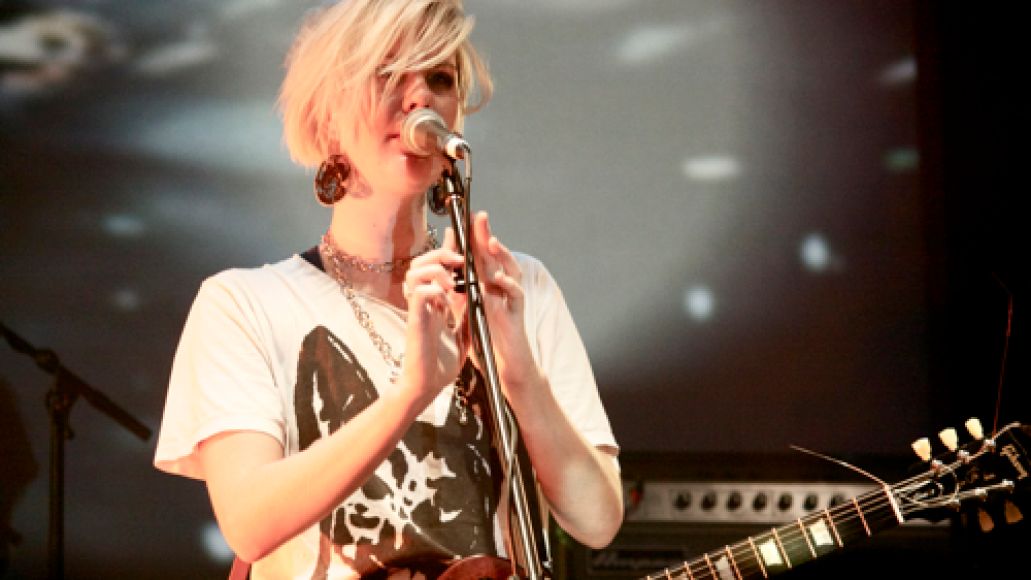 Opener EMA and her band did their thing first, playing choice cuts off of this year’s Past Life Martyred Saints. On record, Erika Anderson won comparisons to the likes of PJ Harvey and Cat Power for her raucous tunes and sharp, incisive songwriting. Live, she played lead over Leif Shackelford on violin, a second guitarist and drums, working up quite the racket for the length of their set. Along with most of Past Life, EMA threw in a memorable-though-kinda-oversold-cover of the Violent Femmes’ folk-punk classic “Add it Up”, trading the original’s leaden strums and sauntering bassline in for a violin freakout and Anderson’s pontifical delivery. They closed things out with “California”, which found Anderson half-rapping spoken word bit about everything she hates about the Golden State (it opens with the couplet: “Fuck California, you made me boring.”) over walls of feedback. The crowd hardly found offense in her disparaging, even cheering at the especially biting bits. 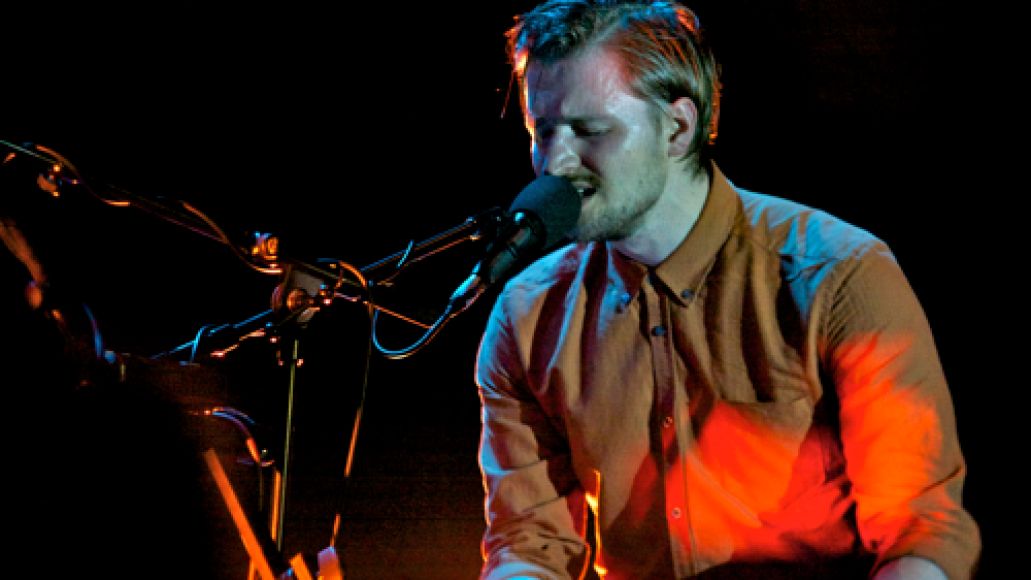 Not ones to be outdone, Wild Beasts got right to it, starting things off to the hypnotic bassline of Smother‘s measured opener “Lion’s Share”. Frontman Thorpe’s quavering falsetto was as uncannily affecting as it was on record, as were the touches of piano he added to the mix, held together by Fleming and Chris Talbot’s hypnotizing groove as Wild Beasts’ rhythm section. Even at their best on record, it’s hard to imagine anyone being able to play and write songs this ornate and elaborate without a fair amount of posturing. It was a delight, then, that even as they brought said songs to life with note-for-note precision, Wild Beasts appeared as candid and uncontrived as could be, effortlessly working through such demanding tracks as “Loop the Loop” and “The Devil’s Crayon” (and, I might add, in attire far from the snazzy get-ups I’d expected; bassist Tom Fleming took the stage in a tanktop and aviators). Thorpe and Fleming traded off between guitar, bass and keys, as well as vocal parts, between songs, contrasting their considerably different voices, as on the slow, grooving chorus to “Deeper”. 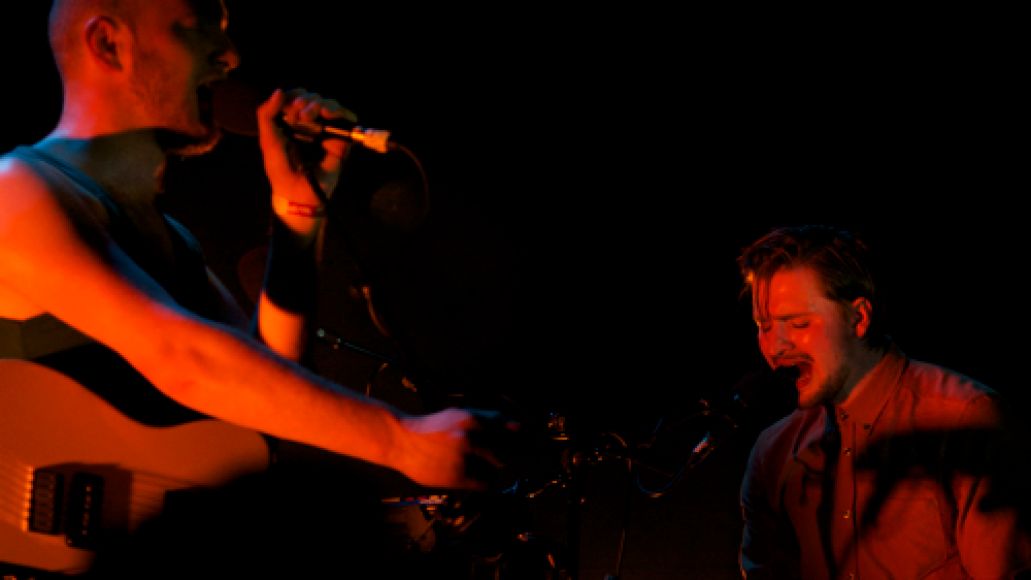 While their setlist favored Smother rather heavily (to no one’s chagrin), they did occasionally look to their first two records for material. The aforementioned “Devil’s Crayon” off of their debut Limbo, Panto has been a fixture on their setlist since their first tour, with good reason. Its unabashed flamboyance and buoyant rhythm offered a glimpse at their heady younger days. “Bed of Nails”, another of Smother‘s many high point, translated impeccably to the stage, its chorus of “oh-Ophelia” somehow catching on with the near-sold out crowd. More highlights came in the form of “Hooting & Howling” and the anthemic “We Still Got the Taste Dancin’ on Our Tongues”, both off of Two Dancers, and the latter of which the band teased the crowd with before breaking into “This is Our Lot”.

After closing out “Hooting & Howling”, Wild Beasts returned with more off of Two Dancers: “The Fun Powder Plot” and “All the King’s Men”. Fleming seemed to relish in the rare opportunity to rise above his low baritone and show off his own falsetto every time the song’s chorus of “watch me, watch me!” came around. “End Come Too Soon”, Smother‘s transcendental final track, made for a rather obvious curtain call song. Its hesitant lead guitar part, courtesy of Ben Little, gave way to Talbot’s thudding percussion. The song’s dramatic verses and Thorpe’s stirring delivery cast it in a rather cathartic light, all the way up until he dramatically cooed its last line: “the end it came and went, too soon.” Indeed.

Setlist
Lion’s Share
Loop the Loop
Deeper
This is Our Lot
The Devil’s Crayon
Two Dancers (ii)
Albatross
We Still Got the Taste Dancin’ on Our Tongues
Bed of Nails
Reach A Bit Further
Hooting & Howling
Encore:
The Fun Powder Plot
All the King’s Men
End Come Too Soon
——