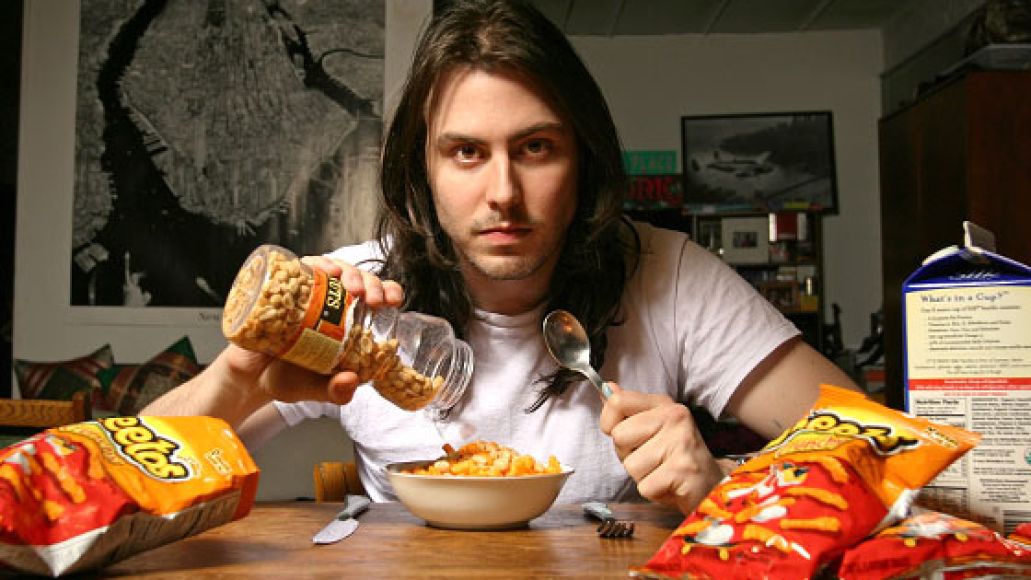 In anticipation of the release, W.K.’s reworked Aoki’s latest single, the Rivers Cuomo-aided “Earthquakey People”, in what’s being dubbed as a Trash remix. True to his rep as the world’s resident party animal, the remix is a blast of uproarious dance punk, infused with the relentless fervor we’ve come to expect from him time and time again. This week, Consequence of Sound sat down with Mr. W.K. for a quick chat on the remix, his next LP, and some of his favorite albums from the year. Also, below you’ll find the debut of said remix. Feel free to soundtrack your holiday dinner with it.

I’m really digging the remix, is that you playing guitar/bass/drums on it?

Yeah, that’s me. I added some things over Steve Aoki’s original track and sped up Rivers Cuomo’s vocal a bit.

How’d you get it touch with Aoki?

We met through some friends at a Dim Mak party in Manhattan three years ago and we’ve talked off and on about doing something. It finally worked out perfectly, Steve asked me to do a thrashy, more metal version of the song. I had this four-on-the floor disco thing planned ‘cause I love that kind of music but he wanted a faster, punk-rock remix and we really like how it came out.

What about Rivers Cuomo? Did you guys work together directly?

No, his part was already recorded but he has always been great. I’ve appreciated his good vibes, you never know anyone takes intense rock music, people sometimes feel intense completion or that they can’t relate to the different styles. And so I really admire his style of playing guitar and songwriting very very much.

Any future plans with either?

Well, Steve and I plan to continue working on other some things, both remixes and new songs. So yeah, I’m really looking forward to recording and performing those with him in the future.

I literally just got done watching your “Go Go Go” video before we got on the phone, what’s the word on that?

Lots going on. “Go Go Go” is a promo single for the World Snowboarding Championships that are happening in Oslo, Norway next year. My friends in Turbonegro and Glucifer recommended me to the Snowboarding Organization as musical ambassador to write original music for the Championships and to curate music parties in Oslo and New York City. The organizers are musicians themselves, and they ended up playing on “Go Go Go” with me. We kicked it all off three days back in NYC, Turbonegro played their first US show in while and I played some songs onstage with the organizers. Right now, I’m recording music for the televised event and then some symphonic bits for the snowboarding events themselves.

Word is you’re working on a new album as well?

Yeah! This winter, my priority is to finish that record up. Also, next year will be 10th anniversary of my first album, I Get Wet. So we’re looking to celebrate that in 2012 with lots of shows, hopefully a world tour.

Really looking forward to that. Last question, what’s been your favorite record this year?

I try to work with with my favorite musicians, and so it’s great when you’re able to collaborate. It’s almost like you will it to happen; that’s what happened with Turbonegro and Steve Aoki. With that in mind, I’ve been working a lot with my friend Aleister X. We’re going to Canada to play some special parties I’m putting on, and we just finished a mixtape called Black Skull Music, Vol. 1. Very dark, raw music that he’s releasing for free online on Black Friday. I’ve been working with him for a long time, there was a time when I swore off playing and even listening to other music because I was focusing on Andrew WK. I’ve learned to open that up, which has allowed for a lot of unbridled physical energy. I’m working with Aleister X because I feel that: to wake up with a  song in your head, with that feeling in you, is really great. Getting to work with musicians or be around people who can bring that is fantastic.

I’m also working with my bandmember, hypewoman, and wife Cherie Lily on “Dripping Wet”, her new single and video, both of which will be out soon. I’ve been serving other people’s musical vision, in the ways that I can contribute in ways beyond my work. Like Bob Dylan once said, “you gotta serve somebody,” we (Alesiter and I) even covered that song on the mixtape, it’s a real special rendition. That song really speaks to me.