By the end of the Girl in a Coma show Saturday night, a leather-jacketed guy was riding piggyback on the top of another guy’s shoulders. It’s a move for an outdoor festival, not a dark and claustrophobic club like Chicago’s Double Door, but the exuberant reaction fit the hurtling barrel of punk, tejano, grunge, and rockabilly the San Antonio trio spun.

Girl in a Coma, signed to Joan Jett’s Blackheart label in 2006, is more than five years into a busy career that has included four albums and a stint opening for their idol Morrissey (who is, via The Smiths’ song “Girlfriend In A Coma”, also the source of the band’s name). Singer and guitarist Nina Diaz, her sister Phanie (drums), and their friend Jenn Alva (bass) recently came out with the album Exits & All The Rest, a follow-up to their all-covers release “Adventures In Coverland”.

Nina controls her full voice like a ’50s crooner, wringing out the slower lines on songs like “El Monte” by chewing them over like taffy. There is no affectation, and the whole band seemed lost in itself. For the greater part of the show, sweat plastered Nina’s hair to her cheeks in swirls that looked like tattoos, and she rarely wiped them away. Girl in a Coma operates as a unit, and while Nina takes the lead with singing, she’s not a dictator. Instead of the typical guitar solo acting as the climax of George Harrison’s “While My Guitar Gently Weeps”, Phanie’s drums took the song on a leash, jerking and pulling the music forward. 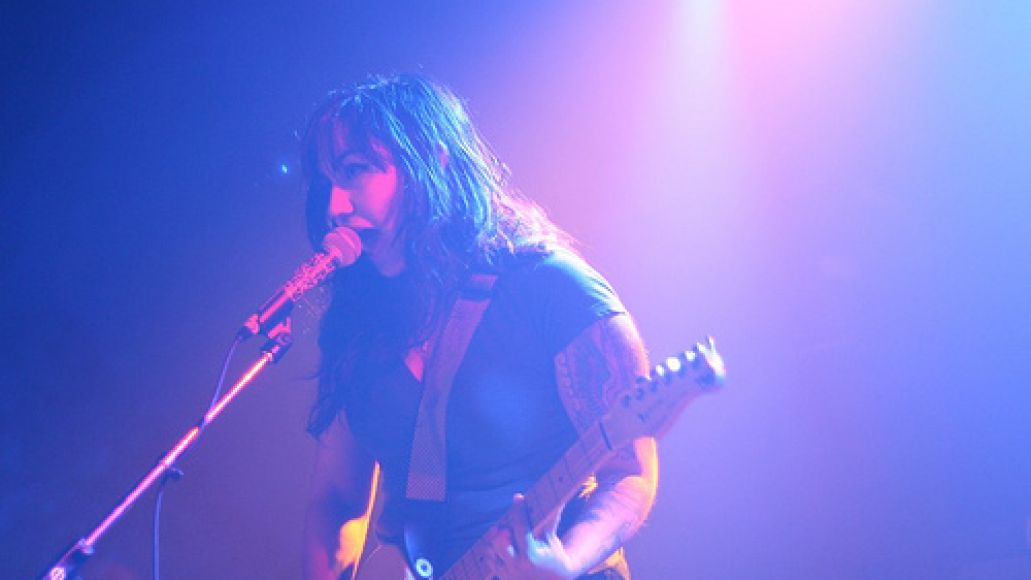 Girl in a Coma was nearly upstaged by the opener, The Coathangers, an all-female foursome out of Atlanta that commands an electrifying presence. They played a devious yin to the headliner’s yang. While Girl in a Coma moved solidly as one, The Coathangers busted out a joyous scramble of barely contained riot grrl garage punk, blithely switching instruments among themselves between almost every song. Their set ended with screams so bent with rage that the audience stood momentarily stunned, glassy-eyed with fear and love.
——