The first night of a tour can really set the tone for the entire trek. Hardcore fans are going to analyze the setlist, sometimes looking to YouTube for video confirmation that the band’s “still got it”. Despite being trapped between jet lagged and hyper, Los Campesinos! put on an outstanding performance in New York’s Bowery Ballroom to open their U.S. leg. It was a concert full of fan favorites, tight deliveries of new numbers, and even some comedic complications.

Before the Welsh band took the stage, however, local talent/”blog band” Headless Horseman hopped on for a series of beat-ridden, falsetto-soaring dub pop songs. Fareed Sajan banged away at pots and pans while Conner O’Neill switched between ukulele and electric guitar. The latter instrument provided a lot more power than the near-inaudible ukulele. With only a handful of tracks released on the web so far, their set was more about the duo’s potential rather than their present arrangements. Whenever they tour behind their upcoming debut album, they should find a drummer to replace the iPod currently used to create many of the beats. Right now, this group is in the wait-and-see category. The performance was rough, but the hooks are buried somewhere in there. 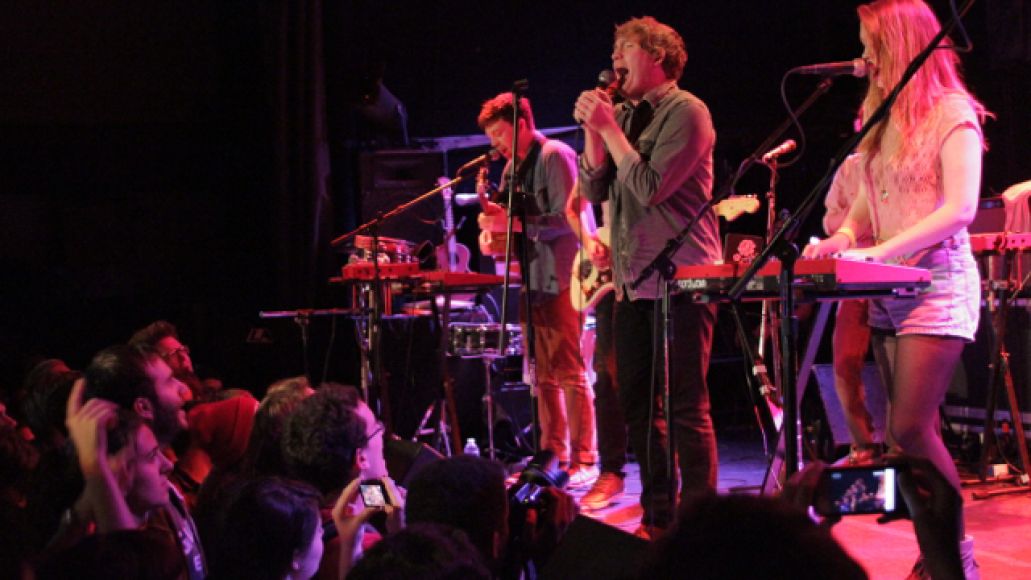 In terms of an opening trio, Los Campesinos! could not have made better choices to get the crowd riled into a joyful frenzy. First came the poppy “By Your Hand”, followed by the witty, aggressive “Romance is Boring”, and “Death to Los Campesinos!” finishing off the trilogy. While a select group of extremely fanatic fans basically moshed and pogo-ed to every song, the whole venue rocked out to new songs (“Songs About Your Girlfriend”) and older favorites alike (“You! Me! Dancing!”). Hello Sadness material fit in with ease.  The gently atmospheric “The Sea Is a Good Place to Think of the Future” was wonderfully followed by the slow-building “Hello Sadness” and the weighty “Baby I Got the Death Rattle” to end the main set.

The band members, while tired, were visibly enjoying themselves, chatting with the audience and warning them that problems may arise during the show. Funnily enough, the batteries for one of their keyboards died just five songs in, leading to a hilarious search for replacements both onstage and in the crowd.  Eventually, they got all the six Double As needed and rewarded everyone for their patience with a blistering rendition of “A Heat Rash in the Shape of the Show Me State; or, Letters from Me to Charlotte”.  The addition of trumpet-player Tim also contributed to the festive mood, giving songs like “There Are Listed Buildings” the studio touches that are difficult to pull off live. 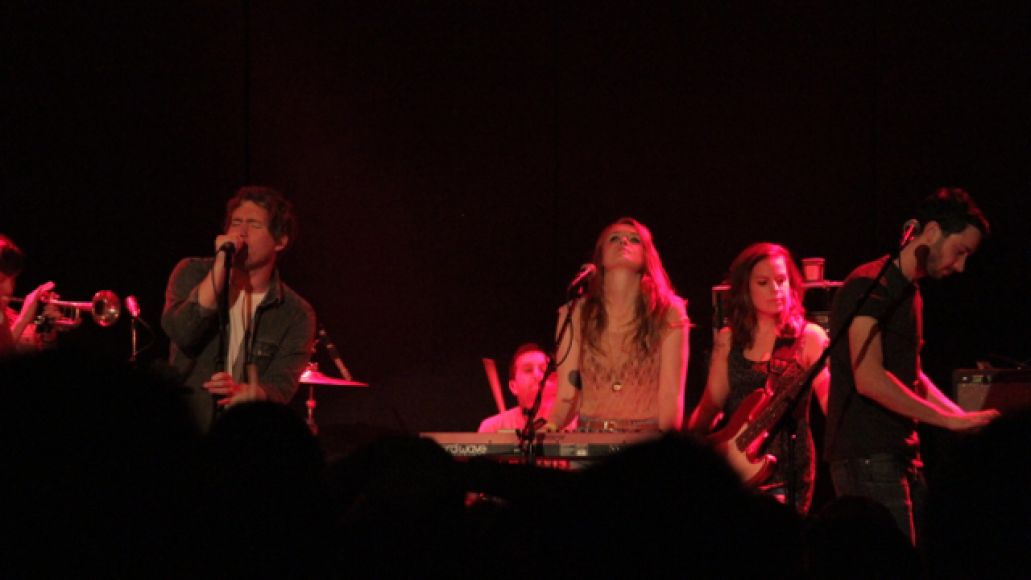 Even though it felt like four in the morning to Gareth and the rest of the band, Los Campesinos! didn’t lose a step in their first U.S. concert behind Hello Sadness. The energy of the crowd, the appearance of their good friend Tim, and the thrill of the new material all picked up their spirits and gave them the energy to burst through every song. As Gareth walked through the audience, surrounded by jumping fans during “Sweet Dreams, Sweet Cheeks”, it appeared doubtful that he’d sleep anytime soon.

Setlist:
By Your Hand
Romance Is Boring
Death To Los Campesinos!
Life Is A Long Time
A Heat Rash in the Shape of the Show Me State; or, Letters from Me to Charlotte
Songs About Your Girlfriend
We Are Beautiful, We Are Doomed
Straight In at 101
To Tundra
Miserabilia
The Black Bird, The Dark Slope
You! Me! Dancing!
The Sea Is A Good Place To Think Of The Future
Hello Sadness
Baby I Got The Death Rattle
Encore:
There Are Listed Buildings
Sweet Dreams, Sweet Cheeks
——