YACHT is excited. Really, really excited. And they want to tell you something. It’s called The Secret Teachings of the Mystery Lights.

Every song, every emotion, every beat, and every concert by YACHT is devoted to the band’s mission and to the message they want to spread around the world. Catapulted by their absurdism and their altruism alike, Claire Evans and Jona Bechtolt intertwine politically evocative lyrics with spacey electro beats and understated New Wave minimalism. Like The B-52’s? Meet the modern incarnation.

YACHT’s show at San Francisco’s The Independent was as expected from the band — lively, impulsive, personalized, and intriguing. San Francisco is a befitting place for the sort of spontaneity and lunacy that only Evans and Bechtolt can bring. Every feature of their performance is carefully realized and indicative of the concepts that the band wants to propose; for example, all members of the band wear black, except for Evans, who wears white. Before their performance of “The Afterlife”, Bechtolt unveiled a prepared PowerPoint presentation titled “This is the World”, where the venue and its grounds were declared a T.A.Z., or a “Temporary Autonomous Zone”. As Evans stated, “You don’t have to do anything because it’s already happening.” The show was about the present, the parody of fate, of the fact that the passages of time, space, emotion, happiness, love, and music are not predestined but simply happen.

And there is a beauty to this, a beauty that is articulated in every gyration, lurch, stumble, and scream made by Evans. Their music has evolved since Bechtolt’s solo project in 2004, Super Warren MMIV, to this year’s Shangri-La, possibly one of the more original and influential compositions of the year. YACHT’s music is good, and it only gets better, but experiencing a live concert by the band is literally seeing its creators depict and revolutionize their music like it’s never been done in the past and will never occur again in the future. Every experience is unique, a particle of time — and that’s exactly how YACHT wants it. 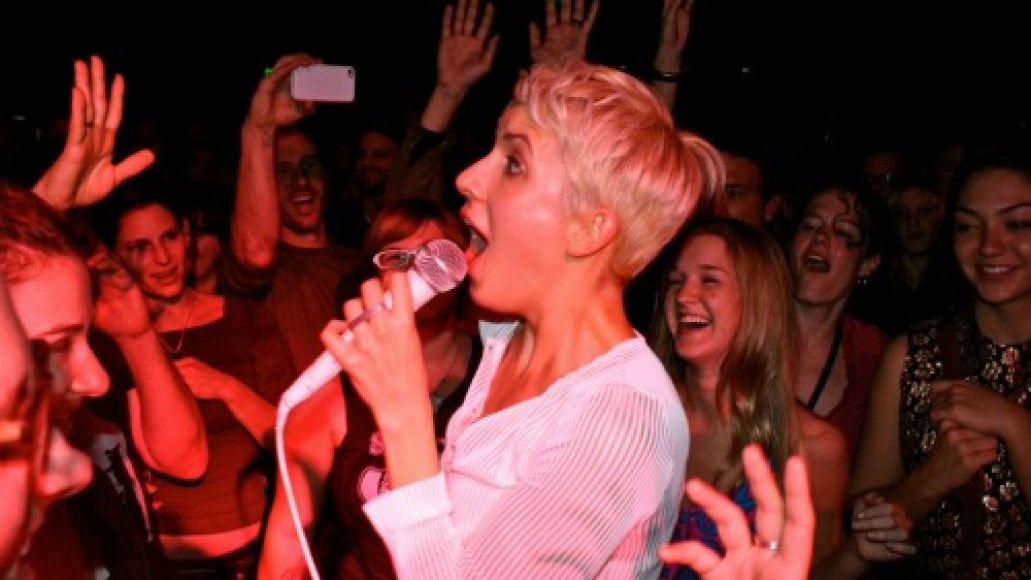 Their performance of “Dystopia (The World is on Fire)” can only be described as a willing descent into darkness, madness. With animosity and temptation in her eyes, Evans declared of the world: “Let the motherfucker burn.” These ideas that YACHT explores, like dystopia and utopia, darkness and light, evil and good, are not only attempts at dichotomy, but artful articulations and impressions of the world as it exists. Are we not suspended in a dystopia, and are we not deserving of our own demise? The thought is provocative but also representative of a generation that is tired of being reverent and apathetic. The semi-religious inclinations of YACHT are not attempts at indoctrination or subliminal marketing; they’re premonitions of a world which we can hopefully change before it is too late. This is represented through YACHT’s triangle, or “smiangle” as they have deemed it, as an aphorism of self-realization, positivity, and unity.

If at the end of YACHT’s performance you feel energized, inspired, and ecstatic, then the band feels that they have accomplished their primary duty. But if you leave understanding something more, perhaps that we are all connected and conducive of one another, then through your life you begin to live and learn the philosophy of Evans and Bechtolt.