For anyone familiar with Wu-Tang Clan and their shenanigans both on and off stage, Ol’ Dirty Bastard is no shock. The man was eccentric to the brink of insanity, enigmatic to the point of being frightening, and a cold-blooded killer when behind the mic. Every group’s got a loose cannon, and for Wu Tang, it was ODB. Despite his untimely passing, his legend lives on with a vengeance, which brings us to the issue at hand: the re-release of ODB’s acclaimed first solo album, Return to the 36 Chambers The Dirty Version.

Still riding on the energy from the Wu-Tang collective’s debut and magnum opus, Enter The 36 Chambers, ODB went about releasing a record that had the same grit, only this time told from the perspective of everyone’s favorite mad genius. The Dirty Version was the second solo Wu-Tang release, behind Method Man’s Tical, and as such was judged under a scope of individuality. Critics and fans alike knew how the Wu-Tang brethren sounded together; now it was time to see what each individual had to offer. Method Man, being arguably the most consistent rapper of the bunch, saw much fame after after shredding verse after verse on 36 Chambers. He further proved himself worthy with his onstage charisma and enthusiasm. So, it came as little surprise when Method Man’s record was a hit – he was bound for greatness.

Ol’ Dirty Bastard (born Russell Tyrone Jones) was inordinately less stable. His erratic behavior often held him back in terms of musicianship. His unsteady mind and illicit drug use undermined his sheer talent at every corner. It didn’t matter that his unpredictable swagger produced some of Wu-Tang’s most shining moments. There was never any certainty as to which ODB would show up to the stage or the studio, which proved detrimental to his credibility. So in the eyes of the media, his release would be far more fascinating. At that point in history, he could either re-invent the rap game or create one of the most hideous records of all time – it was anybody’s guess. Fortunately, the public received something much closer to the former upon the release of The Dirty Version.

Much like ODB himself, the album is an enigma. Dirty is fraught with untidy production, meaningless banter, and an inconsistent pace, but in the end those are the very components that make the album so paradoxically great. That selfsame untidy production and seemingly useless jib-jabbing on every track gives the listener an unadulterated look into the mind of one of rap’s most bizarre characters. The arbitrary pace of the album kept everyone guessing. Whether it was a driveling impression of Nat King Cole singing about gonorrhea to one of the most unforgettable hooks of all time on “Shimmy Shimmy Ya”, you never really knew where the Ol’ Dirty Bastard was headed next. While re-mastered in full and backed by a bonus disc of instrumentals, remixes, and vocal tracks, the purity of the album is far from lost. ODB’s unholy singsong viciously rattles from the grave with an ironclad mission to grab the attention of your ears. The potency is the same today as when it was originally released in 1995.

So, we know what it has to offer musically. But, why would anyone buy the Wallet Box edition? Well, the goodies, of course. As mentioned, there are two discs: the original Dirty Version on one and the other a mishmash of heavy instrumentals and obscure remixes. The two discs are contained in an over-sized yellow and white printed leather wallet with a slot for each disc where paper money would go in an actual wallet. In lieu of a coin pouch, there is a sleeve home to a black and white sticker of ODB. Stuck to the front of the wallet is a removable novelty foodstamp, the same which appeared on the cover of The Dirty Version. Deeper inside the box are a vague poster with ODB’s face on it and the piÃ¨ce de résistance, an 18-page booklet filled with all sorts of behind the scenes photos and information. The booklet includes a timeline of the late MC’s life, highlighting mainly his absurd shenanigans, a list of his many accolades, an extensive list of his pseudonyms, and exclusive photos, along with all the other things you’d find in a typical CD booklet. 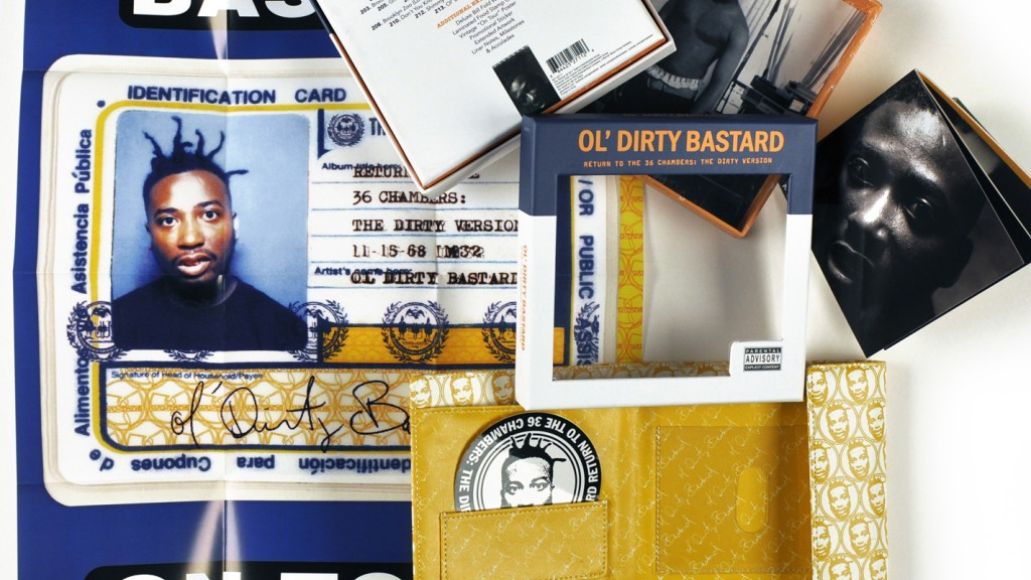 All in all, the box is a little bit wacky and over the top, but again, that’s what makes it great. When, in any possible reality, would you ever need a wallet that’s 1.5 times bigger than any back pocket on any pair of pants on earth? Never. But “wacky” and “over the top” are also two words that might best describe the Ol’ Dirty Bastard. The box is a fitting tribute to the legend for fans both hardcore and casual.

The wallet box set is currently available via undergroundhiphop.com.

What's in the Box!?: Ol' Dirty Bastard - Return to the 36 Chambers: The Dirty Version Wallet Box