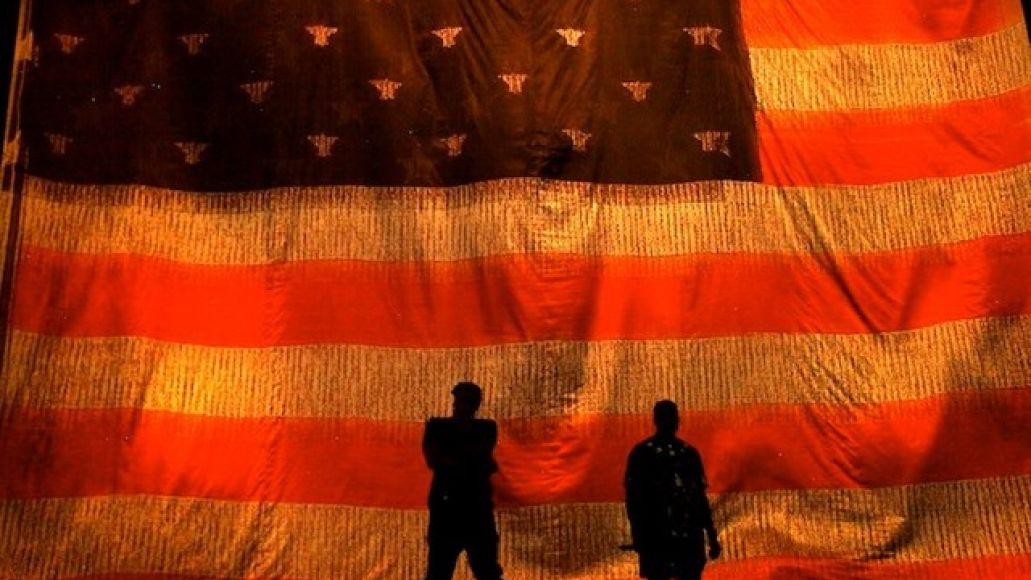 It’s so obvious, the regal imagery with these two. If you recall any scene that depicts the hoi polloi waiting for kings/emperors/hobbits to arrive, it’s all milling about and hub-bubbing in anticipation until the moment the litter arrives carrying the throne and the crowd explodes. Sure, Jay-Z and Kanye West arrived almost a whole two hours past their designated start time of 7:30 p.m. at Chicago’s United Center, but that’s to be expected — Kings wait for no man, not the other way around (though my eyes couldn’t have been the only ones that narrowed when Kanye later rapped, “Show started two hours ago/Oh, am I late?”)

I’m putting the setlist here because this really is the big takeaway from the H•A•Mmy spectacle of Jay-Z and Kanye West live on stage. Just look that pretty thing up and down one more time — what more could you want from these two moguls of hip-hop? It felt like some MTV-sponsored retrospective honoring the two, only they were the ones bestowing the laurels on themselves. I scoffed and harumphed at the self-aggrandizing Watch The Throne album when it came out, but watching The Throne live made me abdicate my own thrown to the real kings.

Again with the easy imperial imagery, but if Jay is Richard the Lionheart, then Ye is the younger brother King John. At 41 and a soon-to-be-papa, Jay floats above his words and reclines a bit more, but can still shift gears and punch it at the drop of a hat. He made his old double-time flow on “Big Pimpin'” sound just as tight, and yet with a simple “Yeah!” underneath a tracked Alicia Keys in “Empire State Of Mind”, he commanded the whole crowd and had everyone eating out of his hand as he simply affirmed “Yes!”,  ”Uh huh!” ,”Chyea!”over and over. That moment was the standout testament to his aura and presence.

Ye is the eager one, who commits fully to each and every action on stage. It’s magnetic to watch him do his trademark body-pumps and literally sprint from one side of the stage to the other. When Jay first left the stage for a Kanye solo section (one of several breaks for each of the artists in the two-and-a-half hour show) Ye hit us with some older material including “All Falls Down” which was performed in almost all shadowy lasery light, and “Jesus Walks”, which was performed almost entirely on his knees. Ye’s flare for the dramatic made the needle bounce a lot more than Jay does, but it kinda went off the charts in the extended, nine-minute “Runaway” outro that sucked a lot of the energy out of the room. He also pours it on a bit too much when Jay’s not on stage, like the mugging scowl he held just as “Stronger” was starting.

The real breathtaking moments happened when the two were interacting together onstage, circling around one another to hype each other up. Their interplay was so sincere and full of history that, as much as I really enjoyed hearing Jay’s and Ye’s singles, I couldn’t wait for the two to get together to do more tracks off WTT. I was surprised that one of the highlights of the show was when the co-ruler’s sat down on the stage, looked the people in the eye, and delivered the lines of “New Day” like true kings — selfless, sacrificial, and honest. Hell, Jay even dedicated it to all the fathers out there.

These earnest moments excused any sort of hyperbolic championing the two did, which was surprisingly little. Both were very crowd-focused, eager to please and get everybody’s hands up or get everybody going with a choice “Chi-towwwwn!”. The homecoming show for Kanye felt special, especially when he’d break his take-me-seriously face and bust into a goofy grin, or seeing Jay wearing a Bulls snapback instead of his obligatory Yankees one. Even the scripted stuff was fun, including the Ultimate Joke That Writes Itself nudged between “Gold Digger” and “99 Problems”.

They closed by playing “Niggas In Paris” eight times, which apparently was a “new record” (yah, tell me about it). Whatever — who cares, because that was fun as hell. Jay said he wanted to “turn this place into a club” and had everybody in the lower-level seats come on to the floor and fill in the spaces on either side of the stage. I would have wagged my finger at them and went back to my high horse with the two if they didn’t play like every other song everyone wanted to hear. It was unreal to hear these seminal songs, songs that helped define a genre, songs that are some of the best songs ever written, played back to back. “Empire State Of Mind” went right into “Runaway” — that’s unbelievable. Would you really want this dream night to end after a paltry six performances of “Niggas In Paris”?