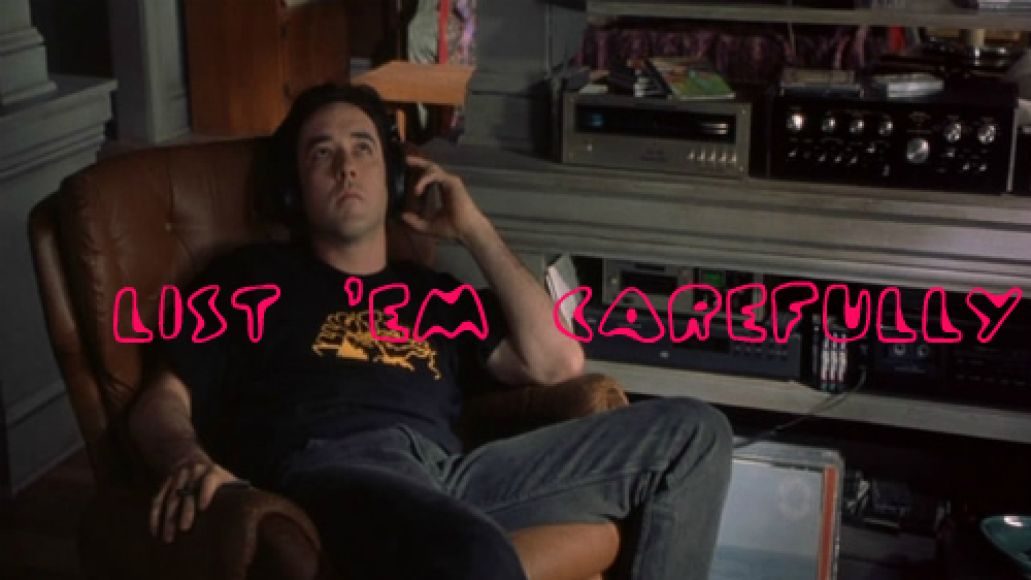 Christmas being Christmas, you can be forgiven for making the odd list (and perhaps even checking it twice). Cards, presents, food, drink, films on TV, memorable events to include in that annual Christmas letter you are so proud of, relatives to avoid – you name it. So, if you have a list to compile this year, why not turn on the radio for some quality seasonal sounds? You may wind up quickly switching stations because you really don’t want to hear “Santa Claus Is Coming To Town” for the third time today, even if he is dressed like The Boss. You’ve also had quite enough of Justin Bieber murdering “All I Want For Christmas Is You”, so you might hit that dial again. What a treat – the next station is playing Michael Buble’s “Christmas” in full. You love it, but there’s only so much you can take of that descending bass line from Slade’s “Merry Christmas Everybody”.

Still dreaming of a White Christmas? It’s enough to make you want to migrate from this winter wonderland and let Rudolph the Red Nosed Reindeer take you on a sleigh ride to oblivion. If it’s beginning to look a lot like Christmas, there’s no need to remember who sang it (Johnny Mathis… there). Instead, feast your eyes and ears on this collection of 10 Christmas curios that live up to the label of alternative in at least one respect. Chances are you won’t have heard all these tunes before, and checking them out could greatly enrich your life (or at least your holiday). Well, maybe not all of them, though I’m not saying which ones won’t set your pudding alight.

When you watch this recent live version of John Prine’s song, don’t be put off by the initial redneck laughter or (like the audience) expect a punch line every other rhyme. The singer-songwriter, revered by both Bob Dylan and the late Johnny Cash, is here contemplating Christmas behind bars, separated from his true love, so he ain’t got a lot to joke about. A mixture of tender and quaintly weird sentiments are expressed in the song: “Her heart is as big as this whole goddamn jail / And she’s sweeter than saccharine at a drug store sale.” Like the turkey and pistols carved out of wood that represent prison food, this is hardly standard Christmas fare.

This one should be in the mainstream pile, but for some reason it isn’t. All the credentials are there: breezy tune, sing-along chorus, the right buzzwords, sentimental whimsy, and more. The song dates back to 1988, when it charted (just) at No. 53 in the UK singles chart. It did better in Norway the following year, reaching No 2. Twenty years after the Norwegian highpoint, the video to the song you see here was released in aid of the UK homeless charity, Shelter. It is notable for the number of apparently random British “celebrities” it features (who are mostly unrecognizable). How this disparate cast came together one can only speculate. There is an imminent danger of Chris Rea’s song leaving the departure lounge for the singles charts, as a cover is about to be released by UK reality TV star and 2009 X Factor finalist Stacey Solomon. Help!


At the risk of offending the transgendered community, no list of alternative Christmas songs would be complete without The Vandals’ 1996 celebration of post-op neurosis. Any lyricist who tries to rhyme “breasts” with “best to me” deserves to be heard, and vocalist Dave Quackenbush finds true voice with the immortal lines, “I won’t have to tuck it behind me / Since I got my brand new vagina / It’s my first Christmas as a woman.” If you like the sound of this and can get your mind around the exhortation to “chop it off,” you may be pleased to know that the Southern California punks recorded an entire Christmas themed album, Oi To The World, although only one of the remaining 11 tracks has the word “penis” in its title. Less surprising is that the whole album will take up less than a half-hour of your time.

“Stop The Cavalry” actually charted at No. 3 in December 1980 in the UK, but it qualifies as alternative as, according to its songwriter and performer Jona Lewie, it was not specifically intended to be a Christmas song, but rather an anti-war statement. We hear Lewie’s universal soldier “wish I was at home for Christmas,” but that’s as far as it goes unless you count the bells, chiming keyboards, and brass band accompaniment. Those are all quite Christmassy, although the WWI trench imagery in the video doesn’t quite get you longing to roast chestnuts. Mainstream Christmas songs are dominated by conventional acts, so the unassuming, blues-grounded Lewie qualifies as being a step or two outside. It’s also a great tune.

Described as “a festering turd of a record” by aging rocker Billy Mack, played by Bill Nighy in the Christmas movie Love Actually, “Christmas Is All Around Me” is the actor’s seasonal take on The Troggs’ UK classic, “Love Is All Around”. The steaming metaphor applied to the song by Mack isn’t that far off the mark. “Christmas” is hardly a shoe-in for “love,” syllable-wise, and the song only makes the list for Nighy’s stellar performance on film, some amusing set pieces, and of course, his Robert Palmer-modeled backing band. It’s also a good opportunity to remind ourselves that we can all do with a little love and a few tears in our lives. So, feel good once a year, get out the Kleenex and watch Love Actually before Christmas.


“Christmas In Valence” is one of the first songs written by Morton Valence frontman Robert Hacker Jessett, some 20 years back. It was originally lent to Rob Spragg (aka Larry Love) of South London band Alabama 3, who may be more familiar to US readers as A3, and whose song “Woke Up This Morning” accompanies the opening credits of The Sopranos. Spragg changed the lyrics, called it “The Old Purple Tin”, and stuck it on their first album. Jessett decided to revive the original song in time for Christmas, and has just put together this very rough and ready lo-fi recording in his little home studio with fellow Valence vocalist Anne Gilpin. The result is an antidote to those glossy, uplifting Christmas songs, offering a lonesome, plaintive take on the Christmas experience.


4.  Fountains of Wayne – “I Want An Alien for Christmas”


There is something in the chorus to this one that makes you think this might be a raw cut from Barenaked Ladies. Instead, it’s by the gloriously named NYC power popsters Fountains of Wayne. Sadly, there doesn’t seem to be an original video anywhere, but plenty of fan versions are out there, including this amusing effort, especially as the guy playing the alien is the tallest in shot. Silly lyrics abound on the record, particularly ones like, ”He can live in the bathtub, so don’t worry about a thing/And I’ll take him out for walks, when it gets nicer in the spring.” Even better may be, “I want a little green guy about three feet high/With 17 eyes, who knows how to fly.” Well, don’t we all? Santa?

Released just two weeks ago, “Snow” is the newest item on this list, and a little pearl in a sea of fake jewels. It’s the perfect blend of contentment and regret, encapsulated in the pure symmetry of the couplet, “Our love is like snow/It covers all we know.” Kate Walsh connects with simple, heartfelt sentiments, delivered with quiet conviction. There are no bells, no marching band, no angelic choir, just a beautiful melody sung with delicate precision and accompanied by deft piano. The ever-modest and independent-minded Walsh would no doubt blush at the thought of a Rage-inspired social media campaign to install her song as the UK Christmas No. 1. Wouldn’t that be great?


“Fairytale Of New York” dates from 1987, when it became Christmas No. 1 in Ireland, and was only kept off top spot in the UK bizarrely by a non-seasonal song, the Pet Shop Boys’ cover of “Always On My Mind”. In recent years, it has been a regular visitor to the UK Top 40 come Christmas. Despite commercial success, this glorious, rousing duet by Shane MacGowan and Kirsty MacColl to The Pogues’ infectious folk backing remains firmly alternative. Its choice of decidedly unfestive vernacular (“You scumbag, you maggot/You cheap lousy faggot / Happy Christmas your arse/I pray God it’s our last”) as the protagonists sink from seeming “handsome” and “pretty” to trading verbal punches is darkly humorous and richly observed.

This just beats out “Fairytale” as the greatest alternative Christmas song of them all. The 1981 vintage “Christmas Wrapping” is a wonderfully bittersweet song that still delivers a happy ending to befit the season of goodwill. The late Patty Donahue, who fronted The Waitresses with such panache, delivers it as a deadpan semi-rap. Chris Butler’s lyrics shouldn’t fit, but somehow manage to do so. It wasn’t the hit that it should have been, but it has stood the test of time, and surely now qualifies as a bona fide classic Christmas pop song. Sadly, there is no original video, but this one at least provides you with the lyrical ammunition for a proper sing-along. And if you really want to hear whatever happened to The Waitresses, try this.