Since its inception in 2002, Art Basel Miami Beach has turned the neon-lit, tropical metropolis into one of the most booming arts scenes in the US. Every December, the international art world makes Miami its home, with every medium and every genre somehow represented. It’s only natural that musicians with a multimedia background would also be drawn to the fair. Each iteration has seen both incredible and unlikely music performances go down. Case in point for unlikely: an acoustic Moby show at Bardot nightclub.

The invite-only kickoff event was billed as “Moby Destroyed: Digital Exhibition & Acoustic Performance.” Moby’s latest album, Destroyed, was released alongside a 128-page hardcover photo book featuring shots taken by Moby himself while on the same tour that he composed the album. A gallery show of these images has been touring the country this past year. Bardot, however, wasn’t the site of this gallery. The “digital exhibition” was a slide show spliced with music videos from the album, which played unceremoniously for about 15 minutes before Moby and co. assembled to perform.

Bardot is a very small, unmarked club off of North Miami Avenue. The general decor is like a wealthy bachelor’s living room: low lights, intimate nooks, and deep couches. There’s a decent sound system, too, but no stage. Instead, performers play “The Carpet,” a Persian rug on the floor in the middle of Bardot. Moby’s vocals and acoustic guitar were joined by violinist Claudia Chopek and vocalist Inyang Bassey. Right from the start, the electronic musician accepted that the odds were against him: “It’s 11pm on a Friday night in a disco in Miami, so I thought I’d do an acoustic set and play some depressing songs.” Patrons were asked to keep quiet, and though they hushed down after the opening performance of “Why Does My Heart Feel So Bad”, it was clear that the mood wasn’t what Moby had hoped for. 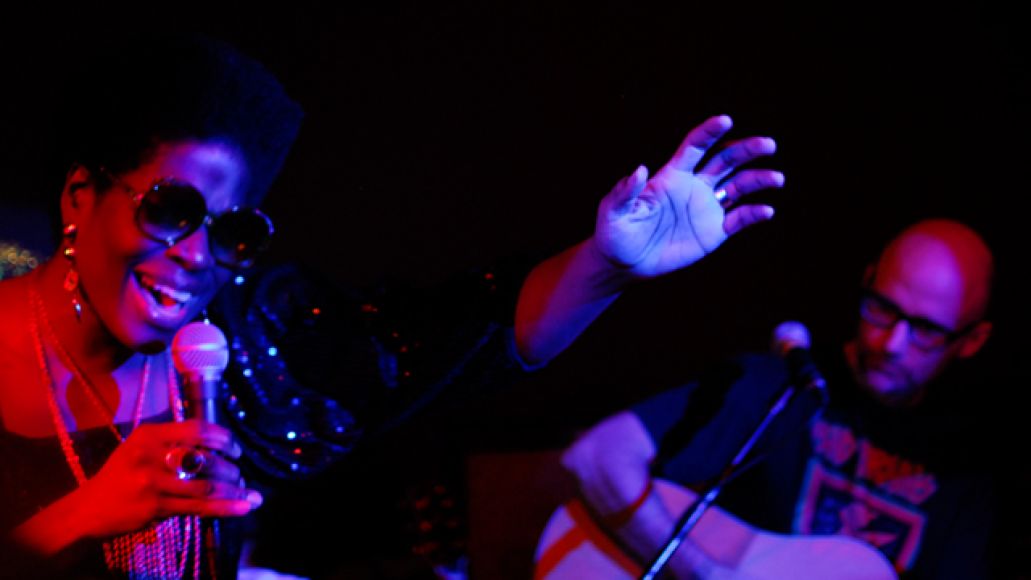 In an effort to better suit their audience, Moby and co. adopted a more lively set list and, for the most part, transformed their performance into a covers concert. They played Cash’s “Ring of Fire” with the audience called upon to simulate the trumpet solo, Zeppelin’s “Whole Lotta Love” with a conscientious nod to the style of original songwriter Willie Dixon, and a cover of Reed’s “Walk on the Wild Side”. The performance of “Wild Side” was especially noteworthy for Moby’s context; it’s his favorite song about New York, where he was born and raised, and it’s specifically about the New York he grew up in, not the Disney-fied present-day city. (He made a point of singing, “New York City was the place where…”). Also, according to Moby, he once made out with Holly Woodlawn, the 60-something-year-old transgendered woman from the song, while drunk at 3 a.m. in a Los Angeles bar. Though straight, he confessed that he couldn’t not make out with the Holly from “Walk on the Wild Side”.

Other tracks included “Natural Blues”, “South Side”, and a rendition of “Honey” that turned into Sabbath’s “War Dogs” then back into “Honey” again. Though Moby did a fair amount of singing and his guitar playing, as always, was solid, the real star of the show was Inyang Bassey. Since she started performing with Moby during his Wait for Me tour, she’s increasingly become the highlight of his live show. This became apparent during his recent Destroyed tour and was all the more clear at the stripped-down Bardot performance. If someone had unwittingly stumbled into the room, it would have been easy to mistake Moby as just her backing band. Bassey’s presence is lively, and her vocal work is at times soul-shattering. She dominates the spiritual vocals from Moby’s past tracks. Heck, she owned Sabbath, too. 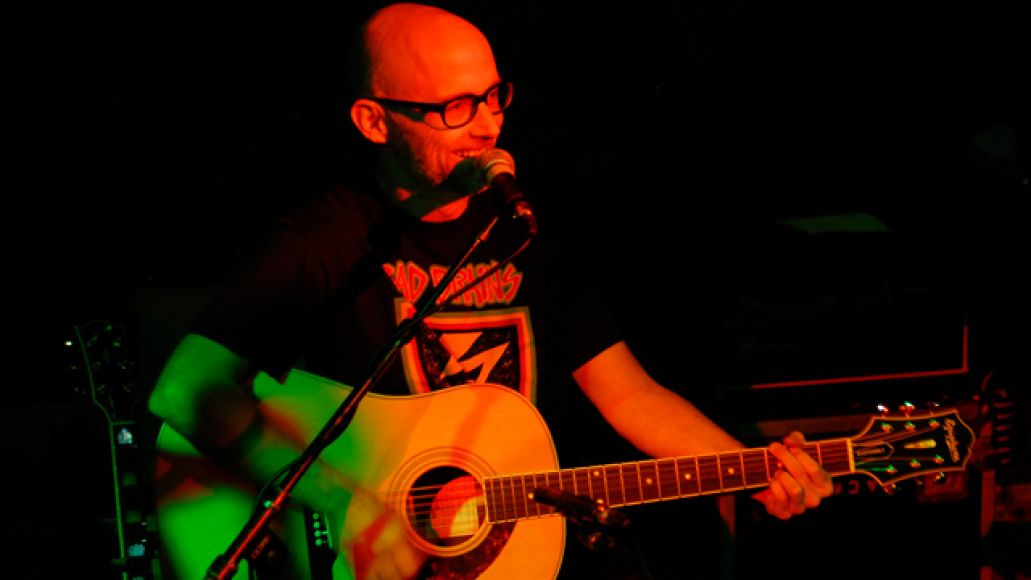 Though the set was fun — the anecdotes were great, Chopek’s violin solos were terrific, and Bassey’s vocals were amazing — the overall experience was more or less a bust. Bardot sees a lot of noteworthy acts come though and play their carpet “stage,” but it’s a lousy venue experience. With a standing crowd, only those immediately surrounding the performers can see anything. The “digital exhibition” felt like a formality or afterthought. Moby and co. played seven songs in about 45 minutes, and that was it. The short set was likely due to not having enough prepared for an energetic audience. Whatever the reason, it was too short, and that was a shame.

The following night, Moby came prepared for Miami’s club crowd with a DJ show at Mansion. You can bet that performance found the right crowd.