The Doomtree Blowout is a big fucking deal. Every December, Minneapolis hip-hop collective Doomtree takes over First Avenue’s 7th Street Entry for “one whole fucking week,” as the t-shirts and taglines say. Each member of the collective curates one night of the week, culminating in a group performance on the last weekend. The upshot of this is that the audience can pick and choose which night they want to attend based on who’s performing. Having seen Doomtree in its illustrious entirety before, I opted to see rapper P.O.S.’ Wednesday night show. For his lineup, he picked electronic hardcore band Marijuana Deathsquads (which he helped create) and the fledgling Polica, cobbled together from members of Gayngs. While it was clear that most of the audience interrupted their 9-to-5’s to see P.O.S., the opening bands gave him a serious run for his money.

Listening to Marijuana Deathsquads is like taking drugs: you have no idea what’s going on, you know it’s probably bad for you, but as soon as it’s over, you want more. The first time I saw them, I couldn’t handle the dueling drummers, waves of deafening synthesizers, and screeching, distorted vocals. This time, however, I was able to discern sophisticated rhythms beneath the walls of noise. P.O.S. and local crooner Channy Leaneagh traded warped howls and yelps over the drummers’ tribal call-and-response pounding. Two synth manipulators added thunderous bass worthy of James Blake, which only intensified the music’s industrial trance-like quality. Even though I felt like I was hearing everything underwater when it was over, I only wanted to hear Marijuana Deathsquads for the rest of the night.

Fortunately, I had been looking forward to seeing Polica since they emerged from the ashes of Leaneagh’s longstanding folk band, Roma di Luna. Even though they have yet to put out an album, Polica has opened for Clap Your Hands Say Yeah and Foster the People, and received rave reviews from their performances at CMJ. Casselle’s rich, Autotuned tenor gains momentum from dueling drummers not unlike Marijuana Deathsquads—in fact, they are one and the same—but like Gayngs it creeps by at R&B beats per minute. A complex bass line, minimal synthesizers, and some trumpets add just enough extra texture. Casselle and her backing band played mostly new songs, saving their three mastered tracks “Dark Star”, “Wandering Star”, and “Lay Your Cards Out” for last. It’s not out of line to say that they will probably be the next Gayngs. 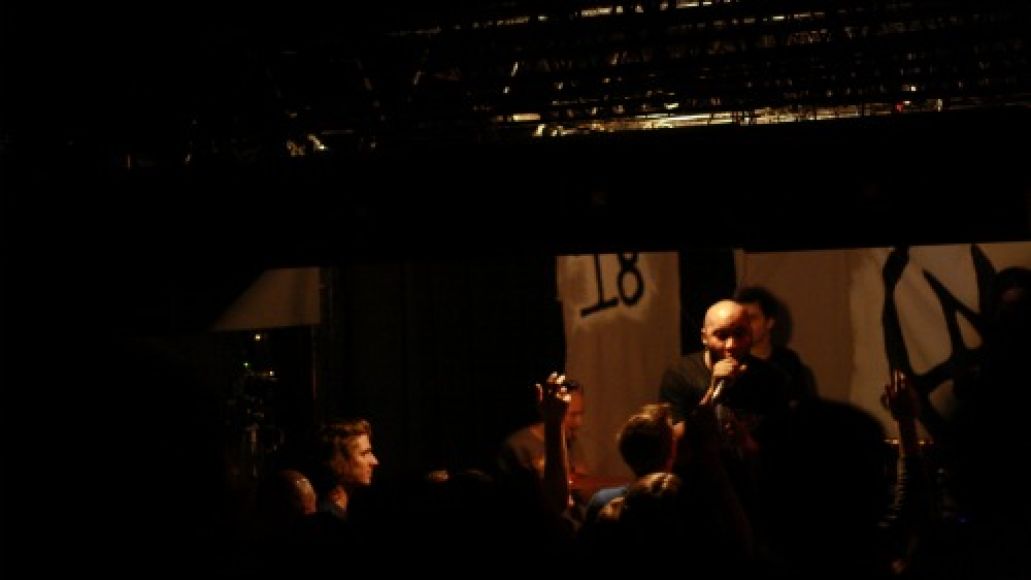 P.O.S.—also known as Stef to some vocal, devoted attendees—gave due credit to the other bands before he stormed into “Let It Rattle” off his 2009 full-length Never Better. And then, like at any good rap concert, the air thickened with pot smoke (maybe it was the Deathsquads). He invited Mike Mictlan onstage to perform another track from that album, “Goodbye”, along with their essential grinder “Earthquaker”. Honorary Doomtree member and official local Astronautalis took the stage to perform a new track with P.O.S. Riding off the rapper’s fire-and-brimstone energy, P.O.S. climbed down into the audience to make everyone dance while DJ Plain Ole Bill, who replaced Doomtree beatmaker Lazerbeak, played some German house music. After that, the room’s energy skyrocketed. Sims came onstage for an incendiary rendition of “Too Much”, featuring P.O.S., off this year’s release Bad Time Zoo. Before he called it a night, Stef dispensed some words of wisdom: “Don’t listen to people tell you you’re a hater. Fuck that! Hate shit!” and my personal favorite, “You guys are the best friends I could have.”