“The Mississippi River and Missouri River are big parts of St. Louis commerce. There’s casinos on them, and you can get drunk by them. Back when I lived in Missouri, I used to go to hang out at the riverfront. There was just a small town outside, and going there was a fun thing.”

This is what Cameron Matthews channels every time he writes a song. At one point, this “delta influence” was inspiring Matthews to play solo country songs, but now he’s taking a new route. Upon moving to New York City, that concrete jungle where dreams are made of (Astoria, to be exact), he began channeling the river into Bear Ceuse.

That’s not a spelling error, but rather a play on the French word berceuse, which roughly translates to “lullaby.” “A lot of classical composers would write berceuses,” Matthews explains. “Chopin had one. My girlfriend plays cello, and I saw it written on her sheet music. It just struck me as very evocative.”

With a name that deconstructs a deep reference to classical music and a palette of  Midwestern imagery to paint from, Matthews and the other guys, all of whom are from Middle America, work together to make tunes that dig into the heart of decades of rock & roll.

Matthews was certainly not joking about having a delta influence, especially on tracks like “Vodka Day Parade”, with its crooning vocals and upbeat strumming. The instrumentation could very well make it a Wilco song, and this is not at all surprising due to the band’s love of everything Jeff Tweedy. “As I got older, I wanted to blend dissonance into my music,” Matthews says. “I think Tweedy really encompasses this on albums like Yankee Hotel Foxtrot. He loves bringing noise into this coarse, driven album, and I wanted to do something like that.” Other tracks such as “Elephant” and “Go to Be Warm” certainly embrace this style of alternative country, but Bear Ceuse is not just trying to copy Wilco. 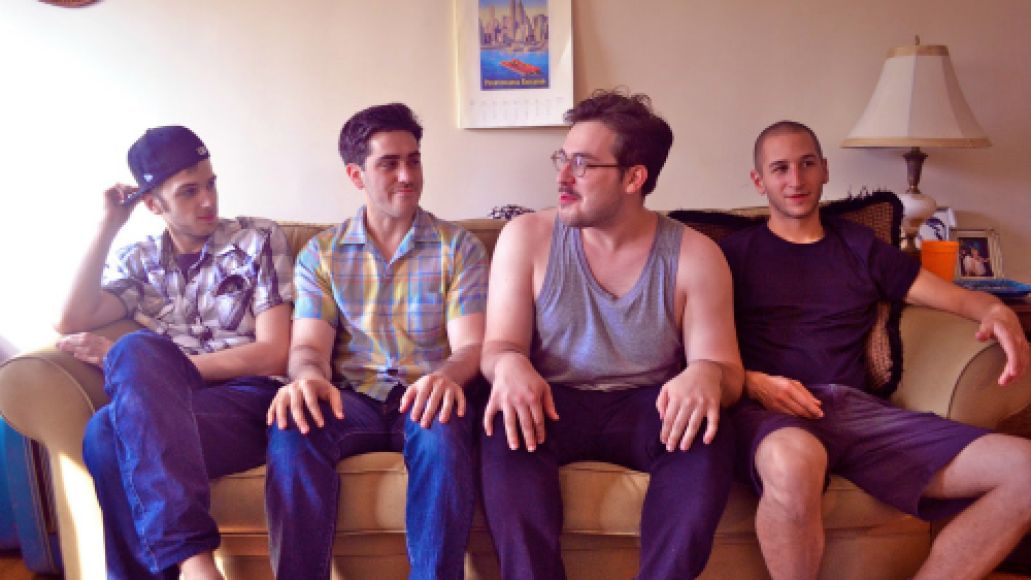 Matthews’ influences range from his Midwest roots modern-day noise-rock, to just about anything released on Merge Records. He lists bands like Pavement, Titus Andronicus, and Sonic Youth as sources of inspiration, and the other band-mates bring more colors to the table as well: “I write all the songs, but I think that the guys take arrangements to a different space. Adam Horne [guitar] has a lovely ’90s style; it’s really melodic. Jordan James [bass and a French horn student at Julliard] can be really drone-y. He loves electronic music, and while I’d never let that element in, he plays dubstep at bars, but then plays French horn at Carnegie Hall. And the guy that keeps us all together is Danny [Sher]. He changes his shirt three times when we play. We all rely on him so much.” Those elements make some of Bear Ceuse’s other tracks so interesting. Jams like “Zahmbies” sound like a combo of Warsaw-era Joy Division and Thin Lizzy. And, of course, Matthews strives to keep the subject matter both engaging and contemporary. “It’s probably more ironic now than ever, because Congress is a lame duck,” he adds. “I accuse them of being zombies that want blood.”

While the band has had some fun playing live, they have yet to branch too far from home. Understandably, they are trying not to cast too large of a net. “I’d like to get more popular in New York before we hit the road,” Matthews says. “Just getting our sea legs and playing in Brooklyn and Manhattan right now. We play at the Rock Shop in Brooklyn a lot. It’s our mainstay.”

The band might not be in a hurry to have the spotlight shining in their direction, but they are very realistic about honing their craft into something tangible. They understand the market is tough, demands are harder, and competition can crush lesser men, but that’s not the deal in Bear Ceuse. “Being a musician isn’t as lucrative as it used to be,” Matthews admits. “I don’t think I could go a month without playing live. It’s just the routine. When you are in the music business, that’s your life.”

However, since Matthews is the chief songwriter, he always writes things that are extremely personal, which can be a very dangerous move. “There’s a hyper sense of self on the records I cut,” he explains. “I think everything is about me, my friends, people I know, and I rarely have songs that are relatable to everyone.” At some point, though, we have all been young, all been focusing inward, and we have all stood at the riverbank to contemplate our futures.

Check out an exclusive download of “Yes Man” below…