“Could be a weekend with Jaar sort of thing,” my editor said. I was assigned an excuse to pass on Madonna’s halftime show and spend my Super Bowl weekend with ambient noir&B wunderkind Nicolas Jaar. The barely legal beatmaker and aesthetic tastemaker—who also studies at Brown University, spins at school parties, and runs his own record label, Clown & Sunset—performed Friday night at the Music Hall of Williamsburg and Sunday afternoon at MoMA’s PS1 in Queens. The latter also functioned as a launch party for multimedia production house Clown & Sunset Aesthetics, the parent company of Jaar’s label. Both events were mutually supportive, showcasing Jaar’s talents as a practitioner of modern-day musique concrete who can also drop it like it’s hot.

Friday’s show can be summed up in four words I heard while standing in line for coat check: “Yo, that was epic” (or alternatively, “Fuck, that was good”). I knew Jaar’s performance was going to be different from the textured blips and clicks on his album Space Is Only Noise when I felt the first bass shudder through the packed floor of MHOW. Jaar started slow, looping monastic chants into a Shure 55 vintage microphone while naturalistic images projected behind him. By the time his rhythmic contractions became noticeable, they were already increasing in frequency, reaching an almost unbearable tension before Jaar unleashed the drop. Despite his setup constraints, Jaar danced to the beat before stopping it just soon enough to leave his audience wanting more. Even though it started to feel formulaic after awhile, his timing was nothing short of masterful. 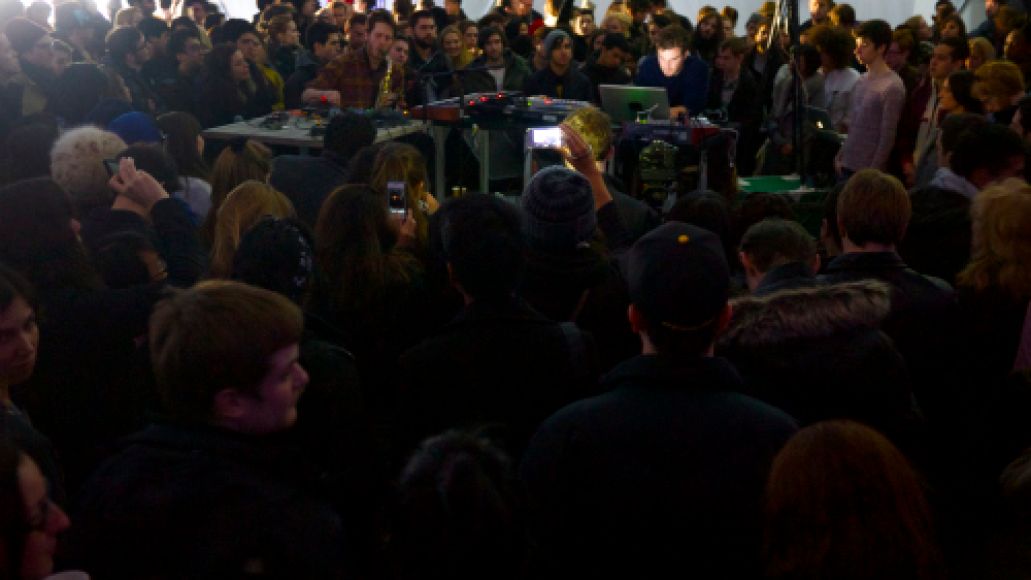 Halfway through the show, Jaar brought on saxophonist Will Epstein and guitarist Dave Harrington (who collaborates with Jaar under their Darkside moniker), whose experimental curls and licks fit well with Jaar’s classically inclined keyboard riffs. A little later, Sasha Spielberg—who, yes, is Steven Spielberg’s daughter—provided sultry vocals that eclipsed Scout LaRue’s recorded for encore “And I Say”. Since it was difficult to discern individual songs during the performance, that song and Jaar’s powerful rendition of “Space Is Only Noise” particularly stood out. By contrast, Jaar’s five-hour stint on Sunday was mostly improvised. There seemed to be some structure behind Epstein, Harrington, and Spielberg’s scheduled appearances, except when Epstein’s vintage alto saxophone quite unexpectedly broke. Fortunately, the production team was able to find a replacement before Epstein took the stage. That’s the convenience of a five-hour show.

Instead of Twinkie stadiums and hot dogs at PS1, vendors sold frog legs and chorizo. Everyone drank homemade Bloody Marys out of compostable cups and smoked cigarettes in a courtyard next to the geodesic dome, and I felt like I was in a Twilight Zone hipster recess. I recognized some people from Jaar’s show on Friday, but there were so many attendees that if you left the dome for some refreshments and schmoozing, you had to stand in line to get back in. And for good reason: with so much time, Jaar let his experimentation unfold with relish. A rotating camera, courtesy of CSA’s filmmaker-in-residence, Ryan Staake, videotaped audience members and superimposed with other images on the dome’s wall. Jaar panned sounds in addition to images, so that each tower-like speaker surrounding the stage played a different sonic layer (i.e. one played Jaar’s clicks, another the sound of waves, and another his vocal loops). 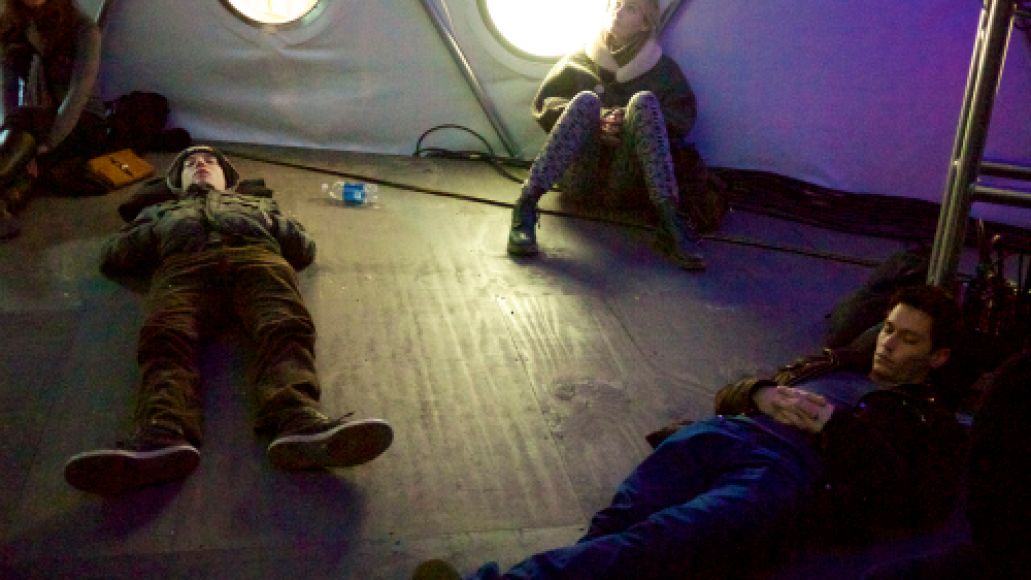 When Jaar did introduce rhythmic bass synthesizers, he extended the sequences by only a beat at a time, building them in slow motion. Perhaps he wanted to avoid agitating people lying down on the dome’s periphery, letting the sounds wash over them. They seemed to have the right idea. Standing close to the stage, it was hard to lose myself in Jaar’s soundscapes while dealing with the crush of people and incessant conversation. Observing each person as they absorbed the experience, I agreed with the concertgoer who said, “I wish I were here by myself.” I only enjoyed the admittedly impressive turnout when Spielberg sang over Jaar’s fluid dubstep bass, moving the audience as one. If I took anything away from my weekend with Jaar, it’s music as art’s power to move everyone. Even if they are all hipsters. 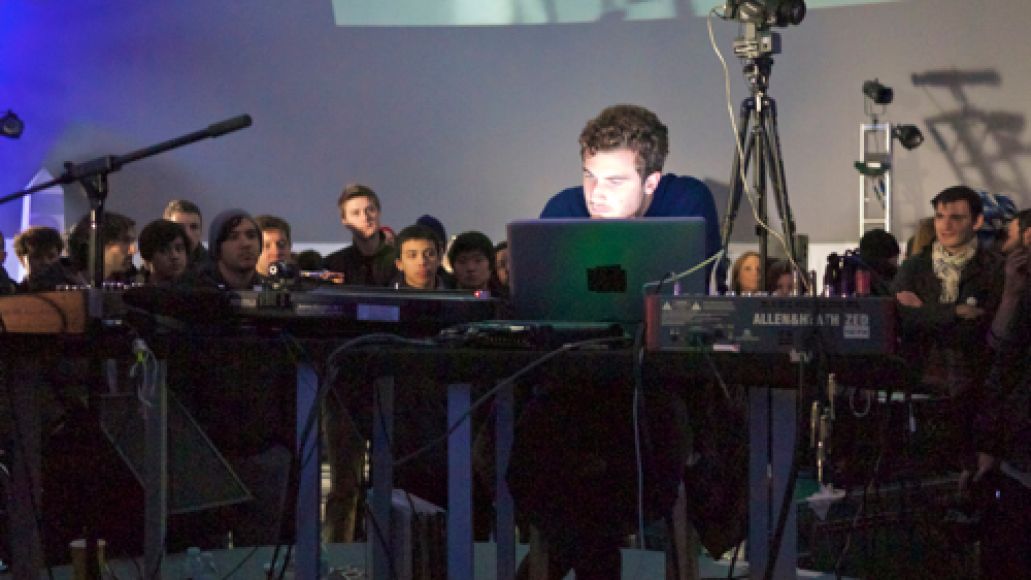 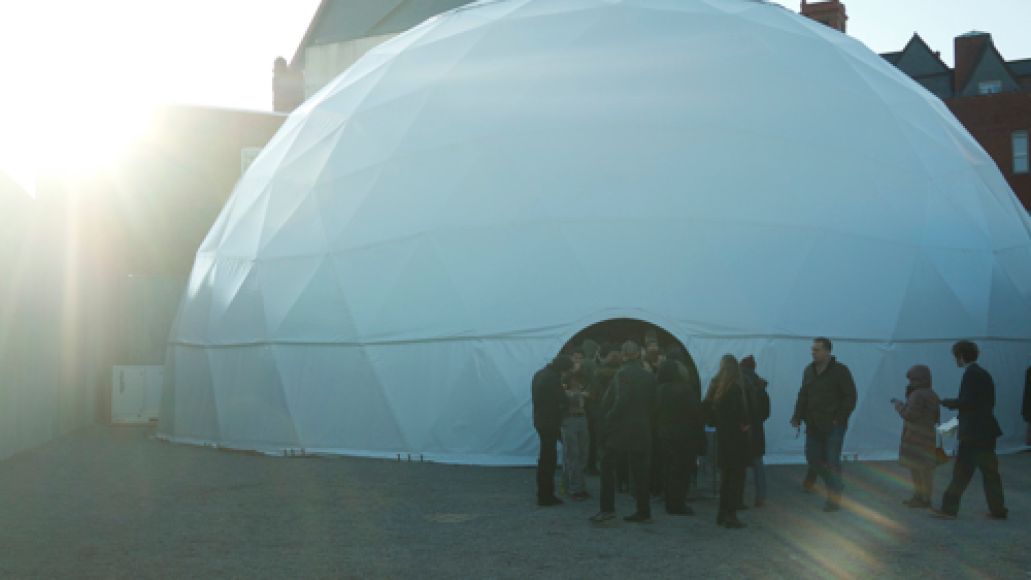 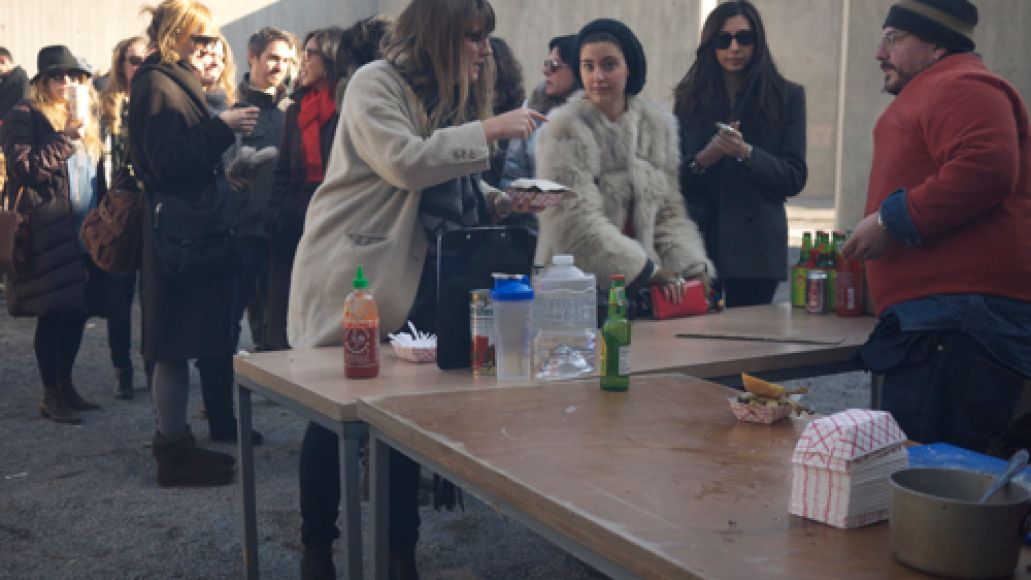 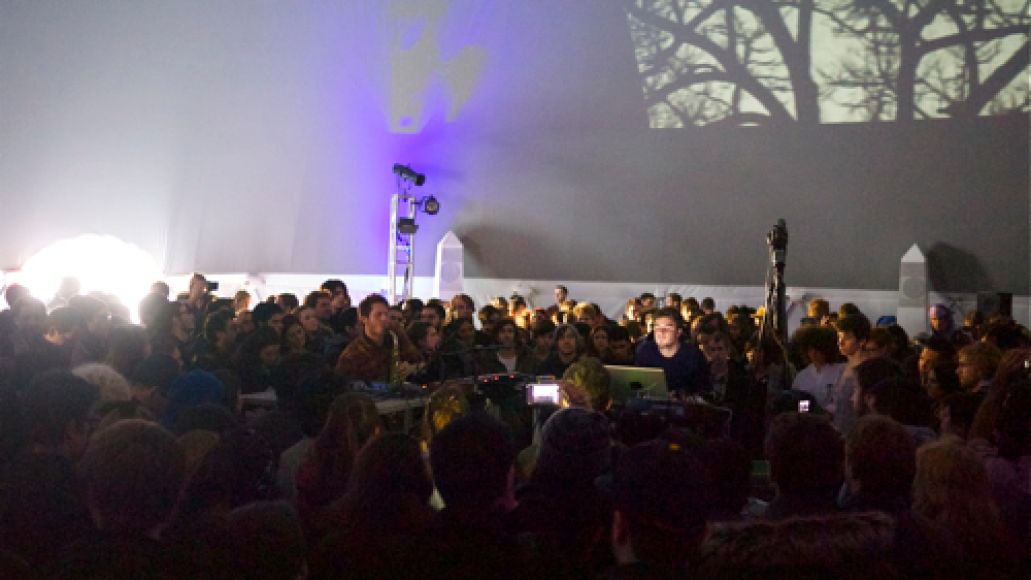