It would be fair to designate California quintet Young the Giant as a band ready for the big time. Ever since they dropped their self-titled debut, one of Consequence of Sound‘s most positively reviewed records of 2010, the band’s sound has earned more than a few comparisons to the emphatic rock grandeur of U2. Last week, YTG kicked off a two-and-half-month headlining tour that includes stops in every corner of the US, as well as a few dates in Canada. Recently, we had a chance to speak with YTG frontman Sameer Gadhia about playing on TV, the band’s post-tour plans, earning a fan in Morrissey, and more.

What are your plans for after the tour?

After the dates we currently have scheduled, we plan on hitting a bunch of festivals this summer. After that, hopefully September, we’ll hit the studio to record our next album. [Young the Giant has] been living together in California, and we’ve been working hard to get a lot of writing for the new album done now, before we get too busy with touring.

Young the Giant was recorded, at least by and large, live. How did that help the band’s live set?

It definitely made it tighter and more solid overall, just because there was so much repetition in the studio.

You’ve been quoted as saying that “My Body”, probably YTG’s most popular song, was written in about 15 minutes. What caused the song to come together that fast?

It had been a really slow day of writing, so (producer) Joe (Chicarelli) started talking to us about this songwriting approach called anti-writing, which he said had been very successful when he was working with Jack White. Anti-writing is characterized by doing something that wouldn’t normally be done by the writer. In the case of “My Body”, we decided to just come up with a really big hook–something that we hadn’t really tried before. Actually, the song was almost a sort of joke to us at fist, but then our manager was like, “This is the one,”  so we went with it.

Is the song still something of a joke to you guys?

Not at all. We’re very proud of it now. 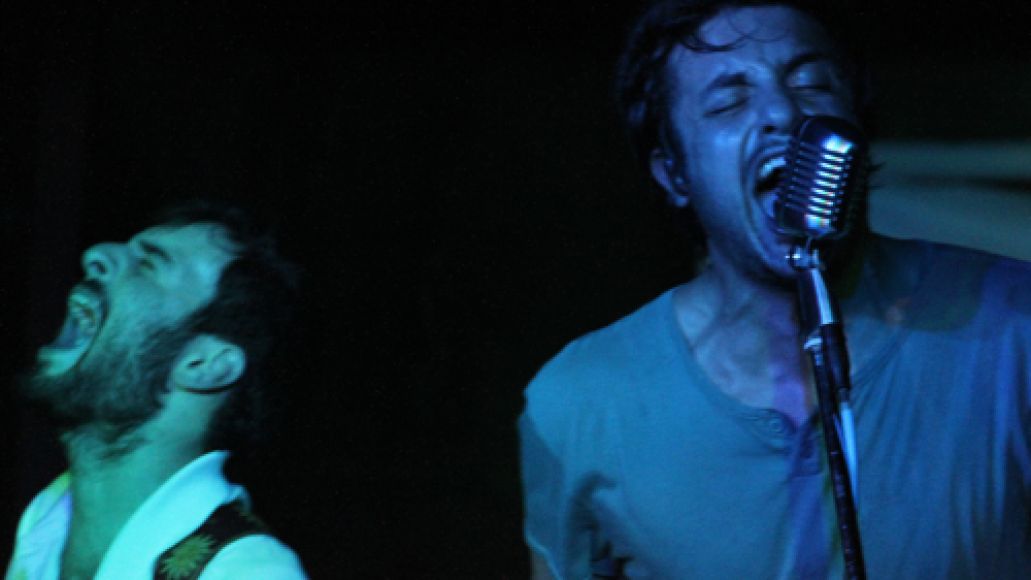 YTG has played on TV shows like The Tonight Show with Jay Leno, Later… with Jools Holland, and Jimmy Kimmel Live! What’s different about how you guys approach a TV performance versus how you approach a relatively small club gig?

We’re a little more meticulous about how we rehearse and set up before a TV performance, because we’re totally aware that even the smallest mistake will be amplified. And there’s always nerves, so we might have a few drinks beforehand to loosen up. But, fortunately, we’re getting used to playing on TV, so it’s not as big a deal as it was at first.

After YTG played Later… last May, Morrissey had some very flattering words for the band, saying, “I could break down with happiness at the new debut CD from Young the Giant. It is the whole thing… It is the perfect tone…and Sameer‘s voice is unbreakable.” How did that feel?

Whenever a musician compliments you, especially when it’s from a guy like Morrissey, it feels great. It’s nice to get positive reviews, don’t get me wrong, but when the praise is coming from someone who’s been in the same situation, in the studio and writing, it’s really satisfying and affirming.

Has Morrissey reached out to you guys?

He’s asked us two or three times if we’d like put together a tour with him, but the timing has always been an issue.

“Rolling in the Deep” (Adele cover)


YTG covered Adele’s “Rolling in the Deep” last February. What drew the band to the song?

Well, obviously, it’s an incredible song, and Adele’s voice is amazing on it. At the time, it didn’t seem like anybody else had done a serious cover of it, so we thought we’d take it and try to do something different with it.

It’s apparent within a minute or so of any YTG song that you have an extraordinarily pure voice. How did you develop your vocals?

I never took vocal lessons, but I was in choirs in high school and college. I was actually in this really cool African choir when I was in college, which was a great experience. It took me a while get the tone I wanted, but I’ve been pretty comfortable with my voice for the last two or three years.

Last year, Spin reported that you were two years away from receiving a degree in biology, but in another interview you were quoted as saying you were putting school on hold. What’s the current status on your formal education?

I haven’t been to school for a couple of years now. I intend to go back eventually, but things are going too well for the band right now for that to happen within the next year or so.

The Call Up: Sameer Gadhia (of Young the Giant)