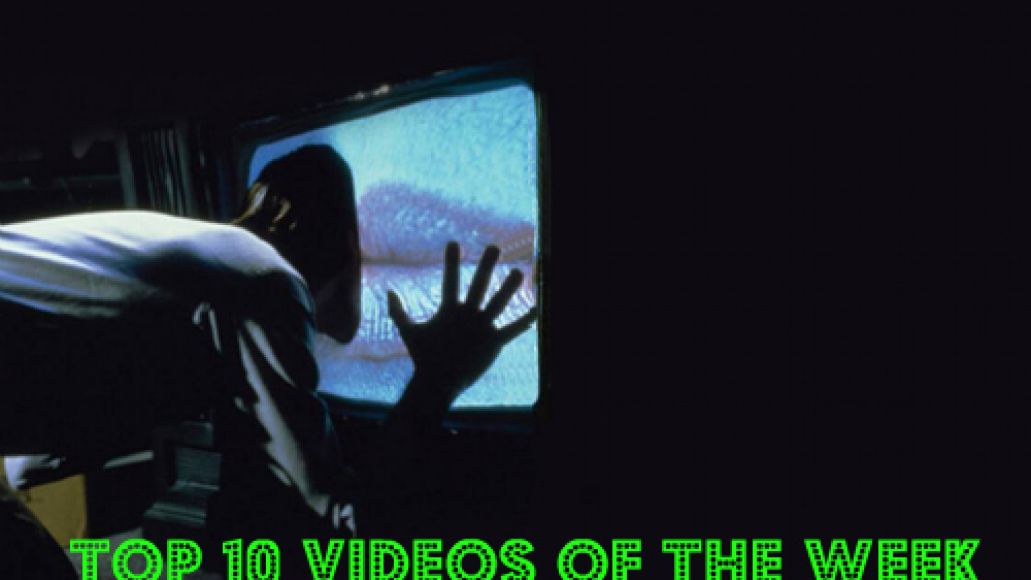 “I’m looking for something that’ll… break through. You know?” James Woods’ Max Renn yearns in David Cronenberg’s 1983 cult classic Videodrome. Oh, how things have changed. In today’s day and age, we’ve already drowned in media. It’s swallowed us. We’re nothing but a bubble amidst one infinite, engulfing abyss. Intimidated? You should be. With each passing second, you’re losing opportunities to take advantage of a culture that’s moving ahead and at an exhausting rate. You could very well be alone… left behind… abandoned. Terrified yet? Yes? Well, that’s more like it.

Bear In Heaven – “The Reflection of You”

Beware the abominable tape monster! Legend has it he’s drawn out of hiding by the sound of upbeat experimental synth-rock.

Justin Vernon’s hot streak keeps on rolling with this video for the latest single off Bon Iver. We see an old man drive through some beautifully pastoral scenery before paddling out to sea where several Wicker Man-esque wooden structures stand. Don’t worry though, there’s no Nicholas Cage cameo to ruin this brilliantly directed clip.

Bruce Springsteen – “We Take Care of Our Own”

At 62 years old and without the irreplaceable Clarence Clemons, Bruce still proves why he’s The Boss during his week-long residence on Fallon. Jimmy Fallon’s ultra giddy introduction says it all – younger bands take note.

It’s not easy getting old, as illustrated by Girls in their new video. An aging woman (who looks suspiciously like she could be the actual mother of Girls lead singer/songwriter Christopher Owens) stars in what starts off looking like a Prozac commercial, but actually turns out to be a touching reflection on nature and old age.

Ever wonder what the animated members of Damon Albarn’s Gorillaz do in their off time? This video goes to show that even when you’re computer generated, you still have to worry about mundane things like cleaning your apartment, making breakfast, and waking up on time for work.

Memoryhouse – “The Kids Were Wrong”

In an increasingly electronic world dominated by video games, YouTube clips, and cell phones, there’s something remarkably refreshing about seeing young lovers bond over a good old game of jacks.

One day I hope to be a good enough dancer that objects around me start magically turning into gold whenever I bust a move.

Radiohead – “Identikit” and “Cut A Hole” (Live in Miami)

Those “Above The Influence” anti-drug commercials apparently never had much of an effect on ScHoolboy Q, as made apparent by this extremely under the influence new video.

The painfully awkward professional portrait has become somewhat of a popular internet meme over the last few years. Summer Camp decided to capitalize on the cringe-enducing craze by devoting an entire music video to it. The result has enough of that tacky smoky background effect to to make you thank god it’s not 1992 anymore.