Since the release of their 2007 debut, Cross, Justice have brought the conceptual aesthetic back to pop music. From the introspective and provocative imagery of their videos, to their live performances and the cult of the Cross, Justice are making a statement on notions of power, truth, irony, and empire.

But band member Gaspard Augé will never tell you this. In partnership with fellow Frenchman Xavier de Rosnay, Augé only wants to appeal to human emotion, to the romanticism and imagery of everyday life. Producing music is less about the interpretations of journalists and critics, but more importantly a form of self-preservation, a means to protect the band’s innocence, youth, and therefore the freedom of their music.

And fresh from performing at this year’s Ultra Music Festival in Miami, Justice is now off to the west coast to promote their sophomore album, Audio, Video, Disco. Next stop: the Coachella Valley Music and Arts Festival, whose attendees hold high hopes for the French duo’s performance. Consequence of Sound had a chance to chat with the mystical Monsieur Augé while he was taking a breather before the next leg of touring.

So, to start off, how was Ultra? I heard you guys played an epic performance, brought a whole new swag to the stage.

Well, it was good fun, though we found the crowd a tiny bit quiet. But with the extra lighting we got from the Ultra stage, we were able to enhance a few moments.

I watched A Cross the Universe last night, and it seems like you portrayed the audience in the film to be much more enthusiastic. How has the tour for your sophomore album [Audio, Video, Disco.] been different?

We were very happy this time around, because we didn’t know what to expect from the U.S. crowd, and it’s been crazier than the first tour so far.

Also, the music for your sophomore album is considerably more rock-influenced, more experimental. How does that change the elements of your live performance? Does it change the face of your audience as well?

Onstage, it doesn’t make much of a difference. We simplified everything, but the core of the tracks are very similar to the new record versions. The crowd is quite similar, even younger in some cities.

Are you bringing in a live band, singing the vocals live? Or is it all pre-recorded?

No, it’s just the two of us. It’s not time-coded. We have all the split parts of the tracks, a few keyboards, pianos to play the leads and the solos, and we’re trying to make the best hour-and-a-half sequence with it. 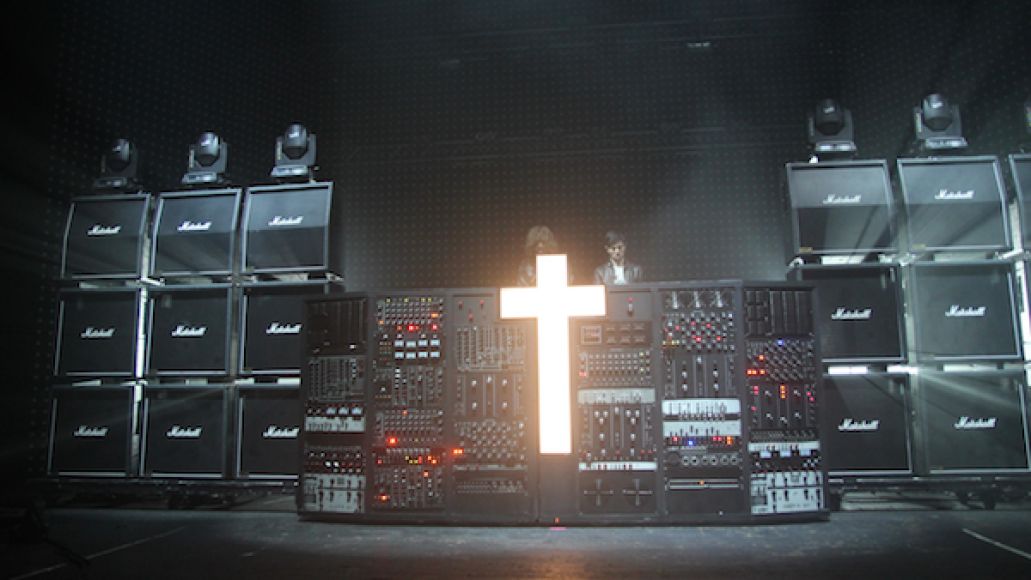 Let’s move on to your next stop, Coachella! Excited to get over to the west coast?

Definitely excited. It’s the best part of the year for us to go there.

How does it feel to be one of the most anticipated acts at Coachella? And how about that lineup?

I guess Snoop and Dre are the most anticipated acts, but if we can fit somewhere in between, that’s great.

So, bringing it back to comparing your A Cross the Universe tour and this one… how have you grown from your first album to your second album?

We’ve grown up like everybody does, but we still have the same concerns and influences. We didn’t try to renew ourselves or radically change our style; to us, it’s a natural evolution from the first album.

You guys are arguably the modern rock stars, living the “sex, drugs, & electronica” lifestyle. What are your influences, and how much do you feel like you yourself are influencing music?

We’re just trying to make epic, romantic, melancholic pop music – and we don’t feel like modern rock stars either. We try to stay as naive as possible and not know too much about “technicity” to keep the magic.

Humility is key, and your music is incredibly powerful and definitely speaks for itself. I do have another question about your imagery, though, as I believe you and Xavier used to be graphic designers, correct?

Yes, we like to think about videos and artwork.


There is no other message than simple emotions, from epicness to melancholy. And so the visual side of Justice is there to support those emotions and to propose something we find relevant. Or not propose, but give to people.

So, would you say your goal is to merely speak to our emotions – to speak to what makes us inherently human?

Lyrics-wise, we try to be universal without being too stupid, like “get your ass on the dance floor.” But we’re not Bob Dylan either — that’s a thin line. The best definition of our lyrics is something we read on the Internet; some guy said it looked like they were written by some 14-year-old in the back of the classroom.

So, you’re like teenage angst for the 21st century!

We’re not trying too hard. We just make music in a very naive and romantic way.

Well, I like the subtle romanticism. I can say for me, your music has held many special moments… traveling on a train in Amsterdam listening to “Planisphere”… road-tripping to Yosemite rocking out to “Valentine”…

So, one last question… a fun one. Can you give me a good story from your tour? Or maybe just recount some of the people you’ve met? It seems your travels in A Cross the Universe were part antics, part satire of Americans. I’m sure this tour has been just as interesting.

Well, every night is a funny story, because we’re 14 French guys stuck in the same tour bus. It’s almost like a traveling sect.

Planning to get married again during your time in Vegas [the 4/19 show]?

It will depend on how drunk I am… or if you’re around, who knows?