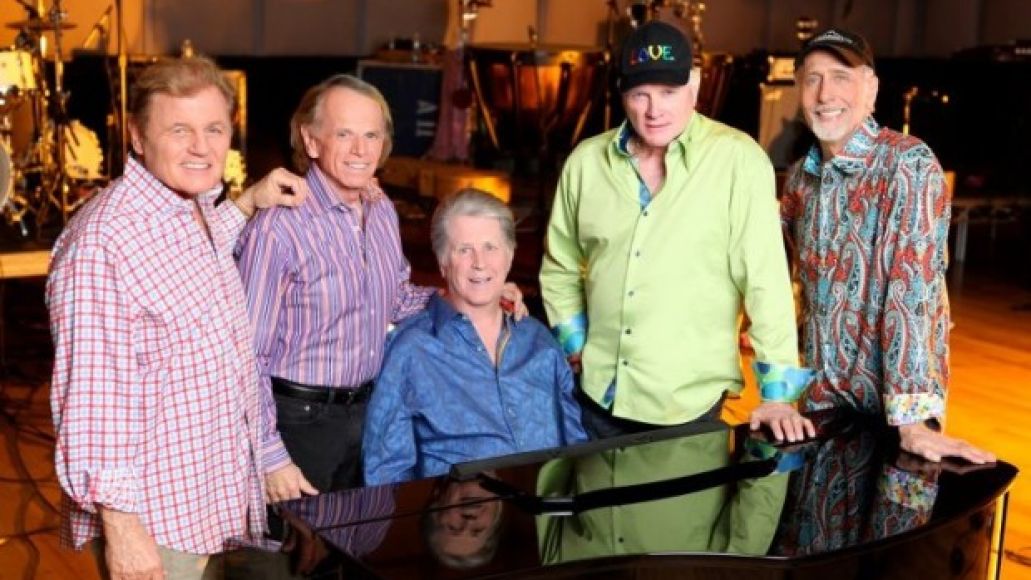 In less than a week, The Beach Boys – read: Brian Wilson, Mike Love, Al Jardine, Bruce Johnston, and David Marks – will embark on their 50th anniversary tour, which includes a highly-anticipated headlining performance at New Orleans Jazz & Heritage Festival next weekend. Now, based on recent Beach Boys gigs, those featuring only Love, Johnston, and on occasional “lucky” dates, John Stamos, the band tends to knock out close to 40 songs each night (mostly because their hits span two to three minutes in length). But, with Wilson, Jardine, and even Marks in the picture, one has to start speculating what they’ll play and if they’ll even dig deep into their back catalogue.

“We have to make sure we have a great flowing song list but also make sure we don’t sound like a greatest-hits band,” Johnston told The Los Angeles Times back in February. “We have a lot to balance.” True, but there’s also a lot of opportunity. Given the band’s tumultuous years throughout the ’70s, ’80s, and ’90s, this 50th Anniversary Tour really opens the door to hear some of the later material that either went unnoticed or never had a chance to be performed by the full band. Also, considering last year’s achingly long-awaited release of The Smile Sessions, there are a lot of unspoken goldies to consider. With that in mind, it’s anyone’s guess what will actually end up in these sets.

But, hey, it doesn’t hurt to make some suggestions.

Okay, let’s get the jokes out of the way. Yes, this was apparently the first song Brian Wilson wrote “under the influence,” but Mary Jane aside, it’s a tender, sweet number that showcases the combined strengths of Wilson and Love. The two penned this one together, and considering they’re the main forces behind this reunion, it’d be a fitting oldie to dust off. Plus, whoever’s holding the tambourine should have a ball, too.

Originally sung by Carl Wilson, it would be intriguing to see this one reworked. No idea who could commit to those vocals. Though, if they slowed things down, Brian might be able to shuffle something out; after all, that theremin line is worth revisiting, and the organ solo at the end could add a spicy boogie if things get a little too tender.

It’s a shame how many people haven’t heard The Beach Boys’ 1977 underrated classic, Love You. While there isn’t a true hit per se off the LP, it’s one of the last albums to be written and produced solely by Brian Wilson. “The Night Was So Young” is one of a handful of strong ballads on the album’s second half. Short, angsty, and classically direct, its chorus soothes the bones the way every great ’70s ballad should (and did). Carl offers support here, but it’s really Brian’s track and bears slight similarities to his more recent solo work, namely 2008’s That Lucky Old Sun – so, kind of an easy win-win.

One of Brian Wilson’s crowning achievements, this Pet Sounds favorite should be a staple on this tour, if only for the fact that Brian’s the sole vocalist within the track. There’s no telling yet if they’ll have strings accompanying them on tour, but one would hope so if they plan on ripping into the real meat off The Smile Sessions. Whatever, with or without strings it’d bring tears to anyone’s sunny day. Ahem, tears of joy, that is.

Another cut off of Love You, this one bounces back between gloomy and sweet, making it somewhat erratic. It’s charming overall, though, and while Dennis and Carl Wilson were a big part of this one vocally, it could really work today. The slightly menacing synth line adds this nice changeup that juxtaposes itself well among the sea of harmonies. Whoever takes Carl’s role at the end, though, really needs to nail it, but that goes without saying.

Here’s an injustice: The Beach Boys’ 1970 LP, Sunflower, remains one of the band’s lowest-charting records to date, only slotting as high as 151 on the US charts. Sort of mind-boggling, especially given its critical acclaim. Hell, Pitchfork says it’s “perhaps the strongest album they released post-Pet Sounds.” With a track like “All I Wanna Do”, it’s easy to see why. Another collaboration between Brian and Love, this dreamy track exudes an almost shoegaze-like quality, predating the likes of The Jesus and Mary Chain or My Bloody Valentine by, oh, nearly 20 years. It’s highly unlikely they’ll dust this one off, but wouldn’t it be nice?

Picking songs off The Smile Sessions feels almost like a Sophie’s Choice sort of situation. Odds are they’ll probably roll out the staples like “Good Vibrations”, “Heroes and Villains”, and possibly even “Vega-Tables”. The other tracks, however, are up in the air. Now, “Cabin Essence” has always felt like a large chunk of an even bigger chunk of music, and it is, but it’s still a solid stand-alone track. Thanks to Van Dyke Parks and Brian’s trademark knack for lush, brilliant instrumentation, it would be inordinately hard to pull off live. But what’s quality without a challenge? Without a doubt, this sentimental meditation belongs on this tour.

Like the aforementioned “Wild Honey”, “Feel Flows” is all Carl, vocally speaking. But, here’s the thing: It’s the low-tone Carl, which means it’s almost Brian-like, if that makes sense. One of the strongest cuts off 1971’s Surf’s Up, “Feel Flows” comes chock-full of sugary sweet instrumentation, some of the band’s best, at least from their ’70s material. Just hearing those keys that unwrap the track would be magical. If there’s any Carl-led track to reproduce, it’s this one.

Lyrically, this track couldn’t be more fitting for the band now turning 50, and emotionally, “I Just Wasn’t Made for These Times” takes on a whole new meaning, adding a sage-like somber, reflective tone that outweighs the adolescent angst of the original. The band culls plenty of tracks off Pet Sounds, but it’s up to Brian on this one, who sings lead vocals and who’s always been the sole proprietor of this anthem. With the songwriter back in the fold, it’s time to make this one a staple again.

“God Only Knows”, “Wouldn’t It Be Nice”, and “Good Vibrations” always sit atop lists that read “The Beach Boys Greatest Songs”, and yet more often than not “Surf’s Up” washes away. Granted, those three songs are some of the best tracks ever written in pop music history, but “Surf’s Up” is a whole other beast. Similar to the previous inclusion, this one’s a pure Brian track, and it always will be. He performed this regularly on his SMiLE tour back in the early aughts, but he’s since left it behind.

If there’s one track off The Smile Sessions that just needs to be heard live – especially on this tour – it must be “Surf’s Up”. There’s nothing like it. The harmonies, the minimalistic piano work, and that engulfing oasis-turned-flood of instrumentation just sweeps you away. Come to think of it, it’s hard to imagine what it’d even sound like live today, what with everyone together again and so many years after the fact. No more mystery, fellas, let’s hear it.

Lemme Get an Encore: The Beach Boys