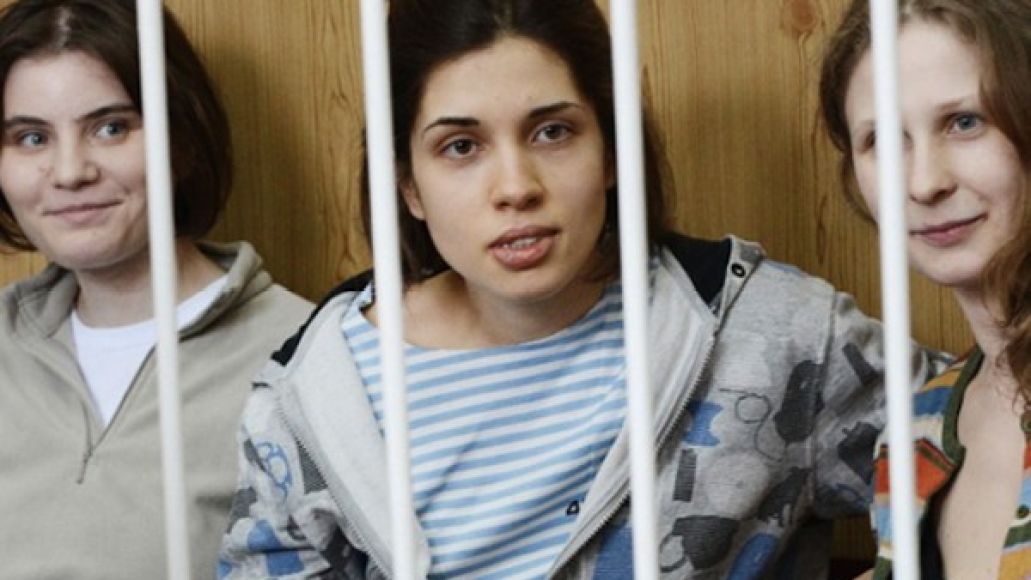 Maria Alyokhina, Nadezhda Tolokonnikova, and Yekaterina Samutsevich — the three members of Russian feminist collective Pussy Riot who were arrested on charges of hooliganism following a protest against the Kremlin — were found guilty in court today and sentenced to two years in prison.

Alyokhina, 24, Tolokonnikova, 22, and Samutsevich, 29 were charged with “hooliganism motivated by religious hatred or hostility” in February after performing a one-minute protest song, “Our Lady, Chase Putin Out”, at Moscow’s Christ the Saviour Cathedral. The women were denouncing the ties between Russian President Vladimir Putin’s regime and the Russian Orthodox Church. (Watch footage of the performance below.)

According to The Guardian, Judge Marina Syrova said Pussy Riot was “motivated by religious enmity and hatred, and acted provocatively and in an insulting manner inside a religious building in the presence of a large number of believers.” She frequently referenced the colorful nature of the band’s clothing and said it was not acceptable for church.

Pussy Riot remained resolute even as it became increasingly apparent that they’d be found guilty. One of their lawyers Mary Feygin tweeted shortly before the verdict: “Well, they’ll be convicted. No use in harboring any illusions. However, no one is afraid.” Another, Nikolai Polozov, said “We will oppose any illegal sentence that envisages their imprisonment, and we will appeal it in Russia and in international courts.”

Shortly before the verdict, Tolokonnikova sent a handwritten letter to Putin saying the trial had united disparate forces of dissent against those who “threaten destruction of the liberating, emancipating forces of Russia,” reports The Telegraph.

“There is no personal malice,” Tolokonnikovasent’s letter continued. “But there is a political one. Our term in prison is a clear and distinct sign that freedom is being taken away from the whole country. And that threatens destruction of the liberating, emancipating forces of Russia. That’s what makes me angry.”

After being convicted, all three women were seen smiling as the judge read out witness testimony against them, reports The Wall Street Journal.

The trial gained international attention, and the punk band garnered support from countless members of the music community including Pete Townshend, Bjork, and Jarvis Cocker.

Today has been declared Pussy Riot Global Day, with calls of protest and support planned across the world. Find out more information at freepussyriot.org.