There is something deeply, embarrasingly satisfying about The Killers’ slick shlock pomp-rock. Even when what they’re singing about makes little to no sense. I still need several primers on what “I’ve got soul but I’m not a soldier” actually means and Southland Tales did not help me out at all. The best of the widescreen melodrama in which they traffick — a perfect analogy for the band’s Las Vegas stomping grounds — taps into a place that is part guilty pleasure and part first-pumping amygdala response. At their best, The Killers are basically Coldplay for maximalists.

Battle Born is the Killers’ latest record and, as far as Killers records go, it’s fine. It’s certainly not great, and it may not even be good. Which warrants the question, what does a “good” Killers record really mean? There are microscopic differences in quality between any given Killers song. Mostly it depends on how effectively the band toes the line that separates things like The O.C. from things like Days of Our Lives. In this example, “Bling (Confessions of a King)” would be someone’s evil twin coming back to life to interrupt a wedding by announcing that she’s pregnant with the groom’s baby.

If that sounds like it’s going overboard, well that’s kind of what The Killers do. The emotional stakes are perpetually raised in Killers songs. “I believe we never have to be alone,” “Don’t want your picture on my cell phone, I want you here with me,” and “Is this real or just a dream?” are all lyrics that appear on Battle Born, ones that Brandon Flowers sings as though he’s actually in the middle of a battle, belting out emotional platitudes over explosions of arena-synth riffs. Enormous church choirs show up to supplement the choruses of more than three songs. There are at least three more moments that try to out-Boss the Boss but don’t even manage to out-Anthem the Gaslight Anthem.

To be fair, Battle Born does occasionally sound like the Killers are trying to expand their 50 Shades of Drama palette. “From Here On Out” has a sort of country shuffle to it, and “Runaways” reimagines Jersey rock through the band’s default Duran Duran Instagram filter. The problem with even these vague attempts at “branching out” is that the band still covers everything with swathes of “Total Eclipse of the Heart” synth pads and CR-78 drum sounds. The small differences on Battle Born might have actually showed up if the band had reigned back a little bit.

But then they wouldn’t be The Killers. Nuance has never been a part of their playbook, because they’ve never done it remotely well. To expect them to start now is sort of like railing Snoop for never getting socially conscious with his raps. The fact is, everyone listens to “All These Things That I’ve Done;” nobody listens to “Spaceman”. The best songs on Battle Born, the ones that you’ll find yourself humming at work, or the ones that you’ll turn up when they come on the radio, are the ones that buy into the Killers ethos wholeheartedly without all of this dalliance into “more complicated music.”

The bigger tragedy of Battle Born isn’t that it sounds like every other Killers record, because every Killers record sounds like every other Killers record. The tragedy of Battle Born is that even when it shouts at the top of its lungs, it never reaches that special place that the band accidentally trips into with their best material. Nothing here approaches the unabashed grandiosity of “Mr. Brightside” or the, uh, unabashed grandiosity of “When You Were Young.” The trick the Killers have always been able to play is to convince us lines like “He doesn’t look a thing like Jesus” or “You had a boyfriend that looked like a girlfriend” were not embarrassing things to roll our car windows down and sing, mostly because they were paired with some sort of unimpeachable hook. On Battle Born, those hooks just aren’t there. What exactly is supposed to be memorable about the limp, simpering “Deadlines and Commitments?” Nevermind, I’ve already forgotten it.

Battle Born isn’t a total loss; there certainly are songs that you’re going to remember. “Runaways” is the type of stomping classic rock escapist fantasy that’s played well throughout time. “Here With Me” features some sweeping, grandiose end-credits balladry. “The Rising Tide” is maybe the most representative primer on what The Killers are supposed to sound like. And the closing title track’s shout-along is probably the best song on the record. Unfortunately for The Killers, you’re not going to remember them very long. Certainly not as long as “Mr. Brightside”, and probably not even as long as you’ll remember singing “Are we human or are we dancer?” Instead, you’ll remember the songs these highlights remind you of. “Runaways” tries to be “Born to Run” but couldn’t even qualify as “Born to Jog”. “Here With Me”‘s greatest ambition is to be slotted somewhere on a new volume of Buzz Ballads between Collective Soul and “Lightning Crashes.” And Eddie Money should be getting paid for how much “The Rising Tide” sounds like “Take Me Home Tonight”. Aside from “Battle Born”, none of the other high points succeed against the influences The Killers have long been aping, much less against those times when the band has hit that sentimental ache that exists in all of us. 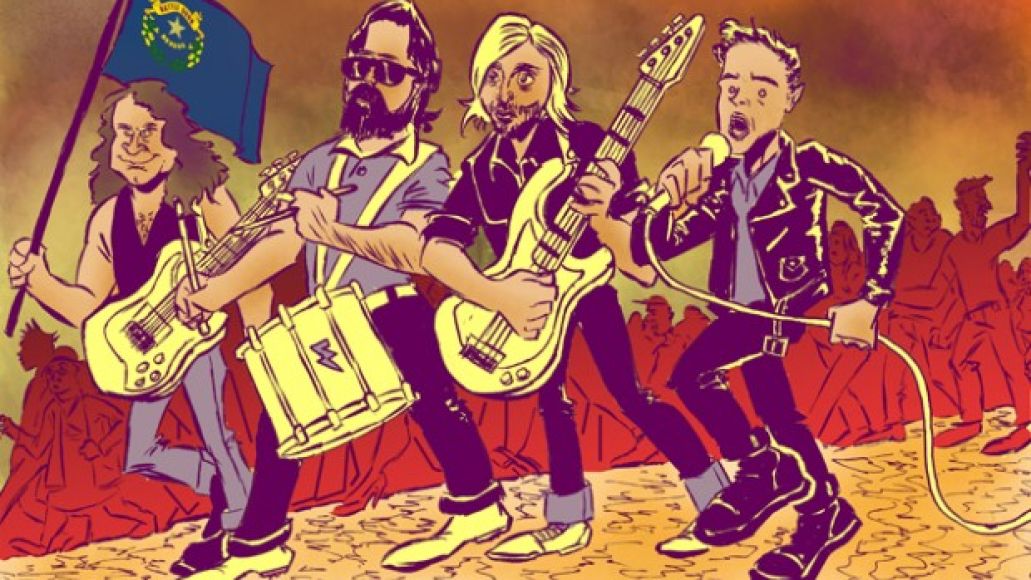