The best of Andrew Bird’s heady output has indulged a fetishism of old-fashioned, folk music, paired with idiosyncratic, philosophic lyrics that dive headlong into post-modern pondering. Though rooted in traditional instrumentation and twee peacefulness, Bird’s introspective wondering kept things from bounding entirely into the past. Contemplating things like zeroes and ones floating through the sky on the glorious “Masterfade”, and analyzing self-analysis on the re-cyclical trio of “I”, “Imitosis”, and this year’s “Eyeoneye”, Bird’s neuroses twisted tried and true formations into something unique and beautiful, more than the sum of its parts.

So, when word came that he’d be releasing a companion piece to this year’s Break it Yourself, one that would feature covers of old-school country acts along with re-workings of tracks from that new album, several signs pointed to this being one exclusively for Bird die-hards and the Starbucks “Handpicked Favorites” crowd. His palate of sepia tones coupled with essentially contemporary lyrical twitches loses much of what makes Bird special, instead relegating Hands of Glory, to a heartwarming and honest tribute – and little else. Bird manages to work his self-analytical tack into the album here and there, but it never stood a chance to matching the heights of his original work, and likely never intended to.

Yet again mining his own past, Bird references “fingerlings,” the title of a series of further self-referencing self-releases, in “Something Biblical”. On that track, his eye-bagged, lonely take on rural heartbreak is, as ever, poetic and lovely: “I see your coat, and it needs sewing/ these seeds will sow the cornsilk rise/ but in your absence nothing’s growing/ and still the county remains dry.” His mournful violin solo moans and trills like there’s some blues in the fields, tones that must evoke eye-closed head shakes from even the most cynical listener.

An early promo video for Hands of Glory showed Bird and his backing band recording live in his home barn/studio, all crowded around a single microphone. That close-knit, communal warmth suits the covers. He vocally affects Townes Van Zandt’s southern croon on “If I Needed You”, harmonies abounding. The traditional “Railroad Bill” has been done by a million different artists, and Bird is now one of them, his bouncy take ambling into the sunset. Even the apocalyptic burn of The Handsome Family’s “When That Helicopter Comes” needs that presence to communicate its burnt-field intensity. The covers are uniformly immaculate, spotless, pitch-perfect renditions, Bird offering his deepest respect to those that came before. That said, they hardly alter the original. Good covers like these embody the power of the original, but more often than not, great covers offer a unique twist.

When returned to himself, to his own time, Bird proves his power. “Three White Horses” opens the set preparing for death, and “Beyond the Valley of the Three White Horses” closes it by expanding into haunting, sweeping, Leslie-speakered oblivion. Break It Yourself featured “Orpheo Looks Back”, his version of the tale of mythic first poet Orpheus, who retrieves his beloved from the underworld, but can’t resist the desire to look back at her, the only thing that would send her back away from him. In true Bird fashion, he looks back at the song about looking back and the resulting madness, further entrenching the heartbreak of the story. While the original featured plucky violin looping and an upbeat rhythm, the mournful “Orpheo” here features Bird and an acoustic guitar, with added violin swoons. The re-vision is masterful, heartstring-breaking, an improvement from its first rendition by miles. 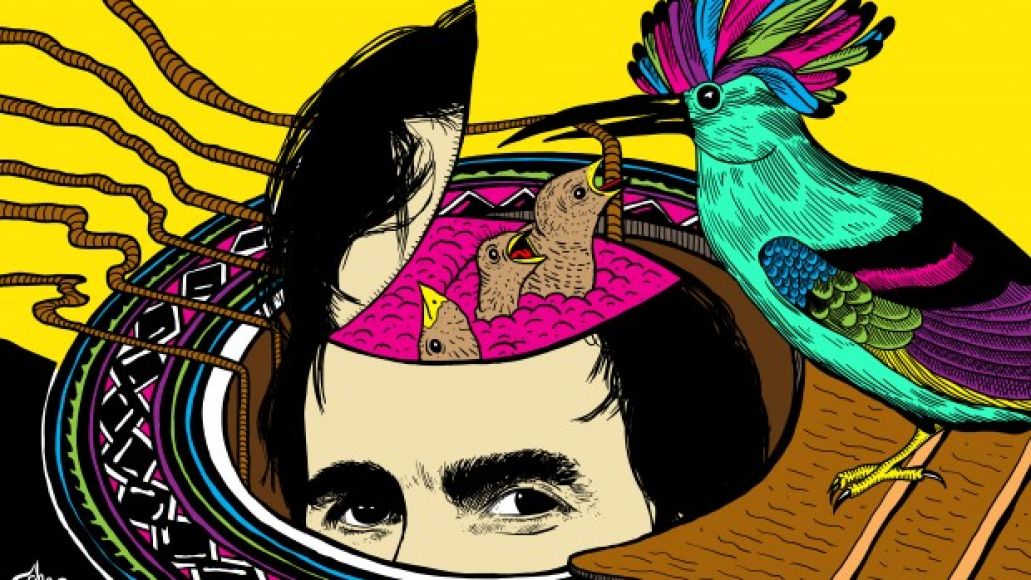