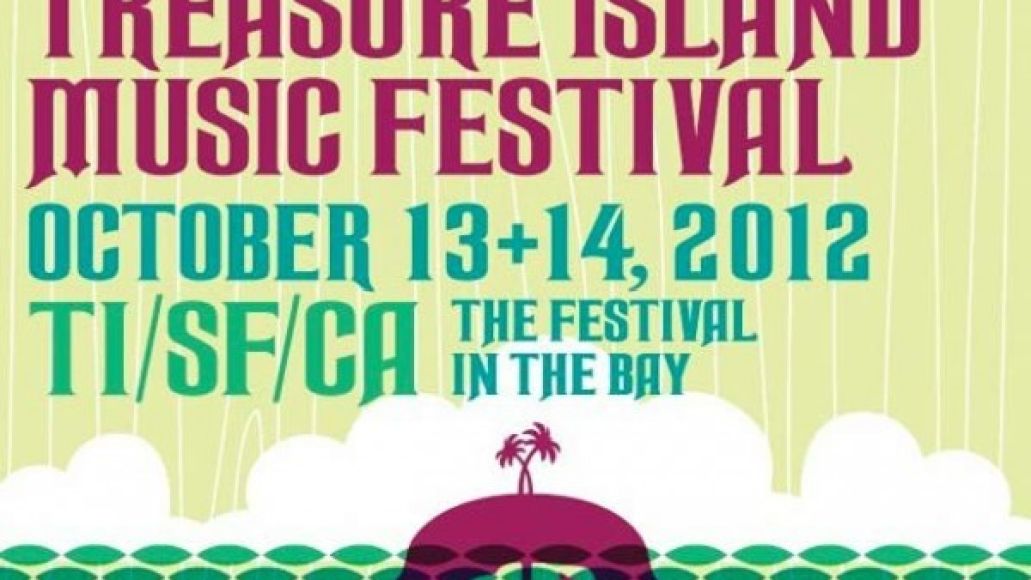 San Francisco’s Treasure Island Music Festival is a bit under-appreciated by outsiders, but that’s how we like it. The festival’s proximity to the city’s trademark bay makes the transition from day to night unforgettable, as the autumn-tinged sunset that hugged the surrounding skyline on Sunday evening was a picturesque reverie.

While most of the bands on this year’s lineup are currently or have been touring for the past year, there were a few rare performances thrown into the mix. Public Enemy stormed out unabashed and full of attitude, Joanna Newsom remained in her own world, and The xx brought Coexist to life. Even this year’s festival staples like Best Coast, Youth Lagoon, or araabMUZIK managed to add subtle, mature differences that only perfected their now expected sets.

So check out some of my scribblings, and be sure to check out the gallery. It’s a good one. 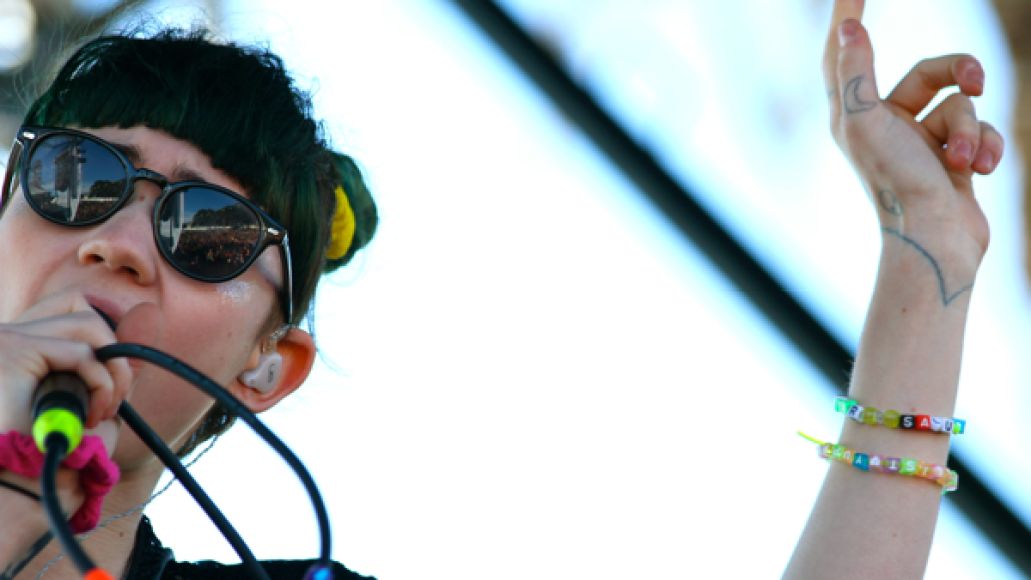 Grimes, aka Claire Boucher, offered up a short six-song performance, diving straight into “Symphonia IX (My Wait is U)” and other picks off this year’s Visions. With a light-hearted, coy smile she spun the entire set on her flower-adorned GAIA keyboard, flanked on both sides by her skeleton-costumed backup singers. Two songs trumped all: the surprising dubstep remix of “Oblivion” and her mind-watering collaboration with Blood Diamonds, “Phone Sex”. The eclectic dance party at the end only solidified everyone’s support of the budding gothwave princess. 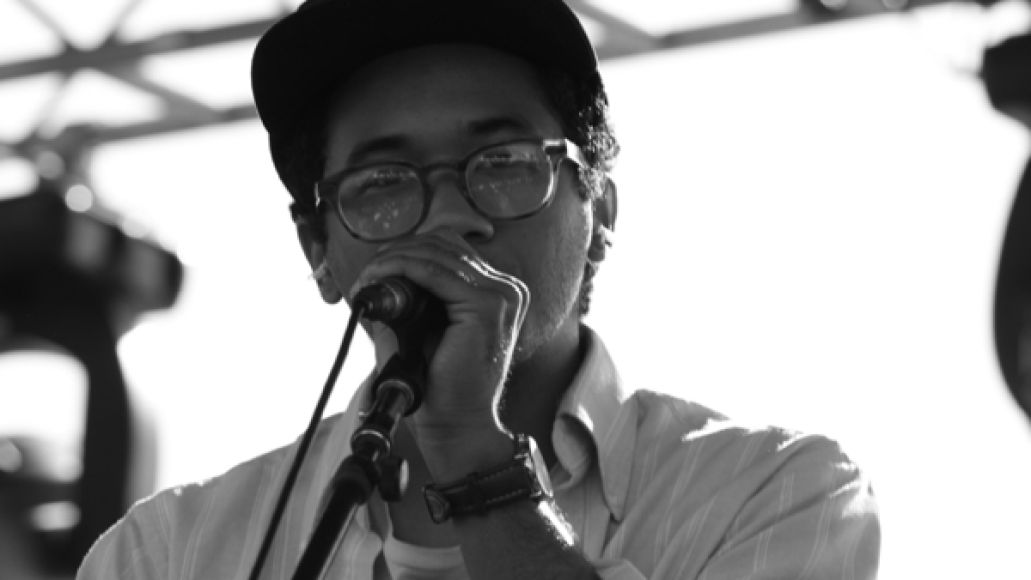 It’s my personal opinion that Toro Y Moi’s gone downhill following his 2010 debut LP, Causers of This, losing his provincial funk sound for something a little more commercial and pastiche (i.e. this year’s June 2009). And yet, never having seen Chazwick Bundick perform live before, I wanted to give him a chance. Beating away at his keyboard while crooning into the microphone, he relied mostly on the classics, playing tracks like “Talamak” and “How I Know”, both intelligent blends of electro and funk that are true to his style. “Low Shoulders” was the performance winner, during which the band seemed like they actually enjoyed being on stage. Otherwise, it was a show of little impact – quick, painless, and easy to forget. 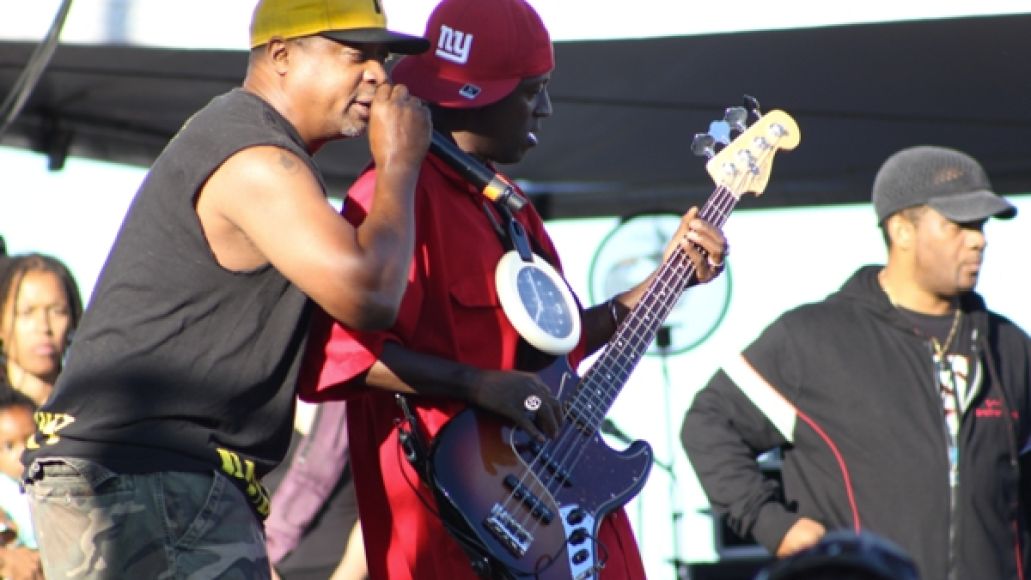 Public Enemy comes from the “entourage ideal”, the notion that you should cram as many people on stage as possible, even if one is just standing there in a soldier’s uniform doing “the robot”. There was Davey D on bass guitar, the legendary producer and rapper Chuck D, T-Bone on drums, rapper Professor Griff, DJ Lord, and, of course, Flavor Flav. Their performance pinballed between a mix of bonafide rapping, drunken rambling, and social commentary.

As expected, excellent renditions of seminal classics like “Bring the Noise”, “Don’t Believe the Hype”, and ”He Got Game” rolled on by and hyped up the crowd. What wasn’t expected, however, was Flavor Flav’s dysmorphic puppetry. He danced about, offended the Bay Area by criticizing their baseball teams, interrupted Chuck D regularly, and came off as just really desperate and excited that someone, anyone, much less a whole fucking crowd of people, was listening to him. Regardless, he possessed a strange charm that was dazzling as much as it was annoying. Someone get this man in the Rock and Roll Hall of Fame. 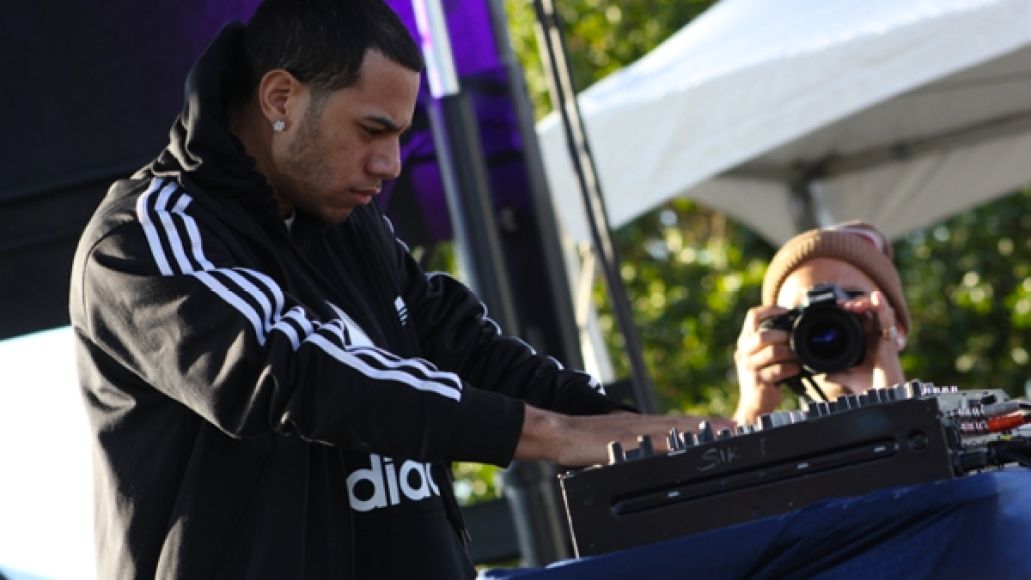 After an hour of fists in the air and chanting “fuck racism” during Public Enemy, Abraham Orellana of araabMUZIK kept the energy going, constructing a dizzying 30-minute stream of beats on stage, making araabMUZIK’s performance one of the festival’s surprises. He dropped the heaviest beats I heard all weekend, a bass-heavy set of fresh dub and modular mixes from his recently released Instrumental University. Though mostly a mash-up medley, new tracks like “1,2,3 Grind” stood out, as well as a remix of Flux Pavilion’s “I Can’t Stop”. No one at Treasure Island could resist the tantalizing lure of the music, and hyper dancing and popping and hopping was to be seen everywhere. 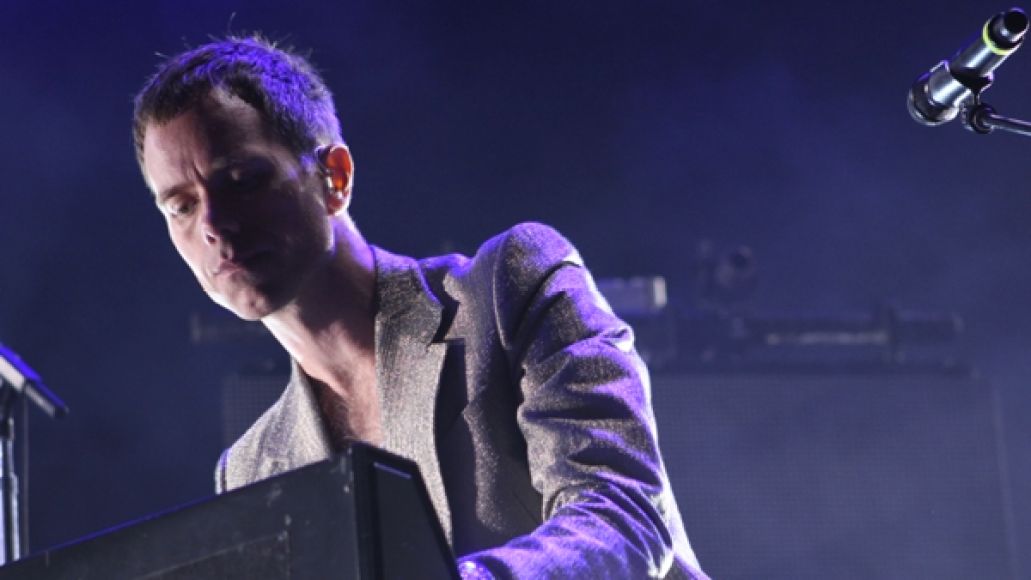 It was hard not to love The Presets after their glittery version of “Kicking and Screaming”, off 2008’s Apocalypso. Recognizing a good thing when they saw it, the Australian electronic duo stuck with the album and tossed out cuts of ”Talk Like That” and “If I Know You”. The true highlight was ”I Go Hard, I Go Home”, off their 2005 debut Beams, which left Julian Hamilton to sing his heart out like the glam rock maven he is. 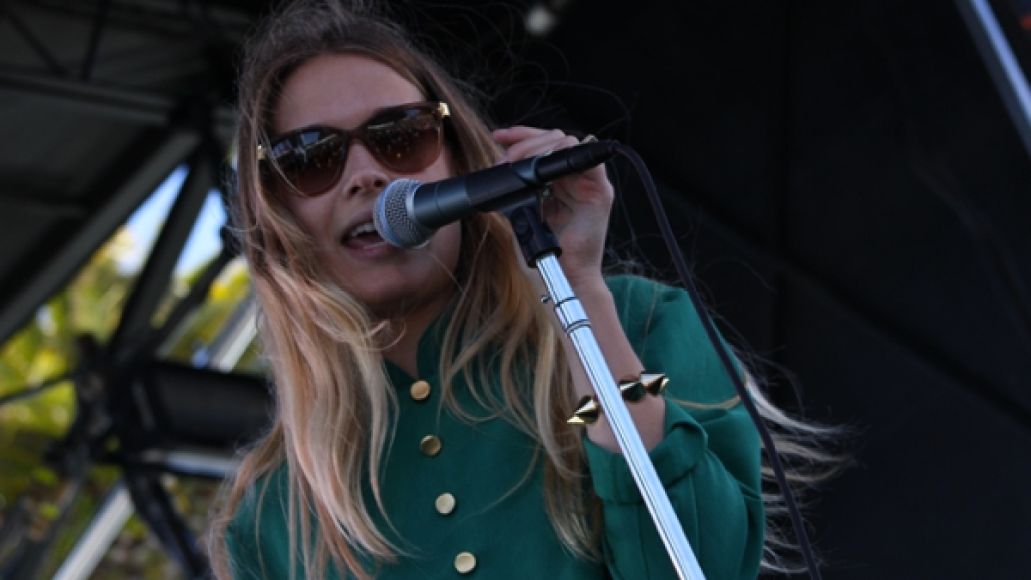 Newcomers Wild Belle held their own on Sunday, playing a short 30-minute set from their small selection of recorded tracks. Wild Belle sound like a Santigold spinoff, with singer Natalie Bergman’s smoky growl and Elliot Bergman’s saxophone skills. The duo are a funny pair – Natalie’s got sun-kissed curly locks and an air of nonchalance, while Elliot looks like Joaquin Phoenix circa 2010. If you missed their set or haven’t had a chance to give their EP a listen, “Keep You” and “Take Me Away” are favorites, and the songs sparkled when performed live as well. 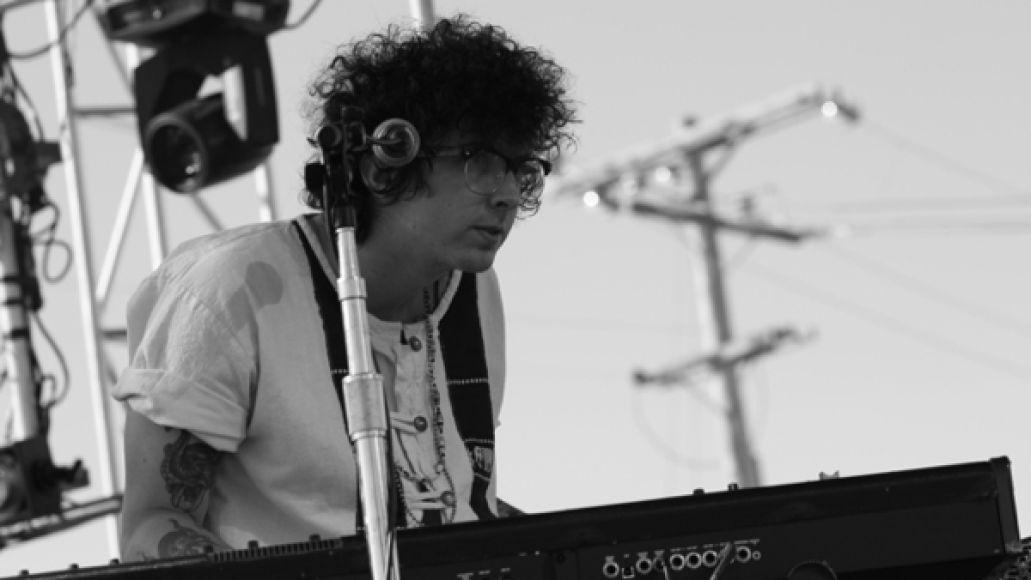 Trevor Powers of Youth Lagoon emerged from the woodworks on Sunday to perform select tracks off his sole album released to date, 2011’s The Year of Hibernation. Powers had a curious appearance, wearing a tribal tunic, eyeglasses that covered half his face, and a shock of curly brown hair. His voice was yearning, pining, adolescent; his songs, though simply constructed, demanded attention. He played his best tracks (e.g. “Cannons”, “Posters”, “17”, and “July”), hypnotizing the crowd with his timid, shining music that scored his vulnerable stage presence. 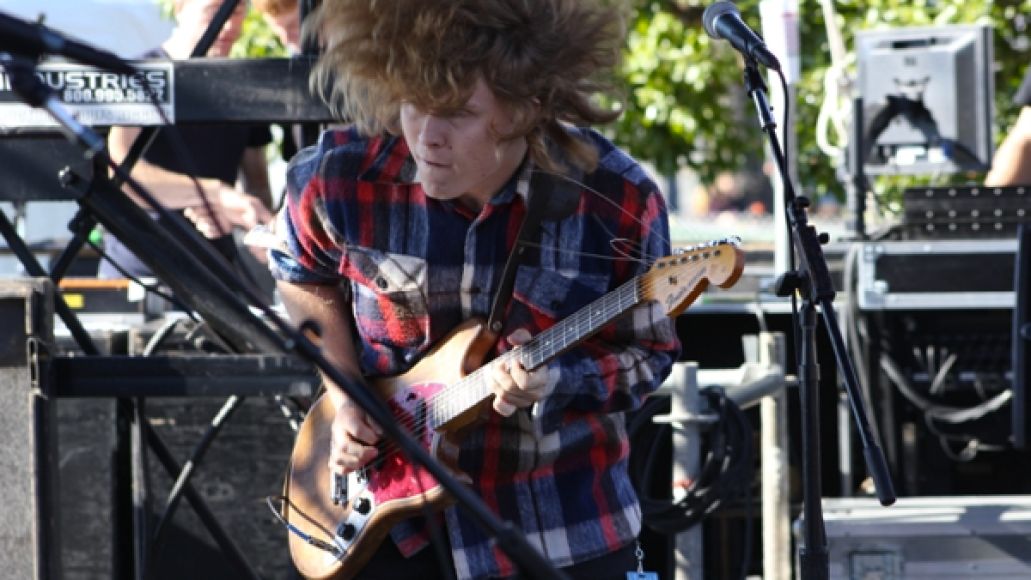 San Francisco treated its hometown hero well. Towards the front of the stage, Ty Segall was entertained by the festival’s youngest attendees moshing and crowd surfing nonstop, while older kin nodded toward the back in drugged-out reveries. Everyone remained fully absorbed to the set’s deafening noise, however, which shifted over his vast collection of 2012 material, especially Slaughterhouse favorites like ”Death”, “I Bought My Eyes”, or set pinnacle ”Tell Me What’s Inside Your Heart”. Though only 40 minutes long, the set itself felt like it stretched out to two hours of urgent, reckless distortion. That might explain why most walked away insisting they had seen the festival’s water mark. 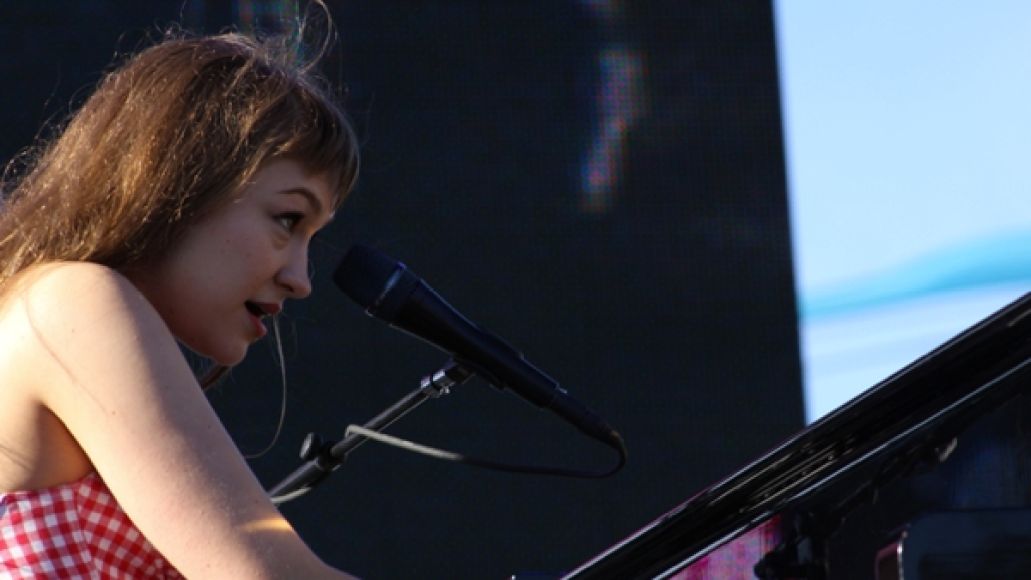 Just like Public Enemy, Joanna Newsom was this year’s wild card. At first, the acclaimed songwriter appeared rather anxious as she offered up her twinkling rhymes to one of the largest crowds she’s seen in a while. She found her footing eventually and swept through tracks like “In California” and “Soft as Chalk” off her voluminous 2010 release, Have One on Me, even debuting a new track titled, “Look and Despair”.

Newsom’s quite a sight to behold, though. Her on-stage style has her resembling a caricature of sorts, as she contorts her face through each variance of her multiple vocal ranges. It’s this unique facet to her character that makes her such a lovable artist, yet there was something remiss about Sunday’s performance. It lacked the intimacy her music deserves. She doesn’t just sing about personal experiences, she creates them, and that feeling was altogether not there. 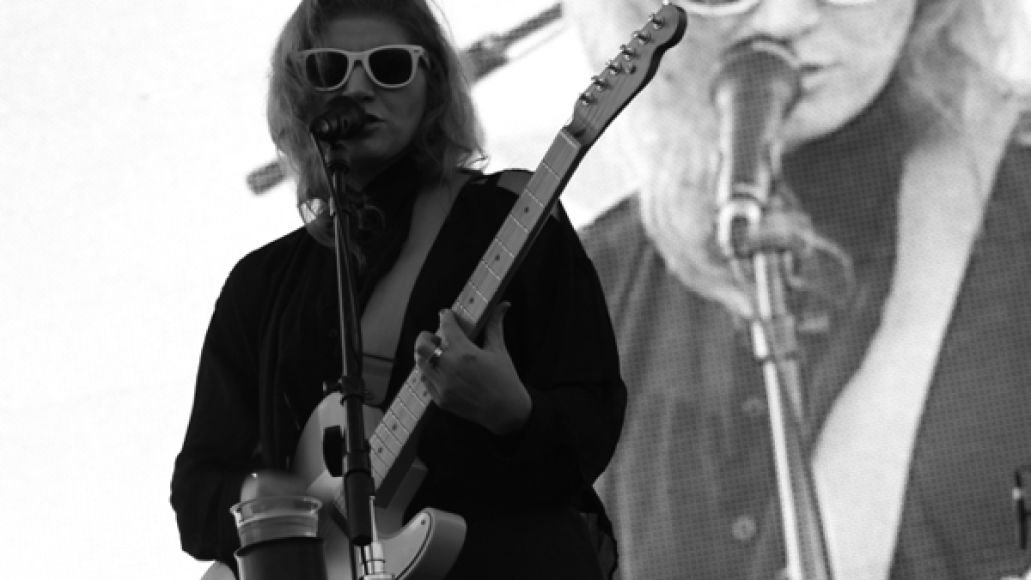 Similar to AraabMuzik, I was surprised by Best Coast. I’ve had a passing relationship with the band, listening to what I regarded as their “pop punk fluff” once or twice. I certainly didn’t expect to credit them as one’s of the weekend’s best, and listening to the band anew, I’ve finally come to appreciate their dreamy romanticism. ”Last Year” and “Do You Love Me Like You Used To” were pure California rock melodies, while “Summer Mood” was the band’s strongest live. As Bethany Cosentino joked before starting the song: “Do you guys like the summertime? Fuck yea, it’s California – it’s forever!” 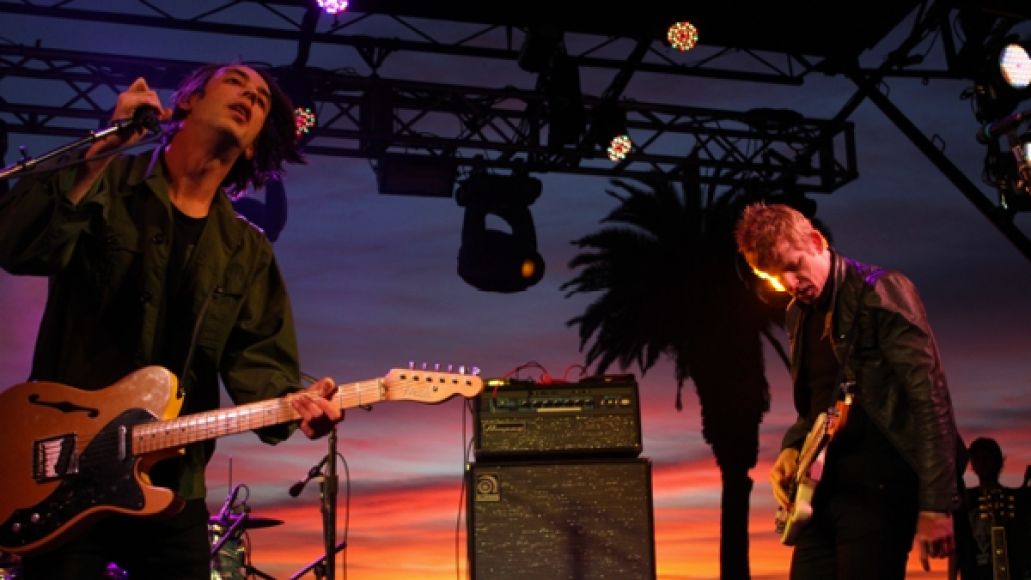 Maybe it was the delicious sunset, that technicolor fury painted across the sky, but Divine Fits’ performance on Sunday was a magical one. It’s an old story by now: Spoon’s Britt Daniel, Wolf Parade’s Dan Boeckner, New Bomb Turks’ Sam Brown formed a band (Divine Fits), released an album (A Thing Called Divine Fits), and have received plenty of praise (a CoS Top Star, to boot). On Sunday evening, the outfit sparked up the crowd with their current single “Would That Not Be Nice”, injecting a heavy dose of psychedelia that cascaded against the live tambourines that shook down the night. It’s wildly stylistic how much control Boeckner and Daniel possess on stage, and it’s this brand of chemistry that packaged the stark new wave of “My Love is Real” and the sleek chills of “Shivers”. 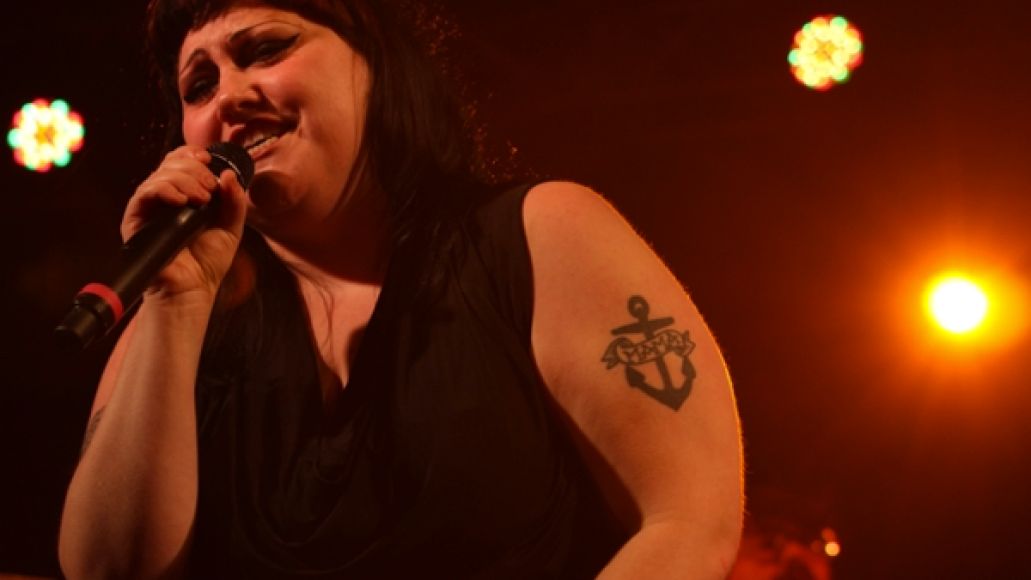 So, was anyone even at Gossip’s show on Sunday? Following M83’s charged performance on the Bridge Stage, no one really wanted to leave their spot to wander over to the Tunnel Stage to see Gossip. All of Treasure Island had a singular thought on their mind: getting a good spot for The xx. Gossip tried their best to shine on the smaller stage, and though it’s been a few years since their 2009 release, Music for Men, Beth Ditto hasn’t lost her unique voice or her rambunctious spirit. Gossip performed “Get a Job” and other singles from their new album, A Joyful Noise, as well as the classics, like “Love Long Distance” and a mix of Lady Gaga’s “Bad Romance” and “Listen Up!”. 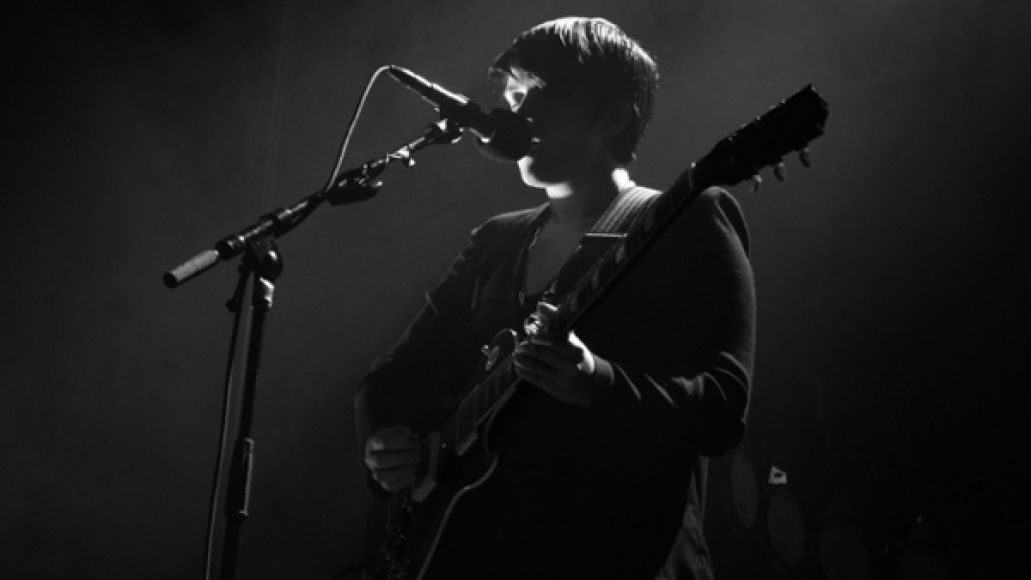 Truth: The xx’s set was near-identical to when I saw them perform live in Los Angeles in July – but at that time, Coexist hadn’t been released, and the band instead played xx almost in its entirety. This time around, Coexist material took further precedence, and so did Jamie xx, who in the last year has been turning many important heads as a producer. His influence this time around was pronounced and obvious, as the band’s music at Treasure Island was much more dance-driven than their recorded work. “Basic Space” and “Swept Away” were fun, choppier electro versions of their originals. 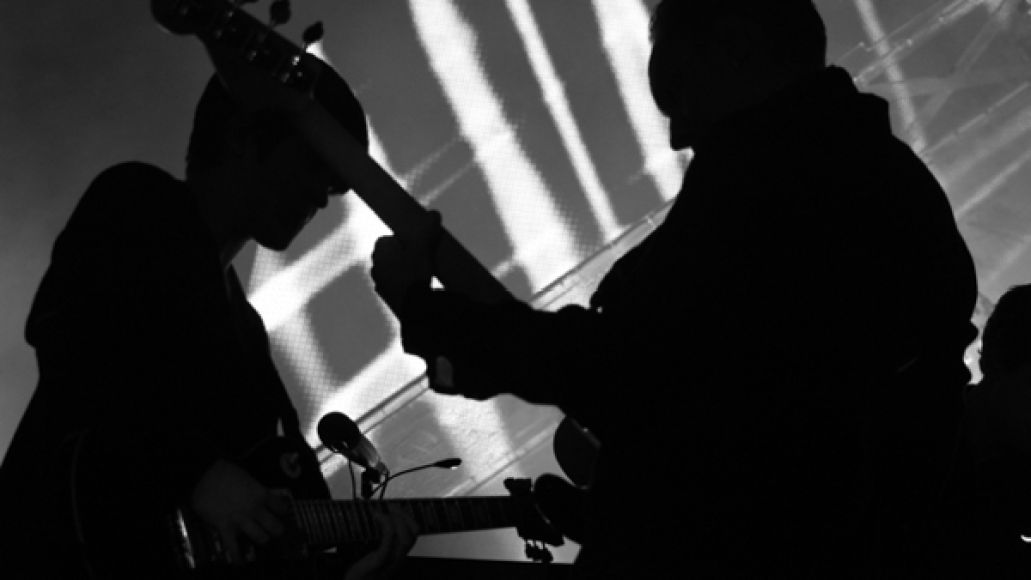 “Infinity” claimed the set’s true highlight, traveling from its minimalist beginnings to a loud, dramatic conclusion, with Romy Madley Croft and Oliver Sim pleading and screaming into their microphones. The band members were exhausted at its end, pausing to watch the “x” suspended above their heads fill up with smoke in anticipation of “Intro”. The xx’s deeply emotional, almost solemn performance was impeccable, and in hindsight, might have been the weekend’s strongest set.