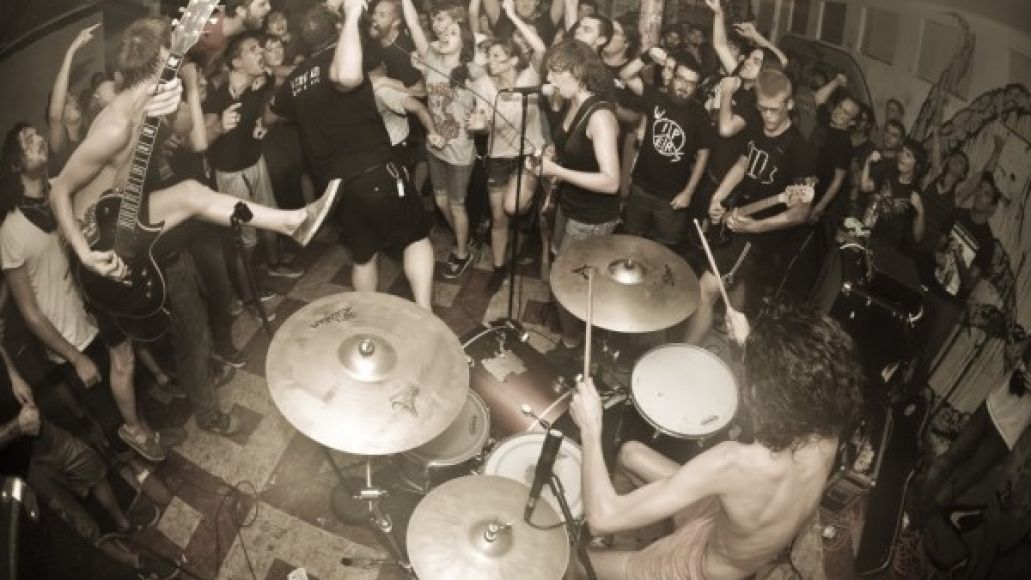 What is Consequence of Sound doing talking about a very young, very aggressive hardcore band? Code Orange Kids drummer Jami Morgan, 19, and I are trying to figure this out, too.

In our conversation, Morgan and I parse out what separates Code Orange Kids from all the many hardcore bands in the scene. What makes these Pittsburgh sprigs a band better than any other Pittsburgh hardcore band, or Boston or New York hardcore band? Why them and why now? What makes COK the it band of hardcore? We agree: essentially nothing. Because in hardcore, it’s not about being a “better” band. As he puts it: “I don’t think it’s important to assert yourself as being better for doing something that you want to do.”

Hardcore punk, as an overlord genre, can be hyper-spliced into micro genres varying on everything from record label to geographic location. As with any anti-mainstream sect, it can feel like a coded culture of music that’s full of sound and fury, signifying nothing — especially if you don’t know the signs. As Morgan says, “If I didn’t have friends in Pittsburgh that acted like it was cool to go to [hardcore] shows, I probably wouldn’t have gotten into it.” There are more factions than there are names for the factions: Are you on the outside looking in? What’s the gateway into hardcore culture? Can you Google “how to be a hardcore punk?” (Oh yes you can). 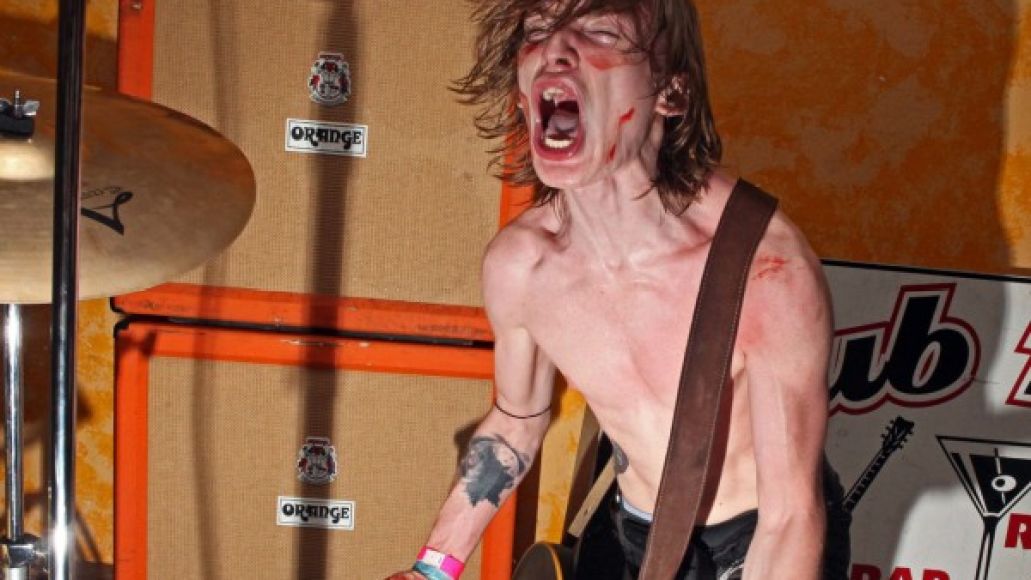 These kids – yes, kids, whose collective ages do not breach 80, who’ve been playing together since middle school, and whose name recalls something as outrageous as nuclear fallout and Mountain Dew — are not better, they’re just different. Their debut album is a balancing act: they manage to play to the kids standing at the back of the 100 max cap DIY venue, and to the kids standing outside of it.

“People get into hardcore and punk and people think that it’s like ‘your thing’, and you want to hold it tight, and if you don’t these kids who are into these things that you hate also get into it.” Morgan tells this to me from their tour van as they head into Boston for a show on the night before Thanksgiving. The band is in the middle of a grueling tour, splitting up Gaza and Full of Hell’s sets on the road. The following day, the band will drive back to Pittsburgh to have Thanksgiving dinner all together at Jami’s parents house. The band does things together, as he contends: “I’ve never seen a band do less of their own thing as much as our band.” The morning after that they’ll drive 300 miles back to Philadelphia for a show that night.

Let’s just go ahead and imagine hardcore was a constellation chart: Converge is the big dipper that pours into Code Orange Kid’s little dipper. When Bannon and Converge played a gig with COK in Braddock, PA, Bannon saw something in the band. He said, ”They immediately affected me, not because they were this perfect polished machine or this really professional band, actually far from it. They were this loose, chaotic, monstrous sounding band… They were doing something soulful. They didn’t sound like other bands, or were trying to emulate other bands.”

Converge guitarist Kurt Ballou recorded/engineered both Converge’s remarkable 2012 album All We Love We Leave Behind and Code Orange Kid’s debut LP, Love is Love // Return To Rust, so while COK may not be emulating Converge, the sludgy guitars and huge low-end will immediately and objectively sound like Converge. But the dynamics COK ride in the 27 minutes of Love is Love // Return To Rust weren’t born of the tutelage of Ballou.

“We planned everything out ahead of time,” Morgan says. “When we wrote the record we planned every cut, every break, — [Ballou] helped make it sound good.” Listen to the shift in the middle of the song “Liars // Trudge” as it goes transitions from gale-fore hardcore to the eye of the storm. The way it’s sequenced in the album, along with the other interlude of sorts doesn’t just serve as a break in the pummeling, it connects the aggression, gives it more weight and shape – making it all the more real, like the actual dynamics of a war, be it a verbal argument or physical fight.

“I always liked bands who did interesting stuff in hardcore, like 108 or Burn or Blacklisted  or Rorschach,” he adds. “I wanted to make a record more of a picture, and put a lot of peaks and valleys in there.”

Morgan says the use of the double-hash marks “//” to separate the songs on the record (and the album name) are because he sees the songs in halves. They’re not just breakdowns or interludes, it’s all texture and every one in the band inverts the rage and pulls it inward. The record opens with Meyers’ black metal scream on “Flowermouth (The Leech)” and not but four minutes later he’s her ghostly, juvenile sing-song voice that haunts the second half of “Liars // Trudge”.

“We listen to a lot of indie music, a lot of shoegaze and dream pop and we wanted to incorporate that,” he continues. “It came out kinda post-rocky, but we were more playing with those ideas. Indie bands, shoegaze bands, stuff like that. We all love Lush, we love The Smiths, and we kinda wanted to have that aspect involved. 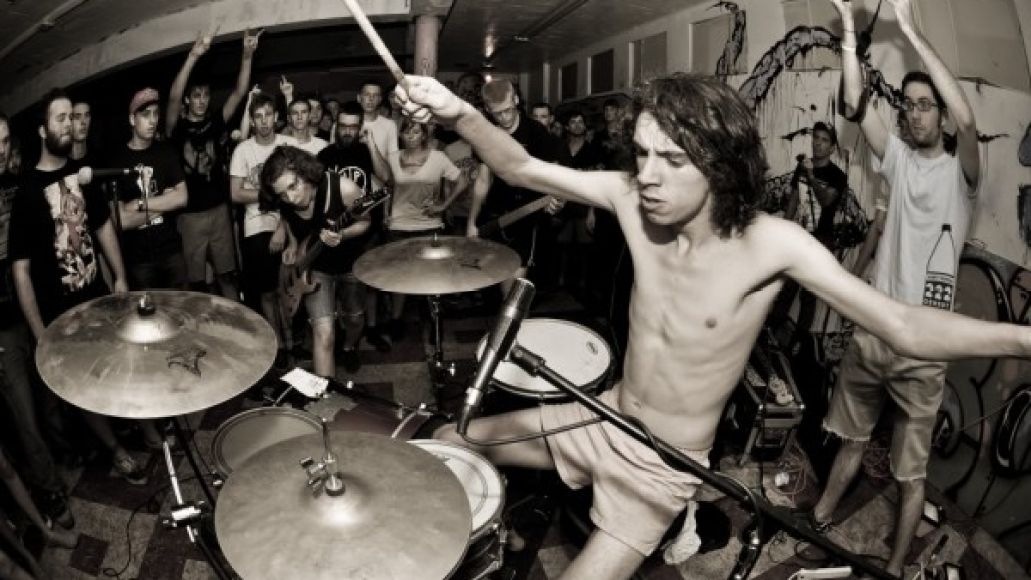 “If you really love hardcore music, and you really care about it, you tend to get bored with the same thing, that’s why people tend to drop out after a certain age. On the other hand, people get upset if it’s not the same thing over and over again – if it’s not what they’re used to. You’re walkin on a thin line – but we don’t really care about that.”

And it’s because they don’t care that they manage to walk that thin line so well.

“I’m a talker, and a complainer, and I have a lot to say.” Morgan says he struggles with depression –the people in and out of his head are always in the throes of something on the album — but he won’t go on medication for it. Instead, he sounds effervescent on the phone; he’s humble, grateful, excited, and totally shocked that there’s “over a hundred kids at a show.” He ruminates: “For us? That’s crazy.”

Code Orange Kids aren’t standing at the intersection of indie and hardcore ushering The Suburbs fans into the door that reads My War, but their music — even their previous, bone-raw Cycles EP – reaches for something outside that sweaty, familiar  hardcore room. Right now, the age of the band is their most valuable asset: they’re emotional, they’re eager, they’re hungry, and they’ve yet to wrestle with that beast of self-awareness.

Code Orange Kids aren’t a “smart” hardcore band, or an “indie” hardcore band, but their affecting debut hints at something that plays to people beyond the culture while still being of the culture. For a bunch of kids who can’t even get into bars yet, that’s what separates them from the rest. That’s what makes Love is Love // Return to Dust  a remarkable debut. And, that’s why we talked to Morgan.