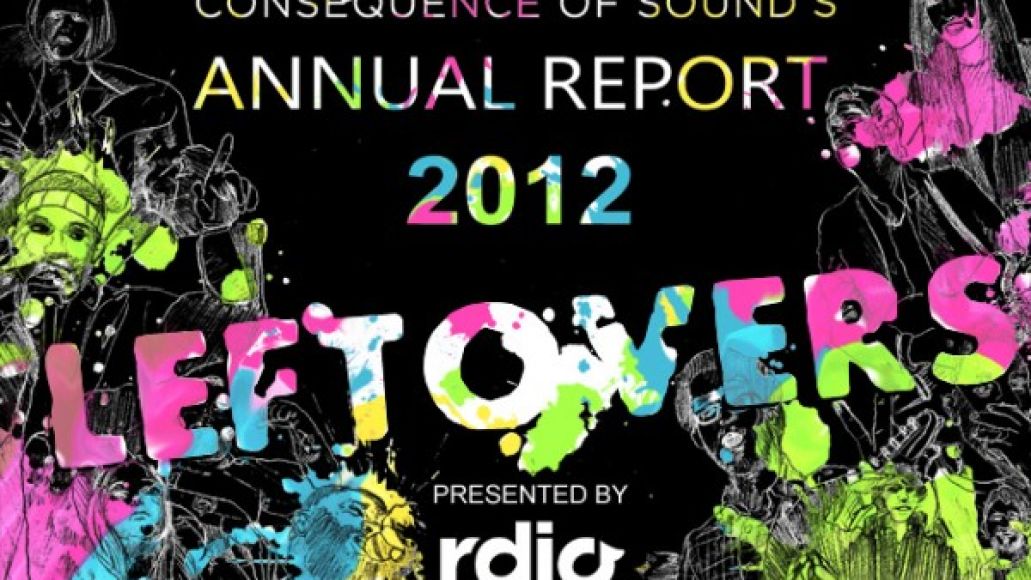 Welcome to the end of 2012, and possibly the world as a whole if you’re so inclined to believe.

Once again, we’ve taken the stray thoughts that fell through the cracks in our Annual Report and compiled them into one (hopefully) comedic list. As my esteemed colleague Jeremy Larson wrote last year, “Year-end summaries, lists, recaps, and reports are just study guides for an exam that’s never happening, you guys.”

True, but by listing things and poking a little fun, we’re doing our part to remind you that the music industry can be a pretty funny place. We’re also encouraging you to stay on your toes through the endless cavalcade of weird on this wacky round ball we call Earth. So, please, enjoy our attempts to illicit a few chuckles, and if we’re really doing our job, that kind of laugh that makes your sides ache.

Best Music-Related Tumblr: What if Adele was Mrs. Doubtfire?

Overachiever of the Year Who Refuses To Admit It: Ty Segall

Who owes us money because they bet that My Bloody Valentine’s album would be out in 2012? Alex Young

Most Annoying Musician to Cover in 2012: The Flaming Lips

Most Annoying Musician In General in 2012: Cee-Lo Green

Biggest Buzz Kill: US State Department for canceling Andrew W.K.’s diplomatic mission to the Middle East. Will there ever be peace, parties?

The Most Unappreciated Man in Music Second Only to Jimmy Fallon’s Music Booker: Zane Lowe

Best Video of a Rapper Riding the Subway: Jay-Z

The one R&B singer who doesn’t want to remember 2012: Omarion

Worst Song Of The Year by virtue that it was recorded by the The Worst Person Of The Year: Chris Brown’s “Don’t Judge Me”

Best new song connection that Jeremy D. Larson made: Alabama’s “I’m In A Hurry (And Don’t Know Why)” sounds like Frightened Rabbit’s “In Living Colour”

Song that could go on forever if we had our druthers: Mind Spiders’ “Wait for Us”

Best Quiz: Who said it: James Joyce or Kool Keith?

If you wish pop songs were drone songs, then you should have definitely listened to: Now That’s What I Call Drone! Vol 1

What happened to DONDA? No idea.

Last Call with Carson Daly… is still on television.

The Most Annoying Part of This Job: Rappers who drop music after 5:00 p.m.

Luckiest Guy of the Year: Nelly

Biggest Lesson of 2012: Never ever ever drive through Sierra Blanca, TX

Best Eff You to Big Business: The Black Keys vs. Pizza Hut and Home Depot

Best Repurposing of a Whiskey Barrel by… Justin Vernon

Best Use of Flash Certification: Atoms for Peace’s Easter Egg

Best Thing To Happen To Croatia Since Reign of Tomislav: Ultra Music Festival

Most Expensive Box Set… Ever: The Residents’ $10,000 fridge thing