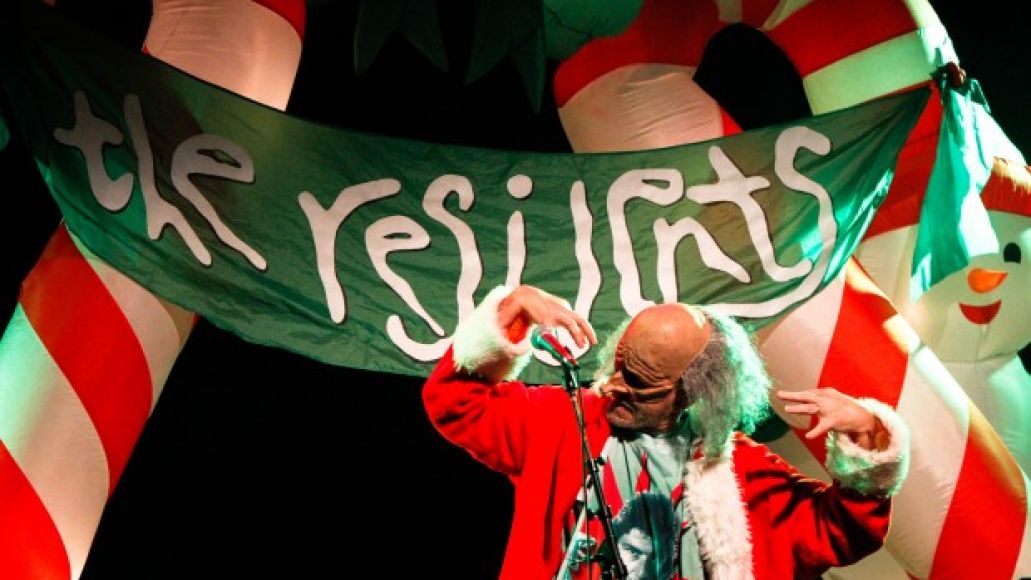 The spectacle could have been enough. With a four-decade history of performing weird for weird’s sake, The Residents could have packed Lincoln Hall with their legacy alone. But the band and art collective, now a trio, honored their own history with a performance that reached far and beyond the lo-fi recordings of their extensive catalog. For their 40th anniversary tour, The Residents prove that being more than just a band is no excuse not to launch your sound skyward.

Eschewing their trademark eyeball masks and tuxes, The Residents opted for a jumbled Christmas theme. Inflatable holiday lawn decor suspended a banner bearing their logo above the stage, while the group’s lead singer emerged in a drunk off-duty mall Santa getup. They’re wearing names now, too: the singer calls himself “Randy”, while the instrumentalists (in matching cyberpunk masks and fake dreadlocks) go by “Chuck” and “Bob”. The old man names, which as far as we know are as fake as Randy’s old man mask, served the vocalist’s senile persona nicely. Both full-blown dick jokes and sincere retrospective peppered the banter between songs, as well as a running gag about Randy’s beloved cat Maurice. It takes a special kind of presence to go from drawing a double-ended dildo from your Santa pants to waxing nostalgic about a long-dead collaborator, but somehow the Residents pulled off the switch. 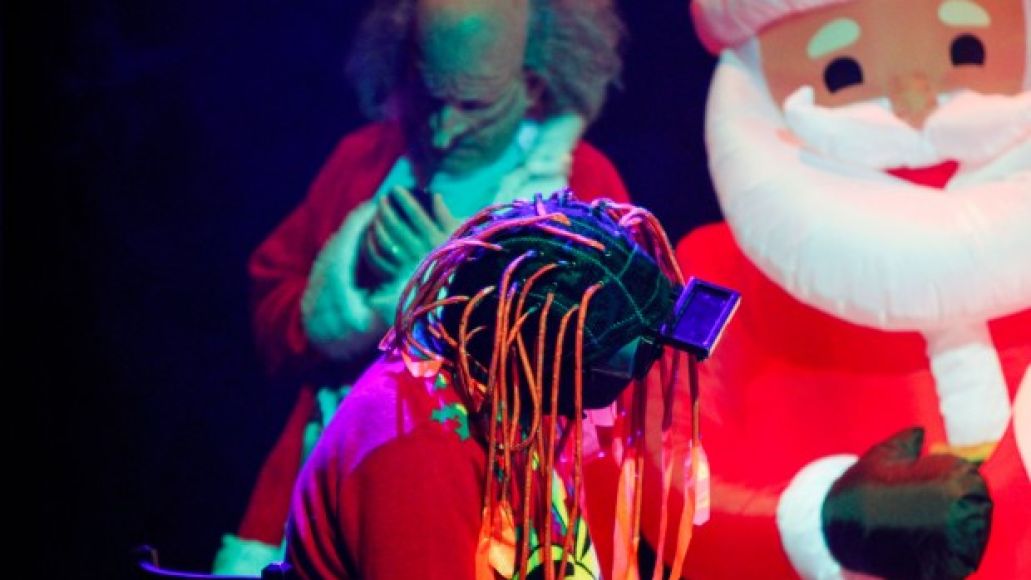 While they’ve performed both with a full band and pre-recorded backing tracks in tours throughout the years, the Residents now embrace 21st-century technology for a hybrid setup. The guitar, laptop, and voice trio might be an all-too familiar sight in 2013, but no one wields the setup with as much guts as these three. There’s something surreal about watching Chuck play an iPad and a Macbook onstage, but just because the Residents have adopted the same rig as teen bedroom producers around the country doesn’t mean they’ve sacrificed a lick of their sound. This is the same collective that pioneered the short-lived phenomenon of interactive CD-ROM music releases, after all. Technology has always been a friend to the group, a channel for experimentation, a way to be more than musicians.

Seated across from Chuck’s Apple rig, Bob proved that guitar virtuosity can still exist as part of avant-garde music. The range and power of his tone elevated the band’s sound from synth dabbling to something wild and howling, an acid-soaked expedition into the Residents’ back catalog. Randy, meanwhile, fronted with a vocal performance far more gruff and savage than anything the group has laid down to tape. 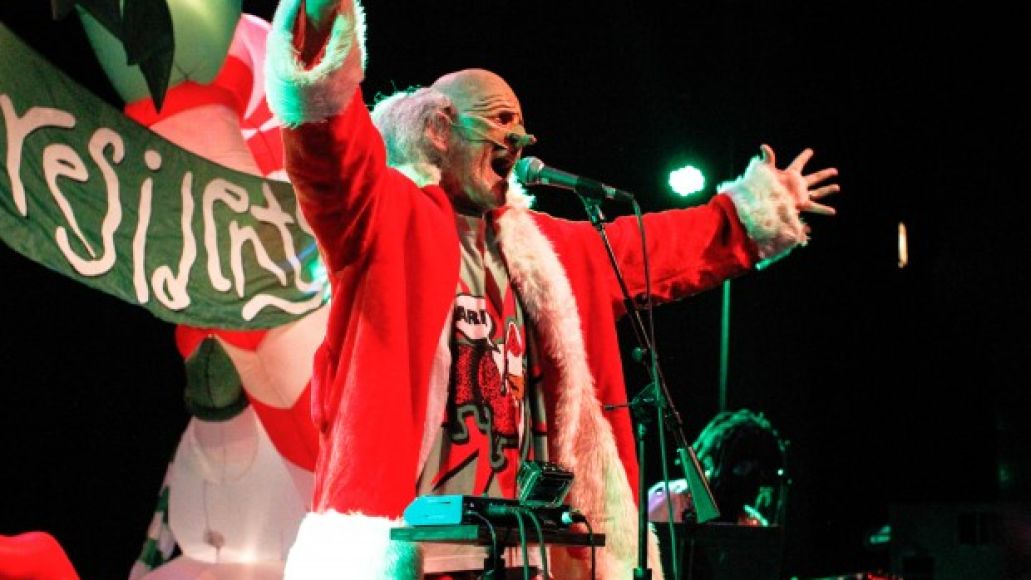 It wouldn’t surprise me if most of the polite and amused crowd was, like me, experiencing the Residents in the flesh for the first time. But even the group’s devotees, who shouted along with key points in Randy’s stories, seemed to be witnessing something they’d never seen before. The songs may have been old, dragged up from various points across the band’s history, but each of them writhed and bled like something dreamed up today in a fevered basement practice space. The Residents still break ground in 2013. They return to their own legacy and flood it with a madness that doesn’t seem to fade. “We’d die before our day ended,” shouted Randy, recalling the thrill of the group’s rise to notoriety. “We still will.” 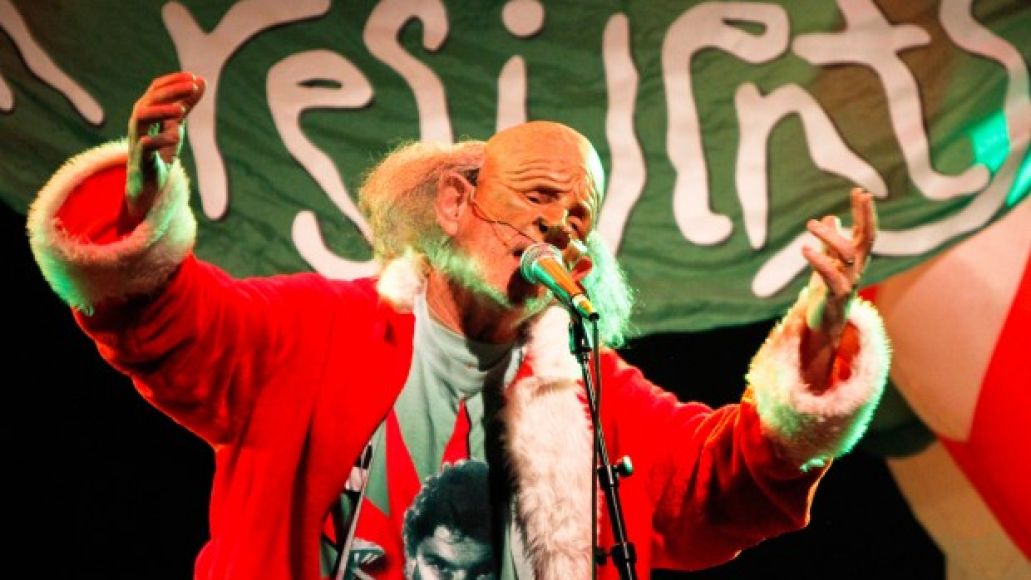 At the show’s final moments, when the band finally stood silent around the eyeball-topped Christmas tree that swelled to the ceiling, a sense of profound reverence filled the space. We weren’t just witness to a gaggle of weirdos making noise for fun. We were watching three real artists who were as much in awe of their own career as anyone else in the room. It was Christmas, and everyone was thankful.

Setlist:
Picnic in the Jungle
Baby Sister
Give It to Someone Else
Jello Jack: The Boneless Boy
The Confused Transsexual
Teddy
The Monkey Man
Struggle
The Man in the Dark Sedan
Hanging By His Hair
Bathsheba Bathes
Honey Bear
The Black Behind
Marching to the Sea
Encore:
Santa Dog
Dead Wood