When Dan Aykroyd reprised his classic role as the bumbling Czech Festrunk brother on a recent episode of Saturday Night Live, he said something classic toward the oblivious slow jam duo played by Justin Timberlake and Andy Samberg: “I thought you guys were black.”

The joke cuts deep for Justin Timberlake, who spent the better part of his career swatting accusations of pretending to “be black” – the criticism didn’t relent until he pursued acting. After *NSYNC, Timberlake positioned himself as an R&B artist, with his 2002 solo debut Justified produced and co-written by The Neptunes and Timbaland. The boy-band veteran pushed enough albums to maintain his celeb status, but the perception was that Timberlake was inauthentic, which is to say, the antithesis of R&B. He was the white guy with cornrows. Sound familiar, Macklemore?

Comedy gave Timberlake a way to diffuse the negativity, because by inviting the world to laugh at him, he gambled his chance to be taken seriously. The plan worked without a hitch. Whether gyrating next to Samberg with his “Dick In A Box” or rapping alongside Late Night host Jimmy Fallon for a “History of Rap” sequence, it’s the same falsetto and dance moves as the real Justin Timberlake. He even wears a suit and tie. For that reason, the success of The 20/20 Experience has a lot to do with Lorne Michaels.

Suddenly, Timberlake is a star to champion. The curly Mouseketeer is transformed into a suave Mad Man and there has been nary a one-liner about it. Like a certain martini-swilling exec, he’s just as uncompromising on 20/20, with songs that run a cool eight minutes long, stacked with every Afrobeat musician he could find on “Let The Groove In”, a title that doubles as the album’s raison d’etre.

20/20 succeeds because it’s groove-based, which is to say, it’s neither pop-based nor logic-based. The excellent second single, “Mirrors”, is a lonely-at-the-top tale that borrows power chords from Sophie B. Hawkins’ “As I Lay Me Down”. Elsewhere, Timberlake piles all the Stylistics into his “Spaceship Coupe”, the melody of which is straight up “You Are Everything”. But instead of catching falling stars, Timberlake makes love on the moon. That’s a mark of maturity since the randy days of “If you’re in the mood to take a ride / strap on a suit and get inside” (“Space Cowboy”).

On the other hand, 20/20’s two best songs – “Don’t Hold The Wall” and “Tunnel Vision” – sound like *NSYNC’s strongest days. The percussive “Wall” is a rapid girlfriend-in-the-club confrontation a la “It Makes Me Ill” from 2000’s No Strings Attached. It’s rife with intricate Eastern influences, but no amount of production work buries the tact of a child star (“I heard your girlfriend tell you, you could do better / Well I’m the best ever”). “Tunnel Vision” takes the rhythm of “Wall” down a dark alley, where Timberlake attacks in his lower register, which fans out in an exciting upward arpeggio. Timbaland-stamped drums crash around Timberlake, who parallels his emotional state with a digital camera with a broken zoom function, as only a true artist does.

Timberlake always sounds more appealing when he’s in digital-get-down mode (“Rock Your Body”, “SexyBack”) as opposed to masquerading as some ’70s soothsayer like Barry White, which he attempts on the orchestra-led “Pusher Love Girl” (“My hydroponic, candy jellybean”) and on “Strawberry Bubblegum”, which lunges for Steely Dan innuendo with some fancy-pants chord inversions. Both songs are infectious, although the sex-as-candy metaphors are unappetizing. Sweetness is his weakness, we get it. But when things aren’t so saccharine (“Cry Me A River,” “What Goes Around … Comes Around”),  Timberlake smacks his gum loudest.

On “That Girl”, Timberlake pares a funky guitar solo with Temptations-style fanfare as “JT and the Tennessee Kids”. It’s a far more entertaining suit-and-tie number than “Suit & Tie”. When Timberlake sings about love “swingin’ in the air tonight”, he sounds out of touch, like a Stepford Housewife or Johnny Mathis. There is a plastic eeriness in the song that is contextualized by the sterility of wearing black and white.

In a brief interlude, Jay-Z raps: “This is truffle season / time for tuxedos for no reason.” Jay’s detachment alone indicates this is no “Big Pimpin’ 2”. The opulence of “Suit & Tie” is oppressive; Timberlake is jockeyed around the time and key shifts and scrambles between mantric monotone and squeaky-clean falsetto. Beyond the brass instrumentation and sleek branding, the implicit strictures of  ”Suit & Tie” make it a truly authentic moment. 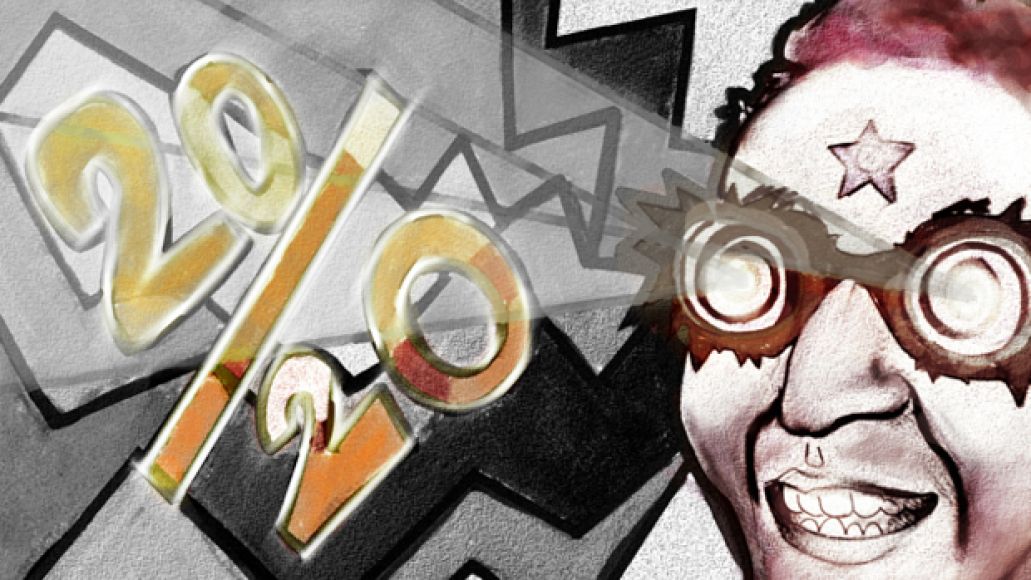