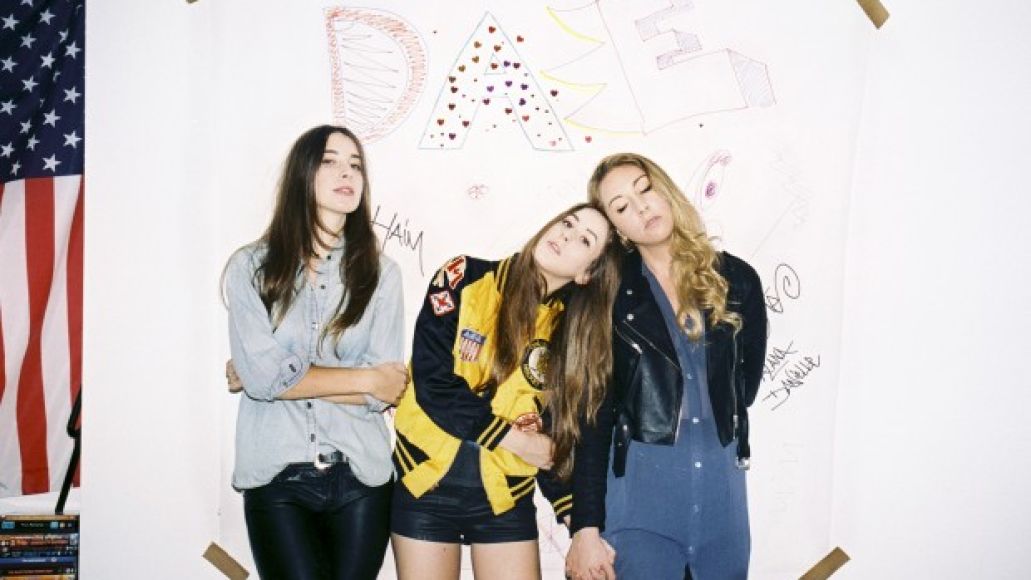 Este, Danielle, and Alana Haim are well-versed in the TRL traditions of pop:  the synchronized dance moves, the windblown hair. They even filmed their video for “Falling” in the same location as Destiny’s Child’s “Survivor”.  But unlike the lacquered groups of the late ’90s, Haim’s aplomb is bolstered by actual musicianship. After five years kicking around the local L.A. scene, the sisters are charming major music biz institutions without tarnishing their indie street credibility – a dual task that raises the bar for pop artists around the world. Though, it would be no small task for any artist to clear Haim’s bar right now.

In February, Haim opened for Mumford and Sons at the Barclay’s Center in Brooklyn; one month after Jay-Z, and two months after The Rolling Stones. Within that time, Haim scooped up the BBC’s Sound of 2013 Award (former winners include Adele and 50 Cent). Their 2012 Forever EP made a few powerful ripples. It reached producer James Ford (Arctic Monkeys, Simian Mobile Disco) who quickly signed on to work on the band’s forthcoming Falling EP along with producer Ariel Rechtshaid (Vampire Weekend, Major Lazer). According to Este Haim, the new EP will be percussive-driven “because that’s just the name of the game with us” and is seasoned with a heavy rotation of Michael Jackson, Talking Heads, and Tom Tom Club tunes.

Este is loquacious yet laid back as she reminisces about strumming Lauryn Hill covers with Scarlett Johannson at “the dude from TV on the Radio’s house.” Cooped up for the day in her Los Angeles home, the eldest Haim had just undergone emergency oral surgery to remove her wisdom teeth. She swore she wasn’t on Vicodin, adding that her life as a diabetic, a vegan, and a touring musician had made her pain threshold pretty high. “The drug dealer in my sister [Danielle] was like ‘fill the prescription and sell that shit on the Internet’ and I’m like, ‘This is where the 20-something year old mind is at these days.’”

In fact, Haim the band owes its existence to Danielle’s madcap mind. In 2007, Danielle resisted the migration of her peers to elite universities of the east coast, feeling her natural progression was to pursue music in L.A., a path legendary for its own pitfalls. So her older and younger sisters, Este and Alana, respectively, casually intervened — as only sisters do.

The Haim girls were essentially born into a band. All three began life learning to play the trapset and sing Billy Joel songs — two subjects overlooked by elementary school curricula. Este and Danielle became members of the Nickelodeon-friendly teen group Valli Girls (which Este fondly remembers as the time she rocked a bleach blonde mullet and “had no boyfriend for four years”). In high school, the sisters circulated the rite-of-passage garage band circuit, each as the token female. “There’s always this ego when you’re in a band with dudes, like ‘Oh, the chick thinks she has an opinion,’” Este said. Danielle and Alana agreed. It took them years to acknowledge that the minority left them feeling voiceless and disposable. 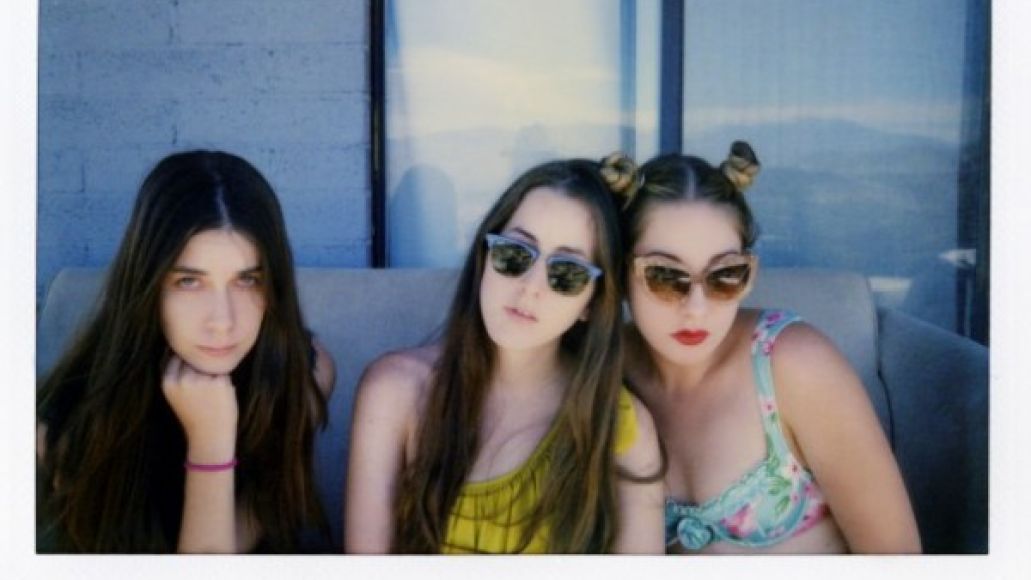 On the cusp of Danielle’s high school graduation, a “not very good song” was born in a half an hour in the Haim family living room. “But it was a song. It had a verse, a chorus, and a bridge.” The songwriting session also incurred an impromptu occasion to share the kind of life experiences one neglects to share with family. The therapeutic and creative fulfillment was like catnip for the artistic trio. A couple of months and half a dozen songs later, “we were like, ‘What the fuck do we do now?’” They played two gigs. The first, on 7/7/07 (the day of Danielle’s graduation), was a ravenous, sold-out success. The second was a downer. “Two people showed up: Danielle’s boyfriend and my best friend,” Este said.

They kept playing, they begged to open for friends, they saved their pennies for recording time without knowing the first thing about recording (“I had no idea what an engineer did,” admitted Este), and they were met by setbacks for the better part of four years. Their only solution was: “We’ll just play more shows.” In addition to their miserable luck in the recording studio, the sisters were apart most of the time. Este was enrolled in UCLA’s Herb Alpert School of Music for a degree in ethnomusicology. Alana, known as “baby Haim,” was still in high school. Meanwhile, Danielle was learning how to be aimless. The middle Haim was recruited to tour with Jenny Lewis’ band and eventually turned more heads, including the head of Strokes’ lead singer Julian Casablancas. The feedback put Danielle on a relentless touring schedule. It wasn’t until 2012, when Este and Alana graduated and Danielle was back home that they could reconvene. Este said, “We’d been in the band for six years at that point. When we saw the opportunity, we were like, ‘if we don’t do this now, it will never happen.’”

“When we were toddlers, I would cut Danielle’s hair. I was only like four or five, but she will never forgive me. I remember my Mom took her to Supercuts and they gave her the ugliest bowl haircut,” Este explained on the dynamic of the Haim household. By high school, Este enlisted Danielle as her social second-in-command. She took her middle school sister to high school parties, and once their parents allowed, to  hear L.A. bands she was “obsessed with” like Say Anything and Phantom Planet. “When she [Danielle] was with me, I felt like I was in a gang. We just had the school on lock,” Este said, quickly adding, “All my guy friends had crushes on Danielle, which was weird, creepy, and annoying.” Thankfully, Este was past the point of doling out vengeful haircuts.

“One day my theory professor played a clip of the Johnny Carson Show where the musical guests were these middle-aged ladies singing Bulgarian folk music. I didn’t know what they were saying, but I remember feeling such a deep connection. I just thought: I need to learn how to do that.” The next day, she enrolled in the Bulgarian choir.

Este was also part of UCLA’s Music of Brazil Ensemble, where “everyone is either playing a drum or dancing” (Haim fans: sound familiar?) Este spent three years and by the end, could play every Afro-Brazilian percussion instrument in the group. She learned other exotic instruments like tabla, gamelan, and sitar, but they lacked a personal connection. For Este, musical security — that foggy feeling, those good vibrations — is synonymous with her family. Her father is both Bulgarian and a percussionist, and Este was raised on as much Latin music as she was Fleetwood Mac.

Fortunately for Este and her sisters, the Haim circle of security is an encompassing one. “When we did the ‘Forever’ video, we weren’t signed yet, so we went to our friend Austin who had done some videos for Dawes, and were like ‘Yo bro, we have no dinero. Can you help us?’” When it was completed, Haim’s amateur effort looked polished. The girls move, jump, and shimmy in unison in the street, via moped, and in their friend’s mom’s Culver City hair salon — a nod to Destiny’s Child’s “Bills Bills Bills” video (Este confirmed). The video cost them about $300 total.

Their videos bask in how badass it is to have sisters, girlfriends, sister-friends, and sisters and friends as your very own backup dancers:  a worldview espoused by the Mmmbop generation and lost ther after. The music video democracy that MTV ran turned music videos into weekly events. Haim developed that  infectiousness through DIY means in their look and in their music. Songs like “Send Me Down” and “Save Me” are full of feathery vocal modulation, call-and-response, and “Say My Name”-worthy mantras. Their live shows are full of the spark and sprite of those older groups — the professionalism, too. 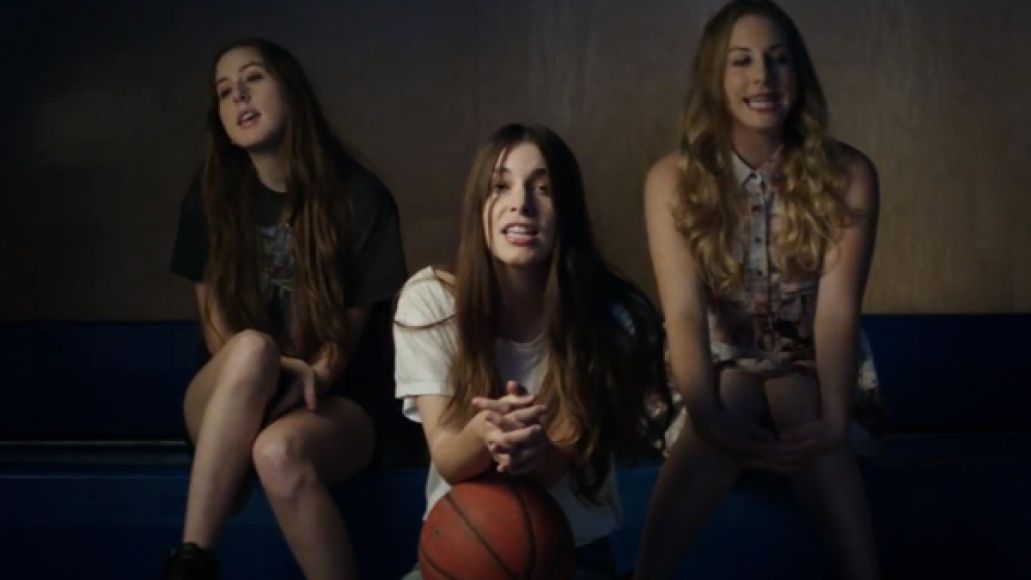 But being professional doesn’t preclude being family and Haim found a Brady-esque match when they went on tour with the Mumfords this past year. “We don’t have brothers, so we decided they [Mumford and Sons] are our brothers. And they treat us like sisters.” Ben Lovett told Alana Haim purple lipstick was not her color (“Take that shit off you look like you’re in your 40s”). Este Haim gave Country Winston a fake lottery ticket. Apparently, when he thought he’d won $25,000, he immediately handed the winning ticket to Danielle Haim for her birthday. “We closed every show with a cover, which was like our childhood,” Este said.

This summer, the Haim family will grow ever-larger; festivals like Bonnaroo, Governors Ball, and a big handful of European fests will all bask in the sororal pop of Haim. As for Este in particular? Well, she hinted that Tom Petty aught to amp-up his security detail, as should Kanye West and Mister Lies. She’s psyched to catch up with old friends like A$AP Rocky, but is holding out for plenty of new ones (“People are always like, ‘Este, can you play drums on this?’ And I’m like, ‘Fuck yeah!’”). So let 2013 be remembered as the year Big Star’s prophecy came true: Haim, the three sister lovers, have finally arrived.