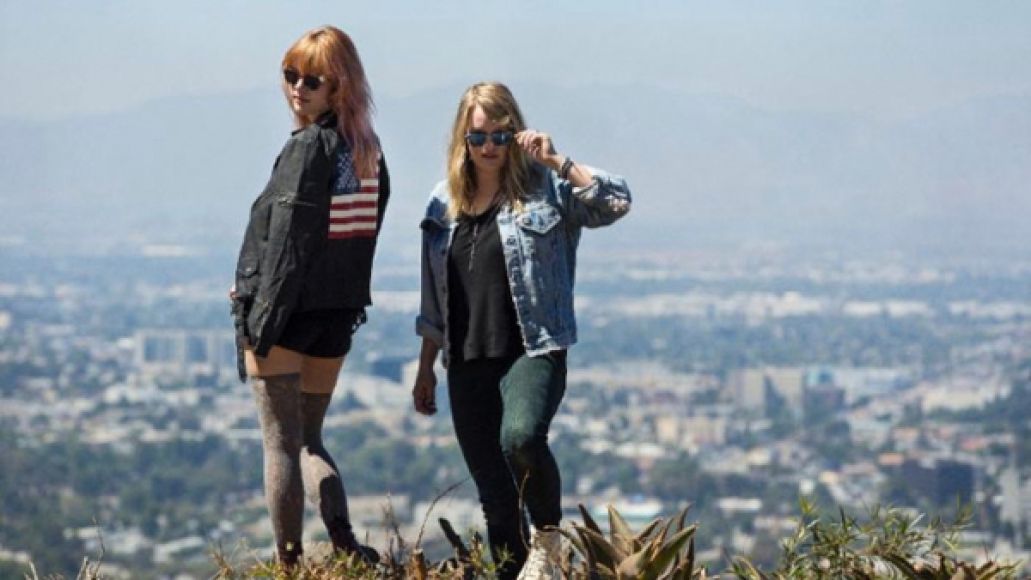 The chilly warmth on our backs that comes with early April means the summer is just within reach. Yet LA-bred punk duo Bleached, comprised of sisters Jessica and Jennifer Clavin, write sun-drenched love songs that bleed reeling rock and roll year-round. Named for consistently bleaching their jean jackets and blonde hair, the duo just released their highly anticipated debut full-length, Ride Your Heart, on Dead Oceans. With the sweetness of The Shangri-Las’ ’60s pop, infused with a certain Rolling Stones ramble, Ride Your Heart listens like a poignant sundown drive.

We caught up with the girls after their run of SXSW shows to chat about architecture, performing at pantsless house parties, and being extras in zombie movies.

I saw your photo diary for SXSW, and it looked like you guys had an awesome time. What photos didn’t make the cut?

Jessie: I feel that we used most of what we have. What do you think?

Jen: We were so busy that I wasn’t even focused on taking pictures. The day we turned it in, we just gave them what we had. I told the guy, though, you can leave out the one of the security guard, because I didn’t know if that was bad to put it in there because we were kind of fighting with him. [Laughs.]

Yeah, what happened with that exactly?

Jen: Well, we were there for Black Lips; then we really wanted to see Kendrick Lamar. We ended up leaving for a second, so then we came back, and they told us we couldn’t go back in. And we said, “Oh, we were already here, and we’re friends with Black Lips; they put us on their guest list.” And they refused to let us in. We said we’d stay there until they let us in. They told us, “You should just go to the Burger show.” So we thought, “You know exactly what band we’re in if you’re telling us that.” And then I ended up spitting on one of the security guards and running away.

Man. What’s the best act you saw at SXSW?

The best band I saw was probably Trash Talk. They’re very entertaining. We asked to play this last-minute house party, and that was so fun. Basically, I convinced all these boys to take their pants off. And then there were a bunch of boys crowd surfing without pants on. And then my friend threw his skateboard into a fire pit, and fireworks went off when we were playing.

That sounds wild. Where was it?

It was right across from Scoot Inn. I think they ended up getting fined for that house party — The Orwells or something. It was so awesome. I wish there were more photos, though.

How did you convince an entire crowd to take their pants off?

I don’t even know. I think everyone was just ready to party at the end of the day. It was just all guys dancing around; it was great.

That’s rad. Bleached’s sounds are certainly well-suited for those spontaneous occurrences, too. 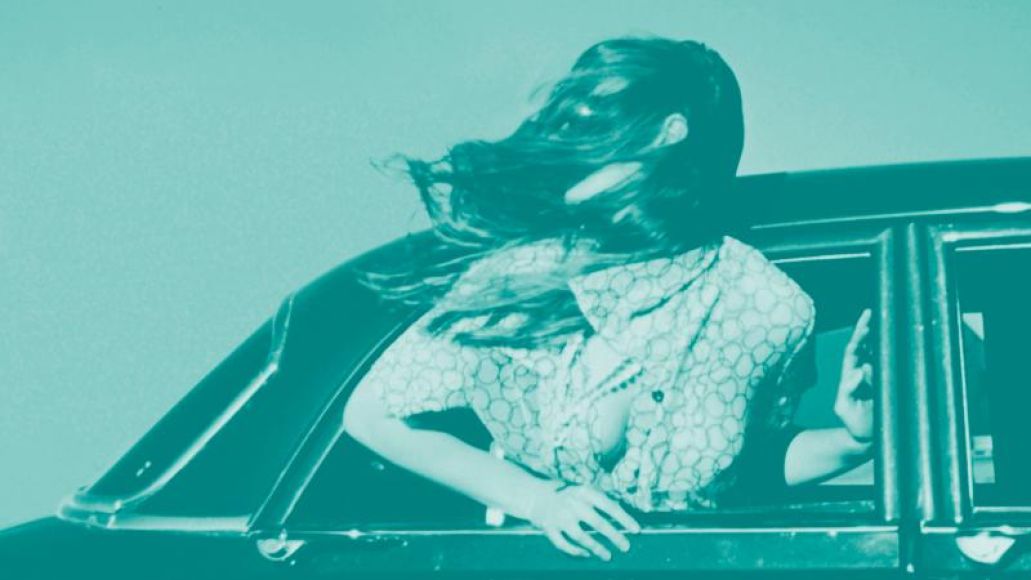 Your debut album just dropped. But until now you guys have been fairly selective with your releases, despite building up a presence for the past two years.

Basically what happened is that we started recording these 7”s. When we put out the first and second one, Jess and I weren’t even sure how serious we wanted to be. We had tried a band together to see what kind of music we could write. We didn’t want to do as much punk anymore. We wanted to do more rock and roll. We weren’t focused on live shows either. But then the second 7” came out, and it got… a lot of attention, with the song “Think of You”. We didn’t even think people would like it that much.

I was also touring with this other band in New York. After the Think of You 7” came out, we thought, “Okay, let’s get serious.” So then we started touring a bunch. And then I feel like we ran out of time to record anything. After, I think, a year and a half of touring so much, we needed to figure out how we were going to record this. We also had so many demos. In my mind, I thought we were going to do one more 7” before the release, but then we didn’t. I think putting those out is cool, because in the beginning you don’t even know what your sound is, and we were experimenting with songs. If you listen to the first 7”, to the full-length, the songs have grown so much.

Touring first, then releasing 7”s is an organic way to do it.

Yeah. We recorded it on our friend’s cassette 8-track, then in a studio. And then the third we did the same thing; then the fourth we went into a nicer studio, spent almost three months on the whole project. And got to experiment, recording different ways, trying different instruments we’d never recorded with before. It went from punk to moving up to, well, still punk, but influenced [by] pop. Still rock and roll, though.

The pop and rock elements are definitely present. In listening to some of your 7”s, thematically they hover around wanderlust. What kind of landscapes do you have in mind when you write songs?

For some reason I get very inspired to write depressing love songs. The only time I can usually write is when I’m going through some weird times. It’s also hard being in a relationship when you’re in a band. You want to be in one, but it’s almost impossible to be on the road. So I get inspired to write during those times. Also my sign is Scorpio, and my horoscope says that we’re really emotionally attached.

The real humanity comes through when you’re down.

Yeah. I feel like people connect with that well, too, because they’ve all been through those types of experiences. In the last band I was in, I feel like I couldn’t bring that type of stuff up because I was embarrassed. But I always wanted to. With this, I thought, “Fuck it, I’ll write what I want to write.” Some of my favorite bands do that, too. Like, when I listen to The Cure, I think, “These lyrics are so good,” so I’m kind of inspired by their writing, too.

With your old band [Mika Miko], how was the songwriting process different? You mentioned you weren’t really able to expand on these emotive love songs then.

With Mika Miko I guess some of the lyrics were like that, but I’d write them in such a vague way that you wouldn’t even know. If you’re listening to the song, you’d maybe take it that way, but maybe not. There was another singer, so we’d have to write lyrics together. We were also younger, so it was a lot more fun. One song was about a sleepover; another was about being extras in a zombie movie.

We actually didn’t even end up doing it! I don’t remember why. I think we woke up too late. It’s really easy to do that living in LA, to be an extra in something. But it’s shit pay and really annoying, because you’re just sitting outside for nine hours. One time the thing was to be zombies in a show, but we got the call when we were trying to write a new song, so we thought, “Okay, let’s write about this.” Don’t remember why we didn’t go, though.

At least you got a song out of the experience.

What is the last record you heard that completely floored you?

I don’t really like current bands as much as old bands. So when I heard Veronica Falls’ first full-length, I thought, “This is so good.” I listened to it on repeat for so long. Then we ended up going on tour with them after that, so it was cool.

What would you be doing if you weren’t making music?

I was going to school for fashion for a second, so I would somehow be doing fashion designing. I remembered recently when I was a kid that I wanted to be an architect, so I keep thinking about that lately. 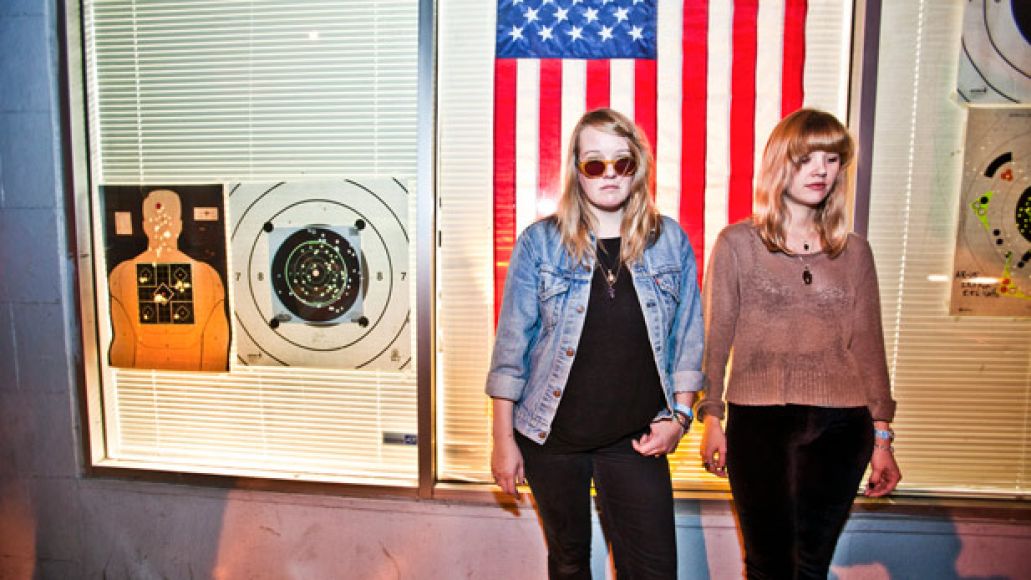 It seems like it’d be the coolest profession ever. LA has such beautiful modernist architecture, too — like all the Frank Lloyd Wright properties, Stahl House.

Yeah. There’s all the Neutra homes in Silverlake and Echo Park areas, too. They’re so awesome. You wouldn’t even know they were there unless you live in the area or know that they’re there. They’re so cool-looking, though.

If you did architecture, would you want to build houses?

Yeah. I want to figure out interesting ways to fit things together. It’s cool. You have this certain area that you have to fill all this stuff in, but you can’t make it too cluttered. I was really into math growing up, so it’s figuring out where to put things in places. Have you seen The Hobbit?

No, shamefully I haven’t.

I watched half of it the other day and didn’t finish it. But the houses he lives in, I thought, “I need to live somewhere like that someday.” It’s a little hobbit house, but it’s so cool.

How does it compare to Bilbo’s house in Lord of the Rings?

I never saw it! But I figure it might be the same type of thing.

Awesome. I need to check it out — I’m terrible about seeing new movies. Much better about new music.

I just saw Spring Breakers, and that was nuts.

Nuts in a good way?

I didn’t really know what to expect because it’s called Spring Breakers. I didn’t know if it was going to be about partying or what. But it’s super dark, and really good. You almost don’t know how you feel about it when you leave because it’s so intense. But you can’t stop thinking about it either.

Rad. Tough question, I know, but would you rather have shared a bill with The Ronettes or The Shangri-Las?

Cool. Anything else we should know?

Well, Jessie wanted you to know if she wasn’t doing music, she’d be doing music for movies. Here she is.

Hi there. So, music scoring?

Jessie: Yeah. I feel like I wanted to be doing score music had it not been for Bleached.

Awesome. Any composers or music supervisors you look up to?

Jessie: I look up to Mark Motherbaugh a lot, because he was in an ‘80s band and is completely scoring films. When you listen to his score, you can tell there’s an eerie-ness to his choices, and the punk influence is there.

That’s right! I always forget Mark Mothersbaugh used to be in Devo.

Jessie: I know, it’s crazy. I actually have a couple of friends who have tried to get a job with him, and they all got denied because they couldn’t read music well, not strategically enough. I thought that was interesting. I don’t think he was reading or writing music when I was a kid, but he is strict about that now. I think I would be too, though.