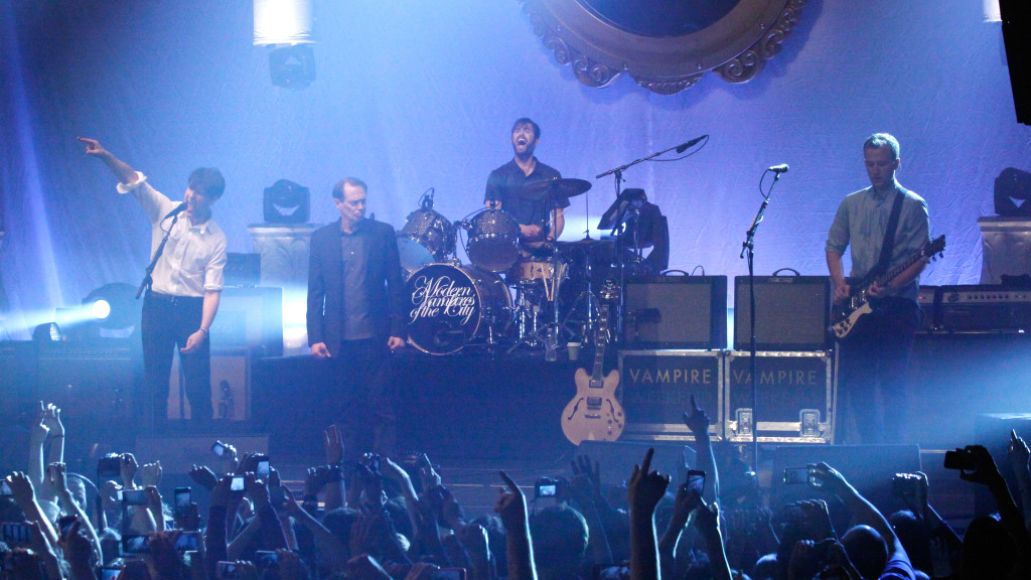 “Do you know what the YouTube link is to watch this thing?!” said the sidestage security guard last night as he checked my wristband at Roseland Ballroom. “I’m trying to tell my wife how she can watch this show,” he clarified. I suggested he tell her to “Google ‘Vampire Weekend Steve Buscemi.’” The next four minutes were filled with a step-by-step explanation of how to perform a simple Google search, until a photographer trying to walk backstage distracted the ham-handed security guard and he thanklessly hurried away.

Thankfully, me taking the time to explain the internet to this poor fellow was deemed a good deed by the powers that be, and I was subsequently awarded with a supreme accidental viewing spot. Perched on the front of the elevated sidestage next to some matronly Vampire Weekend family members and a camera man, my spot afforded an unobstructed view of the stage, close proximity for eavesdropping on text conversations between the aforementioned VW family members, and peace of mind from knowing that if things got out of hand with the throng below me, I at least wouldn’t be crushed to death by the swarming youth hopped up on horchata. 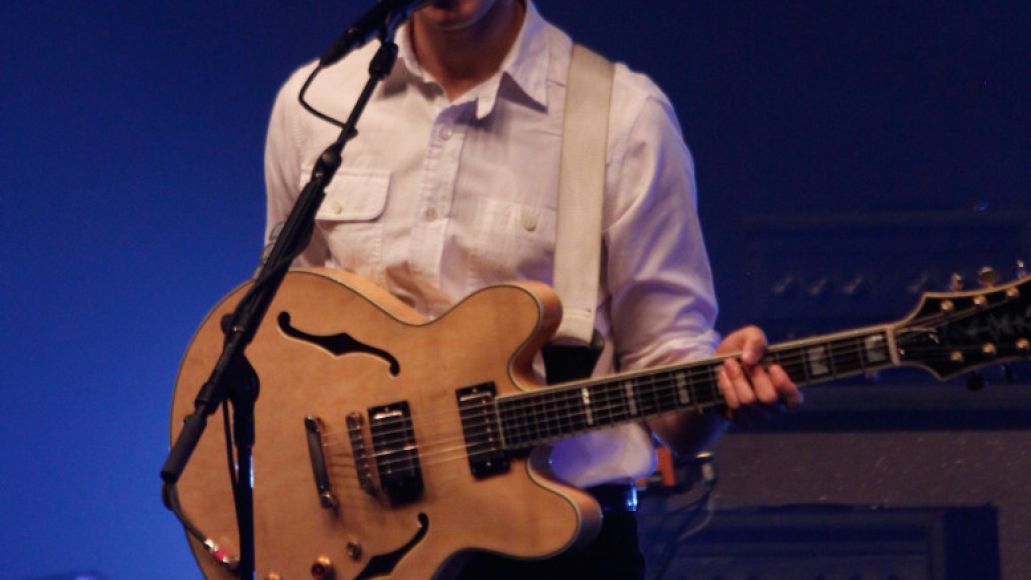 A blasting royal horn intro announced the band members as they strolled onstage to launch into show opener “Cousins”. “White Sky” followed, exhibiting bassist Chris Baio’s fancy footwork — (he ain’t no Chachi though) — a true theme (for me) for the remainder of the show.

This song also elicited the one observed incidence of “piggyback dancing,” where a girl briefly attempted to dance while riding on the shoulders of some dude, before immediately losing her balance and slipping off back into the crowd. It was all the passion of a Taylor Swift performance, plus the energy and sweat of a punk show, minus the rawness and flying beer cans. This is about what I expected for my first Vampire Weekend show: screaming girls, frenzied students, and lots of kids adorned in American Apparel and Urban Outfitters garb. Solid renditions of “Oxford Comma” and “A-Punk” (featuring Steve Buscemi on shared vocals) satisfied the audience’s desire to hear some old favorites, but hearing the new material was an especially enticing factor in attending this show.

As one of five new songs from VW’s upcoming Modern Vampires of the City, “Step” went over especially well, as does any predictable anthemic rock song based off of “Pachelbel’s Canon” tends to do. The audience acted like they were at a Skrillex show, unanimously doing that one rhythmic finger-pointing move while lead singer Ezra Koenig looked bored to death. “Diane Young” came next — and never has there been more of a Buddy Holly rip-off — but it’s catchy nonetheless and moves more into classic rock territory than the Afrobeat of VW’s previous releases.

The Afrobeat was still there in full force, of course, especially on the nonsensical chorus of new addition, “Ya Hey”, which was somehow an audience request, initiated onstage by Buscemi in all his deadpan glory. VW really pulled out the stops on this one, including a squealing baby vocal effect (which may or may not have only been heard by me, because it isn’t present on the Vevo footage), and a misty, “spotlight only” moment on Koenig’s solitary figure as he recited a spoken interlude. This song had a profound effect on everyone in the audience, most of whom were screaming every single lyric (they did this with every song though), while reaffirming my opinion that VW should stick to cleverly singing about campus life and high-brow literary references, rather than filling their songs with bouts of meaningless tribal chanting (if one could even call it that). 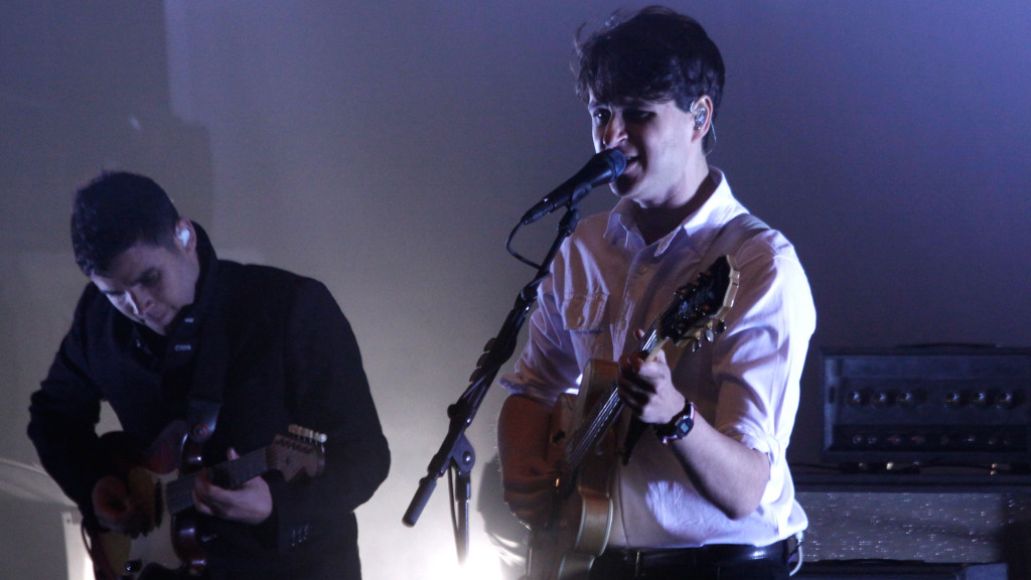 Overall though, the night was extremely entertaining. By the time “Walcott” was being pumped out to the spirited crowd, I had spotted a man in flare orange wind pants attempting (and mercilessly failing) to crowd surf, so it seemed like a great time to track down Kate Moennig, Jude Law, Jonah Hill, or Zach Galifianakis, all of whom were in attendance. But instead, I found myself wondering what Buscemi was up to, and why there weren’t any screens at all in Roseland to see his director’s take of the concert, which was the entire point to begin with. In fact, it wasn’t until late last night on Vampire Weekend’s Vevo channel that I got to see any of the entertaining non-crowd-cam footage — (including the band’s pre-encore break for tea time and a game of five-card stud with Buscemi and Fred Armisen, disguised as a bleached-blonde Brit) — and despite how it was globally streaming live. (Who wants to bet that that man’s wife never got to see any of last night’s performance?)

I’m not sure if it’s a good sign or a bad sign that I found myself wishing I could also use the interactive digital platform during the show, even though most people would arguably prefer to witness the real thing — but the point is, AmEx’s attempt to use digital and social media to connect an online audience to a live show was innovative and unexpectedly successful. While a little more Buscemi would’ve turned my frown upside down, the Vampire Weekend boys gave a respectable performance as part of a concert series that would definitely be worth attending again — even from the comfort of my own smart phone.