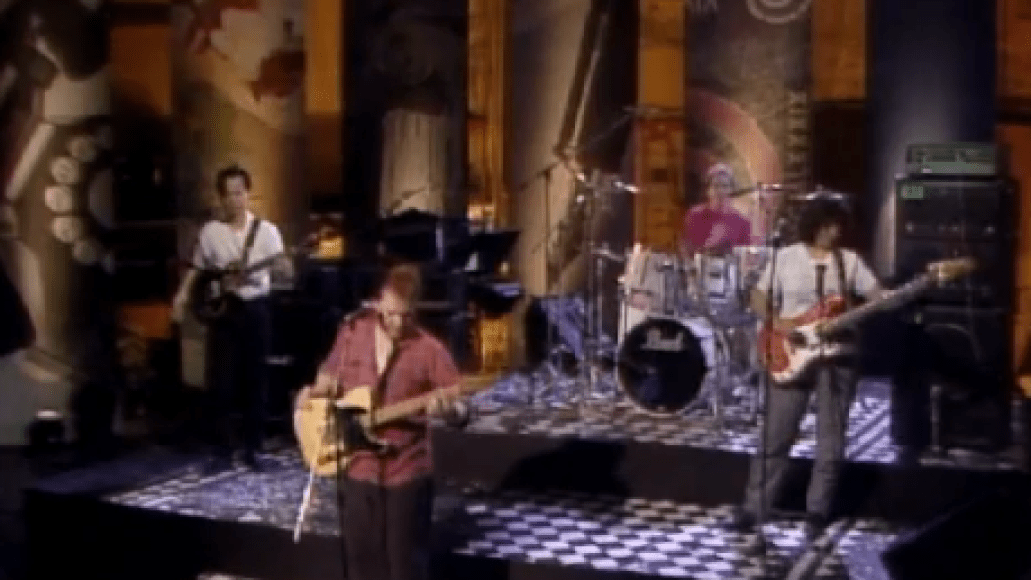 Welcome to a new feature entitled Video Rewind. Every Friday, a CoS staffer shares a beloved video clip dug up from the depths of the Internet. Consider it a quick jaunt down memory lane via moving pictures.

At 1:32 a.m., I received the most unexpected of emails: Pixies had released their first single in nine years, a little ditty entitled “Bagboy”. And, as I’m wont to do when someone talks about the Pixies, I immediately delved back into the band. (I have a similar experience with Sprite; I don’t drink it till I see someone else do so first). Among my fondest memories of Frank Black, Kim Deal, Joey Santiago, and David Lovering is their performance of the criminally underrated “Monkey Gone to Heaven” on BBC’s The Late Show way back 1989. To me, this is the Pixies at the peak of their creative process, when the foursome are, pardon the terrible metaphor, at their most crisp and refreshing.

A bit of background: Pixies landed on the show in the first year of its six-year run — which says a lot that some weirdo band was chosen as the American ambassador to the UK’s progressive adult audience and TV-watching insomniacs. The band responded to the gig with their usual sense of bizarreness; Black looks like he’s about 15 bopping around like he’s at a high school dance. And Deal looks like she’s checked out mentally or about to consume an audience member, either of which would make for great TV. But when it comes down to it, this is the quintessential version of the song: the weird pacing, the way the guitar reverberates through the empty space, the thickness of the bass, Black’s manic yelping. All of it just makes for the perfect example of how to properly do a late-night gig and make it really transcend the song itself.

So, while I’m sure I’ll enjoy the new Pixies tune at some point, I’m gonna keep drinking up this most perfect of clips for the rest of the evening. Salud.