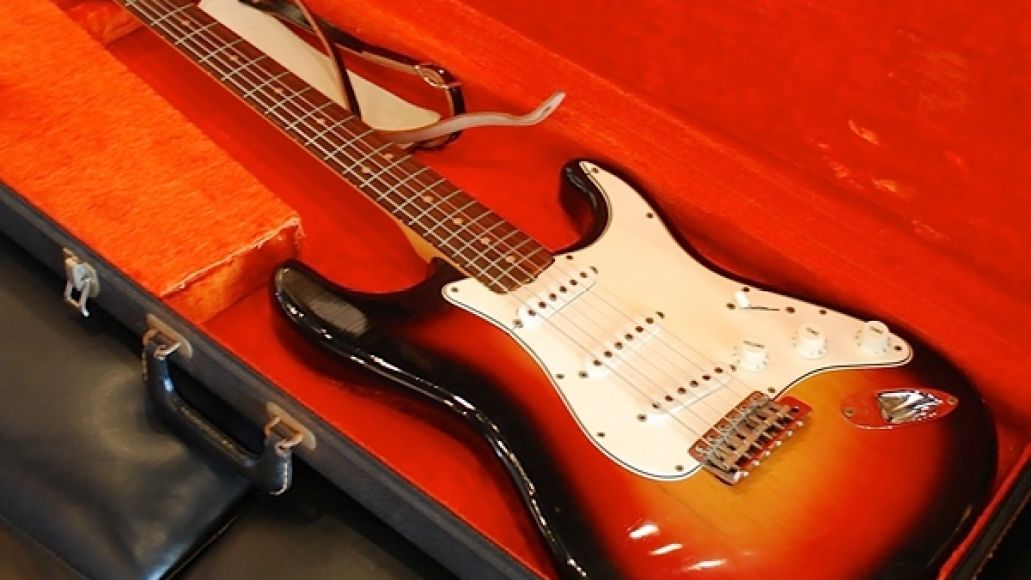 Without even the slightest bit of hyperbole, Bob Dylan going electric at the 1965 Newport Folk Festival is one of the most important moments in rock and roll history. It rewrote the very fabric of popular music as we know it and took Dylan from troubadour status to a place in the rock and roll pantheon. Now, you (and we mean those of you with thousands of dollars to blow) can own a part of history when Dylan’s fabled 1964 sunburst Fender Stratocaster hits the auction block later this year. Quick, someone buy all of our stocks or something.

Since that iconic concert, the guitar has belonged to New Jersey resident Dawn Peterson’s family, who kept the rock and roll artifact to themselves for over 50 years. But last year, Peterson went public on an episode of the PBS show History Detectives, sharing the guitar with a capital G with those who watch PBS. While the show verified its authenticity, the elusive Dylan later emerged to point out that he still owned the guitar. Fast forward to earlier this year, when Dylan and the Peterson family settled a legal dispute that would let her sell the guitar.

“One term of the agreement that I obviously can disclose is that Mr. Dylan will participate in the sale to the extent that he will be signing off on any ownership interest after the sale,” Peterson’s attorney Christopher DeFalco told Rolling Stone. “The person who buys it will receive a bill of sale that will be signed both by the Petersons and Mr. Dylan or his representatives.”

The remaining terms of the agreement are confidential, and neither party will confirm if Dylan will share in the profits. “The suit was originally a declaratory judgment for a declaration as to who was the owner of the guitar,” added DeFalco. “Then it was amended to include a claim that the value of the guitar was reduced because of the fact that those statements (where Dylan claimed to still be in possession of the original guitar).”

Asked whether this resolution meant Dylan has forfeited these claims, DeFalco said,  ”Well, you’d have to ask Mr. Dylan that. I think the evidence that we have is sufficient evidence. I believe if you’ll ask Mr. Dylan whether or not he has the guitar now, his answer would be ‘no comment.’ We’re satisfied that the guitar is the guitar, and I would think anybody who would be reasonably interested in purchasing it would draw the same conclusion.”

As if an added bonus was needed, the sale will include handwritten Dylan lyrics circa 1965. Found hidden in the guitar case, they contain fragments that later appeared in “Just Like a Woman” and the Blonde on Blonde outtake “Medicine Sunday,” an early version of “Temporary Like Achilles”. But with such a high-profile lot on her hands, Peterson is still unsure how and where the auction will go down.

“I’ve been talking to Wes Cowan, who appeared on History Detectives,” she said. “He owns an auction house. He’s giving me some contacts, but we’ll probably also call Sotheby’s and Christie’s to determine who is the best going forward. History Detectives felt it was worth $500,000. I believe it’s probably worth more than that. I doubt we’ll sell it with any sort of reserve. The lyrics are also estimated to be worth at least $50,000.”

As to how Peterson obtained this most sacred of instruments, she revealed the sorted tale on last year’s History Detectives episode. Peterson’s father, Victor Quinto, was a private pilot who worked for Bob Dylan’s manager, Albert Grossman, and Dylan simply left the guitar on the plane. “My father passed away years ago, but I’ve heard from his friends that he asked the management company what to do with it and he heard back, ‘We can always get more from Fender,'” Peterson said. “I’ve also heard that he called and asked them what to do and nobody ever responded.”

While Peterson will no doubt make bookoo bucks from the sale, she hopped that whoever buys the guitar will share it with the rest of the world. “I would feel unsafe hanging it on a wall now, after all this went on,” she added. “I would have to pay to keep it locked up, and I want somebody else to enjoy it. I’m hoping it goes to a museum so it can be shared with everybody.” Get on that, eccentric billionaires.

Below, replay that world-altering Dylan performance. Then, for more Dylan mythos, be sure to check out our recent story on his equally-historic performance from the 1964 Newport festival.