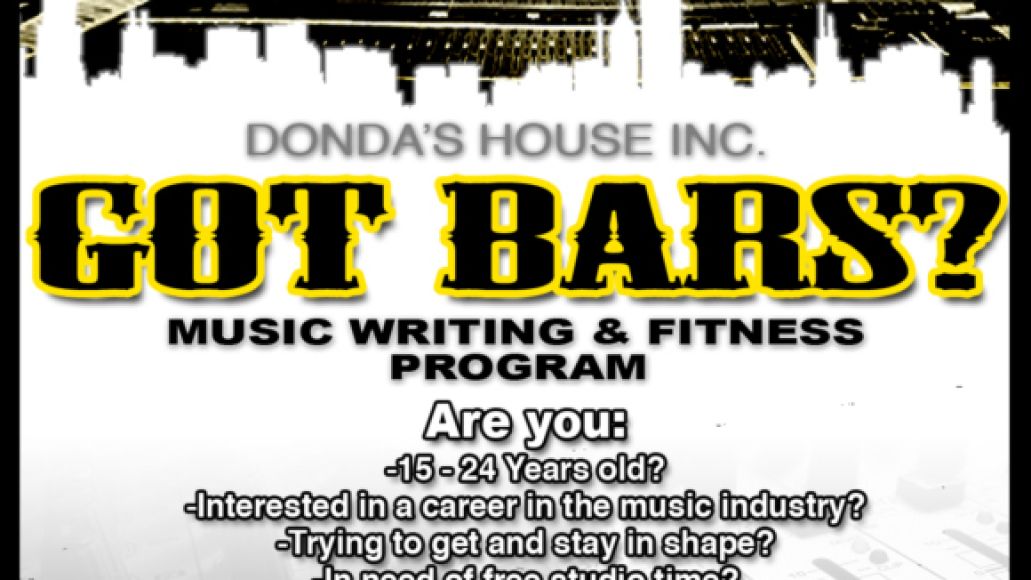 Kanye West does more with his money than purchase $91,000 shirts. Donda’s House is a nonprofit West founded to “honor the educational legacy of Dr. Donda West by implementing arts, health/wellness, and literature experiences that transform youth.” As WBEZ reports, the newly-minted charity’s first initiative will help Chicago’s at-risk youth get off the streets and into the recording booth.

Part of a partnership with St. Sabina’s Church, “Got Bars?” is aimed at students 15-24 and will teach them how to write and record music in a professional studio over the course of 10 weeks. (There’s also a component for personal nutrition and yoga helmed by an ex-football player). While Yeezy won’t be playing teacher, students will be in the capable hands of Rhymefest, Donda House’s co-founder and a contributing writer to Yeezus.

In an interview with Jet, Smith emphasized the importance of targeting the 15-24 demographic. “If you look at individuals who perpetuate violence in the city, that’s the age range.” The ultimate Goal, Smith explained, is to “give direction” to those who are “confused about where they are in life. So many people have just given up on that demographic. And I would add that Dr. Donda West was passionate about the high school dropout rate. We want to be working to help with that at the younger age of that spectrum.”

Rhymefest mentioned that those learning at the feet of the West empire won’t have to worry about following Yeezy creatively. “(Yeezus) is a fusion; you’re hearing hip hop, punk, rock and rage…a lot of different sounds. This is what we want to bring to young people at Donda’s House. We don’t want them to feel put in a musical box. Everything they make or create, from spoken word to a track, we don’t want them to think it has to sound like whatever is on the radio.”

Donda’s House is taking applications through August 2nd. Once the program is complete, an EP featuring each of the 20-30 students is expected to be released. Within the next two year’s, Donda’s House intends to expand “Bars” at a national level, emphasizing programs like dance, drama, and art.

In closing, a little inspiration for the students in the form of Kanye’s best song, “Jesus Walks”: