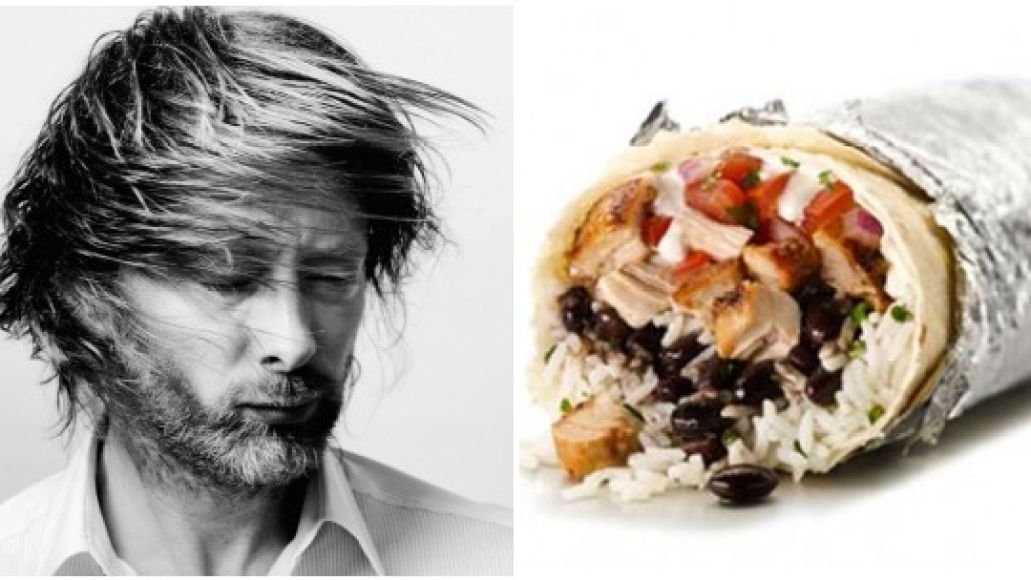 For anyone who’s ever been dining at a Chipotle and thought, “Man, a bit of Radiohead would really complement the tang of this burrito bowl”, you’ll have to keep that tiny dream packed far, far away. In an interview with The Denver Westword, Chiptole’s resident playlist designer Christopher Golub said the band’s particular sonics just don’t work within the minimalist architecture of the chain’s 1,400 restaurants. (Apologies in advance if my Stress Position piece somehow influenced their decision).

“You know that if you go into a store, you’ve got the small, hard surfaces,” Golub said. “You’ve got concrete floors, a lot of windows, hard walls and a lot of cooking gear and tile. So that doesn’t work with certain songs.” For example, that includes, as the author of the article explained, “the high, tenuous yowl of Radiohead frontman Thom Yorke wreaks havoc with the steel and concrete of a Chipotle buildout.” Kinda like how the burritos wreak havoc with your… never mind.

While Yorke and Co.’s ambient overtures will never soundtrack a meal of five sour-cream-drenched tacos, the 500-song playlist Golub’s designed features other high points, like Tom Waits’ “Jockey Full of Bourbon” and Peter Tosh’s “Coming In Hot”. The company also makes use of a little thing called “Stimulus Progression”, an old trick of radio programmers dating back to the ’40s where music played during the lunch rush has higher BPMs in order to improve productivity. That totally beats slamming 5-hour Energys in your car before stepping back into the office.

But if you’re still insistent on enjoying fast food Mexican with a side of the ‘Head, then here’s some Radiohead songs to enjoy after you grab a burrito. Just don’t chew with your mouth open or you’ll throw off the acoustics.