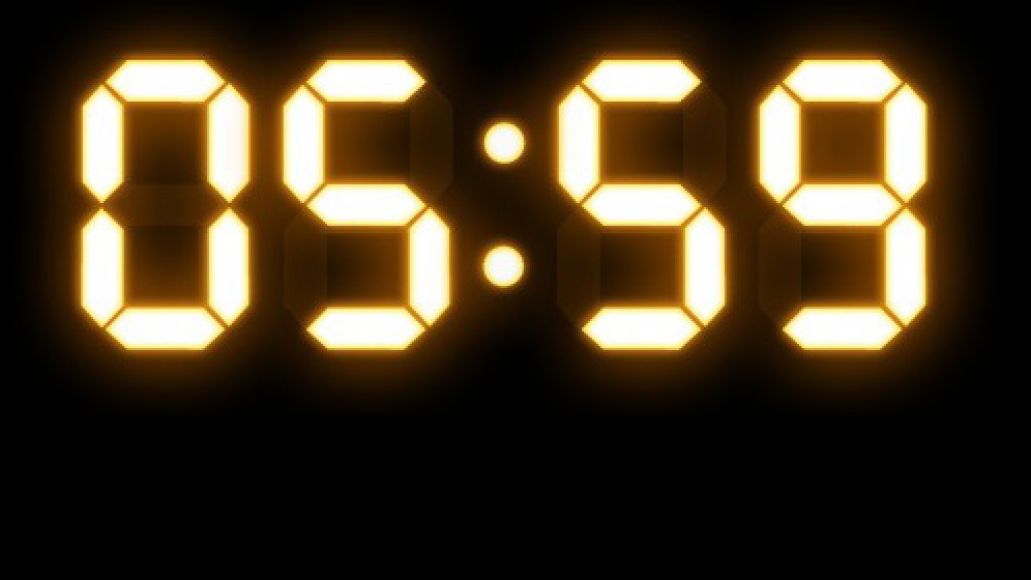 The National did it. So did Jay-Z. Now who? Not that we’re on our hands and knees sobbing and begging whatever mythical force that’s up there to deliver us another six-hour performance, but it’s fun to dream and speculate. And because it’s such an elaborate, demanding task, both on the performer and to wherever and whomever they’re playing, we thought we’d place our tongues in our cynical cheeks and get a little wise with our choices. Are any of these likely? No. Are they supposed to make sense? Lord no. But do they present a funny situation to dream up? I’ll answer that with another question: Is anyone who agrees to a six-hour performance of one song insane?

Read along, dream on, and then share your own six-hour conjuring.

U2 can control nature. Bono wants to prove it to you. He tips those stupid glasses, looks in your eyes. “To Yellowstone.” You follow, chuckling as the band surrounds Old Faithful. The Edge plugs in the amp, and feedback sizzles into the opening strains of “Elevation”. Drums, bass, those thunderous power chords, and then, with Bono’s soaring “wooooohoo!”, the geyser erupts, launching the tiny lad into the stratosphere, where he flies, so high. Though Old Faithful historically erupts every 91 minutes, it seems Bono’s taken control. And for six hours—for that is the extent of Bono’s powers—those woos send the singer pinwheeling skyward, where he bounces on a bed of gushing H2O and emphasizes every goddamn syllable of el-eh-vay-shun .–Randall Colburn

It’s the Wednesday before Thanksgiving in Chicago’s Union Station, where millions of commuters are struggling to get home. Crash, strike, slam, and crackle — it sounds as if the entire center’s roof just crumbled to piece. Thousands jolt. Others flee. Then comes the tender voice, “Searching for a home, searching for a home,” and the gentle sway of the acoustics and bass condensate. It’s just Wilco. “Via Chicago”. This lasts for four hours and 56 more minutes. By the 20th run through, Glenn Kotche is borrowing buckets from the street drummers outside, as his kit sizzles in a corner. Mass hysteria or clever performance art? Who cares. –Michael Roffman


Swans – “The Seer” (at the center of the Guggenheim spiral)

It’d be nice to actually see this little number breathe a little, you know? Thirty-two minutes just never seemed like enough on the album, and their live shows prove that adding a few more minutes of pounding, gnashing, and crushing makes everything better. Putting this burst of cathartic mania through the spiraling vortex of the Guggenheim would surely unlock some sort of otherworldly portal. –Adam Kivel

It’s a rite of passage the first time. But the next 3,000 times some idiot yells “Freebird” between songs at a concert, you want to shove a drumstick up his left nostril (or some other orifice). At a Local H show I attended a decade ago, frontman Scott Lucas implemented a creative strategy for dealing with this annoying request. “You fucking asked for it,” he said before launching into a thundering rendition of the Skynyrd classic that promptly shut the dolt up. My sole criticism is that Lucas only played it for about 10 minutes. Why not six hours? Can we not pass into law that bands are legally obligated to play “Freebird” for six hours whenever someone requests the song at a show? It’ll only have to happen once or twice to end the plague forever; the other inmates, um, concertgoers, will take care of the problem from there. –Matt Melis

Barenaked Ladies – “One Week” (at a Six Flags amusement park)

The world’s tallest, fastest, most dangerous roller coaster has just opened. Its serpentine line snakes across what seems like the entire park, its very end sitting smack in front of the property’s outdoor auditorium. If standing in 99 degree heat for hours sandwiched between sugar-high’d 10-year-olds and loud, drunk teens decked in various blinding neon tanks that read SEX, DRUGS AND DUBSTEP wasn’t painful enough, guess what’s soundtracking your epic pre-coaster wait? Barenaked Ladies chugging out “One Week”. For six straight hours. On the band’s first run-through, it might work as a poppy nostalgic anthem, keeping you pumped and excited — “Yea! I’ll get on this ride soon! Woo!” — but 355 minutes later, you’ll want to gouge your eyes out with a wooden spoon as you angrily mutter, “It fucking FEELS like it’s been one week…” and reluctantly pop a molly with that kid behind you. –Michelle Geslani

Flaming Lips – “Bonus Noise” (in a sewer in Oklahoma City)

Back in the age of “hidden tracks” (1992), The Flaming Lips closed their fifth LP, Hit To Death in the Future Head, with a relentless 30-minute noise loop that fans have christened “Bonus Noise”. It sounds sort of like this — “CCCHRRR!! CCCCHRRR! CCCHRRR! CCCHRR!” — and is arguably useful if you’re a camp counselor or riot control squad member. Ever since the Flaming Lips dipped into the six-hour song sphere with “I Found a Star on the Ground”, I’ve wondered what sort of interstellar revelations would result if they gave “Bonus Noise” the same treatment. –Zach Schonfeld

Slipknot – “Heretic Anthem” (at the grand opening of a Little Caesars Pizza in Des Moines, Iowa)

The masked boys of mayhem, aka Slipknot, are back, and this time they’re helping usher in a tasty new addition to downtown Des Moines. Little Caesars has been offering quality and value since 1959, and for six hours this Tuesday afternoon, you can stop by, grab a slice, and take in some old-fashioned rock and roll tunes from Iowa’s very own homegrown musical heroes. For $5, $5, $5, you can get a personal pan pizza and some bread sticks, sticks, sticks! You’d be a fool to spit it out because a deal like this won’t last long. As always, seniors enjoy half-priced discounts on all Sierra Mist and Pepsi products, while kids under three eat for free. Be sure to stay around after the show and watch the clown tie balloon animals for children of all ages. –Dan Pfleegor

The ultimate battle of wills between everyone’s favorite vegan and the home to what he abhors most: served meats on plates. It would be the ultimate standoff: Who leaves the venue first before the six hours is up? Would it be the former Smiths frontman, after being diagnosed mid-set with a stomach flu? Maybe walking pneumonia? Possibly a recent strain of black plague? Or the disgusted diners, witnessing on the giant screen behind Morrissey the cruel ways in which cows are put to the slaughter? Hey, meat’s meat, man’s gotta eat. –Justin Gerber

Danny Brown – “Outer Space” (in a zero gravity chamber… or at Zero Gravity nightclub for tweens?)

With his perpetual level of highness and a gravity-defying haircut, one can only imagine Danny Brown knows what it feels like to be in outer space. So why not take him there to perform for six hours in a zero gravity environment? I can see the headlines now, “Danny Brown: First Rapper in Space,” with his tongue wagging out per usual in the accompanying picture. The world’s coolest nerd billionaire Sir Richard Branson has his Virgin Galactic looking to make its first commercial flight by year’s end, and what better way to celebrate the occasion than with a high-energy rap performance to take you into orbit?

And if any rapper has the enigmatic personality to win over a group of the world’s richest, all shelling out $250,000 for a trip to space, it’s the giggly loose cannon from Detroit (a place most of the people on the flight will have probably never heard of). Though, if Branson opts for a more Samsung-sponsored artist or someone of that nature, Brown could easily take his spaced-out rap skills to the most popular nightclub for tweens in the Chicagoland area, Zero Gravity. Those kids could use something to bump n’ grind to that isn’t on the Sandstorm Pandora channel. –Pat Levy

Mere minutes before Oasis was set to headline 2009’s V Festival in Paris, temperamental brothers Noel and Liam Gallagher burst into one of their signature backstage brawls. Though Oasis had endured nearly 20 years of the Gallagher brothers’ violent altercations, this particular fracas threw Liam over the edge; by the end of the night, he had quit the band due to the intolerable “level of verbal and violent intimidation.”

Disenchanted with their post-Oasis projects, Beady Eye and High Flying Birds, the Gallagher brothers decide to give their contemptuous marriage one last shot. In a tender and cathartic gesture, Oasis taps gushy, affectionate ditty “Let There Be Love” off the Manchester band’s sixth studio LP, Don’t Believe the Truth. It’s one of just three Oasis tracks to feature both Liam and Noel on lead vocals, so collaboration and reconciliation are in the air. Locking arms tightly and swaying to the comforting melody, the brothers belt in perfect harmony, “Let there be love – Let there be love/ Just remember I’ll be by your side!”

Completely wrapped up in the moment, the band can’t help but play this same tune, over and over, for six hours straight. But just as it appears that resentment and animosity have bid farewell, a salty teardrop falls from Noel’s reddened cheek down onto Liam’s immaculately shining patent leather boots. Enraged by his older brother’s thoughtlessness, Liam socks Noel in the jaw, declares that he could’ve written “Wonderwall” in an hour, and storms offstage. RIP Oasis. Again. –Henry Hauser